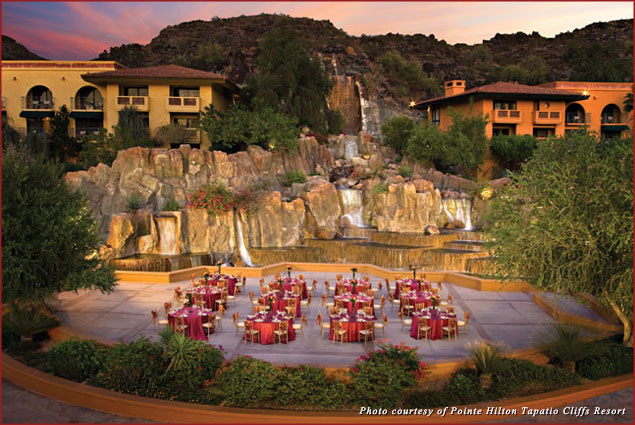 No one would argue that Arizona is unbearably hot in the summer. But, come fall, the air is cool, and the sun is inviting. I had the pleasure of experiencing the “cooler” Arizona (in both senses of the word) this past October when I stayed at Pointe Hilton Tapatio Cliffs Resort in Phoenix. 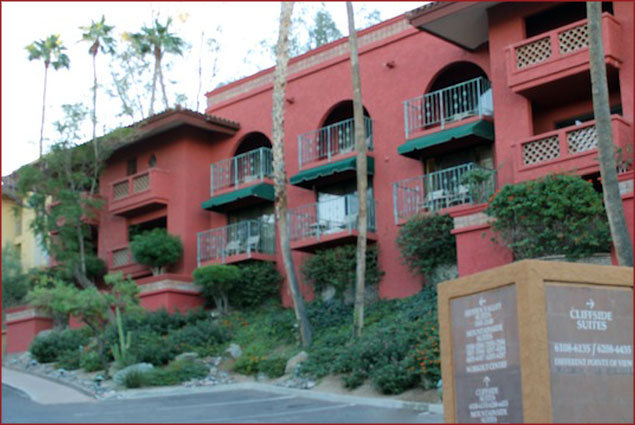 Here’s the lowdown about resort offerings:

Poolside Calm or Adventure: Waterslide Anyone?

If swimming or sunbathing is your thing, Tapatio offers a multitude of pools. It’s as if the resort declared, “No room shall be without a pool nearby.” These oases are generally quiet so you can lie back, throw a towel over your head, and let the pure sunshine lull you to sleep. There is also a snack bar. Score!

If you’re feeling especially frisky, check out the granddaddy of pools: The Falls Water Village. 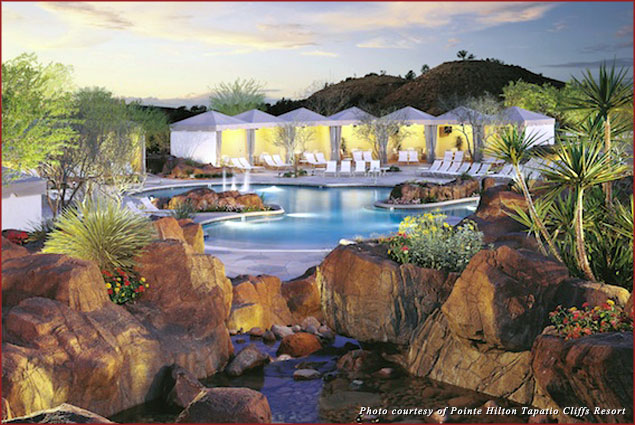 This water fiesta boasts a 40-foot waterfall; two large, free form pools; 23 private cabanas; sun decks; and a 138-foot enclosed water slide. To use the slide a lifeguard must be onsite and, since it was nearly sundown when I visited with no lifeguard to be found, I was unable to partake in the water slide fun, much to the dismay of my inner-child. However, a friend took the plunge and reported it was a bit more than she bargained for. So adults, please take note: enjoy with caution and remember there is no classy way to exit a water slide. Ever. And that’s okay. This sprawling water playground is most definitely what is highlighted in the hotel’s glossy brochure.

A stay in the Signature Suite means access to lofty ceilings with a wet bar, a living room, a dining room, a fireplace, and not one but two bathrooms. 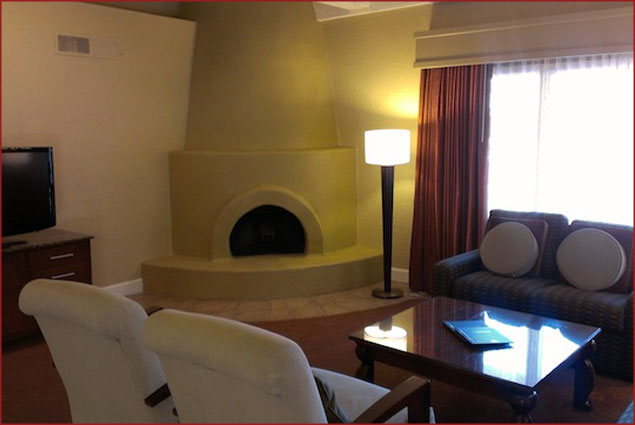 Compared to normal apartment square footage, these rooms easily pass for a small house. Nestled in a bevy of buildings on the cliff side, the hills were alive with the space in my room.

Tapatio Resort’s restaurant offerings are arguably greater than those of a small town. The shining star is Different Pointe of View, which offers upscale American cuisine with Mediterranean influences.

From the patio at Different Pointe of View, the sweeping views of Phoenix took my breath away. Inside, the dining tables had a floor-to-ceiling window display. 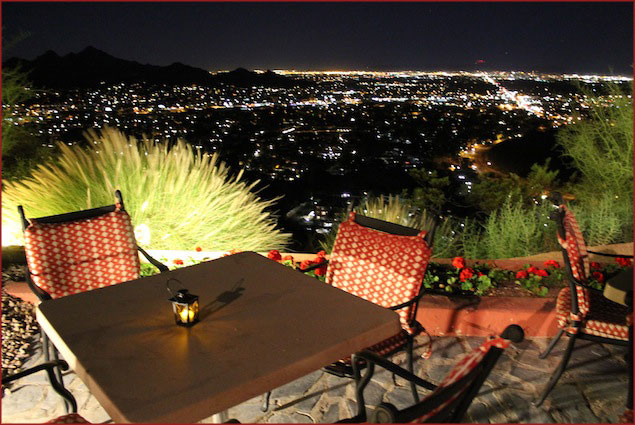 In the Terrace Room, couches and a deep red color spread from the interior to the exterior, echoing the warmth of a sunny city and folding in an October desert ambiance. The quiet brilliance of Phoenix can be taken in with so much pleasure one doesn’t want to leave. Watching the sun set from the roof was unmistakably majestic, with twinkling city lights becoming the new stars in the sky on the ground below. 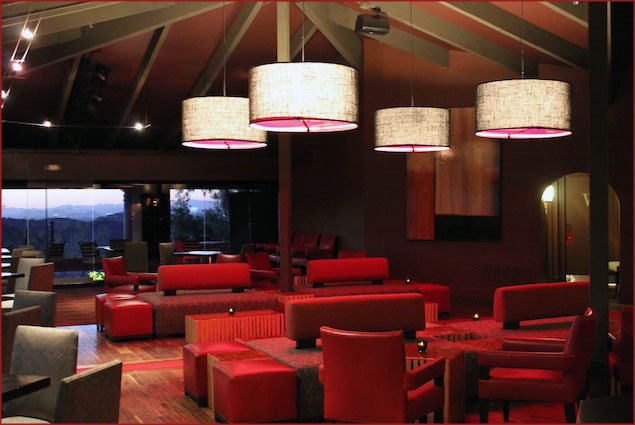 On the night we dined there, both our waiter and sommelier told us they had clocked double-digit years of service with the restaurant, making it seem as though they were part of a Different Pointe of View family. The waiter even joked that he was married there free of charge. 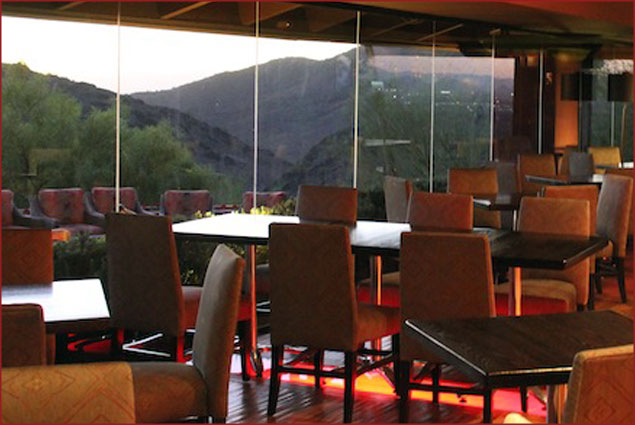 As for the fine dining details, dinner began with pan-seared diver scallops and crispy seared Berkshire pork bellies. The pork bellies exceeded all expectations. Would I write home about them? Yes, and I have. A refreshing strawberries and baby wild arugula salad was followed by a filet mignon entrée that pleased my carnivorous palate.

Sommelier Eric Spragett poured us two hand-selected wines, one of which came from an unknown vineyard in Italy. It was magnifico! He clearly knows his grape varietals, which must come in handy as the restaurant boasts more than 700 wine selections.

For dessert, Different Pointe of View serves a unique mash-up of liqueur-infused marshmallows complimentary to any guest who buys a drink in the lounge. The lounge also features a ridiculously swanky outdoor patio with 360-degree views of downtown Phoenix and a cozy fire pit for roasting … ahem, buzzing.

Each hand-made marshmallow features a different liqueur flavor, including Bailey’s Irish Cream, Frangelico (hazelnut), Amaretto (almond), and Kahlua (coffee), and comes with a variety of dipping sauces such as caramel or vanilla cream. Marshmallow roasters are also equipped with long sticks so as to avoid getting burnt. Be careful roasting as the marshmallows do drip up a storm, and a bib is not included. Those who like booze will like these, although I must say, the taste is acquired.

From the beautiful views to the liqueur-infused marshmallow goodness, it’s no wonder Different Pointe of View was listed as a “Top 10 Mountaintop Restaurant” by Sunset magazine.

The next day for lunch, we drove up the winding greens to Owl’s Nest, a quaint eatery atop the 10th hole of Lookout Mountain Golf Course, a championship par-72 course.

Not a golfer myself, I enjoyed disturbing the golfer’s peace by driving my golf cart with wild abandon. From atop the 10th hole is a lookout with a view of the Sonora desert and Phoenix Mountains. Fortunately, these lands are protected and will maintain their beauty.

At Owl’s Nest, we enjoyed deconstructed smoked Muscovy duck salad, followed by fresh basil and garlic grilled prawns over lemon-scented Parmesan risotto, which is also served at Different Pointe of View as a daily risotto dish.

The pumpkin spice cake and orange cream cheese cremeaux with caramel crunch flakes, salted brown sugar ice cream, and pomegranate molasses pretty much won the contest for best dessert I can ever remember having. More please!

For another dinner option, try Point in Tyme, which offers a decidedly more cozy and woodsy setting than Different Pointe of View. Steaks and seafood are the top entrees, with American fare rounding out the menu.

The resort has shuttles available at all times to drive guests cliffside to any number of the resort’s restaurants. Room service is also available, and there is a Starbucks in the lobby.

Tocaloma Spa & Salon: Play it Safe, Get the Swedish

Tapatio Resort includes the Tocaloma Spa & Salon, featuring massages, body wraps, facials, manicures and pedicures, and hair services. I opted to dip my toe into weird-spa-treatment waters with the Red Wine & Green Tea Body Soufflé. This treatment consisted of red wine, green tea, and vitamin C extract mixed with essential oils and painted on the body. The antioxidants of the mixture supposedly help fight against aging while rejuvenating the skin. Once painted, spa-goers are wrapped in foil before a masseuse gives a head and neck rub while they soak. When it was over, I somehow wanted to go back in time to order the Swedish massage instead. Oh what a pity. Soufflé, schmoufflé!

For a sense of what Phoenix may have looked like 100 years ago, book a trip to the Sonoran desert with Arizona Territorial Adventures jeep tours, owned and run by the colorful Walker Remington.

Remington met us at the Tapatio Resort lobby dressed in a festive adventure outfit complete with neck bandana, adventure hat, mustache, and suspenders. He was full of energy and is clearly passionate about his job. He also looked and sounded exactly like Kevin Costner. Apparently I wasn’t the first person to notice as he often receives this compliment. Chock full of stories, facts, and goofy one-liners, Remington was an absolute pleasure as we embarked on our desert tour.

Roads as rough and bumpy as those on the Thunder Mountain ride at Disneyland led us to the trail. Once we arrived at the Sonoran desert, it was a like a breath of stillness. Now outside the city, if you were quiet, you could actually hear your heart beat. The desert sky was a crisp, bright blue, in sharp contrast to the now polluted suburbs of Phoenix.

To give a sense of how dangerously hot the desert can become, temperatures can reach 145 degrees in sunlight and still be 110 degrees in the shade, according to Remington. The lowest level of humidity ever recorded was two percent. At that level of dryness, a person would lose two pints of perspiration every hour so be sure to drink plenty of water.

Remington told stories of settlers who survived in this desolate environment and also described the history of the tribes who inhabited these lands. From 1861 to 1886, we were at war with Apaches. According to Walker, this was similar to America’s first time in Vietnam since the US army did not understand its enemy or their tactics. Case in point, Jumping Cholla (also known as Teddy Bear Cholla) was a favorite weapon of the Chiricahua Apaches.

Needles of Jumping Cholla are sharper than hypodermic needles, making them the pseudo grenade of their time. The Apaches would hurl these prickly cactus balls at the American soldiers and their horses, quickly taking them out.

The desert award for “Biggest Loser” goes to the Barrel cactus, which typically weighs about 3,000 pounds. These cacti are full of moisture and are very heavy. If there is ever a tornado, hold on to a cactus, as they can withstand extreme winds due to crisscrossing needles that push wind around the plant and allow it to remain standing.

Fun fact No. 2: A cactus leans toward the south or the sun, which can help determine your direction if you are ever lost.

Fun fact No. 3: Cactus arms don’t start to grow until the cactus is approximately 60 years old, and cacti can live up to 250 years.