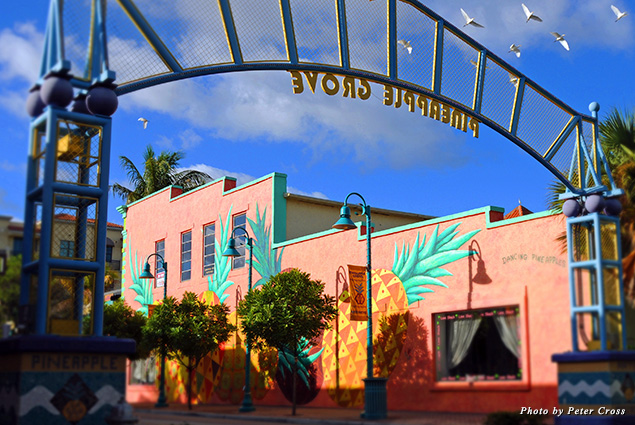 A blend of small town charm and Florida’s famous sunshine, Delray Beach has made waves in recent years for its budding reputation as a resort destination, winning awards including one of America’s Happiest Seaside Towns and Rand McNalley’s Most Fun Small Town in the USA. This self-proclaimed “village by the sea” on Southern Florida’s Atlantic coast has grown exponentially in the past decade and at present lingers in perfect balance between hidden gem and tourist-driven destination. 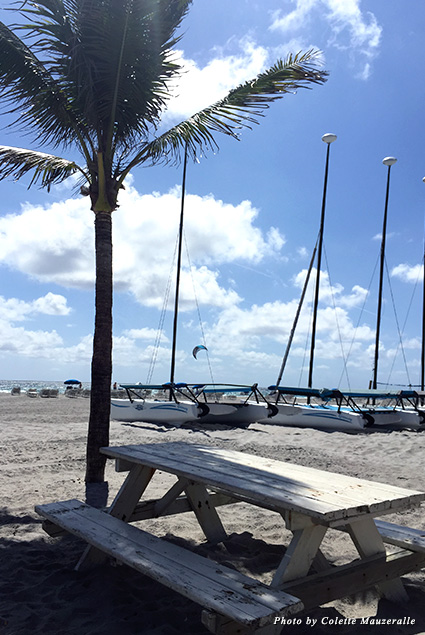 Located between the affluent communities of Boca Raton and West Palm Beach, Delray Beach began as a farming community in the late 19th century. Within a few decades, pineapples became the main crop of the town, which would later inspire the Pineapple Grove neighborhood. Through the middle of the 20th century, Delray Beach became a winter escape for artists and writers, and in the 1970s the main freeway, Interstate 95, was completed between Delray Beach and its famous southerly neighbor Miami, which led to suburban growth. The town’s historic areas began revitalization processes in the last decade of the century, a period of renovation and gentrification that continued into the 2000s; the past decade has transformed the once sleepy town into a haven for visitors seeking art, culture, and thoughtfully crafted dining experiences. 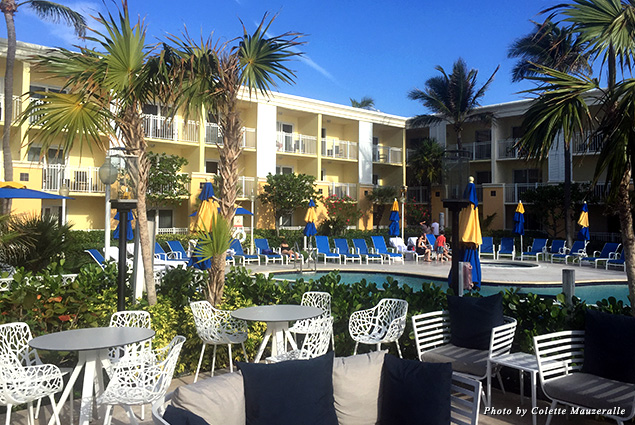 Lodging in Delray Beach is diverse, spanning from city center abodes to beachfront properties. To experience the latter in a swanky-casual style, consider checking in to the Delray Sands Resort, one of the only hotels to offer direct beach access (a pool and Jacuzzi are also on site for those who would skip having sand in their toes). Thoughtful touches such as self-serve citrus-infused water on the pool deck go a long way under the Florida sun, and the resort also impresses with ocean-view dining options and rooms that all face the beach or the pool. 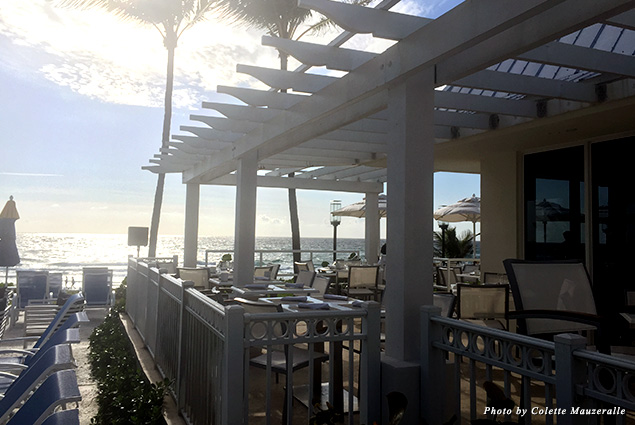 In the very heart of the city, The Seagate Hotel is a chic choice featuring a seamlessly designed restaurant complemented by a 7,000-gallon shark tank. Traditionalists will also find familiar comforts at The Delray Beach Marriott and Residence Inn Marriott, located within walking distance of the beach and Atlantic Avenue.

Just outside of the city center, The Sundy House Restaurant and Inn offers an escape for boutique hotel enthusiasts. This historic building may have once been the home of a former mayor of Delray, but it is now a welcoming abode with 11 rooms eclectically decorated by hand to reflect different cultures of the world. A final option includes Crane’s Beachhouse Hotel, exuding Key West flavor via tropically named rooms and a tiki bar where locals and tourists are known to gather. 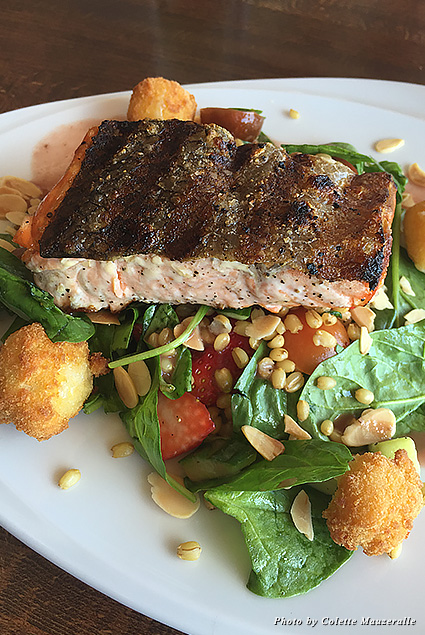 Though it’s a small town with only 61,000 residents, Delray Beach boasts more than 50 restaurants. Each carries its own unique flavor; national chain restaurants are not allowed within Delray Beach’s city center in an effort to maintain small town authenticity (in a similar move, the city also prohibits the construction of high rise buildings in many areas).

Stroll Atlantic Avenue, the heart of Delray Beach’s foodie scene, and take your pick of swanky-casual steak and sushi lounges including Salt, upscale oceanfront dining at 50 Ocean, or zesty international cuisine from Lemongrass Asian Bistro. Between the three lie a multitude of other choices, from traditional American cafés to barbecue joints and fine dining experiences. 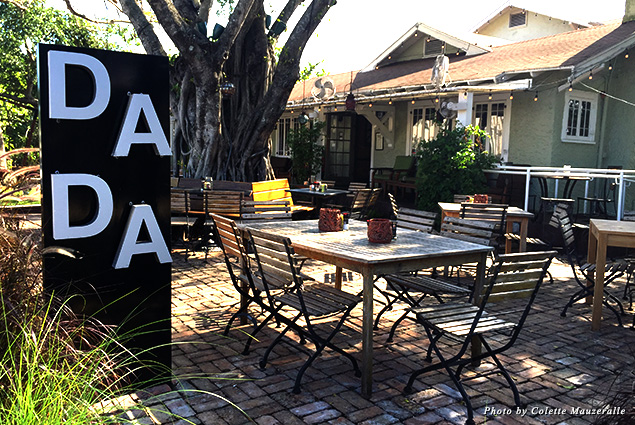 If brews and bar fare are on your wish list, stop into day-to-night watering holes such as the iconic Boston’s sports bar and the outdoor, aptly named Sandbar, known for its sand “flooring” and authentic beach-style partying. And, should social butterflies find a new friend, the moonlit beach is just a short (and perhaps romantic) walk across the street.

A bit farther off the beaten path are two more must-visit gems: Dada, a historic house-turned-eatery with crafty fare (think: bacon-wrapped dates stuffed with goat cheese) and a whimsical garden courtyard, and Latitudes, the newly revamped beachfront restaurant within the Delray Sands Resort that offers specialties such as crab-encrusted Florida-caught grouper and mini coconut cream pies. 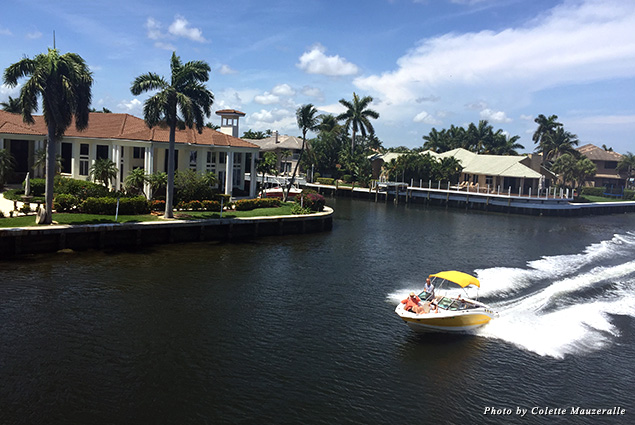 Activities, many based around water and the outdoors, are abundant in Delray Beach. If writing home to say “I’m on a boat” is in your plans, board The Lady Atlantic for a two-hour cruise along the Intracoastal Waterway, a partially man-made route stretching the length of the Eastern Seaboard and lined with multi-million dollar homes belonging to celebrities, Wall Street tycoons, and a wealth of others who appear, to most of us, rich beyond comprehension. 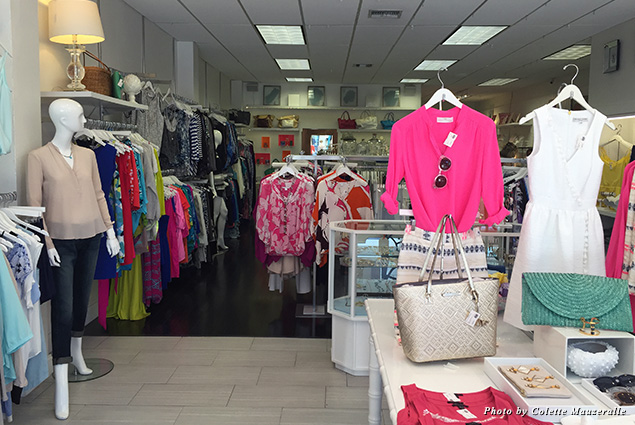 The cruise departs from Veterans Park in the heart of downtown, so shopping along Atlantic Avenue is a natural next-step in the day. Atlantic Avenue is Delray Beach’s main strip, where visitors can peruse the summery, hand-selected collections of boutiques such as Morley and Periwinkle; paint their own pottery during a class at Art-Sea Living; go gaga over baubles and all things shiny at East Coast jewelry store Sequin; and stop into dessert destinations such as Le Macaron or the over-the-top It’Sugar candy shop. While shopping, keep alert to a distinct yellow building standing apart in design; this is the Colony Hotel, a Delray Beach Historic Landmark still in use today. 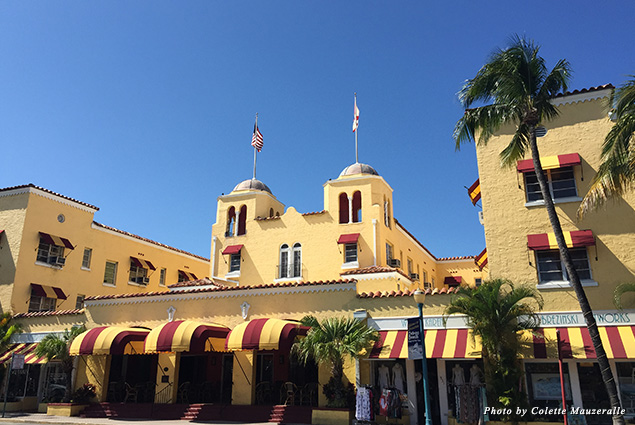 Half a dozen or so blocks down “The Avenue” visitors will bump into Pineapple Grove, the city’s arts district. This is the location of Artists’ Alley, a warehouse where nearly three-dozen established artists’ studios can be found (including that of former “Project Runway” contestant Amanda Perna, a Delray Beach resident who now runs House of Perna). Peruse Artists’ Alley and Pineapple Grove for a variety of paintings, sculptures, photography, fashion, and more treasures to take home—all the while knowing whatever you purchase here is most likely to be one of a kind.

Art and culture also exude from the Delray Center for the Arts’ Cornell Museum and Crest Theatre in the city’s Old School Square. Here, a two-level auditorium built in 1924 offers vibrant plays and musical performances, while outside the theater the halls are lined with a variety of artwork. The grounds are also home to a vintage gymnasium build in 1925, which can be seen in its original form via displays at the north end of the Crest Theatre. Across the lawn—and an outdoor pavilion that hosts all of Delray Beach’s major outdoor festivals (around 17 street festivals occur along Atlantic Avenue alone each year)—the Cornell Museum is a dynamic gallery with world renowned artists, a stark contrast to its interesting location in what was once the city’s elementary school.

A short drive from the bustle of Atlantic Avenue is the tranquil Morikami Museum & Japanese Gardens, a 16-acre expanse featuring six distinct Japanese-style gardens. Educational exhibits inside the museum and throughout the garden celebrate and enlighten visitors on the influential Japanese population that helped settle Delray Beach during its early pineapple farming days.

Another outdoor stop is the Gumbo Limbo Nature Center, a sea turtle rehabilitation center where all ages can get up close and personal with these endangered animals that nest on local beaches each year between March and September. The center, which suggests a small donation for admission, also features a diverse butterfly garden and a boardwalk that winds between thriving mangroves.

And of course there is the beach itself, a stretch of soft coastline flanked by the warm waters of the Atlantic and dotted with palm trees and an abundance of volleyball nets. Boat and board rentals are available from Richwagen’s Delray Bike & Sports, which, as the name entails, also provides bicycle rentals—a great way for getting around town in style and staving off the calories bound to result from Delray Beach’s irresistible dining scene.

Those traveling to Delray Sands by air can fly in via Palm Beach International Airport or Fort Lauderdale-Hollywood International Airport; the two are 20- and 40-minute drives from the city, respectively. Once in town, try your hand at using The Downtowner, a tips-only transportation service that picks up riders from anywhere within the city. For the more traditional set, Uber and taxi services are also never far away.

Delray Beach’s high season is just when most would expect, given its location in steamy Southern Florida. Visit between October and the start of April for the most tolerable temperatures, and remember that while sandals, sundresses, and shorts are key, a wrap may come in handy for air conditioned lobbies and restaurants.

Given its quaint size, Delray Beach is a surprisingly multi-faceted community with a diverse set of people, activities and sights. It is a rarity in being one of South Florida’s last remaining under-the-radar destinations, and perhaps because of this Delray Beach’s vibe is charmingly casual and always centered on having fun. Whether flying in for a few laid back beach days or attending one of the town’s festive celebrations, Delray Beach offers an entertaining time for all who step onto its shores.