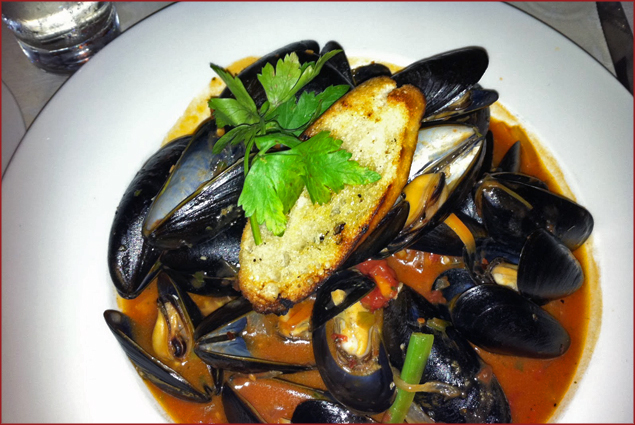 You might recall that in my list of Top Ten Bites of 2011, a certain meal at Da Maurizio was included. It was such a great dining experience that I had to share the whole meal with you, so here it is:

A few weeks ago marked my man and my one-year anniversary (insert “awwww” here). I had a hefty gift certificate for Da Maurizio and we were saving it for this special night. We had to save it even longer too, since this girl got sick on the special day.

And so, we finally had our celebratory meal a month later – which was fine by me, really, because I could actually enjoy it at that point. And so, a Saturday evening, one month later, we finally made it to the resto at about 8 pm. Of course, I already knew exactly what I was having. Yup – I called ahead to make sure that a particular menu item in a photo on the website could be made!

Once we were seated, we chose two vodka martinis to start the night while we looked over the menu. Mitch decided on the prix fixe, a great deal at just $39.95 for three courses! As I said, I planned my meal in advance and did so in order to save room for the tiramisu. I’m not normally a dessert fan, but I decided that after a meal at DM, tiramisu would be essential! I ended up ordering two apps – which I often do lately – as I leave a resto feeling fully satisfied, as opposed to FULL.

Mitch started off with the mussels – a lovely dish. They were served in a luscious tomato-based broth and topped with some crusty bread. All of the mussels opened and they were tender and succulent – not like many of those I’ve had often, which have been chewy and unopened. While he enjoyed the crustaceans, I ordered the calamari…and they were incredible! Light, crispy and with a wonderful, deeply flavoured chunky tomato sauce, it was definitely the best plate of calamari that I’ve ever had in Halifax. 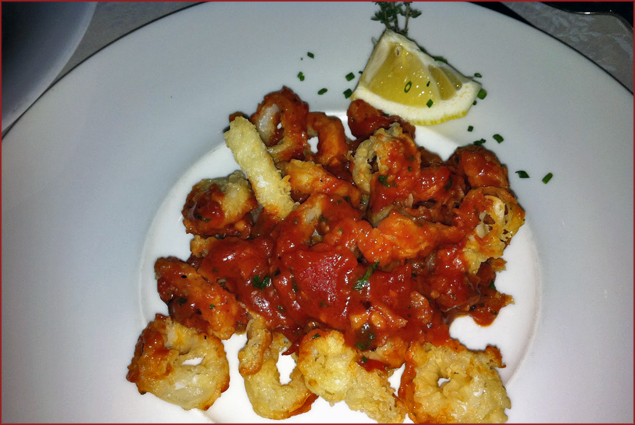 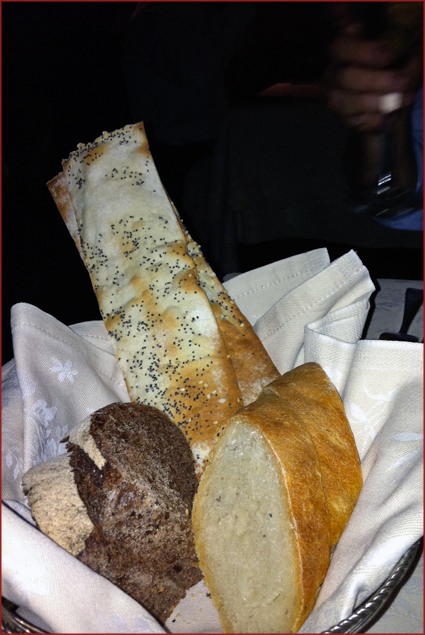 When it came to the entrees, I decided on a second-plate size of polenta con fungi; a bed of polenta topped with mixed mushrooms in a demi-glace. It. Was. Incredible. The fact that something so simple could be so delicious is outstanding. The polenta was rich, creamy, and kissed with a touch of Parmesan, while the mushrooms were succulent, tossed in the rich demi glace. I’d go back for this meal a thousand times over.

While I died and went to polenta heaven, Mitch had a spectacular Bolognese. There were about five entree choices for the prix fixe, and he asked our server to surprise him for the main. He was quite happily surprised by the al dente penne tossed in the luscious Bolognese sauce with beautiful ground veal. Needless to say, I’ll take ground veal over ground beef any day. 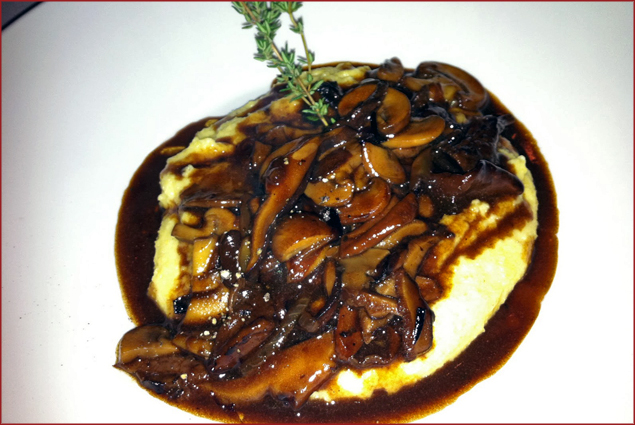 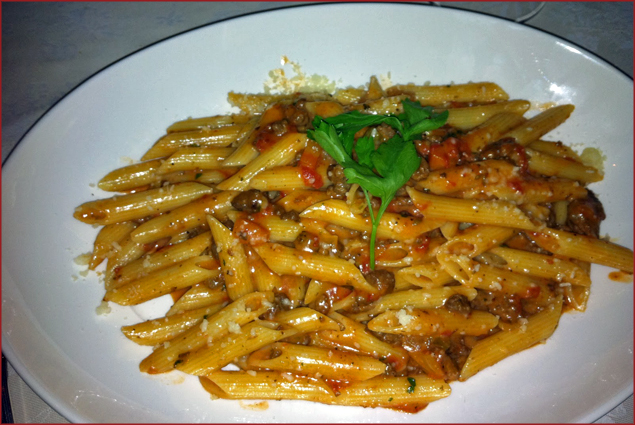 And so, the moment that I had been waiting for arrived; dessert! My tiramisu was excellent. Booze-soaked cake sat layered with the lovely mascarpone mousse and whipped cream. The dessert was slightly mushy – in a good way, while the dark chocolate shards on top provided a nice crunch. For his dessert, Mitch chose an incredibly rich chocolate torte – a bit too rich for me, but he managed to finish it! Perhaps it was the specialty coffee that helped! I suppose I could describe the torte almost like a chocolate pate. 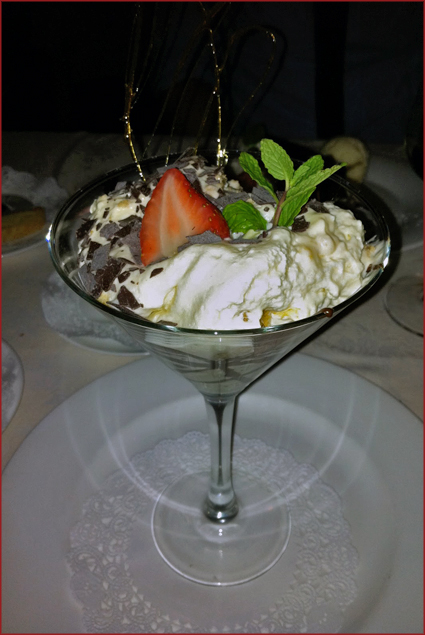 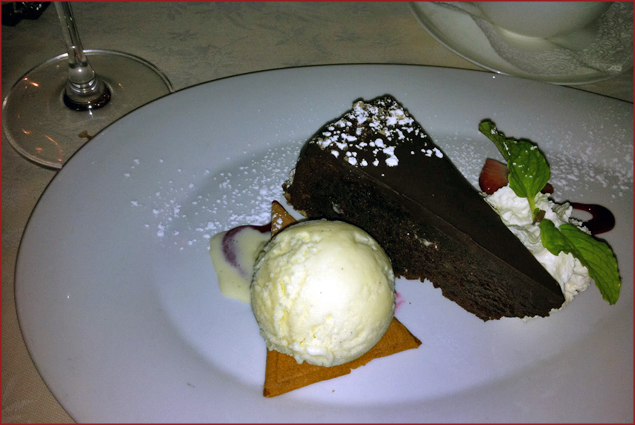 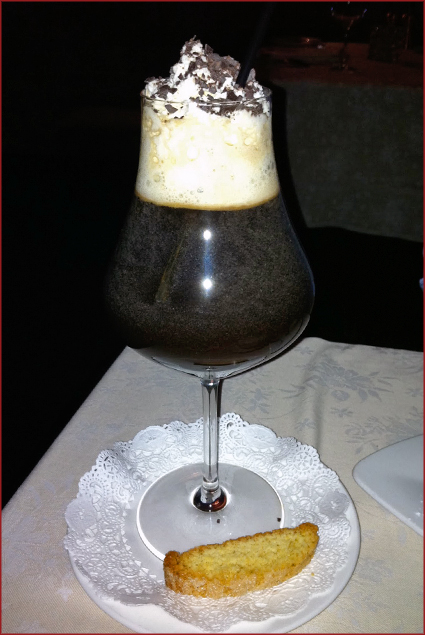 This was a fantastic dinner out to a resto that I hope to visit again very soon. Not only was the food delicious, the atmosphere here is intimate and personal and it was just what we were hoping for on our special night.