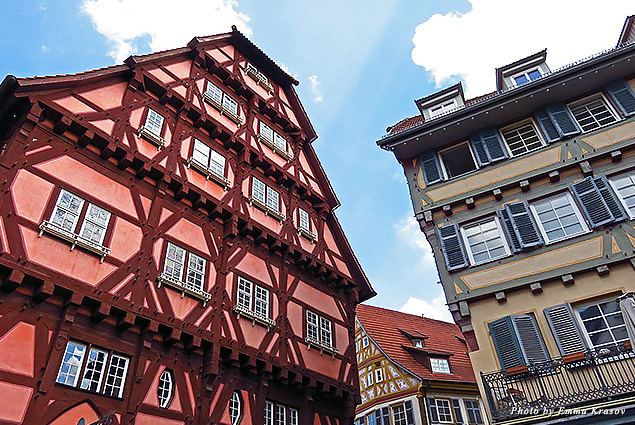 There are dozens of cities and little towns along Germany’s so-called Deutsche Fachwerkstraße (German Timber-Frame Road), a tourist route showcasing the traditional historical architecture developed in the 13th to 19th centuries. The Baden-Württemberg part of the road is especially picturesque, with thousands of timber-framed structures in stunning landscapes of rocks, gorges, and forests. With their characteristic wood-skeleton bases and curtain walls made of brick or clay, these houses vary in size, construction style, and the use of decorative elements, but invariably emit romantic charm and evoke the images of European fairy tales.

The regional timber-frame route in Southern Germany that stretches from river Neckar to Lake Constance is covered with fertile farmlands, vast forests, and green mountainous valleys studded with Alemannic and Franconian style buildings. Bietigheim-Bissingen, at the confluence of the rivers Enz and Metter, unites two little towns in one. Surrounded by vineyard-covered hills of the Neckar Valley, the double town is steeped in more than 12 centuries of history, with Middle Ages and Renaissance buildings, often enlivened by ivies and climbing roses, abundant in the city center. 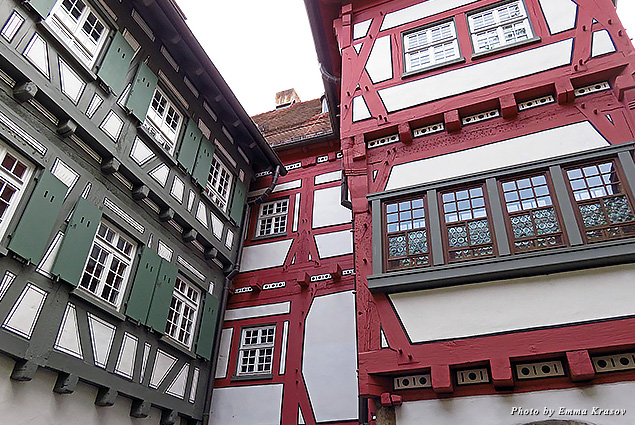 Besides the handsome half-timber city hall built in 1507, with asymmetrical tower, the round mayor’s balcony, and the external baroque stairway, Bietigheim-Bissingen has a 1536 family home, now Municipal Museum Hornmoldhaus, a massive timber-frame building with thoroughly preserved period paintings decorating the inside walls and ceiling. 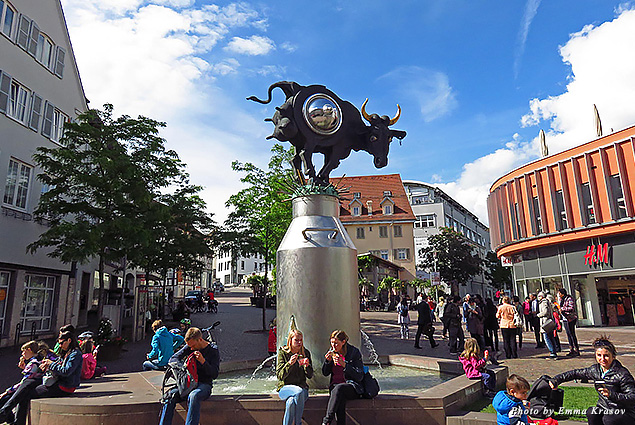 Contemporary art pieces adorn the streets and squares of the clean, well-kempt town. Here, in the middle of Kronenplatz I met Ku(h)riosum, a wild-eyed ku (cow) created by sculptor Jürgen Goertz.

On a side street I saw a group of corpulent town gossipers—Schwätzweiber by Karl-Henning Seemann.

On the façade of Villa Visconti there are many familiar faces—Mother Teresa, Columbus, Charlie Chaplin, and Stephen Hawkins. In front of the red brick façade is a sculpted portrait of Le Corbusier.

In Besigheim—reportedly the most beautiful wine village in Germany, known for the local red wine trollinger—I had a gastronomical encounter of the most delicious kind. At a Swabian cuisine restaurant Ratsstüble, I tried maultaschen, delectable dough pillows stuffed with mixed meats, onion, and spinach. Their invention is attributed to the medieval monks of the Maulbronn monastery nearby. Presumably, on days of abstinence the monks were trying to conceal the meat inside the dough to hide it from the all-seeing eye.

Schorndorf is called die Daimlerstadt (the city of Daimler). Gottlieb Daimler—the legendary inventor of the small, high-speed internal combustion engine that gave start to the automotive industry—was born in 1834 in a timber-frame house on Höllgasse 7, where there’s now a museum dedicated to his family history and his engineering genius. 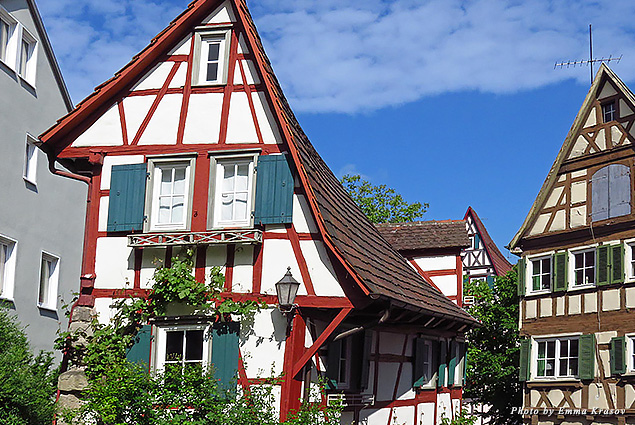 In Schorndorf, all tourist groups necessarily stop by a tiny, crooked, timber-frame house that dates back to 1730. The “House on the Wall” is literally tied to the ancient city wall built in 1265. While the city was growing and expanding, the new wall was built along its outer limits, and industrious citizens used the old one to serve as a backbone for their newly built homes.

Esslingen am Neckar has a recorded history since year 777, and the entire street has some of the oldest timber-frame houses in the country. One of them was built in 1261. More than 200 timber houses from the 13th to 16th centuries are crowded in the old city center around the majestic red-walled Renaissance Old Town Hall with the original astronomical clock.

One of the largest in Southwest Germany, the gothic Church of St. Dionysius, which is also a museum, still dominates the Market Square today. Its highlight: enormous awe-inspiring, masterfully crafted stained glass windows. 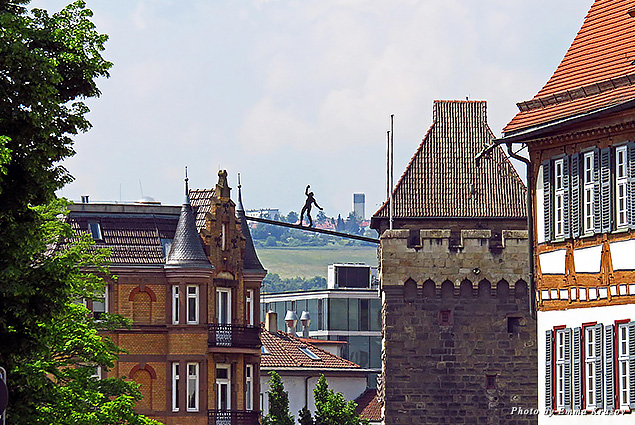 In Esslingen I met a tightrope walker—a contemporary sculpture visible above the city skyline. It’s called Arrival and symbolizes the medieval town’s tradition of newcomers supporting themselves for a year before being considered the citizens of Esslingen.

In 1486, the town council declared that the trade of Esslingen was based entirely on wine. Sekt-Kellerei Kessler, Germany’s oldest sparkling wine producer is located in a 1,000-year-old former monastery building. Georg Christian Kessler, who founded his cellars in 1826, learned méthode champenoise from the widow Clicquot herself, whom he met while visiting Reims, France. Among other things, he learned from Veuve Clicquot the exact size of a champagne bottle—allegedly established by Napoleon, who considered it a perfect size for a man.

Weinkeller Einhorn restaurant in one of the winding cobblestone streets of Esslingen serves Swabian specialties, accompanied by Pilz beer in ceramic steins. 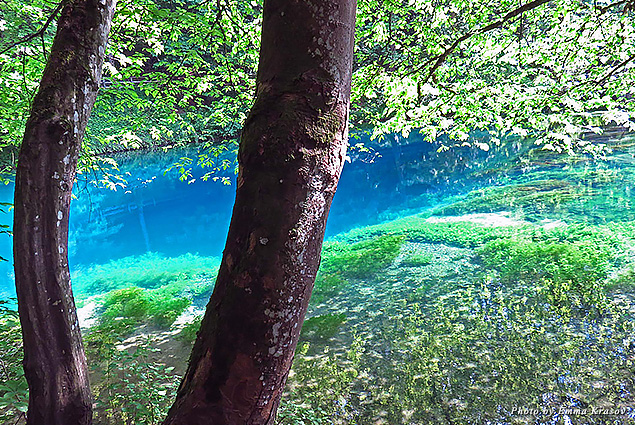 An incredibly blue body of water in Blaubeuren is called Blautopf (blue pot). It has a peculiar shade of blue that most closely resembles a color of blue eyes—just like Schöne Lau (beautiful water nymph) would have. She comes from a 19th century fairy tale written by Eduard Mörike who used to visit Blaubeuren and was very impressed with the blueness of Blautopf. His heroine with flowing black hair, big blue eyes, and webbed fingers and toes lived at the bottom of the pond, until one day she ventured outside to meet the locals and make friends with human women.

Blautopf is very deep (69 feet), funnel-shaped, and formed by an underground spring, coming from a giant limestone cave underneath Blaubeuren. Unsurprisingly called Blauhöhle (blue cave), it’s been discovered only recently; it is extremely dangerous and open strictly to the professional speleologists and divers.

On the banks of the Blautopf there’s a circular trail meandering through the leafy forest with limestone rocks sticking from the ground. It leads to a quaint old mill, reflected in the mirror surface of the pond, and a former Benedictine monastery founded in 1085.

Digging deeper into the area’s past, the Museum of Prehistory Blaubeuren displays a small mammoth ivory figurine—the oldest ever found—a representation of a woman approximately 42,000 years old called the Venus from Hohle Fels (Hollow Rock Cave).

The medieval town center of Blauberen is one of the best preserved in Germany, with a 1425 timber frame Town Hall, a mill quarter by the river Blau, and hospitable little inns and shops lining the narrow cobblestone streets. 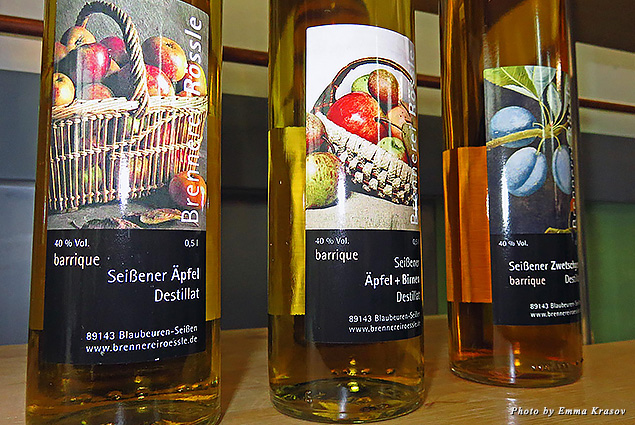 At a tiny local distillery, Brennerei Rößle, I met a husband-and-wife team, Elke and Daniel Rößle, who produce delicious schnapps and liqueurs made with the old regional species of apple, pear, plum, peach, and berries from 80-year-old orchards.

At the Ochsen Hotel restaurant, I enjoyed a seasonal plate of white asparagus generously supplemented with sourbraten in mushroom gravy and new potatoes. Everything is more delicious with German beer!

Biberach an der Riß is a medieval settlement of weavers, tanners, and other craftsmen who lived in half-timbered houses lining the hilly streets. Here I met Margret, the wife of a master weaver. Dressed in a period costume, she led a walking tour of the restored neighborhood of Weberberg, where at the beginning of the 16th century there were at least 400 active looms.

St. Martin’s Church, built in 1337 and one of the oldest in Germany, is called “simultaneous.” Originally Catholic, it was turned Protestant after the Reformation, but it has been used by both denominations since 1548. 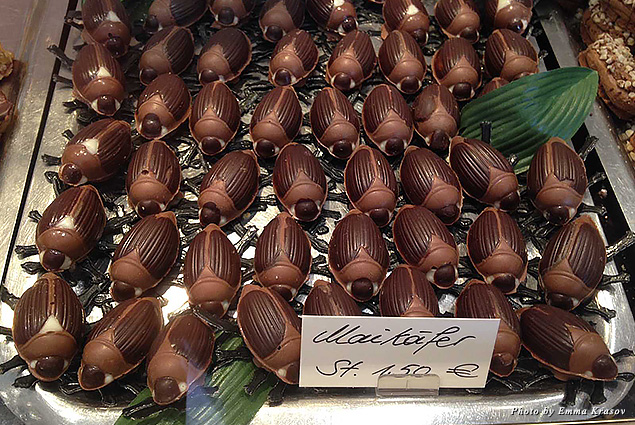 Like so many towns along the road, Biberach has a burgeoning restaurant scene. Conditorei Café Confiserie Kolesch offers an enormous menu of cakes and confections, among them chocolate cockroaches and other sweet bugs.

In Pfullendorf, located between Danube and Lake Constance, I met a “town robber” dressed in colorful rags. He started his walking tour of the town by the Upper Town Gate Oberes Tor and introduced all the landmarks: Church of St. Jakobus, built in 1481; Altes Haus, built in 1317; Steinscheuer, a stone barn from 1515 (a great illustration to the old German saying “stone-rich,” referring to those who could afford it); and Rathaus, built in 1524. A stop at Restaurant Felsenkeller is a must. Among the signature dishes are seasonal asparagus soup and a whole ham baked inside a loaf of bread.

Meersburg is a gorgeous lakeside town overlooking Bodensee (Lake Constance). Panoramic views of the sea-like lake and its vineyard-covered banks open from the old park that surrounds the baroque Schloss Meersburg. 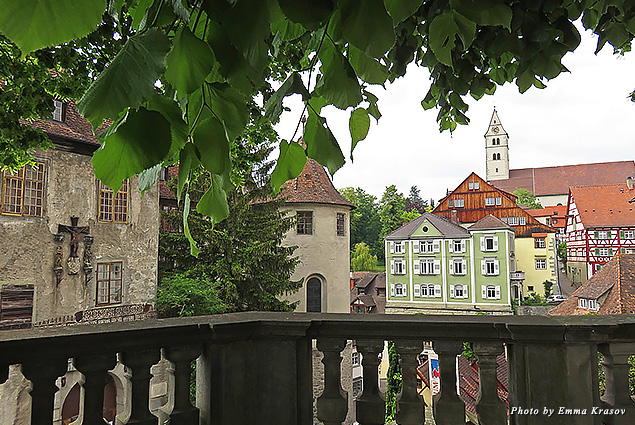 Tourists flock to the town to engage in sailing and picnicking, or to take part in a wine-tasting session with certified sommelier Karin Streng at the Staatsweingut Meersburg and have a farm-to-table dinner at the neighboring Restaurant Gutsschänke.

The city center is a quintessential Timber-Frame Road town, with a cluster of historical buildings from all time periods. I was here on a Saturday, and so I met a wedding procession walking from an uphill church with festively tolling bells down Kirchstraße.