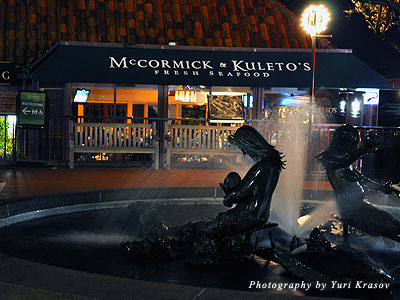 A San Francisco staple, an industry giant, and a tourist attraction in a class of its own, McCormick & Kuleto’s Seafood Restaurant in Ghirardelli Square claims that the views of the Golden Gate Bridge and Alcatraz from its every window, plus a versatile ambience and customized menus set it apart. In reality, what defines a 20-year-old institution’s evergreen appeal is its endless creativity.

Receptions with raw bar of fresh local shellfish; banquets and meetings with everything from dim sum to kebabs; lavish happy hour offerings, and kids’ menu with grilled salmon and shrimp Louis are just a few things on top of cocktails of the month, margarita Thursdays, Buck a Shuck Wednesdays, and whatnot besides just seven days a week lunches and dinners. 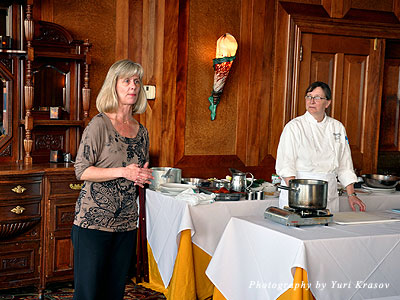 This time, M&K came up with a Cooking Class with Chef Liz, namely the restaurant’s Executive Chef Liz Ozanich, one of a few female execs in the Bay Area, who was introduced by GM Mia Harriman as “a French-style cook and our own Julia Child” at the start of the class. 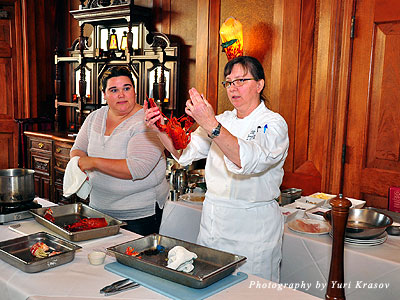 And then the magic began. For our first course, Chestnut and Artichoke Wonton Ravioli with Maine Lobster, we had to learn how to handle the lobster.

Not a shabby cook myself, I got to admit that lobster per se has never been my strong point. I’ve never tried to cook and serve it myself that is.

Chef Liz held a boiled lobster high enough for everyone to see how to twist out the tail, break off the fins, crack the shell with a sturdy knife, and open it up like a book. 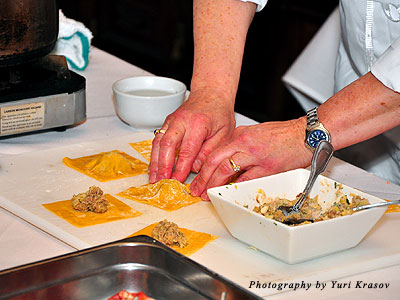 She shared a secret to fast-made gourmet ravioli: store-bought wonton wrappers and canned chestnuts and artichokes. 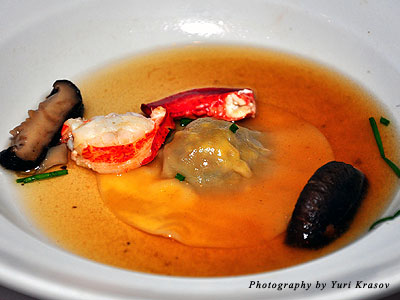 While deglazing a pan after sautéing shells for a lobster porcini stock, she advised the class, “Don’t use expensive wine – it’s a waste.” For our second course, Petrale Sole Veronique, our chef introduced the class to a slotted fish spatula that wouldn’t break the delicate flesh; explained how to keep butter soft, but not melted, and addressed the utility of canola oil for cooking vs. olive oil for salad dressing. 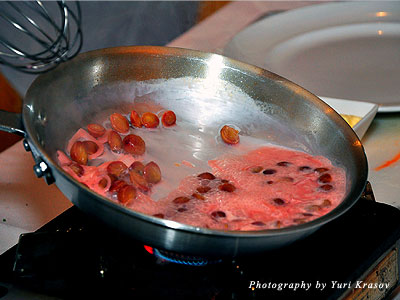 She also cooked red grapes in cream and butter for an unexpectedly delicious sauce to pour over the fish. 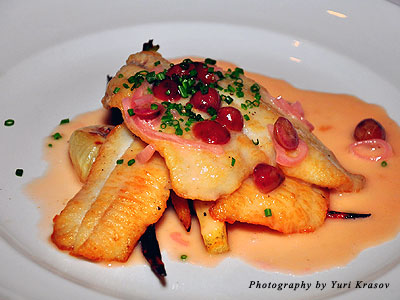 Finally, our dessert of Port and Dried Fig Compote with Double Rainbow Ice Cream and 30 Year Aged Balsamic was accomplished by bringing to boil port and sugar, adding figs and vanilla bean, simmering for 30 minutes, cooling and spooning the mixture over ice cream, and then drizzling it all with that precious aged balsamic. 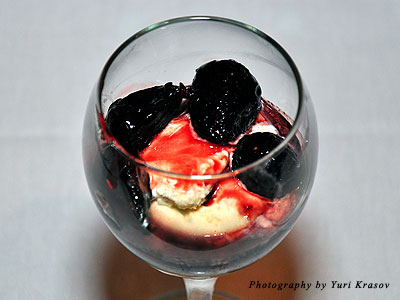 Since this March class happened to be the first one, was supposed to evaluate the idea, and got sold out early, more classes with Chef Liz must be in the planning.

The best way to learn about upcoming cooking classes would be to get on M&K’s email list while visiting their website.