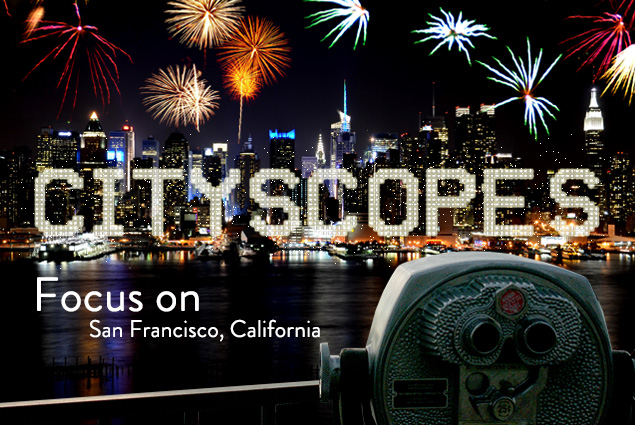 So much can be said about San Francisco, the City by the Bay. The only consolidated city-county in California, San Francisco is the most densely settled large city in the state and the second-most in the United States after New York. Spanish colonists founded “St. Francis” in 1776, establishing a fort at the Golden Gate and a nearby mission named for St. Francis of Assisi. In 1849, the Gold Rush brought a flood of new residents, and San Francisco received its consolidated city-county status in 1856.

A devastating earthquake and resulting fire devastated San Francisco in 1906, taking approximately 3,000 lives and destroying more than 80 percent of the city. Residents quickly rebuilt, hosting the Panama-Pacific International Exposition just nine years later. Some of the rubble created by the earthquake and fire became the foundation for the Fisherman’s Wharf, which was a main entry port to the city and a hot spot for industries including fishing, construction, and railroads.

The wharf has since grown into a major tourist attraction. Though it is still known for its fresh seafood, the fare can now be found at small stands, at chain restaurants, and at eateries owned by the same family for decades. The wharf is also the location of Pier 39, a shopping center and home to a sea lion colony, as well as the Aquarium of the Bay and the San Francisco Maritime National Historic Park.

As you can see already, San Francisco is chock-full of notable buildings, streets, and neighborhoods. You can’t miss Coit Tower, which stands tall atop Telegraph Hill in honor of benefactor Lillian Coit. Lombard Street is famous for its block-long stretch of eight hairpin turns between Hyde and Leavenworth. The Castro District, one of the first gay neighborhoods in the United States, is a prominent LGBT symbol and a host location for activism and events. Colorful Victorian and Edwardian houses, dubbed the “Painted Ladies,” line streets throughout the city, the most famous of which appear on Steiner Street, across from Alamo Square. 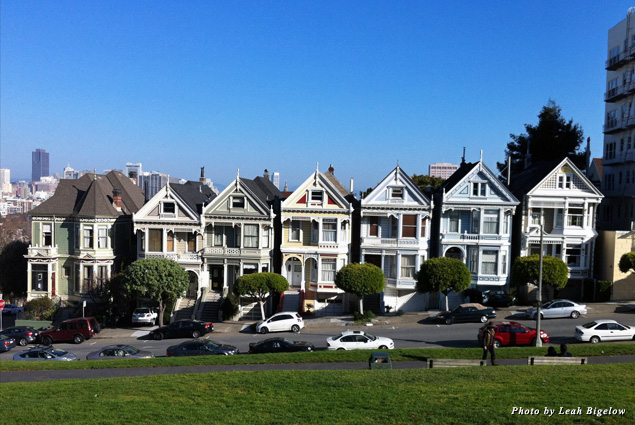 Of course, it can be argued that nothing says “San Francisco” more than the Golden Gate Bridge. Opened in 1937, the suspension bridge spans 8,981 feet and its towers rise 746 feet above the water. Chief engineer Joseph Strauss worked with residential architect Irving Morrow, who designed the overall shape of the bride towers and the Art Deco elements, and New York’s Manhattan Bridge designer Leon Moisseiff, who envisioned the bridge’s suspension design. Today, drivers, bicyclists, and pedestrians cross the international orange-hued bridge that spans the Golden Gait strait, connecting San Francisco and Marin County.

One of my favorite ways to view the Golden Gate Bridge is by boat. Blue & Gold Fleet offers a Bay Cruise that takes sightseers underneath the bridge and back again. The narrated cruise provides an excellent overview of the city and its history during the hour-long, Kodak-moment-filled ride. Tickets for the tour are not only available at the Blue & Gold Fleet kiosk at Pier 39 but also through CityPASS, a discounted ticket booklet for select attractions throughout the city. 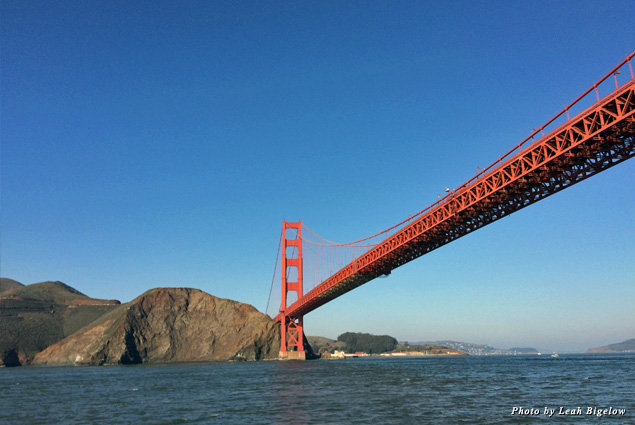 The Golden Gate Bride isn’t the only sight that stands out in the San Francisco Bay. Alcatraz Island is the site of the first lighthouse and United States fort built on the West Coast and also serves as the location of the infamous federal penitentiary. From 1934 to 1963, the island was a prison for racketeers, kidnappers, and difficult-to-manage inmates sent from other institutions. Its remote location meant the prisoners stayed put one-and-a-half miles from the city and its residents, though a total of 36 inmates reportedly attempted—unsuccessfully—to escape.

Alcatraz Island received designation as a National Historic Landmark in 1986 and is now operated by the National Park Service. Alcatraz Cruises, which leaves from Pier 33, ferries curious travelers to the island for daily tours of the historic buildings that remain.

Heading farther into the San Francisco Bay, the Bay Bridge links San Francisco and Oakland. The bridge opened to much fanfare in 1936 (just six months before the opening of the Golden Gate Bridge) and became a preferred way for residents to travel from the city to the East Bay. It now carries nearly 250,000 vehicles on its two decks daily. In March 2013, artist Leo Villareal’s Bay Lights installation illuminated the Bay Bridge. Though the light sculpture is scheduled to go dark this March, there is a plan to reinstate the installation in early 2016, in collaboration with the State of California. 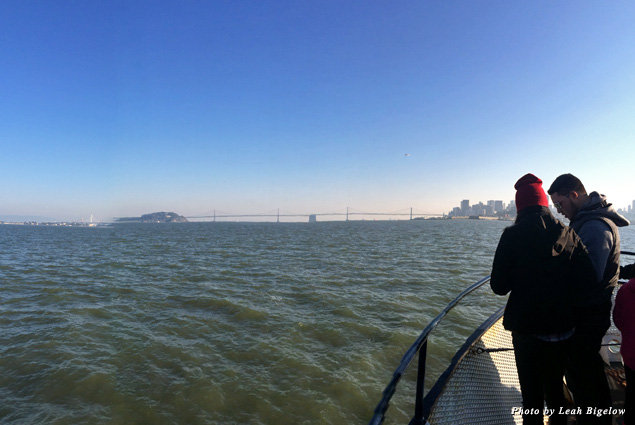 The Bay Bridge’s newly completed Eastern span replacement connects to the marina and bikeway to Treasure Island, a man-made landform built in the San Francisco Bay for the 1939 Golden Gate International Exposition. The California Historical Landmark is home to a naval station and auxiliary air facility; beginning in the late 1980s, its old aircraft hangers were used as sound stages for television and movie productions. New residences have been developed on Treasure Island since the turn of the century, and the island is also at the forefront of San Francisco’s growing urban winery movement.

Another iconic San Francisco site that stemmed from a World’s Fair is Golden Gate Park’s Music Concourse, an open-air plaza, which was originally excavated for the California Midwinter International Exposition of 1894. In addition to the site’s stunning Spreckels Temple of Music (also known as the Bandshell), cultural institutions including the M.H. de Young Memorial Museum, the California Academy of Sciences, and the Japanese Tea Garden are the main attractions at the plaza. 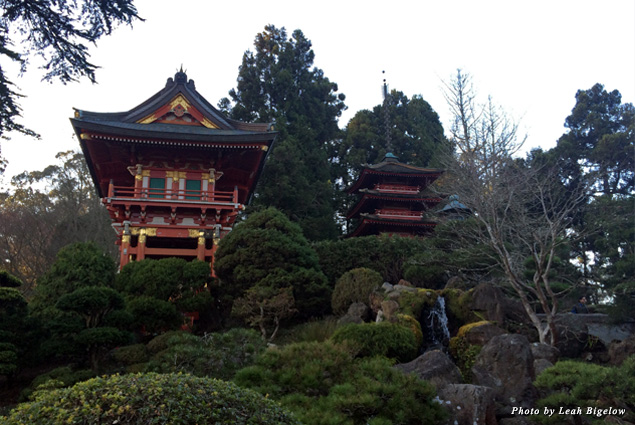 Golden Gate Park as a whole spans more than three miles east to west and about a half-mile north to south—20 percent larger than New York’s Central Park. The idea for the park began in the 1860s, with field engineer William Hammond Hall and his assistant John McLaren developing a survey and topographic map of the site in 1870. Carved out of sand and shore dunes in what was then known as Outside Lands and filled with blue gum, Monterey cypress, and Monterey pine trees, Golden Gate Park has grown to feature naturalistically landscaped lakes, a 1914 carousel, and statues of historical figures including Francis Scott Key, Beethoven, and President Garfield. Today, Golden Gate Park attracts 13 million visitors annually, who flock not only to the Music Concourse but also to such attractions as the San Francisco Botanical Garden at Strybing Auditorium, Strawberry Hill, and the bison paddock.

A sliver of Golden Gate Park called the Panhandle sits above Haight-Ashbury, an intersection famed for its place in hippie subculture. Pioneer and exchange banker Henry Haight and San Francisco Board of Supervisors member Munroe Ashbury both held influence in the planning of the neighborhood as well as in the planning of the nearby park. The site began as a collection of farms and sand dunes and, in the late 1880s and early 1900s, evolved into a residential upper-middle class homeowners’ district with the help of a new cable car line. It was hit hard by the Depression, large Victorians were divided into apartments to house workers during World War II, and many buildings were left vacant afterward. This set the stage for a bohemian invasion, when the hippies of the 1960s flocked to the Haight-Ashbury neighborhood and took advantage of the cheap rooms and rentals.

Though the hippie influence still lingers in businesses along the Haight-Ashbury streets, a new scene has moved in. The section known as Upper Haight now boasts hip restaurants, high-end vintage boutiques, and Internet cafés, while its grittier neighbor Lower Haight attracts DJs, ravers, and music lovers with its record shops and clubs. 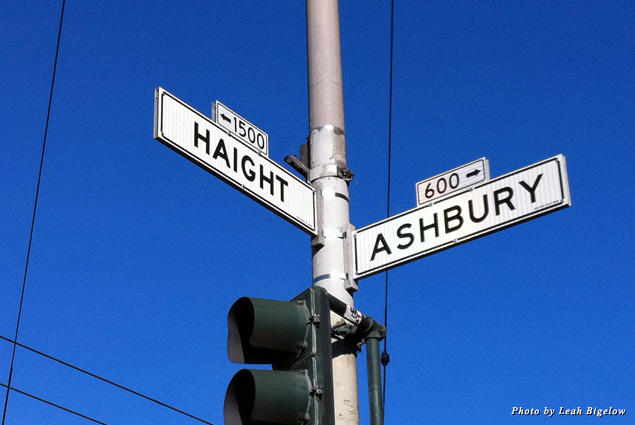 Many groups, be they formed by similar interests or ethnicities, have made their home in San Francisco. The city’s Chinatown was established in 1848 and holds the titles as the oldest Chinatown in North America and the largest Chinese community outside of Asia. Located in downtown San Francisco, the microcosm of Asian culture retains its own languages, customs, and places of worship. It is one of the city’s most popular stops for visitors, attracting more people annually than the Golden Gate Bridge. 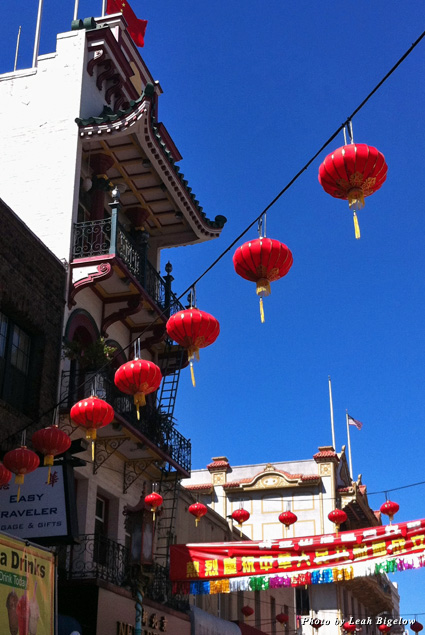 Another hot spot for visitors to San Francisco is Union Square. The busy shopping hub was built in 1850 and became a gathering place for pro-Union demonstrators in the time leading up to the Civil War. John Geary, the city’s first mayor, named the park in honor of the rallies. The square still serves as a gathering place, drawing visitors and locals not only to the luxury, boutique, and department store shopping options but also to the surrounding theaters, art galleries, and hotels.

Though the city now serves as headquarters for several major banking institutions and well-known tech companies, including Yelp, Pinterest, and Twitter, its oldest continuously running company is all about the bread. Boudin began in 1849 as a tiny, Old World bakery; it has grown into a sourdough bread-baking empire with locations throughout California. Its establishment lined up perfectly with the city’s influx of gold-seekers, and residents and prospectors fell for the fresh-baked loaves of sourdough French bread. In 2005, Boudin opened a 26,000-square-foot facility at the Fisherman’s Wharf, which includes a demonstration bakery, market, café, bistro, full-service restaurant, and museum and bakery tour.

After a hearty bowl of clam chowder in a Boudin sourdough bread bowl (a must), head to Ghirardelli Square for some chocolate dessert. Domingo Ghirardelli arrived in San Francisco during the Gold Rush and found his own kind of treasure in the form of a successful chocolate company. In 1893, he purchased an entire city block for his Ghirardelli Chocolate Company headquarters; the historic brick structures now serve as homes for restaurants and retail as well as, of course, a two-story Ghirardelli chocolate shop. 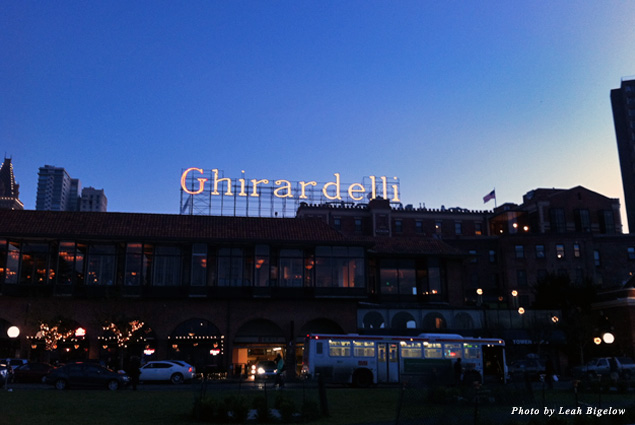 Nearby, on the corner of Beach and Hyde, the Buena Vista Café has welcomed locals and visitors since 1916. Its hilltop location (buena vista means “good view” in Spanish) near the bay served as a meeting place for those who worked at the nearby Sardine Cannery, and the rails for San Francisco’s iconic trolley cars pass right by the Buena Vista’s front door. Hungry folks stop at the Buena Vista for breakfast, lunch, and dinner, but it’s the café’s Irish coffee that really cements its place in San Francisco history. The café perfected its Irish coffee recipe in 1952 and continues to serve this delicious concoction in a special six-ounce, heat-treated glass to this day. 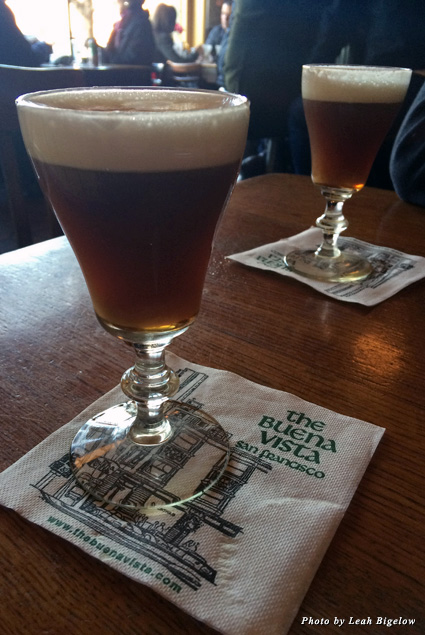 The cable cars that pass by the Buena Vista Café have become a symbol of the city, and San Francisco is home to the world’s last manually operated cable car system, which comes in handy when navigating the undulating landscape. There are 49 named hills in San Francisco, seven of which claim to be the original: Telegraph Hill, Nob Hill, Russian Hill, Rincon Hill, Mount Sutro, Mount Davidson, and Twin Peaks.

For some of the best views of San Francisco, head to the Twin Peaks, two hills reaching about 925 feet high that sit practically at the center of the city. Twin Peaks Boulevard, which links to Clarendon Avenue on one end and Portola Drive on the other, creates a figure eight pattern around the peaks for easy access. Small parking lots are available near the zeniths so you can ditch the car and walk to the tops for the ultimate photo ops. 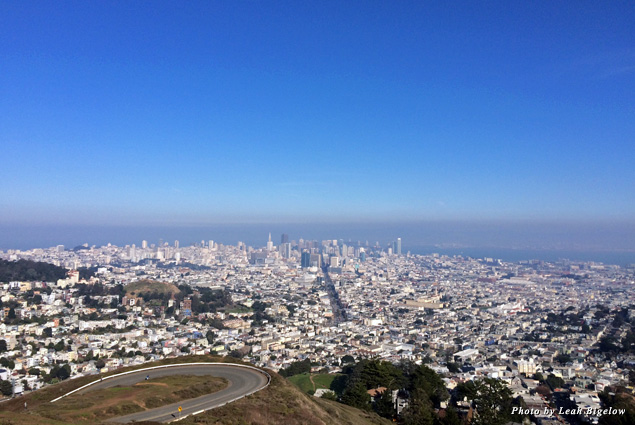 San Francisco is a truly special place. Who would have thought you could pack so many icons into 47 square miles on the tip of a peninsula? The city is even known for its thick, low-lying fog—which not only has a name, Karl, but also its own Twitter account. It is a city like none other.