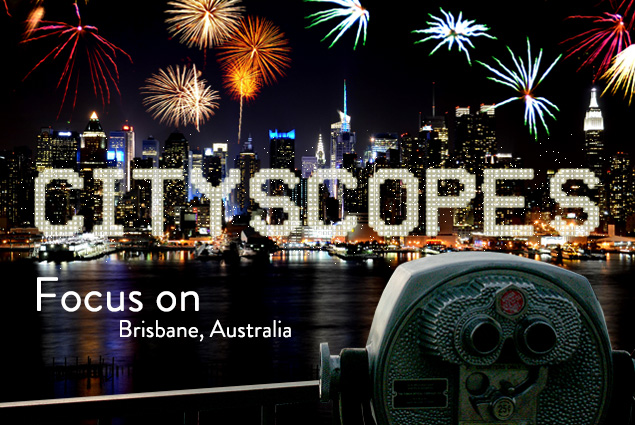 Many of the cities we know today have been shaped by centuries of civilization. Others reflect the designs of only a couple hundred years of development and technology. Brisbane in Queensland, Australia is one such city. Its modern-day name and layout trace its origins to the 19th century, when Sir Thomas Brisbane, the governor of New South Wales, ordered for a penal settlement to be developed in the northern part of the country.

During his exploration of the site for the governor, John Oxley discovered and named the Brisbane River, and the new penal colony of Moreton Bay later took on the same name. Brisbane was officially incorporated as a city in 1902.

Today, Brisbane is the capital and most populous city in Queensland. Its central business district sits in the bend of the river, on the original European settlement, and the city’s metropolitan area stretches from Moreton Bay to Australia’s Great Dividing Range. In the CBD, central streets are named after members of Great Britain’s royal family; running parallel to Queen Street (named for Queen Victoria) are the female names, including Elizabeth, Charlotte, and Ann, and crossing through them are the male-named streets, including George and William. 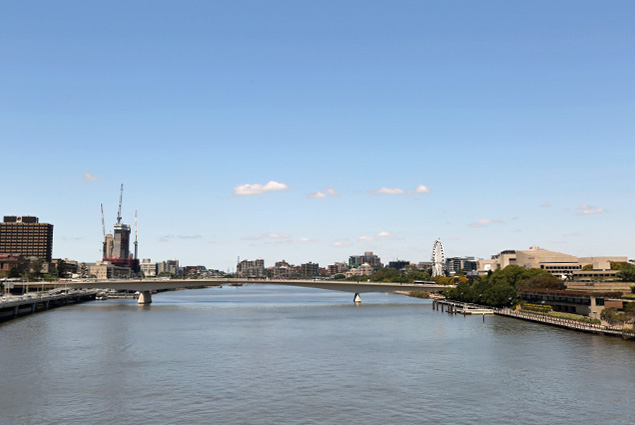 One thing I learned during my visit to Brisbane is Brisbanites are very proud of their city, and they’re happy to direct you to some of their favorite spots. The city even has a group of volunteers, called Brisbane Greeters, who will take groups of up to six people on a complimentary walking tour customized to your interests. I couldn’t resist this opportunity to meet a local and spend a few hours getting my bearings while soaking in as much as I could about Brisbane.

I met my Greeter at Brisbane’s City Hall, which borders one end of King George Square, just north of Queen Street Mall. Built between 1920 and 1930, the beautiful structure re-opened its doors in 2013 after a three-year restoration. Visitors can marvel at the main hall’s grand marble staircase, the auditorium’s Daphne Mayo decorative frieze and Father Henry Willis Organ, and the iconic clock tower (Brisbane’s tallest structure until the 1960s). 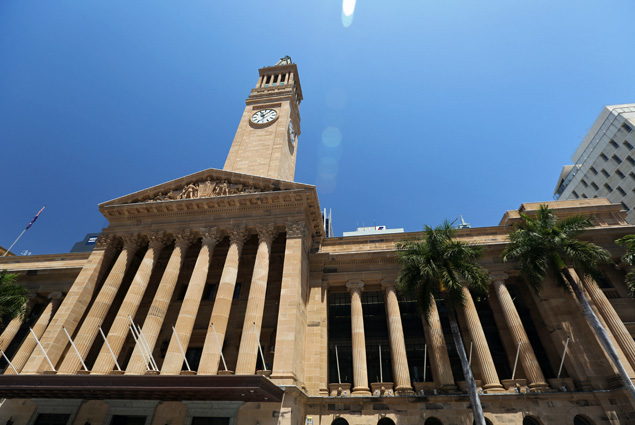 Though the clock tower was not initially open to the public, so many people asked to ride the elevator to the top that City Hall eventually opened it as an attraction. Originally six pence for admission, the ticket is now complimentary and can be picked up at the Museum of Brisbane counter on City Hall’s third level. Tours are held daily from 10 a.m. to 5 p.m.; arrive on the earlier side since there may be a wait during busier hours. We used our 30-minute wait time to wander the museum, which features imagery detailing the milestones of Brisbane’s evolution and displays exhibits of local artists. 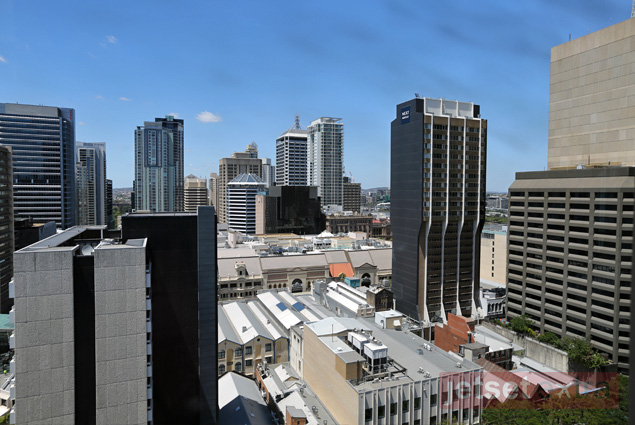 There’s more history to be found walking north of Albert Street and cutting through the park to Wickham Terrace in Spring Hill. Here you’ll find the Old Windmill, which was built by convicts in 1828 and was used for grinding grains. When the penal settlement closed in 1842, the windmill was dismantled; its later uses included the site of the first Queensland Museum and as a signal tower. It currently serves as a weather observatory and stands tall as the oldest surviving building in the city. 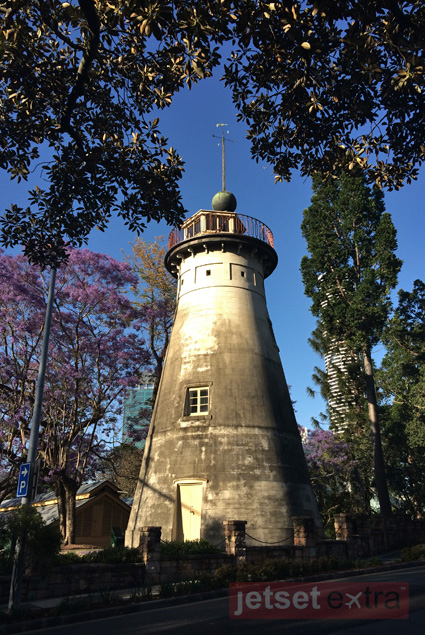 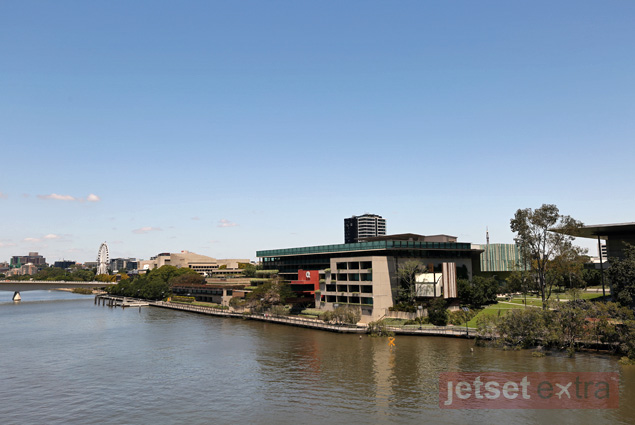 Another favorite find at the gallery was R. Godfrey Rivers’ “Under the jacaranda” oil on canvas painting done in 1903. I spotted jacaranda trees all over Brisbane and came to realize after conversations with a few locals that this tree has become a large part of the city’s landscape. Though they are not native to the region, these beautiful purple flowering trees thrive in Brisbane’s humid, subtropical climate. It is believed Rivers’ lovely painting depicts Brisbane’s first jacaranda tree, which was planted in the City Botanic Gardens in 1864.

Adjacent to Brisbane’s cultural institutions are the South Bank Parklands. Originally the site of the city’s World Expo 88, the parkland opened as its present-day incarnation in 1992. This is definitely a place where locals love to gather, either to enjoy an al fresco meal at one of the many restaurants lining the parklands or to take a dip in the man-made Streets Beach overlooking the Brisbane River and CBD across the way. For excellent views of the city, I recommend taking a ride on the Wheel of Brisbane, which stretches nearly 200 feet high and features air-conditioned pods and an audio system describing Brisbane landmarks. 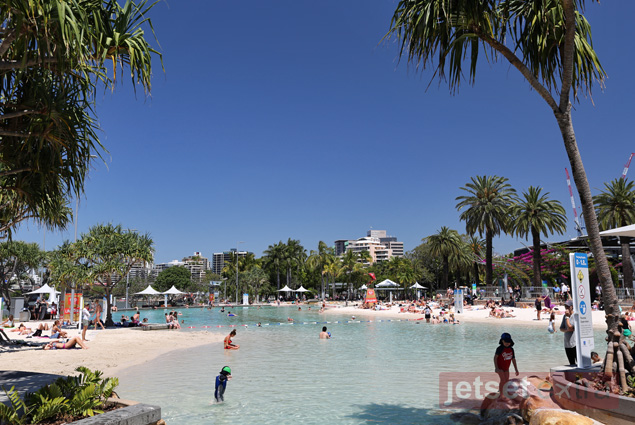 As you can see, Brisbanites like to be outside. You can’t blame them, since the city’s location brings mostly hot, humid summers and dry, moderately warm winters. With good weather brings good farmland and produce—on display at the many farmers markets I found throughout the city, including the Jan Powers Farmers Market at the Brisbane Powerhouse next to New Farm Park (as well as at additional locations throughout the week) and one at South Bank, too.

The highlight of my farmers market exploration, however, was Eat Street Markets, held on Friday and Saturday nights from 4 to 10 p.m. at Hamilton Wharf. The market consists of 50 specially designed shipping containers transformed into mini restaurants highlighting some of Brisbane’s best chefs. The whole space sparkles with market lights strung throughout, and live bands add to the fun, energetic atmosphere. It’s a place for families, couples, and friends to spend a nice evening while supporting and sampling local vendors.

Another awesome way to enjoy the outdoors and get an authentic Brisbane experience is to head to Lone Pine Koala Sanctuary, the world’s first and largest koala sanctuary. Established in 1927, Lone Pine began with just two koalas, Jack and Jill; it is now home to 130 koalas and more then 100 animal species native to Australia, spread out over a spacious, tree-lined area of land on the banks of the Brisbane River (about seven miles from Brisbane city center).

Visitors can wander the grounds, from the pens divided into habitats for turtles, Tasmanian devils, and dingoes to the homes for crocodiles, wombats, and a variety of native birds. There’s an enclosed, dark exhibit for the zoo’s two resident platypuses, and a large gated space for its many kangaroos. Be sure to stop by one of the gift shops to pick up a bag of kangaroo food; guests are able to enter the habitat and get up close and personal with these unique animals.

Lone Pine Koala Sanctuary also holds several educational sessions throughout the day. Guests can catch sheep dog and sheep shearing shows, watch a presentation with amazing birds of prey, and observe the wild lorikeet feedings. And on top of all that, visitors to the zoo also have the opportunity to hold—and get their photo taken with—a koala. It was an unforgettable experience, not only to cuddle with that adorable creature but also to have an opportunity to learn about koalas and the other interesting animals that call Australia home.

Of course, all this exploration could not have been accomplished without the help of my centrally located, comfortable, and secure hotel. On Queen Street, just a few blocks from the Queen Street Mall, the Manor Apartment Hotel was the perfect spot from which to set up my home base. My guest room was more like a small apartment, with a bedroom and living room, a full kitchen, and a washer and dryer in the bathroom.

Not only were these accommodations comfortable, but they also allowed me to reside in a piece of Brisbane history. The hotel’s structure was originally built between 1930 and 1931 as offices and suites for Colonial Mutual Life Assurance Society. In 1983, Queensland Newspapers purchased the site and reopened it as Newspaper House, and in 1994, the building was refurbished and once again rebranded, this time as the Manor Apartment Hotel. Remnants of its history still remain, visible in the special stonework and structure of the façade that lines Queen Street.

Brisbane was such a cool city to get to know, with its 19th century beginnings and its modern developments, and what made it even better where the people who called the city home and were happy to welcome me to it. I was surprised by how much there was to explore and at the same time how easy it was to settle into a comfortable vibe and make Brisbane my own.