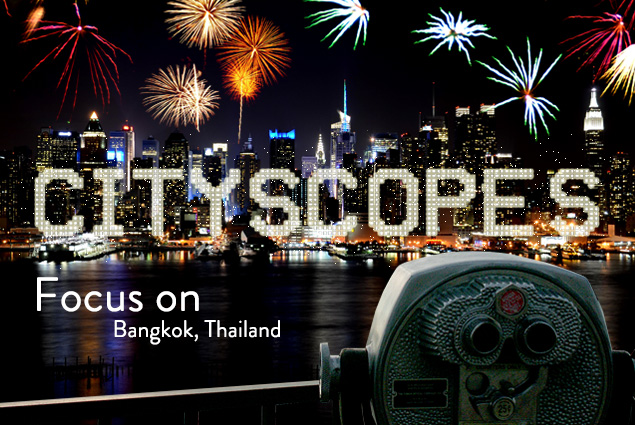 Bangkok, known in Thai as Krung Thep Maha Nakhon, was first settled in the 15th century as a village and trading post on the west bank of the Chao Phraya River. It has since grown into not just the named capital of Thailand but also its political, economic, cultural, and spiritual center. More than 12 percent of the country’s population calls the city of Bangkok home, with another 14 million people residing in the surrounding metropolitan region. Their culture, cuisine, and well-preserved landmarks draw international visitors, making Bangkok one of the top tourist destinations in the world.

Bangkok’s beginnings occurred during a period led by the Ayutthaya Kingdom, which fell to the Burmese Empire in 1767. Under the new rule of King Taksin, the capital became Thon Buri on the western bank of the Chao Phraya River, though only for a short time. In 1782, King Phutthayotfa Chulalok (known as Rama I) took over and moved the capital to the eastern bank’s Rattanakosin Island in Bangkok’s Phra Nakhon District; he erected the first city pillar on April 21, cementing Bangkok’s position as the country’s capital. 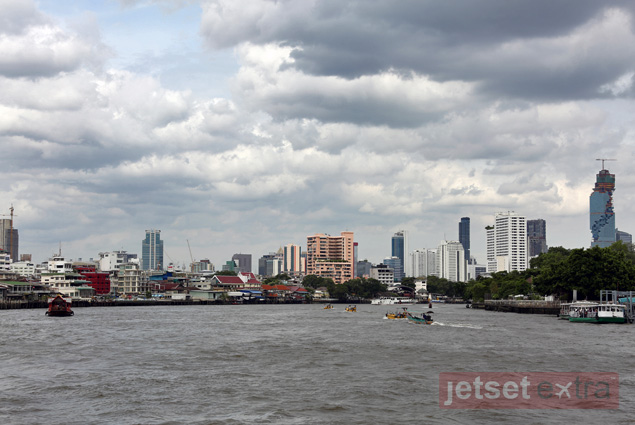 With the monarchy’s move to Bangkok came the establishment of the Grand Palace, a complex of buildings that served as the official residence of the Kings of Siam (later known as Thailand) until 1925 and is still used for official events. Today, visitors flock to the palace to view architecturally and historically impressive buildings including the Temple of the Emerald Buddha (known as Wat Phra Kaew), the “Throne Halls” of the Middle Court, and the Outer Court’s Pavilion of Regalia, Royal Decorations, and Coins.

Adjacent to the Grand Palace is Wat Pho, a Buddhist temple complex most notable for its 150-foot-long Reclining Buddha. Rama III built this chapel and its stunning statue signifying Buddha’s entry into Nirvana and the end of all reincarnations in 1832. Though the statue has a brick core, it’s exterior glows with gilded gold leaves, and the soles of its feet—which measure 10 feet high and 15 feet wide—are inlaid with mother-of-pearl. The Reclining Buddha may be the most impressive installation in Wat Pho, but make sure to take time to explore the entire temple complex, as it contains the largest collection of Buddha images in Thailand. 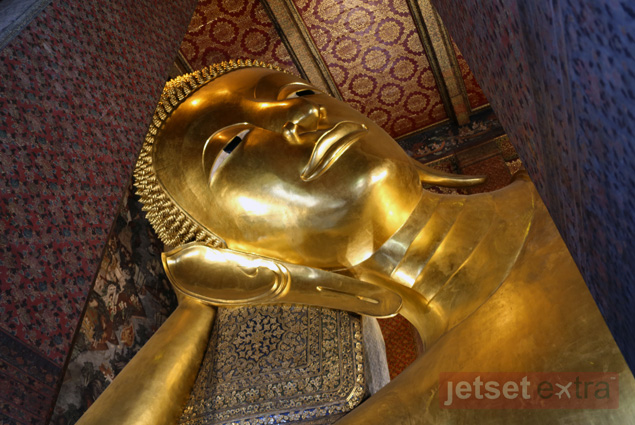 Also notable: Wat Pho is considered the birthplace of Thai massage and is Thailand’s earliest center for public education. Students were taught religion, science, and literature with the use of murals and sculptures, and a school for traditional medicine and massage was established in 1962. Medical inscriptions and illustrations can be found throughout the temple complex, including 60 inscribed plaques showing the pressure points used in Thai massage, an ancient healing system that combines acupressure, Indian Ayurvedic principles, and assisted yoga postures. Two of Wat Pho’s pavilions contain classrooms to teach traditional and herbal massage, and visitors can book massage services at the school. 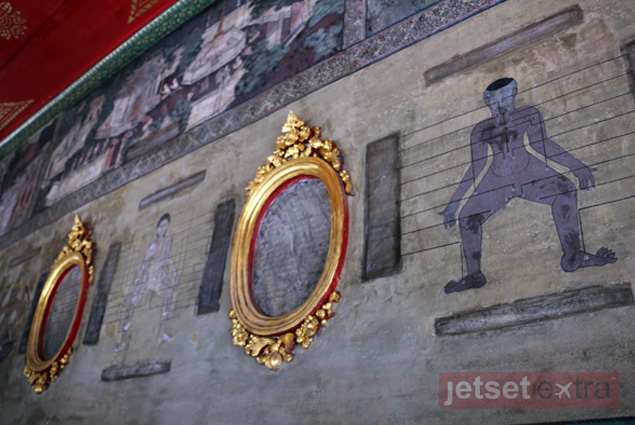 Across the Chao Phraya River from the Grand Palace and Wat Pho is Wat Arun, the Temple of Dawn. This Buddhist temple traces its origins to the 17th century, and it was included on the grounds of the royal palace during King Taksin’s rule. It was also the original shrine for the Emerald Buddha, before its transfer to Wat Phra Kaew in 1785. With the building of the Grand Palace and the change in royal residence, Wat Arun sat abandoned until the 19th century and the reign of Rama II, who restored the temple and added the pagoda’s distinctive spires.

When visiting temples and royal buildings throughout Thailand, it is very important to follow a proper code of conduct. In general, knees and shoulders must be covered for both men and women, and religious buildings require the removal of shoes before entry. Speaking of shoes, Thai people consider feet the dirtiest and lowliest part of the body; pointing or touching something with the feet is considered disrespectful. I experienced this first-hand at Wat Pho, when we entered Phra Ubosot, the assembly hall for performing the monastic ritual, and were instructed to sit with our feet tucked behind us as a show of respect for the Phra Buddha Theva Patimakorn statue at the front of the room. Be sure to check for any specific dress and behavioral requirements before your visit. 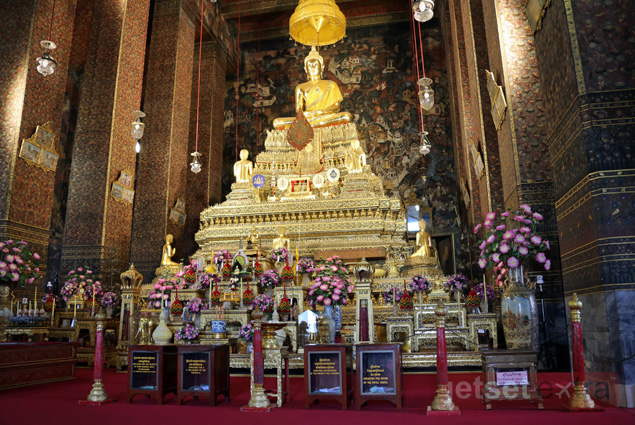 Respect for the monarchy is also a very important part of Thai culture, as the king and the royal family are well regarded for their commitment to the people’s welfare. To criticize members of the royal family or ridicule their likeness is punishable by law, and Thai people have many ways to show their respect for their king. The current king, Rama IX, resides at Chitralada Royal Villa, part of the Dusit Palace complex. Also on this property are factories and a dairy farm—the king is interested in agricultural industries—as well as an exclusive school first established for the children of the royal family. It is generally closed to the public.

Bangkok is a blend of old-world charm and modern convenience. Though its rapid growth paired with a lack of urban planning and regulation resulted in limited roads, persistent traffic congestion, and terrible pollution in the 1990s, the national government and local Bangkok Metropolitan Administration have teamed up to develop four rapid transit lines with more systems planned in an effort to increase the use of public transportation. The Bangkok Mass Transit System, also called the BTS or the Skytrain, is an elevated rapid transit system that takes travelers to 34 stations along two lines. Three-wheeled auto rickshaws called tuk-tuks are popular forms of transportation for their ability to weave through heavy traffic and their negotiable fares.

As with the city’s streets, its sidewalks, too, are buzzing with people. Locals rely on street vendors selling food and other items and often spend their free time at one of the many indoor and outdoor shopping malls. One of the best shopping areas is accessible from the Chitlom BTS station, where you’ll find the seven-story Central Chidlom Department Store, upscale shopping at Gaysorn Plaza and Erawan Bangkok, and the 500 shops at CentralWorld. The comfortable and welcoming Pathumwan Princess Hotel—my accommodations during my stay in Bangkok—connects to the MBK Center, another seven-story mall perfect for last-minute souvenirs. 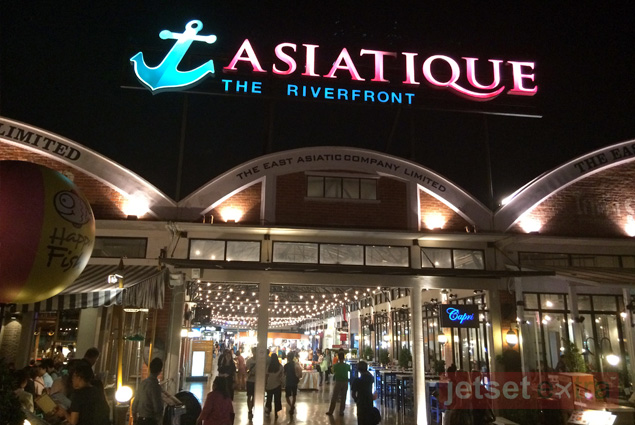 I particularly enjoyed our night out at Asiatique the Riverfront, an open-air night market on the former docks of the East Asiatic Company. Founded in 1897, the Western firm called East Asiatic Company often traded with what was then known as Siam and owned port facilities and warehouses along Bangkok’s Chao Phraya River. Operations ended in 1947, and the site went unused until plans for Asiatique began to take shape in 2011. Many of the 1,500 shops and 40 restaurants are now housed in the warehouses, creating a maze of locally made products and popular brands. It may seem touristy, but our guide assured us the locals love it as well. I found it vibrant, colorful, and reminiscent of one of my favorite outdoor malls back home.

Another excellent place to visit at night is Bangkok’s Chinatown, Thailand’s largest Chinese community. It is commonly referred to as Yaowarat, for the street on which it is located. We had a delicious dinner at one of the restaurants here but made sure not to get too full, as the streets are lined with myriad food stalls and dessert carts. Day or night, be sure to make a stop at the nearby Pak Khlong Flower Market (open 24 hours) for a variety of colorful flowers and floral accessories. 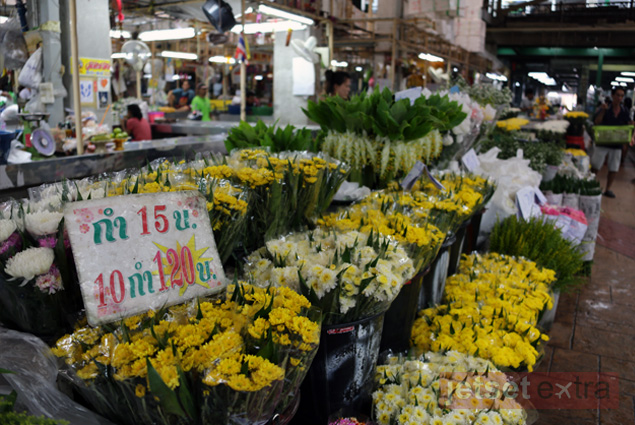 Of course, one can’t mention nightlife in Bangkok without including its infamous red-light district. Though prostitution is technically illegal in Thailand and you’ll rarely hear it talked about on the streets, the industry not-so-secretly thrives at hourly hotels, saunas, and massage parlors, giving Bangkok the nickname “Sin City of Asia.”

But there is so much more to Bangkok than a few seedy—and, honestly, easily avoidable—operations. Make your visit to the city about discovering its extensive history, pay your respects at the temples, take in the skyline from aboard a river cruise, and load up on souvenirs made with local ingredients. The more you open your mind and heart to Bangkok, the more it will welcome you into its loving arms.