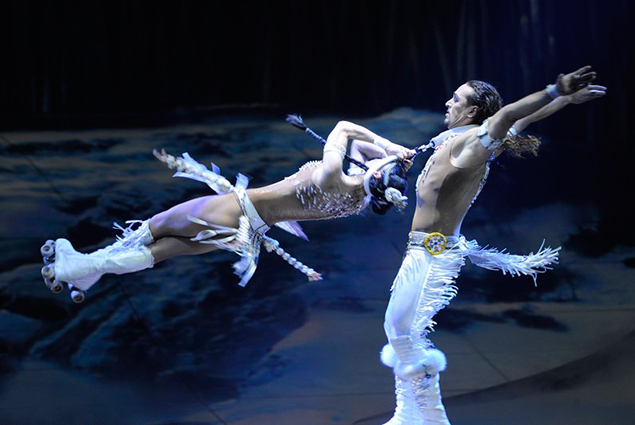 Those may be big topics, but if you know anything about Cirque du Soleil you know that the revered performing arts titans can tackle any subject with ample grace and stunning bravura. That’s certainly the case with the group’s latest touring show, “Totem,” which recently hit San Francisco. It heads to London after the holidays and then is back in the Bay Area in San Jose in March.

Travelers who happen to also be theatergoers (and vice versa) will absorb Totem’s harmonic message—it takes the “we’re all in this together” concept and weaves in themes of evolution and “Big Bang” lushness to provoke thought and engage its audience in one of the most breathtaking shows of the season.

There hasn’t been a Cirque show quite like this.

Written and directed by Robert Lepage, the brainchild behind the fiery “Ka” in Las Vegas, Totem delivers more than 10 acts, each awe-inspiring — from Amerindian hoop dancers and a fixed trapeze duo to a spectacle on the Russian bars and elegant ladies on tall unicycles tossing and balancing bowls on their heads.

There’s plenty of eye candy, too. Set designer Carl Fillion gives the show an impressive visual environment representing an organic world. There’s a marsh lined with reeds near an island (the stage), where images are projected. Tilted slightly forward, this “image marsh” is both an entrance and projection surface. At any given point, moving images transform it into a virtual swamp, river, lake, ocean, volcanic island or even a star-cluttered sky.

“Cirque is often about how we can perceive things differently,” says Yves Sheriff, senior artistic talent scout (for clowns). “But Cirque is also about taking something that is simple or popular and being able to ponder it. I think the public likes that.”

For an insightful behind-the-scenes look at Totem, see my backstage (under the tents) tour below. Learn even more about the show, get tickets and more here.

Behind the scenes at Totem: