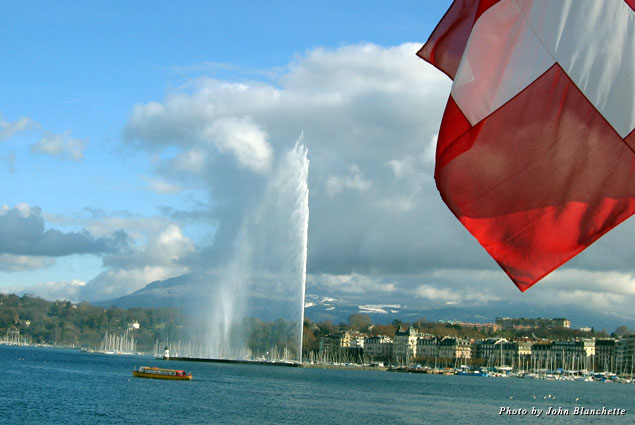 It was December and snow was falling in the Alps. Throughout Switzerland, Christmas markets were preparing to celebrate the season. The air was full of aromatic spices wafting from the large pots of steaming red, mulled glühwein, which the Swiss drink to chase the evening cold. The scent of fresh-cut evergreens and wood smoke mixed with roasting chestnuts, frying sausages, cheese raclette, and brewing coffee wandered through the narrow streets. 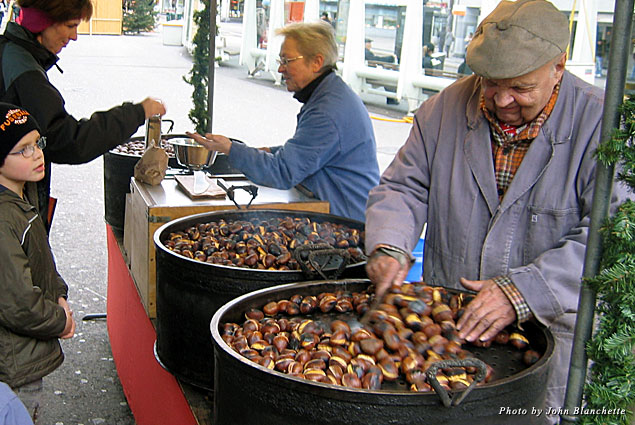 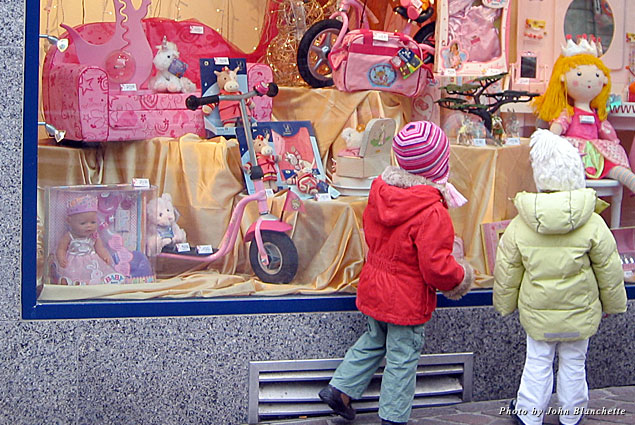 I arrived from Los Angeles on Swiss International Air Lines, which has direct flights from several American cities into Zurich Airport, a magnificent newly remodeled facility. This is the sixth year in a row they were voted best airline.

There is no need for an automobile in Switzerland; trains running throughout the country link up at the airport. It is far less dangerous and costly to take public transportation in winter. Gasoline is between $5 and $6 a gallon, and an eight-day Swiss Pass, which allows you to ride all the trains, buses, boats, and most trams and enter more than 400 museums, is only $330. You can save 10 percent by buying the pass in the United States.

Jutting above the very center of Europe, the Alps are at their most majestic here. The Swiss speak four national languages, reflecting the influence of its neighbors, France, Germany, Austria, Liechtenstein, and Italy, and almost everyone knows some English. For such a small country there is great diversity. Zurich is also home to the largest Christmas market, located in the train station, where a huge tree is decorated with 10,000 glimmering Swarovski crystals. 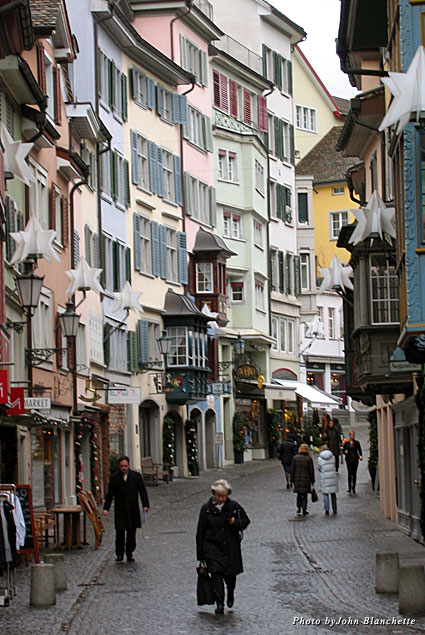 Fondue is primarily a winter indulgence, and I indulged at several restaurants in different parts of the country during my stay. Each restaurant’s fondue is a little different, depending on the cheeses employed with the garlic, Kirsch, and other ingredients. Bread is the primary dip; none of the restaurants I visited used fruits or did a chocolate or meat version.

One of the best fondues is found in Zurich, lying at the top of Mount Uetliberg, which offers a panoramic view of the city. A special tram runs up the steep incline. You are so close to heaven that, once inside the restaurant, you feel overpowered by the aroma of angel’s feet; fondue is heady stuff in a glass-enclosed restaurant.

Local custom only allows fondue to be consumed with white wine or tea; no red wine, soda, beer, or ice in your water, otherwise expect disastrous effects on your digestion. According to our guide, this is a quirk of the Swiss. They have rules which make things “either forbidden or compulsory” in all spheres of their lives.

The nearby town of Einsiedeln has a traditional country Christmas market, with local food stands and homemade sausages, preserves, liquors, crafts, and ornament booths that line the curved main street for a quarter mile. The smells are intoxicating.

The town is dominated by the Abbey, a major pilgrimage site famous for it’s incredibly ornate baroque cathedral and its icon, the Black Madonna, the Virgin Mary statue, which was blackened by candle smoke and remains black at the request of the parishioners. 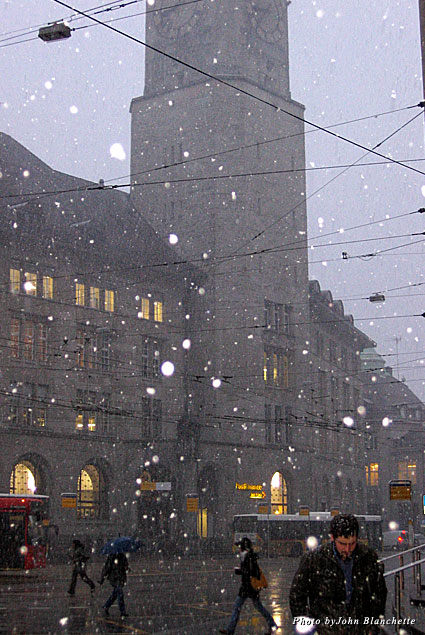 Appropriately for such a time-conscious country, from Zurich in the north I followed a clock-wise route, visiting Christmas markets in St. Gallen to the east, Montreux to the south, and Geneva in the west. In this way I was also moving from German-speaking areas to French.

The beers are excellent in Switzerland and, other than Lowenbrau, are produced by relatively small breweries. In Zurich I enjoyed Steinfels brewpub, and in St. Gallen you can take a tour and get a tasting at the Schutzengarten Brewery, an easy streetcar ride from the train station. Beware of the brauhauses and nightclubs if you are a non-smoker as tobacco is still widely enjoyed with alcohol.

St. Gallen boasts the tallest Christmas tree in Switzerland, and the lighting ceremony is an annual event complete with caroling and children dancing and playing under the tree. Free glühwein was served to all, enhancing the holiday spirit.

St. Gallen has the highest altitude of any city in Switzerland and has one of the country’s finest universities. It is known for its fine linen and textile work, and the museum is impressive.

A two-hour train ride south will bring you to Montreux. Sculptured into the hillsides above Lac Leman (Lake Geneva), it looks across the deep blue waters to the ascending snow-capped Alps. Just down the lake is the Château de Chillon, made famous in a poem by Lord Byron, who carved his name into one of the castle beams.

Montreux has the largest outdoor Christmas market, with more than 200 Swiss chalet-like booths hugging the walkway along the lakeshore. The neighboring town of Vevey is an artistic center and was home to many of the world’s greatest writers, composers, and philosophers. Stravinsky wrote the “Rite of Spring” in Vevey, and Hemingway, James Joyce, Henry James, Graham Green, Charlie Chaplin, and many others lived here.

This is one of Switzerland’s finest wine growing regions as well, with vineyards spilling down the steep hills, especially above the villages of Vevey and Chexbres, and throughout the Lavaux region. 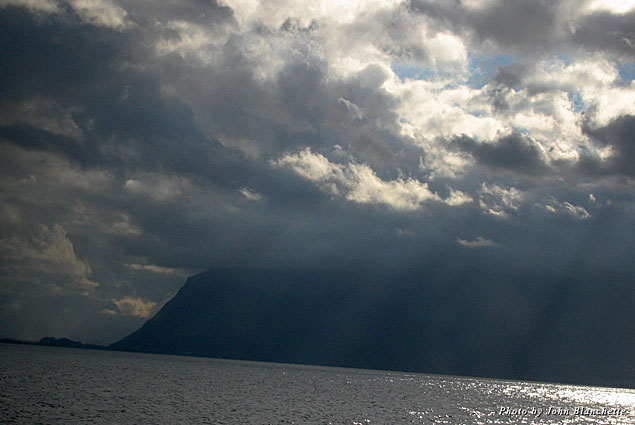 The train from Montreux to Geneva runs along the lake and faces the magnificent Jura Mountains. After about an hour of jaw-dropping views, you enter Switzerland’s most cosmopolitan city, the home of Calvinism, the Red Cross, United Nations, World Health Organization, World Trade Organization, and League of Nations. Forty percent of Geneva’s 180,000 population are foreign.

Like a nose poking into eastern France, Geneva lies at the tip of Lac Leman, where it flows into the Rhone River. In the center of the lake the tallest waterspout in Europe, Jet d’Eau, proudly proclaims the free-flowing spirit of the city.

Old Town, built in the hills overlooking the river, is the place to go for the Christmas markets and the traditional restaurants. The village of Carouge, just outside of Geneva, offers a picturesque view of the 18th century, with narrow streets, courtyards, gardens, and little shops. At the town’s Christmas market you can purchase local crafts, the omnipresent sausages, and homemade preserves.

The dollar goes a long way in Switzerland compared to other parts of Europe relying on the Euro. The Swiss Franc is about ninety cents to the dollar, and the bargain shopping chain Denner offers great prices on liquors, chocolates, perfumes, and other common items. It’s cheaper and offers better choices than at the airport Duty Free stores. But for really good Swiss chocolate, look for the Sprungli shops.

In Zurich, restaurants serving traditional holiday foods include Vorderer Sternen Grill, which offers the best sausages in town. Tina Turner is a regular. Oepfekhammer’s has been open since 1700. You get free wine if you climb up into the rafters and drink a full glass upside down. Do it early.

Le Dezaley features food from Vaud. Opened in 1925, the Kronehhalle was a favorite for artists and writers, and the walls are full of their art. The beautiful Lake Side restaurant on Lake Zurich is also next door to the casino if you want to gain and lose at the same time. In the nearby town of Einsiedeln try the local beer with the veal at Drei Konige.

In Geneva, Rest’O by Arthur’s is one of the city’s finest contemporary restaurants. Café Papon is built inside a castle and serves on long communal tables. Café de Peney is a lovely country auberge in the wine country of Peney-Dessous outside of Geneva.

Hotel recommendations include Walhalla in St. Gallen, Cornavin in Geneva, and Hotel Four Points Sheraton in Zurich. In Montreux, indulge at the Grand Hotel Suisse-Majestic, which overlooks the lake. Every hotel I stayed in had feather pillows and down comforters to keep the cold Swiss air away.

The Beau-Rivage in Geneva, Switzerland A View From the Top: Refocusing From the Swiss Alps