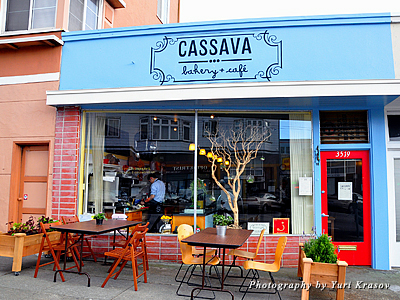 It seems owner/chef  Kristoffer Toliao and managing partner Yuka Ioroi of Cassava Bakery and Café in San Francisco have discovered a secret to success – treating your job as your life. Up before dawn and back home late at night, the husband-and-wife team spends a large part of the day tending to a flourishing business that is gaining popularity among their food-forward neighbors by the hour.

Importantly, the newly-opened café is located in the Richmond district of San Francisco, where there is no shortage of cheap and rather decent eateries.

What sets Cassava above and beyond the rest is [read my lips] E-L-I-T-E haute cuisine fare served in a tiny, yet tastefully appointed dining room at very democratic prices.

While breakfast, lunch, and brunch are the main focus here, recently introduced pop-up tasting dinners sell out the moment Yuka announces them on Cassava’s website and Facebook page.

These dinners are offered by reservation only, and to only 12 people at a time to assure the necessary quality of preparation, service, and attention to detail, highly valued by the proprietors. Their diligent pursuit of the best possible results in cooking with the fresh local organic ingredients shows in every small bite on the daily changing menu. 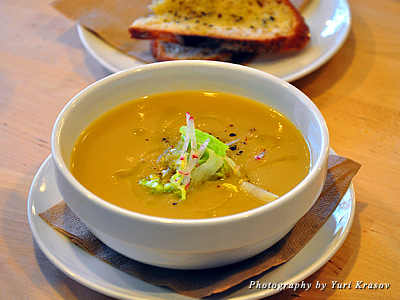 On the night I was lucky enough to get a taste of Cassava, the soup was made of Japanese sweet potato and ginger, with a touch of raw carrot juice and olive oil blended in, and with shreds of romaine and radish as decorative topping. By its look and taste, this soup alone could have been served in a high-end establishment, where I’d pay at least twice what was charged here. 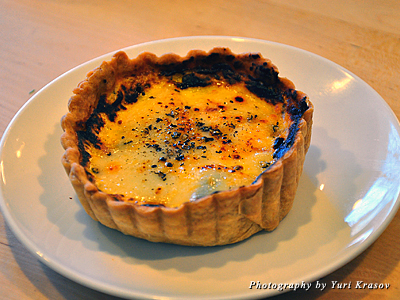 Then came the most incredible quiche – silky, soft, and mushroom-strong in perfectly crumbly dough stuffed with Roma tomatoes, crimini, and Vermont white cheddar. For five bucks a pop, I could eat those quiches every day for breakfast, lunch, and dinner, especially since Chef Kris makes different ones every day, and only about 15 at a time – once again, to maintain the quality and integrity of his creation. 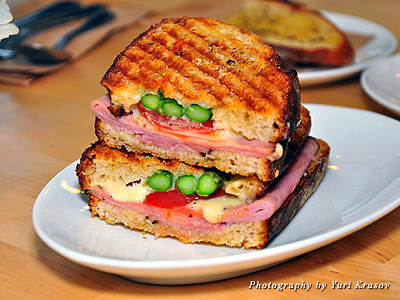 My ham and cheese sandwich was perfectly grilled, crunchy, flavorful, with each ingredient holding its own, and – nicely complimented by a fresh burst of sprightly asparagus embedded between the Black Forest ham and Vermont white cheddar on golden-toasted Semifreddi’s deli white. 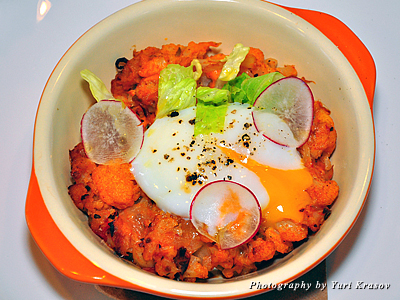 Another of Kris’s masterpieces is called cauliflower cassoulet, and is baked with roasted tomato sauce; redolent of fennel and cumin, and crowned with a poached egg with a bright gooey yolk. Not a stranger to this easy-going cruciferous, responsive to any cooking mode, I must admit that I’ve never tasted a cauliflower this good. 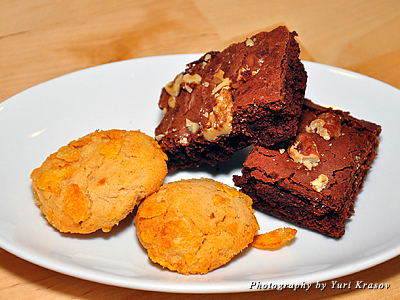 Although Chef Kris said it more than once that he did not consider himself a baker, his walnut brownies, and especially the peanut butter and corn flake cookies (Yuka’s mother’s time-honored recipe) were as stellar as the rest of his food. 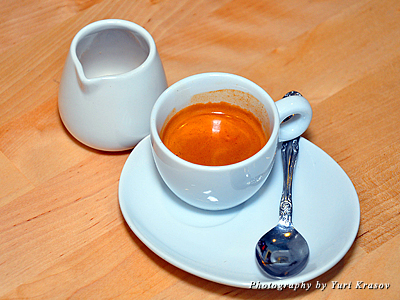 Cassava serves an assortment of Semifreddi’s pastries (including addictive brioche “morning buns”) and Ritual Coffee starting at 7 a.m. on Monday, Wednesday, Thursday, and Friday. On Saturday and Sunday it opens at 8 a.m. and closes each day at 5 p.m. Full breakfast menu is served from 8:30 a.m., lunch from 11 a.m. On weekends, a sit-down Japanese breakfast is served, and brunch starts at 10 a.m. Closed on Tuesday. Dinner nights are on Fridays at 6:00 and 6:30 p.m., and on Sundays at 4:30 and 5:00 p.m.

Since hours are subject to change, and availability of the goodies can be limited it is advisable to phone or text (415) 640-8990 or email info @ cassavasf.com.

Cassava Bakery and Café is located at 3519 Balboa Street, San Francisco, CA 94121. Daily menu changes are announced on Facebook, Twitter, on the menu board at the café, as well as  their website.