Buenos Aires: A City of Indulgences Certain to Leave You Wanting More 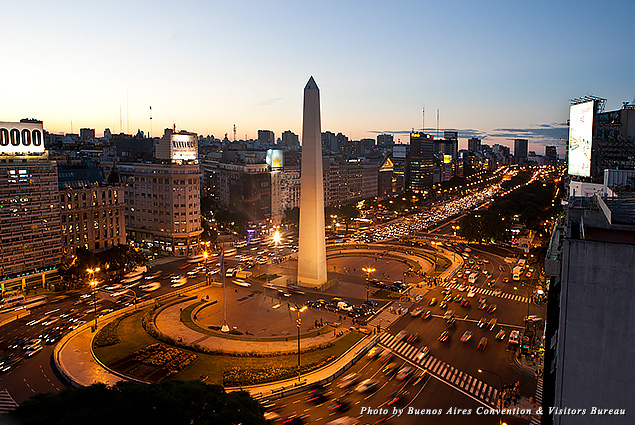 South America has been on my travel to-do list for years, but there was something in particular that drew me to select Buenos Aires for my first jaunt to the Southern Hemisphere. Maybe it was the nickname the city is often given, “The Paris of South America,” that enticed me. Or maybe it was the promise of the indulgences that Buenos Aires is best known for: late nights filled with tango dancing, delicious steak, and Malbec wine. Regardless, intuition told me Buenos Aires and I would be the perfect match. I decided to test that hunch and planned a trip as Seattle was transitioning from fall to winter in order to take advantage of South America’s warm temperatures and sunshine.

When deciding where to stay in Buenos Aires, two neighborhoods intrigued me: Recoleta for its upscale, Old World charm and Palermo for its trendy chicness. When I couldn’t choose, I decided to split my time between both neighborhoods, beginning with three nights in Palermo Soho followed by three nights in Recoleta.

In Palermo Soho, I stayed at the Legado Mítico, a luxury boutique hotel located on a tree-lined cobblestone street. Upon entering the front door, I was engulfed in a cozy yet sophisticated atmosphere of dark mahogany furniture and leather sofas. A breakfast lounge served a buffet each morning, complete with pastries, yogurt, fruit, and the decadent Argentine specialty, dulce de leche. The hotel has an elaborate library providing an education on Argentine history. 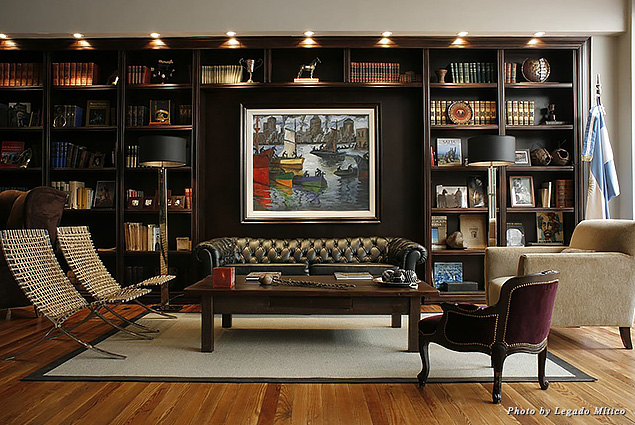 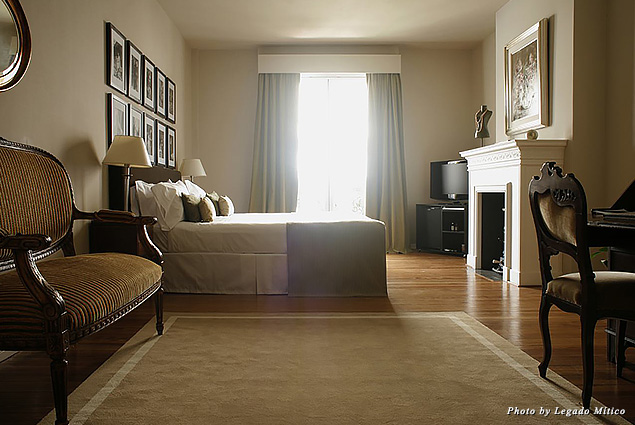 After my third night in Palermo Soho, I reluctantly left Legado Mítico and moved to my hotel in Recoleta, the Hotel Club Francés. My reluctance was for naught. As I arrived in my new neighborhood, I realized great shopping and sightseeing would be just a short walk away from the hotel. The staff greeted me warmly, quickly checked me in, and carried my bags upstairs to my spacious room. The hotel offers 28 rooms and suites, many with balconies, decorated in styles ranging from traditional to contemporary. 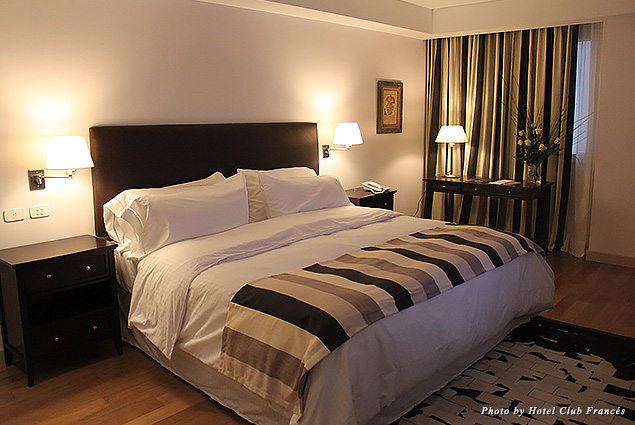 The hotel is located in the former Club Francés, which brought together a community of French-born residents of Buenos Aires, dating back to 1866. The hotel reflects its European roots with Belle Epoque antique furniture and ornate meeting rooms with marble fireplaces and chandeliers. Just off the lobby is the hotel’s restaurant and 120-year-old mahogany bar. A complimentary full breakfast is served each morning in the hotel’s solarium, which can be worked off later in the day at the hotel gym. The hotel also offers sauna rooms, a Finnish shower, and a fencing hall consisting of three courts. 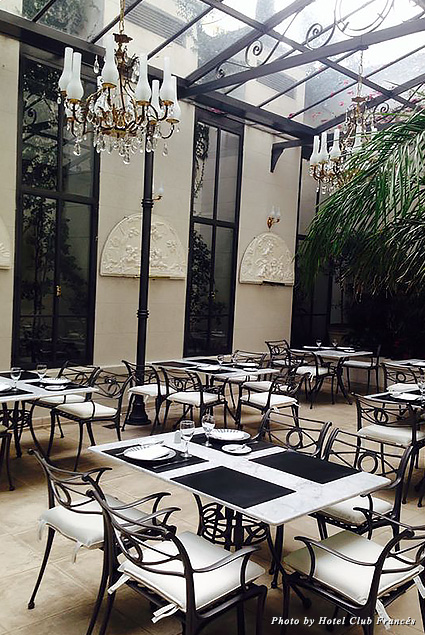 Buenos Aires is well known for its parillas, or steakhouses, and while I love a good steak, I wanted to go in a different direction and sample some of Buenos Aires’ more gourmet cuisine. The best way to accomplish this and receive an authentic Argentinian experience is to make reservations at a puerta cerrada, or closed-door restaurant, operated out of a local’s home. I chose Casa Coupage, located in Palermo, which is known for being one of the best closed-door restaurants in Buenos Aires and for its unique start as a wine club. I arrived at the unmarked door, rang the doorbell, and was greeted by Santiago, owner and sommelier of Casa Coupage. Santiago led me into the elegant dining room just off the foyer where individual tables made the space feel more like an upscale restaurant and less like someone’s home. 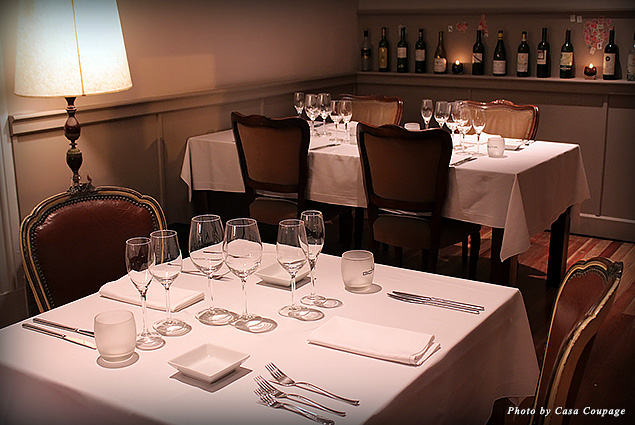 After sitting down at a corner table next to a shelf upon which wine bottles were lined, Santiago began by talking to me about my preferences in wine, which was clearly going to be the evening’s focus. There was no menu for the food. Rather, multiple courses of seasonal foods prepared by Casa Coupage’s chef were presented over the next three hours. The food was beautifully plated and equally delicious. Every course was paired with a wine selected by Santiago that perfectly enhanced the experience, and he provided me with an education in wine, especially that of Argentina, throughout the evening. At one point, Santiago approached the table and handed me two vials, asking me to inhale the one-note scent in each and tell him what I detected. As he explained, he wanted me to use my nose instead of my brain to determine a scent. I guessed both correctly: Licorice first, then thyme. By the end of the night, all of my senses had been heightened and engaged during this amazing meal. 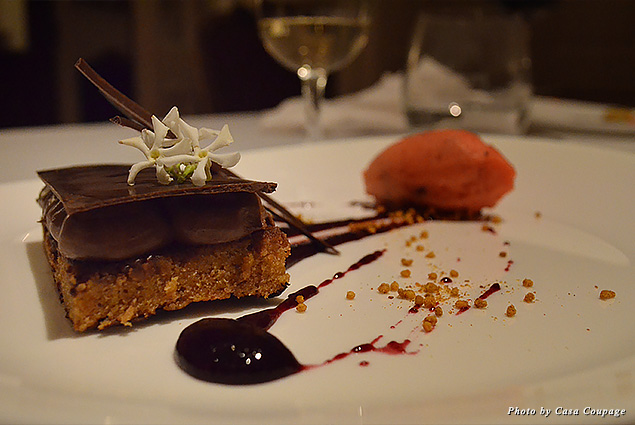 Even though I chose not to make steak my main focus when dining in Buenos Aires, I still sought out a traditional Argentine Sunday asado, or barbecue, at Faena Hotel in the Puerto Madero neighborhood. Don’t let the barbecue name fool you. This was no backyard, eat-with-your-fingers event. The Faena Hotel is equal parts luxury and chic wrapped up in a Philippe Starck-designed package, and its asado reflected the same sentiment. The asado is held at Faena’s El Mercado restaurant. Depending on the time of year, Faena hosts the barbecue in the restaurant itself or outside on its patio. In addition to a gourmet buffet line filled with various salads, pastas, cheeses, and charcuteries, servers brought Argentine specialty empanadas to the table as well as heaping plates of various cuts of beef and sweetbreads. 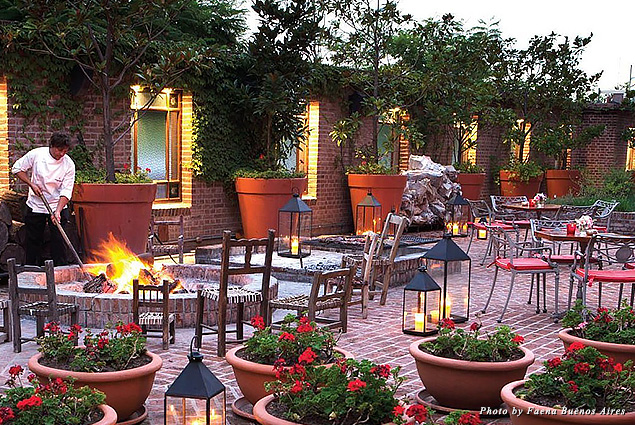 In addition to Buenos Aires’ decadent food, I also wanted to experience its nightlife. Nights in Buenos Aires start late, with diners not typically sitting down for dinner until after 9 p.m. and nightclubs not gearing up until well after midnight. I made a beeline for drinks at Peugeot Lounge in Palermo Hollywood. Peugeot is the French car and bicycle brand, a central theme in the two-story lounge’s décor. I was greeted by a Peugeot automobile outside the front entrance and then climbed the stairs in the back of the bar up to the second floor, where it was quieter and had an outdoor patio overlooking Buenos Aires’ cobblestone street below. After looking over the tapas and craft cocktail menu, I asked the bartender, Emanuel, to choose. He served me a delicious drink of gin infused with olives, sugar, Tabasco, egg white, and lemongrass. 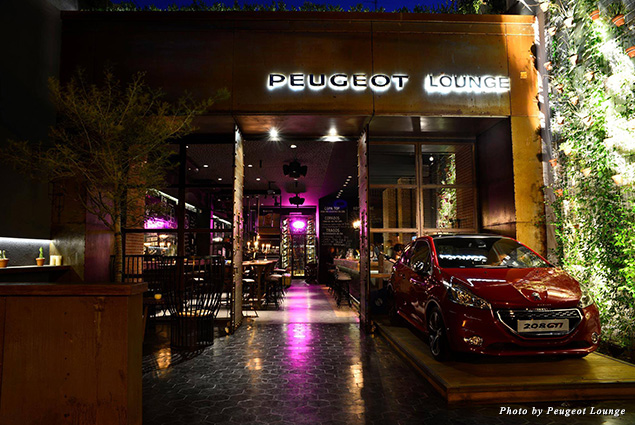 Cocktail bars aside, it wouldn’t be a trip to Buenos Aires without seeing a tango show, and Tango Porteño is among the best. Located in an Art Deco-style theater near the famous Buenos Aires’ Teatro Colón and the obelisk, Tango Porteño offers both a three-course dinner and a show, all set to music by a live orchestra. The doormen, staff, and performers are all dressed in period costumes, reflecting the golden age of the 1940s. Those feeling especially adventurous can get in on the action by taking a complimentary tango lesson before the show begins.

I was also lured to Buenos Aires by the exchange rate for American tourists. At the end of 2011, the Argentinian government imposed restrictions on the amount of US dollars Argentine citizens could buy for savings or travel. As a result, the black market for US dollars rose, creating a parallel exchange rate called the “blue rate.” Visitors to Argentina from America can enter the country with US dollars and then decide at which rate they would like to exchange: the regular exchange rate or the blue rate. (At the time of publication of this article, $1 USD = 8.78 Argentine Pesos for the regular rate, and for the blue rate, $1 USD = 13.79 Argentine Pesos.) It takes a bit more effort to find underground exchange houses that offer the blue rate, but considering the substantial difference in rates, the effort pays off, especially given Buenos Aires’ shopping opportunities.

Palermo Soho has some of the best shopping I’ve ever found while traveling. In addition to brand name stores, the neighborhood is filled with boutiques offering clothing for men, women, and children as well as home goods, wine, jewelry, and various gift items. My favorite boutique was Patrón, a self-described “concept store” owned by an Argentinian woman, Laura Patrón Costas. Patrón’s central focus is to provide a space for local design to flourish. Laura accomplishes this task with an upstairs boutique that sells goods made by local Argentinians, including jewelry, clothing, handbags, and home items, and a downstairs space where she regularly hosts design and art exhibitions throughout the year. As Laura explained, she sells goods that “finish people and the home—accessories.” All of the goods sold at Patrón are specifically curated by Laura and reflect a contemporary mood as well as chic, simple, and elegant taste. After examining the space and its contents, I couldn’t resist a beautiful pair of gold earrings and a long silver necklace.

Buenos Aires is well known for its leather goods, and with the great exchange rate, I knew my money would go especially far for a leather jacket. I visited Uru Recoleta, which is located near the Recoleta Cemetery (a must-see stop in Buenos Aires) and receives good reviews for its quality and selection. A saleswoman helped me select the style of my short, belted jacket in a buttery soft, cognac-colored leather. She also offered to give me a tour of the leather factory upstairs, where customers can select their leather and the lining for their jacket as well as observe tailors making jackets. She then took my measurements and advised me that I would have a custom-made leather jacket sitting in my hotel room by that evening. Sure enough, when I arrived back to the Hotel Club Francés at the end of the day, my gorgeous leather jacket was sitting inside a Uru Recoleta bag on my bed.

My hunch was right. I stayed in beautiful hotels. I ate well. I drank well. And I definitely shopped well. Hasta la vista, Buenos Aires. I’ll be back.

A Platinum Trip to BA