Brit on the Boulevard: Summer 2012 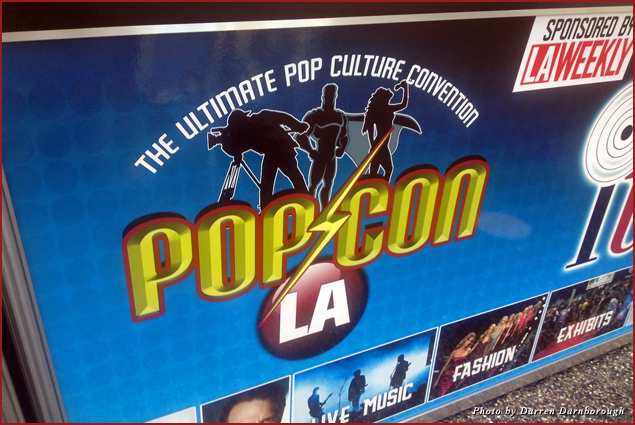 A Monthly Hollywood Round-Up by a Brit in LA.

Aaaah, 4th of July. Independence Day. The day that Americans celebrate their independence from the Brits (or the day Will Smith “whooped E.T.’s ass,” whichever you prefer).

So in true British ironic homage, a group of us (including several Grange Hill alumni and a few token yanks) claimed a rather fine territory on Manhattan Beach, just south of LA, to enjoy the start of summer in classic SoCal fashion. If you like burgers, beaches, bikinis, bodies in bikinis, or the letter B in general, it’s a great spot to bugger off to. 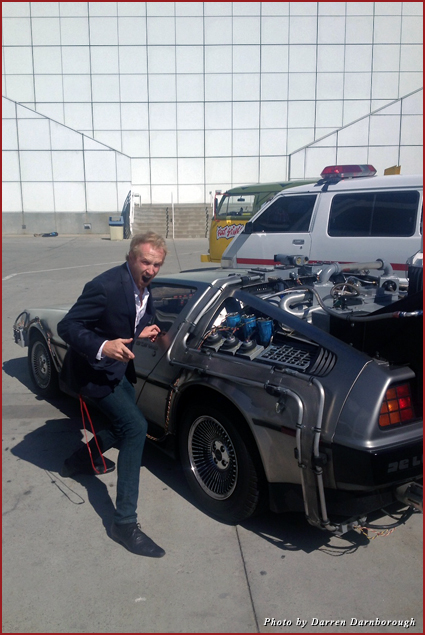 Talking of buggering off, the following weekend welcomed the inaugural Pop Con LA – a pop culture festival of film, fashion, music and generally much cult horror and sci-fi goodness (including the Back to the Future DeLorean) at the LA Convention Center, whose STTV Awards ceremony graciously nominated my web-comedy Andy and Chaz Bugger Off to America as Best Comedy, and yours truly as Best Comedy Actor, and was hosted by none other than Corey Feldman.

We also launched our new project The Adventures of Dude and Bro at the ITV Fest there, and many weblebrities and new-media stars turned out in force, rocked the red carpet (as I did in my best threads from Turkish brand Tween) and after-partied on the rooftop of Icon to the sounds of top female DJ Shy.

I wound down that week with a relaxing and beautiful evening at one of my favorite places in LA, and one of the most beautiful concert venues in the world, the Hollywood Bowl. Enjoying well-crafted cocktails and a fresh gourmet picnic basket from the Patina Restaurant Group there under the stars, we were entertained by a Ray Charles tribute, with Babyface, Martina McBride, BeBe Winans, and the Count Basie Orchestra lending their talent to the great man’s tunes.

This venue really is worth a visit, with many legendary artists performing soon, including Bob Dylan, Florence and the Machine, and Jason Mraz, and fireworks if you get the right night. It was a good job, some relaxing went on, in preparation for the geektastic crazython onslaught called ComicCon that was about to hit me…. 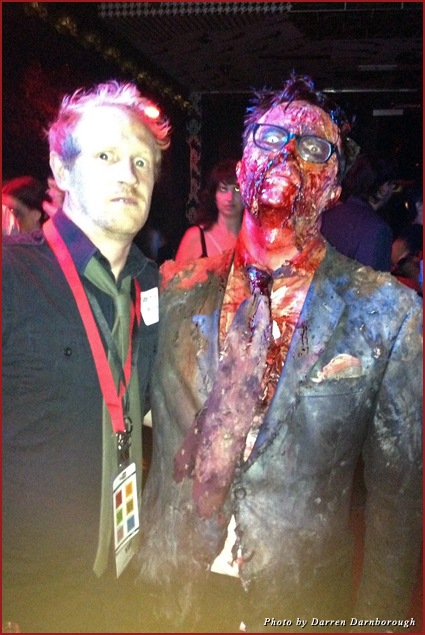 One of my favorite festivals in the world, ComicCon began as a cult convention for comic book lovers, but now includes anything slightly fantastical in the world of film, TV, and comics, with an insane amount of huge stars showing up to publicize their various new releases, take part in panels and events, and give breaking news on projects, all squished up with thousands of dedicated costumed fans roaming the streets of San Diego.

The randomness of superfans rubbing strange shoulders with superstars makes for an extremely fun and upbeat time, with every nook, cranny, and venue of the downtown area dressing up and immersing in the theme.

The first night we party-hopped from the Wired Cafe to the zombie-laden Fearnet party at Voyeur, passing through the AMP lounge and a surreal and philosophical conversation with the Double Rainbow YouTube guy, ending up at the Maxim/FX party, amid the superhard cast of Sons Of Anarchy, supersmall Elijah Wood and superhotties Maxim host Aja Dang and Katrina Law from Spartacus. 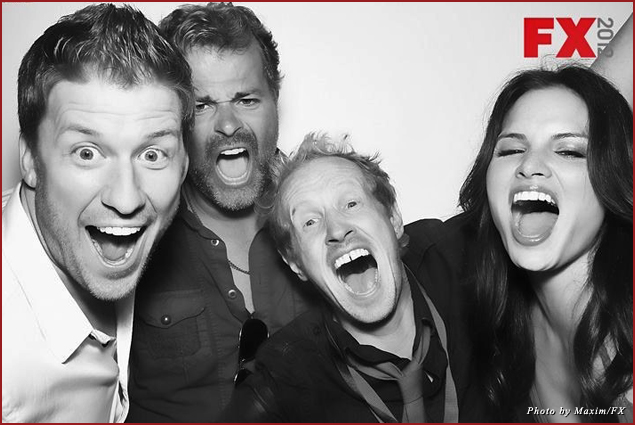 I rolled over to the next day for a more chilled lunch at the Hotel del Coronado with my good friend Lauren Cohan (Maggie Greene in one of my favourite shows, The Walking Dead) and some of its other stars and the producer of Breaking Bad, arguably the best television show in history of histories, which received its Season 5 premiere right there at ComicCon, and is bound to collect Emmys soon like Walter White collects dead bodies.

From there we hit the Writers Guild party (with a thud, you could’ve heard a pen drop) and then the Machinima party (which hit us back – hard – then picked us up with more liquor) ending up at the multi-zoned and glamor-themed True Blood / Playboy party, where the ‘coolest-dude-of-the-night-award’ had to go to a very hairy William H. Macy in a very fetching striped suit. 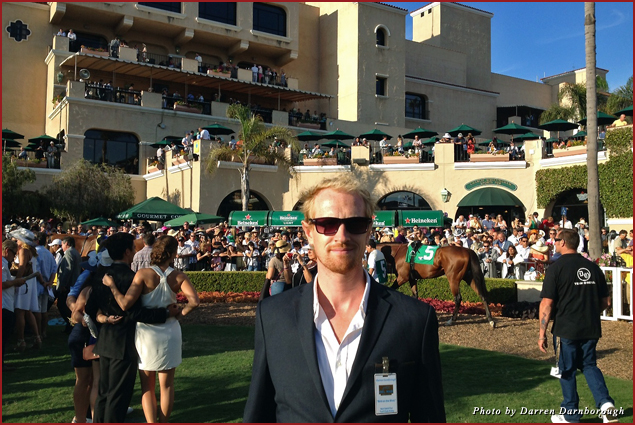 I was barely able to get a few days of LA recovery in, before heading southbound yet again for Opening Day at the Del Mar Racetrack, a hat-filled classy affair somewhat like ladies day at Ascot minus rain and royalty. My luck on the gee-gees was tragic, so back on home turf I joined the Brits in LA monthly Pub Crawl, from the Cat and Fiddle to the new ironically titled gastropub The Pikey, before rounding off the evening at the Churchill for comedy sensation Taryn Southern‘s birthday.

Drinking morphed to eating that weekend, at the fabulous LA Street Food Fest, which sees local restaurants pitching up at the Pasadena Rose Bowl, offering samplers of their best dishes. My food journey passed from tacos to grilled cheese to pigs ears and cows brains to gelato, with the standout winner in my opinion Starry Kitchen, a Vietnamese delight based in downtown LA. I relaxed off all those calories by boating the weekend away on the stunning Castaic Lake, a great local retreat from LA, and an overnight stay at the tranquil Ojai Rancho Inn. 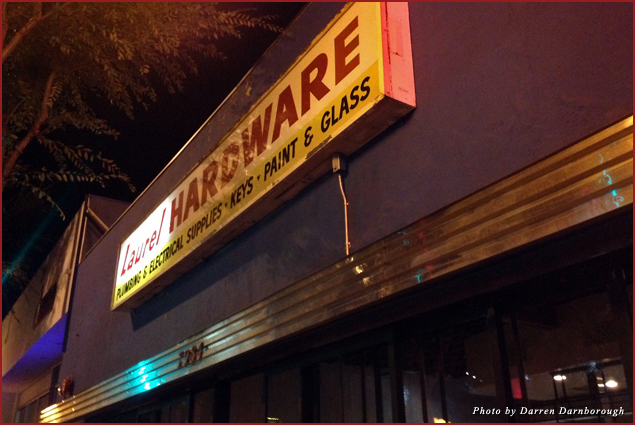 The poker-hot venue of choice for my midweek dinner was Laurel Hardware, a new bar-restaurant converted from a long-standing hardware store. With the street fascia unchanged, and decor lending itself to tools of the trade, dripping with the tools of the other trade (namely top Hollywood agents) this looks like it may become a temporary classic, just like the starlets sipping their Aqua Di Vida whilst the Creeping Fig spouts his latest success, but that aside, it’s a beautiful and fun lively spot to start or end an eve.

The end of July felt a little strange as some Brit-friends and I traipsed around Hollywood looking for somewhere that was showing Danny Boyle’s epic Olympics opening ceremony. Our friends at Irish hangout Rock and Reilly’s kindly catered (and endured our anthem-chorus) and it was a proud moment, but also one where we missed being in the homeland. The Games dominated the box for the next few weeks, whilst on the big screen I thoroughly enjoyed a screening of The Big Lebowski at Cinespia: outdoor screenings amidst the famous graves of the Hollywood Forever Cemetery. 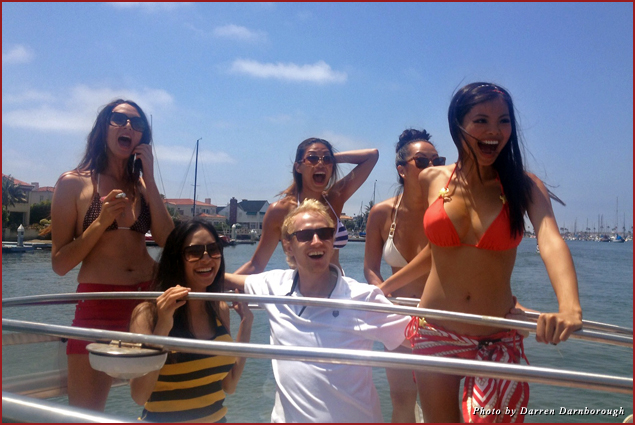 We dressed as Rockers and Ravers for actress Ali Costello’s themed birthday, and hid amongst multiple Freddy Kruegers at Mad Monster‘s anniversary screening of Nightmare on Elm Street: Dream Warriors at the famous Chinese Theater. 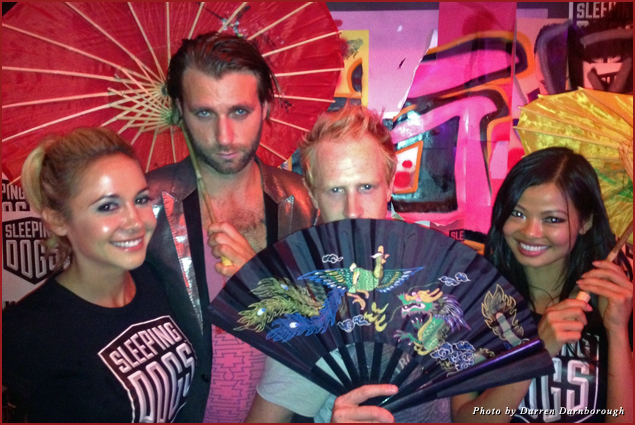 From one Krueger to another, I spent the next week very unglamorously in a derelict warehouse, filming my role of homeless warrior Ajax in new web-series and movie The Darkness Descending, penned by and starring Frank Krueger. I was excused from set long enough to stop by the Sunset Strip Music Fest, to watch hip hop classics De La Soul play an entertaining set, and to not-watch the Far East Movement, because they were far east, and not moving after being stuck in Tokyo. 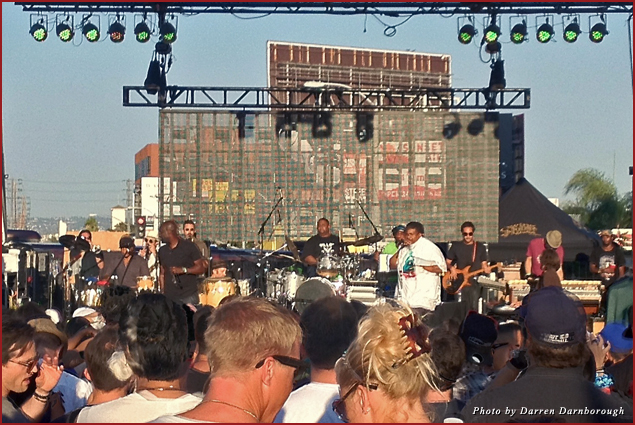 A few days later, however, I was back to my normal British self, after-partying sporting a bright pink “Pussay Patrol” t-shirt, sipping a Newcy Brown in the Kings Head, amongst the comical cast of The Inbetweeners Movie, which just opened Stateside, and quite frankly left me gagging… for another holiday! 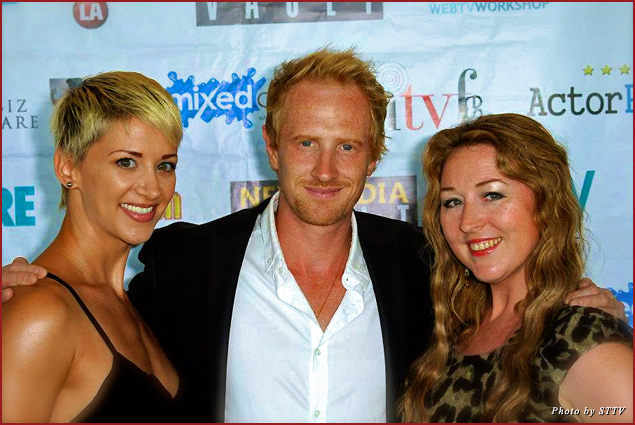