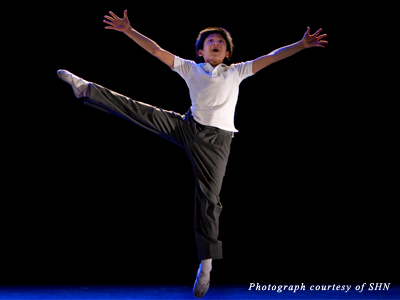 Not unlike the grand finale of holiday fireworks, 10-time Tony Award-winning Billy Elliot the Musical concludes the 2010-2011 SHN Broadway series under the direction of Carole Shorenstein Hays at Orpheum Theatre in San Francisco. Brimming with underage talent and featuring a constellation of adult performers, the show is a testament to the absolute power of performing arts over our imagination – who really needs a childhood if the alternative is showbiz? Written by Sir Elton John and reflecting his larger-than-life exuberance in every chord, the musical is based on the popular film with lyrics by Lee Hall, choreography by Peter Darling and direction by Stephen Daldry.

Tony Award-winner Faith Prince stars as Mrs. Wilkinson, a two-pence ballet teacher in a small British mining town devastated by a year-long strike. Bringing Billy to the realization of his vocation, she creates a stage character of an ideal mentor – kind, cynical, persistent, tenacious, and selflessly invested in her pupil’s success, purely for the sake of art. Five boys perform the title role in SF production on different dates – Ethan Fuller, Kylend Hetherington, Lex Ishimoto, Daniel Russell and J.P. Viernes. While I had a chance to see only the latter, something tells me none of them can be less than awesome. Also featured are Rich Hebert (Dad); Patti Perkins (Grandma); Jeff Kready (Tony); Joel Blum (George); Griffin Birney and Jacob Zelonky (Michael); and Rachel Mracna (Debbie). Adding to the mastery of the performers, scenic design was created by Ian MacNeil, costume design by Nicky Gillibrand, lighting design by Rick Fisher, and sound design by Paul Arditti with orchestrations by Martin Koch. The production has been awarded 73 national and international awards and now is a not-to-be-missed summer hit in San Francisco, running through September 17. SHN Orpheum Theatre is located at 1192 Market Street at 8th, San Francisco. Tickets available on their website or by calling 888 SHN 1799 (888 746 1799).