Beverly Hills: A Local Rediscovers the Golden Triangle and Beyond 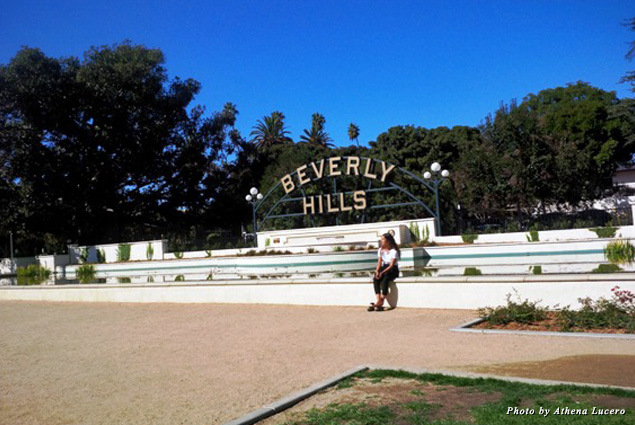 When Beverly Hills turned 100 last year (the city was incorporated on January 28, 1914), I decided it was time to get reacquainted with one of the world’s most iconic cities that is right in my own backyard. Truth be told, living on the opposite end of the Los Angeles metropolis I save treks to the west side for business—and for out-of-town guests who have Rodeo Drive on their must-see list.

This time, though, I was compelled to pay my respects to the eternally graceful Grand Dame before her milestone year struck midnight.

And while traffic is a given in Los Angeles, it helps to know there is free parking (for two hours) at parking garages around Beverly Hills. So I picked up a city map at the Visitor Center on Santa Monica Boulevard—two blocks from Rodeo Drive—put on my tourist cap, and had a blast discovering, again, the Golden Triangle.

The Golden Triangle? That’s the famous shopping district shaped by South Santa Monica Boulevard to the northwest, Wilshire Boulevard to the south, and Canon Drive to the east. Rodeo Drive is smack in the middle, lined with luxury brand shops—Chanel, Coach, Vera Wang, and gorgeously remodeled Gucci, to name just four legends—and the 88-room Luxe, the only hotel on Rodeo, with Rolex, Michael Kors, and Patek Philippe on the property.

Roaming the town on foot is easy because shops, restaurants, and attractions are close together. But if your shoes aren’t made for walking or if you’re short on time, hop onto the Beverly Hills Trolley at Two Rodeo Drive (home to the famous Spanish Steps) and Dayton Way for a 40-minute narrated tour. In addition to the shopping district and city architecture tour, guests will enjoy highlights of celebrity homes. 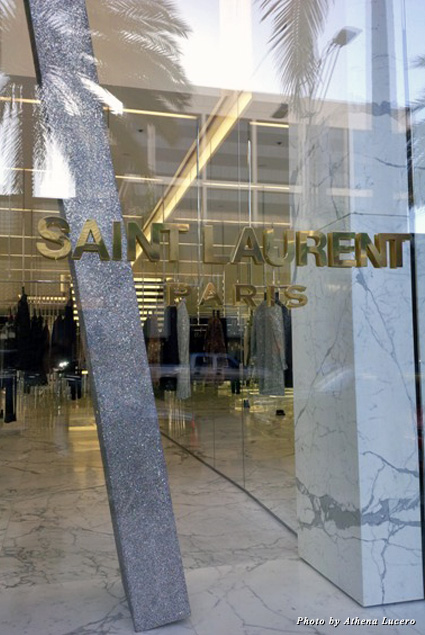 Beverly Hills is looking refreshed and younger than ever these days. The opening of new flagship stores—Burberry, Cos (Collection of Style, H&M’s sister label), DSquared2, St. Lauren Paris, and Zadig + Voltaire—have added a vibrant pulse. And coffee connoisseurs rejoice because Nespresso Boutique Bar, its largest United States flagship, will welcome you in style on Beverly Drive (I indulged in espresso tastings and a decadent iced espresso with vanilla ice cream and chocolate shavings). 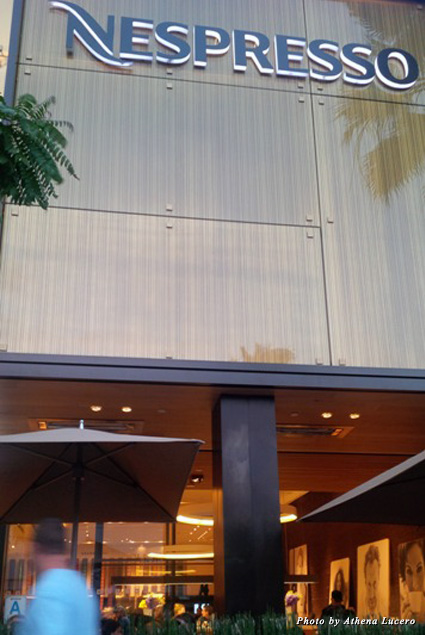 All this just might turn me into a fashion hound, and certainly a coffee snob.

Shiny gold lettering on the windows of St. Lauren Paris is sans Yves and the YSL logo, drawing attention to the French fashion house’s renaissance and new flagship (snatching the title from Paris). The 10,000-square-foot, three-story women’s boutique is its largest store (the men’s shop is up the block), and the gutsy revival of the line by creative designer Hedi Slimane is turning heads—“rock-inspired” LA chic tailored with timeless Parisian craftsmanship.

Italian label DSquared2 opened its first US store and flagship in the fall with two times the talent by identical twin brothers and creative designers Dan and Dean Caten. The store’s line has Los Angeles glam in mind—elegance with edge—and its interior design elements of forests and natural wood accents are a nod to the siblings’ Canadian roots. 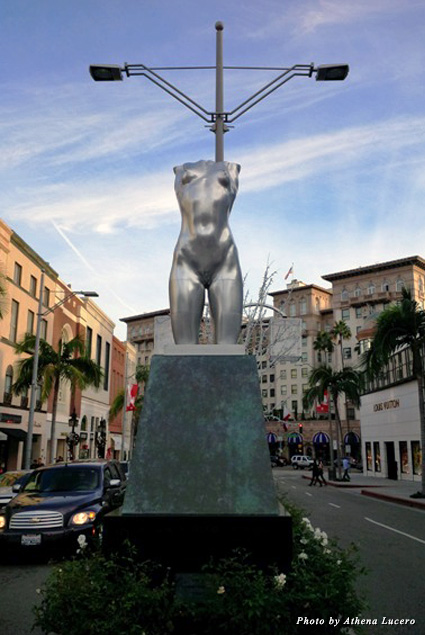 Trench coats are cooler than ever at Burberry’s new flagship. The British fashion brand established in 1856 is state of the art. Digitally minded shoppers are in for a high-tech experience, a concept uniquely conceived for its Los Angeles audience (think 10 video screens, 130 speakers, and RFID chips).

For a change of pace, scenery, and fresh air, I veered off the beaten path to take in oft-overlooked historic and cultural treasures just steps from the shopping district.

The history here predates the city’s modern-day renown for haute couture and celebrity sightings. “Rodeo” comes from Rodeo de las Aguas or the Gathering of the Waters, the name given to this once water-rich land during the late 18th century and considered a holy site by the native Tongva. And Wilshire Boulevard was once the dirt trail traveled by Spanish explorer Don Jose Gaspar de Portola when California was still part of Mexico. 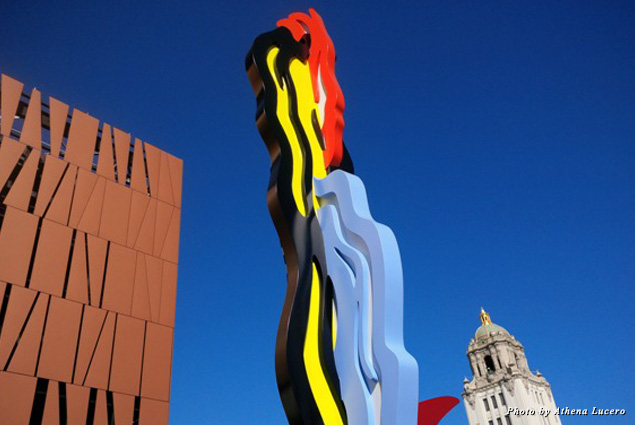 A 1.9-mile stretch of green along Santa Monica Boulevard (at the top of the triangle) is an official public park. Beverly Gardens Park, created in 1911, is a unique linear park and home to the famous 40-foot-long “Beverly Hills” sign and lily pond. Rose and cactus gardens, water fountains, and arbors invite passersby to relax with a latte, munch on a sandwich, or read a book under a shady tree. And walkers and joggers can stay on the move along the park’s decomposed granite path.

It’s often by accident that people discover the stunning Spanish Renaissance architecture of City Hall across from the park. Designed in 1932 by architect William Gage, the romantic landmark was built with marble, terrazzo floors, and a gilded cupola. The tiled eight-story tower symbolizing commerce stands like a beacon over city streets. Like many government buildings of the era the grounds are park-like with manicured gardens and lovely archways.

Nearby at the Fire Department (on the corner of South Santa Monica Boulevard and Rexford Drive), a 30-foot steel beam salvaged from the wreckage of the 9/11 World Trade Center tragedy is a monument in its remembrance that was dedicated on September 11, 2011. Granite benches surrounding the beam invite visitors to reflect.

A block away, where Santa Monica Boulevard intersects with Crescent Drive, the old post office has metamorphosed into the grand lobby of the new Wallis Annenberg Center for the Performing Arts that opened its doors in 2013. The magnificent marble interior has been preserved, and the counter that used to sell postage stamps is now Will Call. Juxtaposed on the south side is the contemporary 500-seat Goldsmith Theater, the eye-catching ultramodern half of “The Wallis.”

Fans of television, radio, and all things under the broadcasting umbrella can easily lose track of time at the Paley Center for Media, an extraordinary museum and an “American cultural institution” that I slipped into after browsing Crate & Barrel across the street. 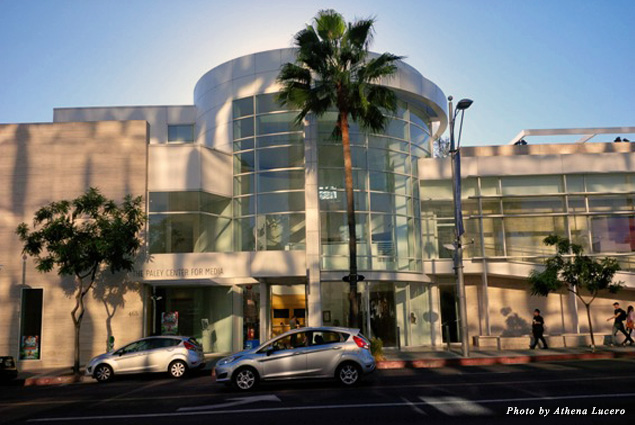 The stark white building was designed by architect Richard Meier, who also designed the Getty Museum. “Similar to the Getty,” explained Cindy Braun, director of operations, “high ceilings and large windows at the Paley create a sense of open space.”

Founded in 1975 by William S. Paley, broadcasting pioneer and founder of CBS, the center was originally called the Museum of Television and Radio. In 2007, it was renamed after its founder and to embrace today’s digital communications: the Internet, podcasting, and mobile technology.

With two locations—New York City and Los Angeles—the Paley is an archive (watch or listen to old and current television and radio shows); a museum with rotating exhibits, such as this year’s “The Making of Bullwinkle”; and a screening venue and educational facility with live programming, including Q&A sessions with producers and cast members.

According to Braun, attendance at the Paley varies. “Daytime tends to bring tourists,” she said, “while in the evenings we usually see television fans, locals, and industry professionals.” Admission to the museum is free (except special events), although membership does have its privileges.

Back on the streets, my taste buds were teased into temptation by sweet shops that are destinations themselves: Sugarfina, Sprinkles Cupcakes (with a cupcake ATM), The Beverly Hills Brownie Company, Voges Haute-Chocolat, and the legendary Edelweiss Chocolates (since 1942), where Lucille Ball, who was a regular customer, brainstormed and filmed the unforgettable chocolate factory episode of “I Love Lucy.” 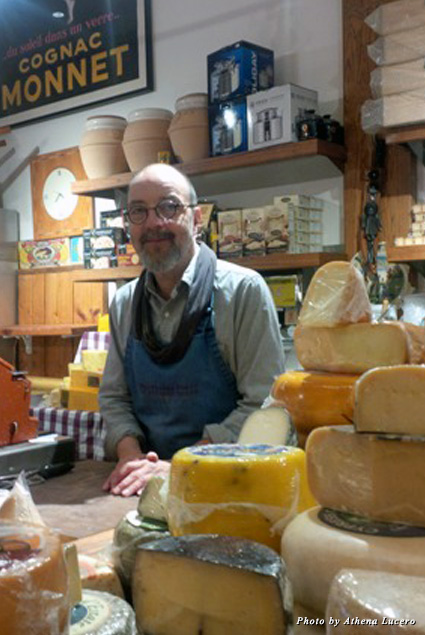 With my eyes closed I can sniff my way to the Cheese Store of Beverly Hills on Beverly Drive, where the glorious odor of hundreds of cheeses (more than 500) lures me through its doors. Owned by Norbert Wabnig since 1978, this slice of a shop looks like it was plucked right off the Alps. Wabnig and his multi-lingual staff happily offer cheese samples. Cheese lovers, foodies, locals, and celebs shop here not just for cheese but also gorgeous olive oils, wines, chocolates, rare caviars, and many more delectable items.

It’s not a bad idea to enjoy the sweet stuff before a real meal because you’ll never have room for it afterwards. More than 40 fine and casual restaurants and cafés offer a world of cuisines: American, French, Italian, Mexican, Venezuelan, Chinese, Japanese, Korean, Indian, and Vietnamese.

Just outside the triangle on Wilshire Boulevard, my husband and I savored divine Chinese dishes at Philippe Chow. Famous hand-pulled noodles, nine-season spicy prawns, duck spring rolls, chicken satay, and crispy seaweed with walnuts were among the family-style plates that wowed our taste buds.

Following the success of the original Philippe Chow in New York City, this location is renowned chef Philippe Chow’s first in Los Angeles, which opened its doors in Beverly Hills in 2013. The exterior is discreet (look for the stark white building with “Philippe” above its doors). But once inside, an exotic ambiance welcomes guests with Philippe Chow’s signature colors of red and black. 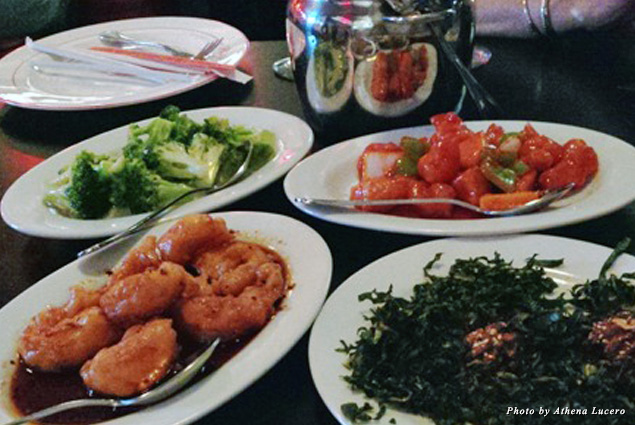 Lodging in Beverly Hills is plentiful and comes in all sizes, from luxurious and grand landmarks—The Montage, The Peninsula, The Beverly Hills Hotel, and Beverly Wilshire Hotel—to intimate and charming boutique hotels on quiet tree-lined streets within walking of the triangle—Sirtaj, The Mosaic, Maison 140, and Avalon. 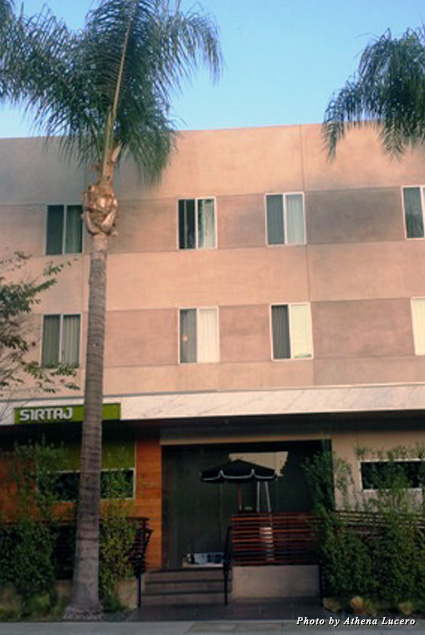 Sirtaj Hotel is a 32-room oasis off Wilshire Boulevard within a few minutes’ walk of Rodeo Drive—a lovely respite from the bustle of the shopping district. Besides the hotel’s sleek yet casual setting across the street from a sweet neighborhood park, its restaurant, p.s. Beverly Hills, blew me away with world-class Indian cuisine prepared by chef Sanjay Jaitly, whose repertoire includes Michelin-starred restaurants. The restaurant also serves American breakfast and valet parking is free for diners for up to two hours. This just might be the bait to lure me to Beverly Hills more often.