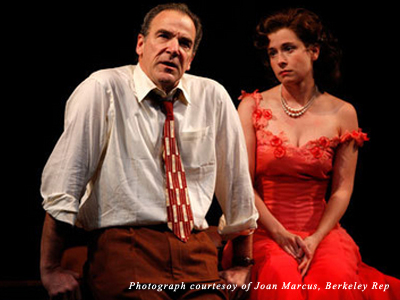 I measure every Grief I meet
With narrow, probing Eyes –
I wonder if It weighs like Mine –
Or has an Easier size.
– Emily Dickinson

With the world premiere of Rinne Groff’s Compulsion, Berkeley Repertory Theatre opened its new season with a new, higher level of theatrical accomplishment. By navigating the darkest and most complex depths of recent history and modern psychology, the plot emerges with a trophy of enlightenment, delivering a viable message of understanding and humanity. Directed by Oskar Eustis, and performed by an ingenious cast of Mandy Patinkin, Hannah Cabell, and Matte Osian, the play unfolds in different individual worlds, and on different historical planes.

They are populated by multiple characters all performed by the trio of actors as well as by marionettes, operated by Emily DeCola, Daniel Fay, and Eric Wright (puppet design by Matt Acheson). The main character, Sid Silver, based on a real-life prolific writer and WWII war correspondent, Meyer Levin, dedicates his life to creating a stage adaptation of the famous “Diary of Anne Frank,” and is distraught by the other adaptors’ ways of muting what he considers the most important message of the book. No matter how many millions of people worldwide can relate to the young girl’s suffering and struggle, and her doomed hopes and dreams, for Sid Silver, the point of Anne’s phenomenon lies in the fact that she died in a Nazi camp for being a Jew. With all her writing talent and moral resilience, with all her grace and purity of character, for Sid, Anne Frank is just one of countless young girls, suffocated in gas chambers and burnt in camp crematoriums, whose names were erased from history and memory forever. In the very universality of Anne’s image he sees betrayal, tirelessly insisting on the monstrosity of the world that allowed the circumstances under which she perished. In his attempts to own grieve and protect his ideals and his idea of what’s right, Sid plunges into irrational behavior, hurting himself and those who love and admire him, but his strength and dedication inevitably calls for compassion. Compulsion is a must-see – genuine, true to reality, and attention-grappling. Runs through October 31 at Berkeley Repertory Theatre’s Thrust Stage, 2025 Addison Street, Berkeley, California. Tickets: 1-510-647-2949 or online.

Too Cool for Skool? Staring at Starry Night at the de Young Museum