Behind the Scenes at the Fabulous Palm Springs Follies 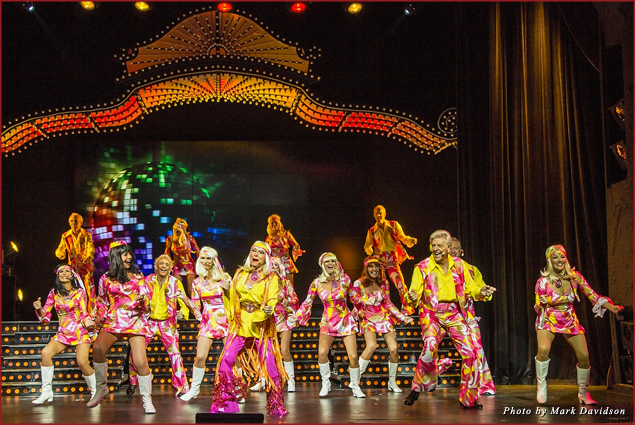 Like a martini at Melvyn’s, a shopping spree along El Paseo, a dip in a sun-kissed pool …  If you haven’t been to the Fabulous Palm Springs Follies, you haven’t been to Palm Springs! For 22 smash hit years, the glamorous 50- to 80-something Broadway, television, and movie guys and dolls of the Follies Company have danced their way across the stage at the historic Plaza Theatre and into the star-studded lore of this celebrity-centric town. Barry Manilow and other resident superstars have been known to slip into a balcony seat and watch the glittery mix of Las Vegas showgirls and boys, headline entertainers, and top-shelf variety acts.

Now for the first time ever we can go backstage and see what happens behind closed curtains. And that’s only the beginning: After the show, we can join the cast for drinks and dinner at some of Palm Springs’ favorite restaurants—and ask them anything.

I recently joined a backstage tour and got up close and personal with the producers, iconic Follies dancers Randy Doney, 73, and Suzanne Vitale, 74, and the cranky old—oops—make that feisty emcee, Riff Markowitz, aka “the Follies Man.” Then I enjoyed the show—this season’s “Dance to the Music”—with headliner Lesley Gore, high-energy psychedelic go-go dancers, tributes to the Beatles and Rolling Stones, and an amazing hoola hoop act—yes, really. I capped off the evening with Follies dancers Karrie and Dick France and Riff, again—he’s everywhere—over drinks and dinner at the Kaiser Grille in downtown Palm Springs. 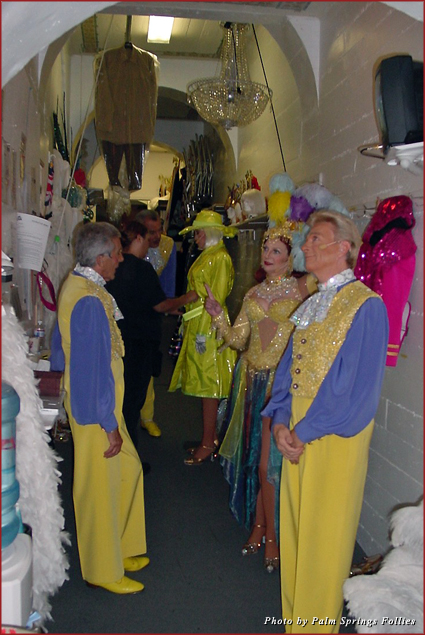 Here’s the scoop about what really goes on backstage at the Fabulous Palm Springs Follies. Traipsing through a narrow cast only corridor, I caught up with Follies dancers Randy and Suzanne. Randy—still a heartthrob—danced on Broadway in countless shows including “Camelot” and “La Cage Aux Folles,” was on “The Carol Burnett Show” for years, was a tap-dancing psychiatrist on “Frasier,” and appeared in “Blazing Saddles” and other movies. Sexy Suzanne’s credits include dancing in the national companies of “Li’l Abner” and “My Fair Lady,” which were touring Russia during the Cold War. “The costumes get more risqué with each new show; how do you feel about that?” I asked Suzanne. “I’m a showgirl. I wear what I’m given,” she replied with a laugh. 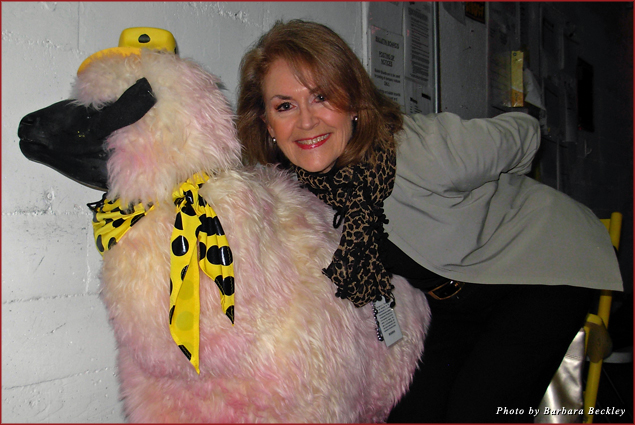 “They squeeze into this tiny space?!” The woman in front of me was amazed. We’d just entered the cast only North Corridor, a long narrow passageway crowded with props and sequined costumes hanging from the rafters. A fake sheep just had to be hugged, as did the big, white bear heads. I recognized the bears from the Christmas show; they star in the “Spending Hanukah in Santa Monica” number. Now they’re country bears in this season’s glitzy salute to the music and dance of the ’40s to the ’70s—heavy on the Boomer hip ’60s and ’70s. 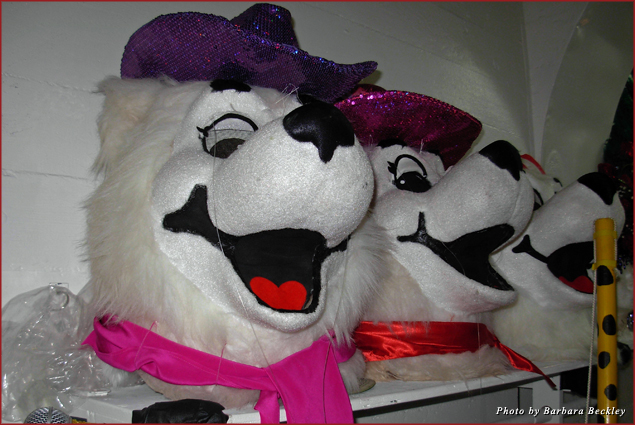 A red tile staircase leading to a closed door and another descending to the bowels of the building caught my eye. Opened in 1936, the historic Plaza Theatre was built as a cinema. “It was never intended for live entertainment so we improvise,” Leah Gordon, our tour leader and 20-something production manager, explained. “The up stairs access the green room, where Riff enters on stage. The down steps go to the old boiler room, now the cast dressing rooms.” Proof, Leah added, of the cast’s ageless vitality, since they run up and down the stairs—in heels—countless times a show. 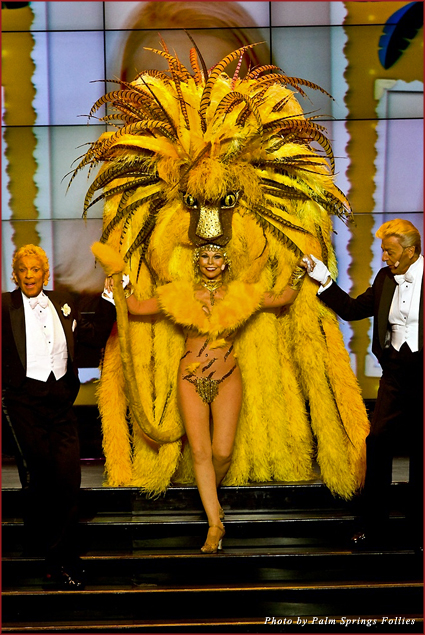 Walking onto the stage I was stunned by how small it is. It looks way larger from the seats. A dramatic “backpack” (we learn the lingo, too), one of those flamboyant backdrop-like attachments showgirls wear, is on display. Backpacks can weight up to 50 pounds, Leah said. No wonder the tuxedoed chorus men lend a hand to the Follies women who wear them—in stilettos—parading down stairs and looking straight ahead. I couldn’t resist posing in front of a backpack or two … dream on…. Exiting stage right into the South Corridor, we squeezed into the tiny space where costume changes are done—in 20 to 120 seconds. “What you see as buttoned suits and zippered gowns are really held together with Velcro. All the costumes are custom designed and sewn in-house. Mr. Markowitz inspects every one; he’s very particular,” Leah confided. Riff joins our group, and the fun begins. “Ask us anything,” he dares. So we do. “Is there a phantom of the Follies?” “Has anything unusual happened on opening night?” “Does the cast have to audition for each season?” I ask again. “Yes,” Riff answers. “We get hundreds of applications. In May, the top contenders fly in from across the country to audition.” 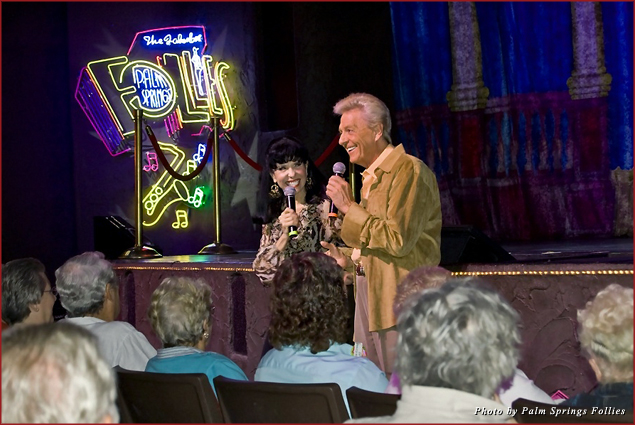 After the performance, those of us who purchased Dinner with the Cast tickets were off to the popular Kaiser Grille to hob-knob with the talent. Dancers Karrie, 54, and Dick France, 84, Riff, and members of the production crew chatted with us, posed for pictures, and joined us for the three-course dinner as if we were long-time friends. Sipping a no-host glass of wine with me, Karrie confided this was her first season with the Follies. She auditioned three times, she said, but was too young. Now, at 54, she finally made the cut. 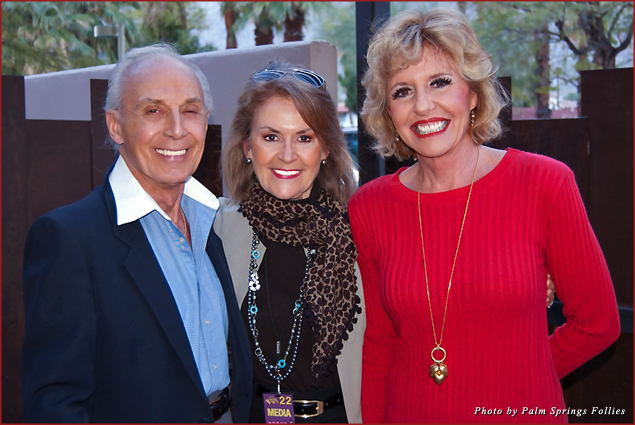 Dick, 84, was twinkly eyed and full of stories. “What was Ed Sullivan like?” a dinner companion asked. (“The Ed Sullivan Show” and Broadway shows including “Pal Joey,” where he understudied the lead and played the leading role numerous times, are only the beginning of Dick’s long list of credits). “We never knew,” Dick revealed. “Mr. Sullivan just arrived, did the show, and left. We never saw him.” The evening was leisurely, a genuine opportunity to get to know these charming and talented entertainers. “It was a fantastic opportunity,” Lu Schroeder of Denver said to me. “We were so lucky to be at Dick France’s table!”

The new Backstage Tour and the “Dinner with the Cast” series are available to individuals and groups with the matinee shows only. Reservations are a must. Visit the website for details.