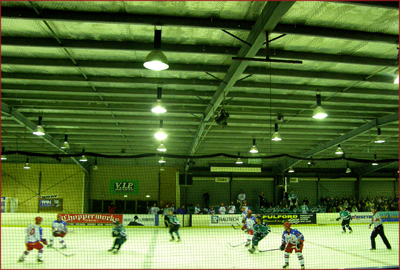 I have to write about this one for no other reason than that it exists. Ice hockey. In Australia.

As an American citizen living in Australia, I try to write about things that typify my new home, not my old. However, this is one old friend that brought me enough enjoyment that others should know about it.

Usually “hockey” in Australia refers to the field variety, but there is a seven-team Australian Ice Hockey League (AIHL), of which the local Canberra Knights are a part of. The season runs from April to August, with typically 12 home games and 12 on the road. The league is deceptively small – the Canberra Knights are in their 27th season as Australia’s longest-running ice hockey team, and a handful of the AIHL’s semi-professional players have gone on to play for the NHL in the past ten years.

The Knights play at the Philip Swimming and Ice Skating Centre (directions below). Without the Australian flag, you could be at any regional rink in Canada or the northern U.S. It was more crowded than I expected it to be – a sign of a good game – and it’s a good idea to arrive early as the rink has open seating. I wore my Buffalo Sabres jersey to represent the old hometown, and was surrounded by a good blend of U.S. and Canadian expats wearing their NHL jerseys, but even more locals wearing that of the home team.

We saw them play on a Saturday night against the Newcastle North Stars. I won’t claim that we watched the purest hockey, or the most-skilled hockey, but it was still hockey. Even if you’re unfamiliar with the game, not a born-and-bred fan like me, it’s worth watching live at least once. The speed, skill, coordination, and fast-changing nature of the game makes it a truly enjoyable night out. In fact, it’s touted by the AIHL as the “World’s Fastest Team Sport.” And, at a smaller rink such as that in Phillip, you have the chance to watch the action up close – often scarily close.

I wish I could say the Canberra Knights won the first match we watched, but no such luck. In fact, it was a messy game full of penalty after penalty and more ‘misconduct’ calls than I can ever remember seeing. Canberra fell from their 3-1 lead in the second period to lose 6-3.

But, especially for newcomers, a messy game is often just as fun as a clean one. 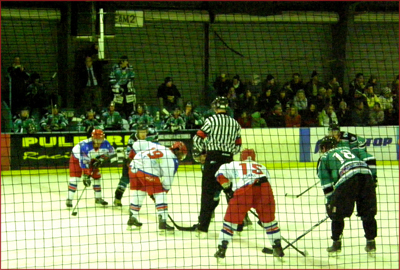 Tickets to a game are $15, and the full season schedule is available online.

To reach the Phillip Swimming and Ice Skating Centre from Canberra’s CBD take Adelaide Avenue from Capital Circle about 2.5km. Continue on to Yarra Glen for 3km, turn left on Melrose Drive, left on Launceston, then left on Irving Street and the destination will be on your left.