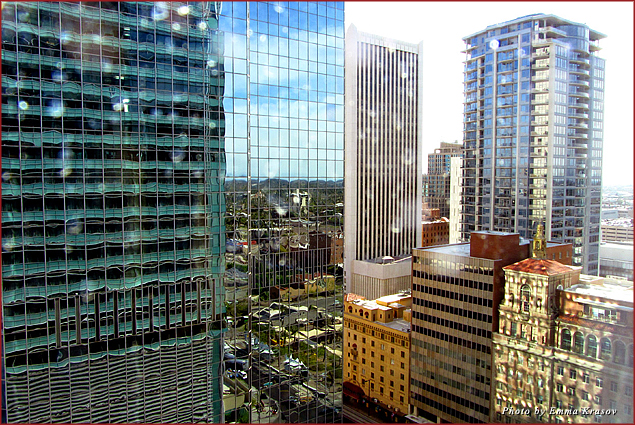 Arizona celebrates 100 years of statehood in 2012, and I happened to mark the centenary by visiting the city of Phoenix and its environs this spring. Guess which of Arizona’s five Cs impressed me the most? Out of Copper, Cattle, Cotton, Citrus, and Climate, it’s the latter, of course. The Arizona desert climate is dry, sunny, and endlessly endearing, especially when it’s wet and windy in the rest of the country.

I also appreciated the other four Cs – I was impressed with the brazen amount of copper everywhere. Copper cocktail mugs at Hanny’s – a sleek modern bar in its namesake former department store; copper salt and pepper shakers at various restaurants; copper door handles, railings, and banisters in public buildings, etc., etc. 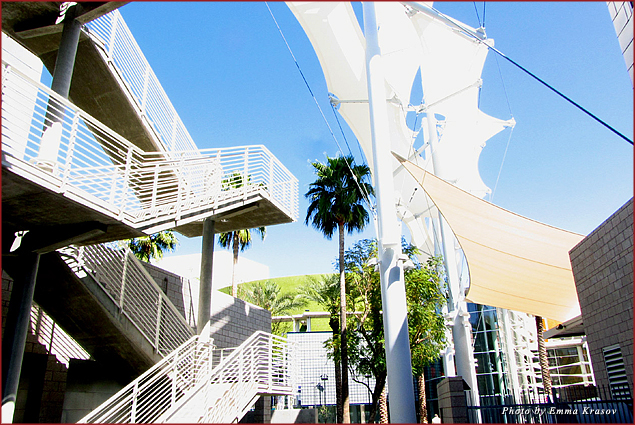 I even engaged in making a copper jewelry piece at the Mesa Arts Center – the largest in the state, with four theatres, five galleries, and 14 visual- and performing-arts studios on its lovingly designed seven-acre campus.

And don’t get me started on Arizona citrus! Better get a fresh-squeezed orange or grapefruit juice at The Breakfast Club, located in downtown Phoenix in a constantly growing oasis of ambitious architecture, public art, and fine dining establishments.

District American Kitchen and Wine Bar occupies the first floor of the Sheraton Phoenix Downtown Hotel – the largest in the state – with 1,000 guest rooms and an enviable modern-art display in its soaring atrium. 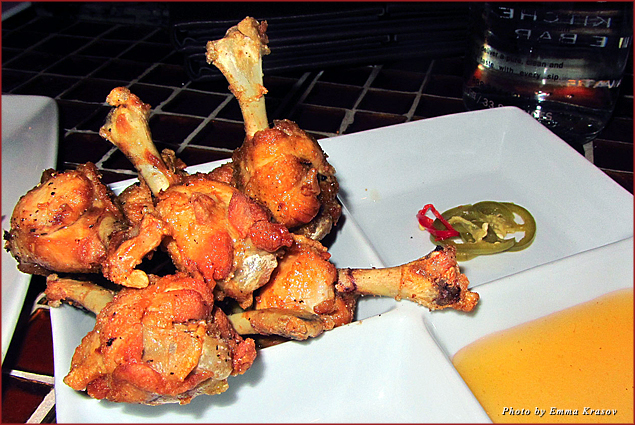 The state-of-the-art restaurant serves local delicacies, like bacon-wrapped Arizona-grown dates, chicken wings from Singh Farms in Scottsdale, and the freshest herbs and vegetables from the hotel’s own rooftop garden. The property implemented a triple-filtered water system that uses ultraviolet light to purify water that then fills Sheraton-logo water bottles used at the restaurant.

The Arizona locavore movement – the push to eat locally grown or produced food – is gaining more and more followers and is growing fast.

On a regular weekend, families with children and bachelorette parties alike travel to Queen Creek Olive Mill just outside Mesa for wine, beer, oil, or stuffed olives. It is the only surviving family-owned farm and olive mill engaged in growing and pressing its own fruit, and producing an endless variety of infused oils, sauces, preserves, and jams. 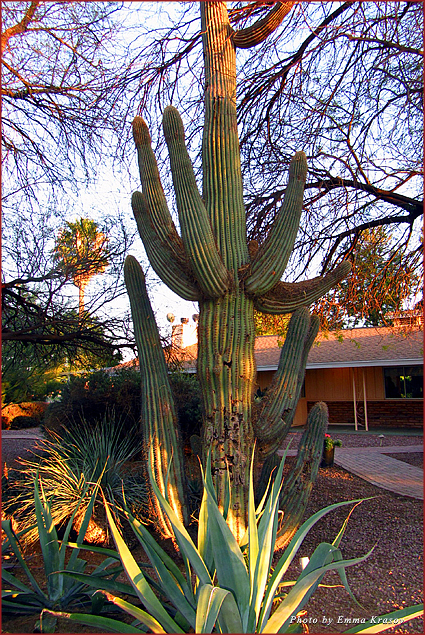 Dinners Down the Orchard are in high demand at Schnepf Farms – the largest peach grower in Arizona. Open to the public and served in the peach orchard of the family farm several times a year, dinners are prepared by famous guest chefs and include seasonal ingredients and fruit-based desserts.

There is no shortage of upscale eateries in Greater Phoenix with its many high-end hotels for business travelers and snowbird vacationers. 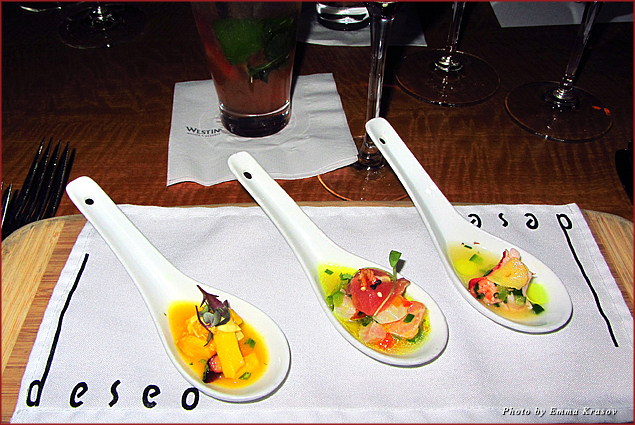 Deseo (meaning “desire”) at the Westin Kierland Resort and Spa in Scottsdale is one of those elegant venues, serving sophisticated drinks like muddled strawberry mojitos; delectable ceviche with lobster, crab, shrimp, and tuna; Kobe beef on Cuban flat bread, and signature lamb cutlets with truffle chimichurri.

The best place for a royally luxurious Arizona experience is also located (not surprisingly) in Scottsdale, and is easily recognized by its royal title.

The Fairmont Scottsdale Princess is a rose-colored dream equipped with rose gardens; green lawns with resident rabbits; tranquil guest villas; enticing shops and restaurants; a swanky outdoor Stone Rose bar with fire pits over a pool; the elite Fairmont Gold Lounge, and “a sanctuary within a sanctuary” – the Willow Stream Spa. 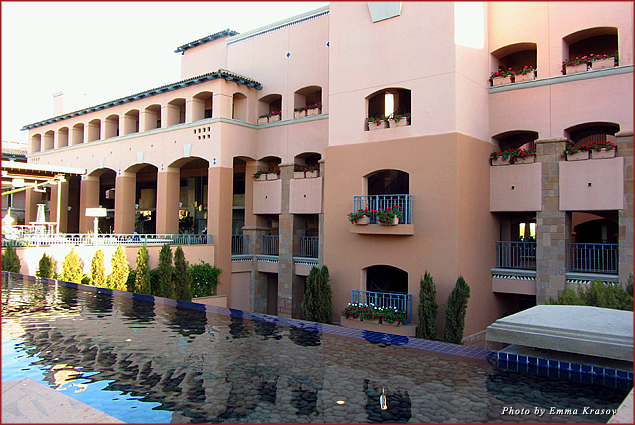 If the last time you felt like a princess happened to be on some long-gone day of sheer happiness, you surely have a chance to bring back the magic by having the ultimate spa experience at the Willow Stream’s rooftop pool or under a waterfall that cascades from it to the therapy pool below. The multi-level spa design was fittingly inspired by Havasu Falls within the Grand Canyon.

During my Hacienda Retreat body treatment I was scrubbed with yellow corn and lime body polish, massaged with sunflower oil mojito body butter, and polished with desert rose moisturizer. Good enough to eat, I was also hungry, and happy to join the signature Snakebite Tequila Tasting at one of the hotel’s restaurants – La Hacienda.

Fine dining at La Hacienda leaves a lasting impression, not just because of the stuffed rattlesnake heads that decorate the top-shelf tequila flights. The prickly-pear margarita is made with the juice of a cactus fruit, and tastes absolutely divine. The freshest guacamole is prepared tableside, as is the flaming coffee of various flavors. Hot-from-the-oven cinnamon churros are served with chili-chocolate fondue. 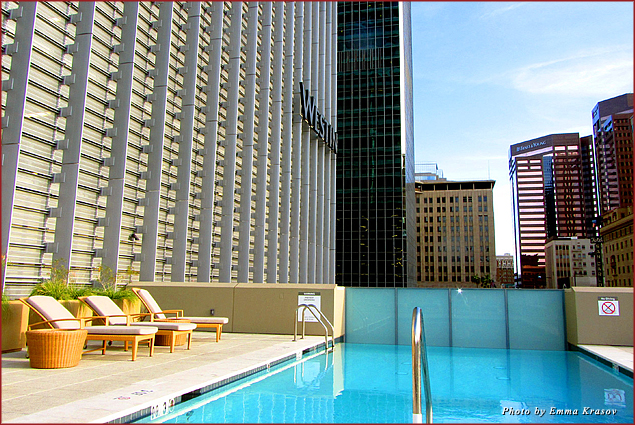 Of course, if you want to stay and play in downtown, the Westin Phoenix Downtown is brand-spanking-new and is already one of the top-10 new hotels in the country. Its modern minimalist décor, clean lines, noble color scheme, and overall sophistication in ambiance and service are only rivaled by the amazing views of the high-rises outside its glass walls and from its rooftop open-air pool.

Downtown Phoenix unfolds outside the Westin walls with all its old and newly added attractions, like the expanded Phoenix Convention Center; the recently added light-rail system; the urban campus of Arizona State U; a retail, dining and entertaining district named CityScape; and newly renovated performance art venues and museums. 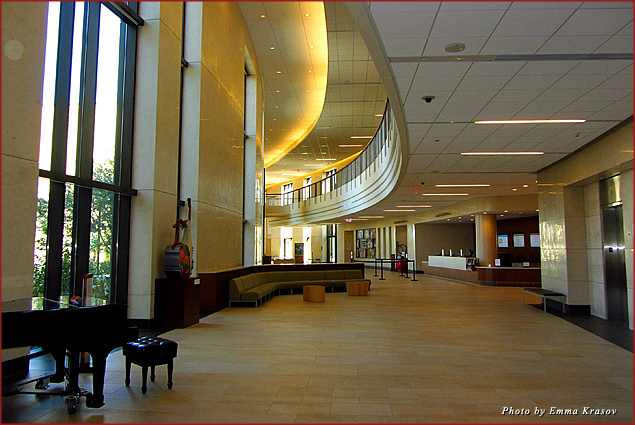 One of the not-to-be-missed venues is the Musical Instruments Museum (MIM) which offers much more excitement than its name implies. Opened only two years ago and occupying a two-story, 190,000-square-foot building, the museum boasts a mind-boggling 5,000-piece collection of musical instruments from around the world and from different time periods. There are drums, guitars, and pianos owned and used by world-renowned celebrities; and hand-made folk music treasures adorned with mother of pearl, etchings, and elaborate designs. There are ceremonial costumes and stage outfits; live recordings of the Beatles, and the best opera performances. But the most fascinating experiences are offered through the wireless headphones and hi-res video screens that come to life without you pushing any buttons or searching for explanations whenever you enter their zone. Prepare to be amazed, and to spend much more time here than you usually spend at a museum.

The Heard Museum is all about the history and art of the Southwestern Native American tribes and their unique contributions to the cultural quilt of Arizona. Maps, narratives, historical artifacts, and hundreds of pieces of traditional basketry, pottery, and jewelry are on display here. Alongside the permanent collection of arts and crafts the museum hosts traveling exhibitions. An important new show, “Through the Lens: Diné Photographers,” will open June 12, 2012.On loan from the Navajo Nation Museum in Window Rock, Arizona, this exhibition presents contemporary Navajo photographers showcasing their land and contemporary life.

Thanks to relatively short distances and lighter traffic, all of these sites in Greater Phoenix are accessible by car. Arizona Outback Adventures (AOA) offers daily transportation for vacationers and business travelers as well as guided hiking and biking tours, bicycle rentals, and trips to the Grand Canyon, Northern and Southern Arizona, and Utah.

Arizona in Spring: The Biltmore Are You in Town for Memorial Day Weekend?