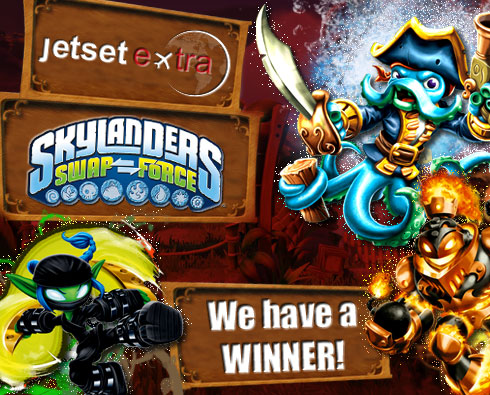 A love for gaming and for exploring new locales combine in the new “Skylanders SWAP Force™”, which was released in October. For the first time, a video game world has virtually partnered with a real destination, with the mythical Skylands mirroring Scotland’s Isle of Skye. “The Isle of Skye is renowned for its stunning landscapes, which possess an almost ethereal quality, and its abundance of wildlife, making it the perfect place to virtually twin with Skylands, home to Skylanders SWAP Force,” Alan Mackenzie of VisitScotland says. Want to see it for yourself? Keep reading to see if you won our giveaway!

The Skylanders franchise pioneered the genre of “bringing toys to life” by combining physical figures with the virtual world of video games. Skylanders SWAP Force builds upon this success with its signature gameplay and collectible toy experience.

Within this new game, an epic battle caught the SWAP Force in a volcano eruption that sent them to Earth and gave them the ability to swap powers. Using a play pattern called “swapability,” gamers who have purchased all 16 SWAP Force inter-action figures can reconfigure them into more than 250 unique characters by swapping their top and bottom halves. Mix and match the SWAP Force members’ tops and bottoms, put them on the new Portal of Power™, and help save Skylands!

And the winner is … Bruce Robinson! Congratulations!

It’s always easy to enter a Jetset Extra giveaway. Check back for your next chance to win!