Alive and Well in Bangkok 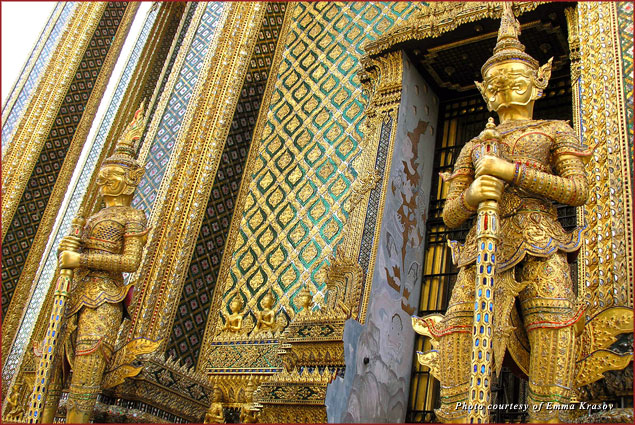 “So you are back, alive and well; that’s already good,” said my Doc the other day. I went to see my family physician mostly to address some annoying sunburns I endured while skimming the beaches of the Gulf of Thailand. Before my long-anticipated trip to The Land of Smiles, I was advised to vaccinate, carry strong antibiotics just in case, and never ever eat street food. Some friends expressed other safety concerns, but couldn’t answer a simple question—how safe they felt staying at home. A convinced optimist, I was inspired by visions of graceful dancers with outstretched fingertips, golden Buddhas, and purple orchids, and so I went. 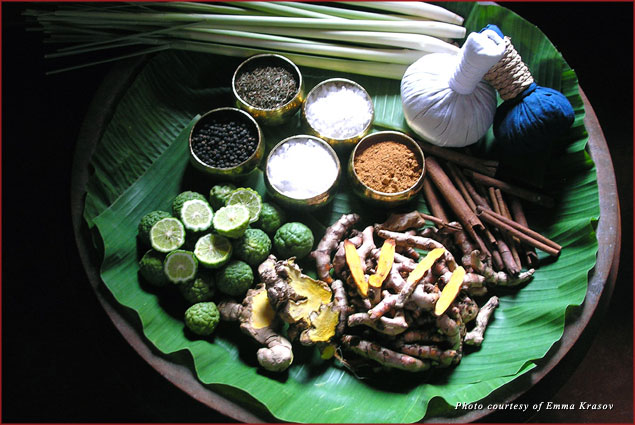 Our touring group arrived in Bangkok via Thai Airways, whose motto, Smooth as Silk, inspired both the smooth ride and the smiley attentive service. Dressed in brocaded Thai silk, and adorned with purple orchid flowers, stewardesses tended to the passengers’ every whim, distributing blankets and magazines, pouring cocktails, helping with video, and offering fresh fruit and sandwiches in between three substantial meals. Comfortable leg room and more elbow space than in any domestic US carrier allowed for a non-tiring flight that didn’t even seem that long. 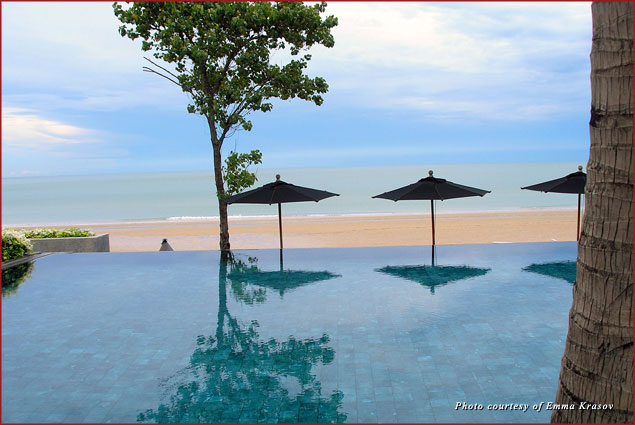 From the airport, we took a relaxing air-conditioned bus ride to Hua Hin. It’s a prestigious resort area not far from Bangkok, graced with a royal palace and a string of luxurious hotels. Hilton Hua Hin Resort & Spa is located right on the beach in the center of town. It serves over-the-top buffet breakfasts, fortified with fragrant tropical fruit and a rainbow of juices. All rooms have spectacular views and private balconies, and a terrace bar overlooks the giant free-form pool, framed by swaying palms. Hyatt Regency Hua Hin boasts The Barai spa, as much an architectural gem as it is a sophisticated treatment center designed to induce serenity and tranquility with the help of four natural elements—Water, Earth, Air, and Fire—believed to bring their unique qualities to the methods of physical and spiritual rejuvenation of humans. At The Barai, our group participated in an herbal compress class, offered on premises. A hot compress massage, Luk Prakop, involves a variety of aromatic herbs, spices, and fruit chunks tightly wrapped in white linen, then steamed and pressed against a pulled muscle or an aching joint. Chiva-Som is a very special health resort with secluded guest houses inspired by Thai traditional architecture, clustered in the midst of tropical gardens, lakes, and waterfalls. It offers packages for natural healing, yoga, detox, weight management, and physical renewal that include special diet, daily meditation, and a variety of fitness classes. 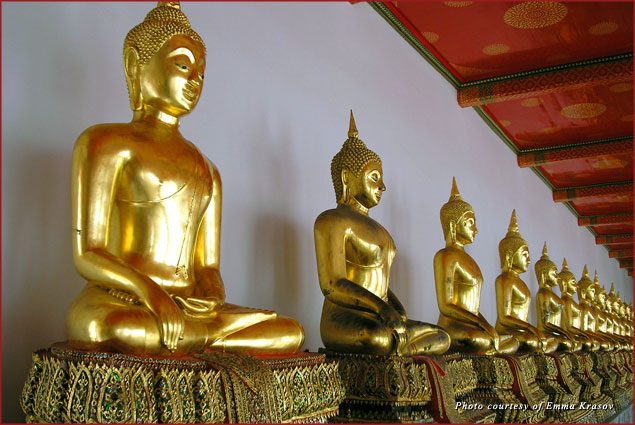 At V Villas Hua Hin we stopped for “Western” lunch. Roasted cod fillet with bacon mashed and baby vegetables in horseradish cream sauce never tasted so good in the West. The restaurant was overlooking a pristine strip of sand with beach umbrellas, and an infinity pool, almost overflowing into the sea.

After all the indulgence and relaxation of the retreat, I was looking forward to the historical and architectural wonders of Bangkok. Mere words cannot begin to describe the exquisite beauty of its temples and palaces. Suffice it to say that on our visit to the Royal Grand Palace I completely filled a memory card in my camera, driven by some kind of photo frenzy. 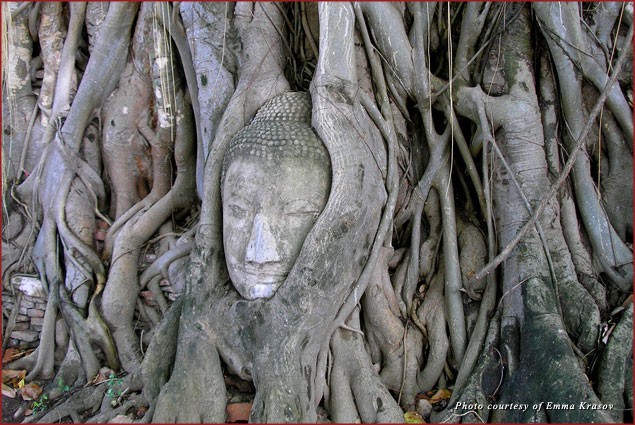 Before entering the palace we were asked to dress appropriately, so there I was, covered neck to toe in 95-degree heat, and with a borrowed sarong over my skimpy shorts. This tiny inconvenience surprisingly added a touch of authenticity to the overwhelmingly joyous experience. There was a magic kingdom of Ramayana, presented in endless wall murals, and the pantheon of Siam’s heavenly creatures incarnated in whimsical sculptures hidden in every nook and cranny of the palace, framing every rooftop, frieze and banister, guarded by the giant statues of fierce demons with bulging eyes and bared fangs. Then there was the temple of the Emerald Buddha, Wat Phra Kaew, intricately decorated, and endlessly revered by the devotees from near and far. 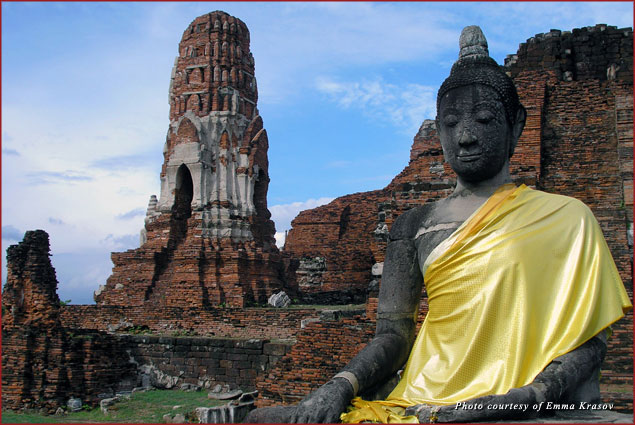 In Wat Trimit temple, an awe-inspiring solid gold 5.5-ton 3-meter-high Buddha towered over the never-stopping stream of worshippers and tourists.

Then the most grandiose, gigantic, absolutely fascinating statue of the Reclining Buddha was, well, reclining in all its enormous glory in Wat Phra Chetuphon, a temple on the site of the first Thai university with the world-famous “Wat Pho” massage school, still in session since the 16th century.

That evening, Siam Niramit show, dedicated to the history and cultural traditions of the many peoples of Thailand, was a perfect finale to the art-filled day. One of the largest stage productions in the world, with 150 performers, 500 elaborate costumes and wonderful special effects, it was the place to see my favorite Thai dancers and all the visual glamour that always surrounds them. 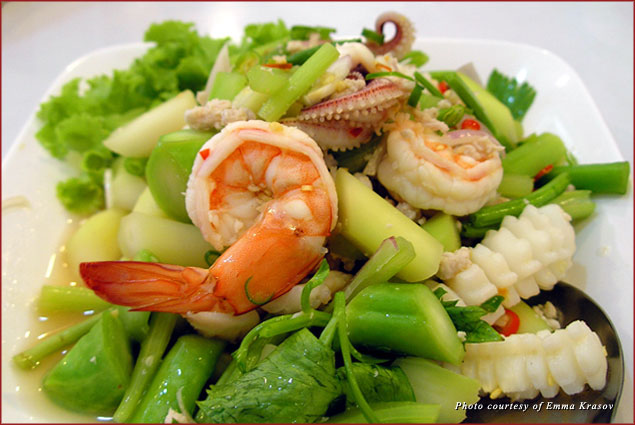 In the morning, we embarked on a Chaophraya River cruise with Grand Pearl Cruise. A relaxing ride along the banks of the River of the Kings, with a buffet lunch and tea service, brought us to the ancient capital of Thailand, the city of Ayutthaya, and to the Bang Pa-In Summer Palace. Combining striking European and Thai architectural features, the palace contains plenty of historical mementos and memorials of the royal dynasty. One of the memorials is dedicated to Queen Sunandakumariratana, who drowned in the stormy river in 1880 on her way to the palace. When her boat capsized, none of her servants dared violate the law and touch the royalty to pull her out of the water. Ayutthaya is also known for its many medieval temples, whose picturesque ruins are now overtaken by flowering weeds, chirping birds, and flitting butterflies. We stopped at one of them, Wat Maha That, calm and majestic, with stairs that lead nowhere and stone Buddhas, broken into fragments. There is a tall banyan tree there, with Buddha’s face carved in its root system. 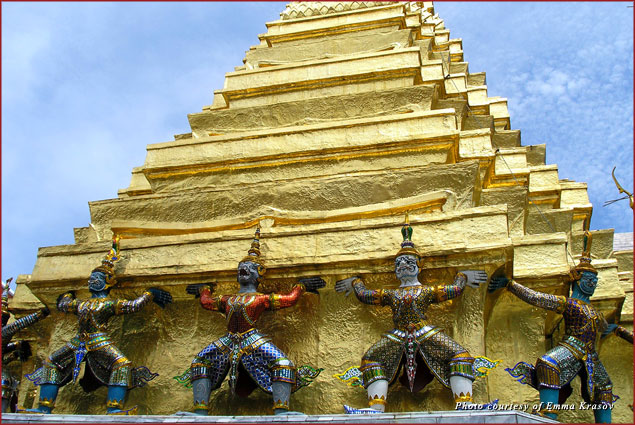 Looking back, I wonder how so many wonderful things, unforgettable sights and enticing events could have taken place in just several days: Excursions to the Bridge over the River Kwai and Hellfire Pass Memorial museum, to Rattanakosin Exhibition Hall, to the Arts of the Kingdom traditional Thai crafts exhibition, and to the Bang Noi floating market. A dreamy oil massage session at the Oasis Spa, where a massage room opened into the open-air shower under the lush tropical greenery. A late-night dinner at Bangkok Marriott Resort and Spa with a live performance of costumed and masked Thai dancers. 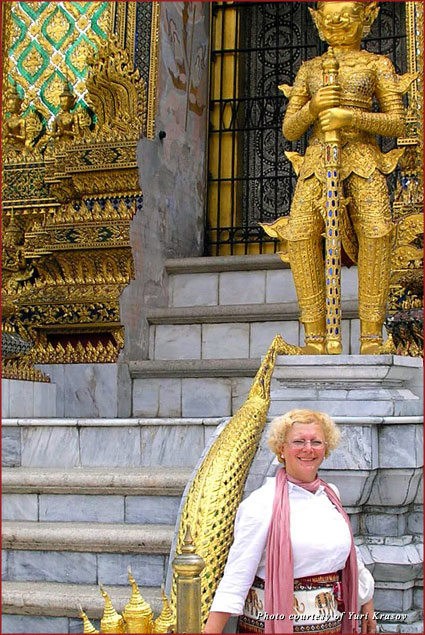 Staying at the most elegant yet comfortable Vie Hotel Bangkok surely helped in keeping up with the hectic schedule. Stylish and beautifully designed, located in the heart of the dynamic metropolis, Vie offered everything a weary traveler could dream of: a spacious room with a view, a freshly-made full breakfast, soothing spa treatments, and modern bars, open into the wee hours. As is always the case in Thailand, the service everywhere was impeccable, all smiles and purple orchids.

You are probably wondering by now why I haven’t mentioned any Thai food. I assure you, darlings, that I’ve tried it all and am ready to report. From upscale restaurants like Supatra River House in Bangkok, to casual Rashnee in Hua Hin, relaxing Venice-Vanich, or simple roadside Koon Pao, there wasn’t one place where the food wouldn’t be simply delicious. Yet even among the equally satisfying establishments, Krua Apsorn became my favorite. Praised in gourmet magazines around the world, and visited by the members of royal family and other celebrities, it serves creative delicacies like a wrap-in salad in Chinese broccoli leaves, tree ear mushrooms, soy sauce preserved eggs, crab omelet, banana leaf-wrapped chicken morsels, and grilled seafood/veggie medley in an addictively-spicy thin sauce. 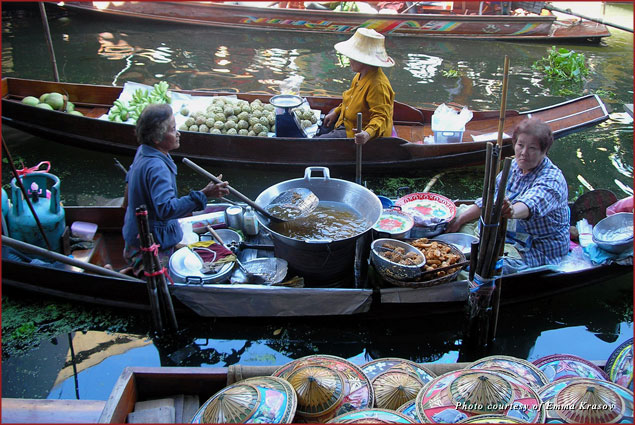 In the street food category (oh yes, I did) the winner was found in Pattaya, a little town by the murky sea, frequented by divers and Viagra-sustained exotica seekers from colder climes. An unassuming open-air café with no name, camped in front of 7-Eleven, served satisfyingly thick spicy soups and silky rice noodles studded with tender cubes of meat, slippery mushrooms, and brightly-colored veggies. And the fruit shakes on the next corner! Made with thin-skinned juicy oranges, ripe yellow mangoes, bananas, watermelon, and papaya – mmm. All food was good in Thailand, no exceptions.

As for other safety concerns, all kinds of destination disasters we hear about in the news make the tourist flow to the country in question thinner and drier. Yet when a stream of visitors runs aground, some amazing treasures of air, hotel, and tour offering more “value for your money” start to shine through. Don’t be shy, pick them up. I would, in a snap. I miss the beauty of the land, the sophistication of the art, and the extreme politeness and friendliness of the people. And did I mention Thai food? Find more information at their website.