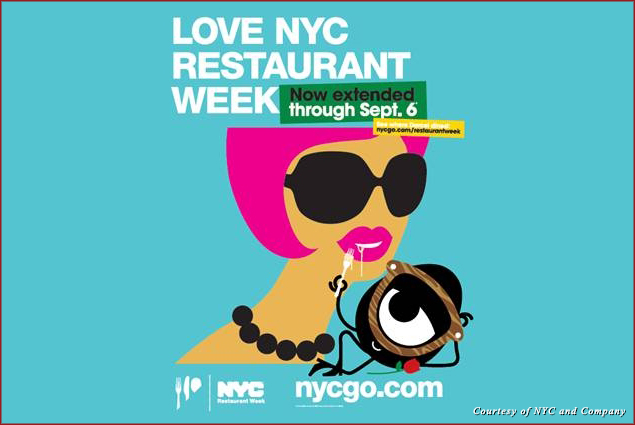 Twice a year an event rolls into town that gets even my jaded New York friends excited: Restaurant Week.

In actuality two weeks of foodie goodness, restaurant week takes place in winter and summer. Participating restaurants create a special menu that includes appetizers, entrees and desserts. For the low price of $24 for lunch, or $35 for dinner, diners can enjoy a three-course meal at the finer dining establishments throughout town. As an extra treat, this year’s restaurant week has been extended through September 6th. For a list of participating restaurants, click here.

The second week has just ended, and what a scrumptious two weeks it was. Over the two weeks, I grabbed the boy and a few friends, and visited four establishments, all for dinner.

Across the street from Lincoln Center, and located in the Empire Hotel, Ed’s Chowder House is modern, warm and not at all pretentious. Arriving just a little earlier than my reservation time gave me an opportunity to check out the happy hour specials at the Chowder Bar, and couldn’t help but make a mental note to go back to enjoy the oyster specials, or a lobster roll.

My meal was lovely, and filling. It started with the cod cakes, with a tomato chili jam, then went to black Atlantic bass with polenta and corn, ending with a mixed berry crumble. Ed’s Chowder House definitely didn’t scrimp on portions, especially when it came to dessert. The berry crumble could have been shared—and in fact I took half of it home. I would highly recommend Ed’s Chowder House, especially for those looking for a pre-theater meal. The first thing the hostess asked is if we were going to the theater (no), and on the way out she was so attentive as to thank us by name, noticed from the reservation. As good as the food is, one would expect the atmosphere to be a bit unapproachable, but that is far from the truth. I will definitely be back.

After Ed’s Chowder House, I went to Delmonico’s, down in the Financial District. Chosen for its place in New York dining history, Delomonico’s is a New York institution established in 1837 proclaiming many firsts on its website. Among those firsts: the first printed menu; first to serve Eggs Benedict; first diner where guests sat at their own tables and the first establishment with tablecloths. Going in I was apprehensive this was one of those New York restaurants that gets by on its place in history as much as its food, and sadly some of those fears were realized. 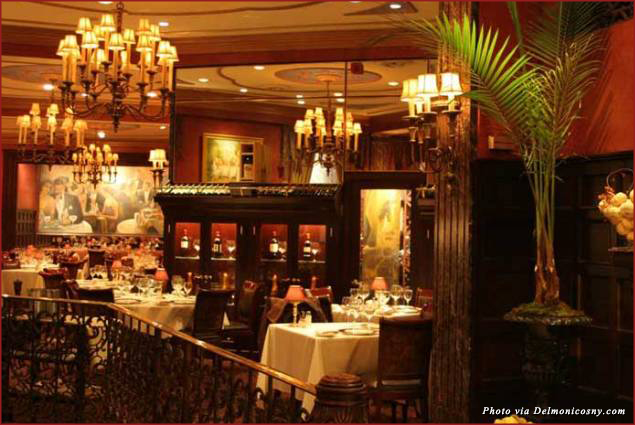 The clubby décor was an obvious reflection of its location near the Masters of the Universe that work on Wall Street. While the appetizers and dessert were good, especially the chocolate mousse dessert, the entrees weren’t much to write home about. Delmonico’s was fun for it being a portal back to a past New York. Maybe next time I’ll take in the atmosphere from the bar.

Next up, I met my college roommate at Fishtail by David Burke. The second seafood restaurant of the week, Fishtail was wonderful, and I have proceeded to recommend it to everyone around me.

Located on the Upper East Side, Fishtail is part of David Burke’s empire, an empire that includes David Burke Townhouse and an outpost at Bloomingdale’s. While our last minute reservations couldn’t be made that day (Reservationist: “Um…we may be able to squeeze you in around 10PM”), my roommie and I decided to try our luck at the bar, as the full menu is served. 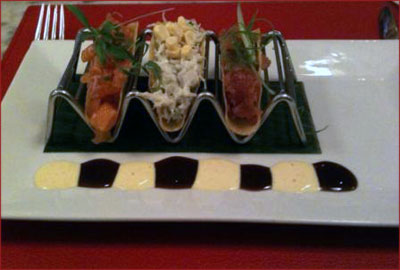 And a great meal was had. The fish taco appetizer was so good the woman sitting next to us ordered the same thing upon seeing our plates and hearing our reactions to our food. Both of our entrees and dessert were just as good. If you find yourself on the Upper East Side Fishtail is a fabulous place to keep in mind. The service is wonderful, and the décor festive—all making for an enjoyable evening.

Finally, rounding out the two weeks of indulgence, I finished my restaurant week with dinner at Dovetail, on the Upper West Side. Open only a few years, Dovetail is just a few blocks from the American Museum of Natural History. Modern and subdued, Dovetail’s décor is simple and clean. The food, equally so. Our potato gnocchi appetizer melted in the mouth. My chicken was good, but the veal shoulder was better. The veal was rich—making the smaller portion the perfect size. Dovetail has the feel of a neighborhood place—albeit a neighborhood place with the highest of quality food and atmosphere—and is a great place to remember if you’re in town and want to get away from the tourist areas of the city.

My adventures in restaurant week have led to a bit of fasting this week, but it was well worth it.