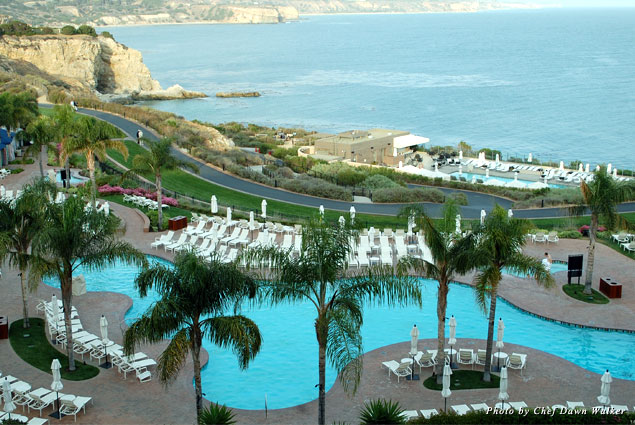 Visit California, the California visitors bureau, recently treated me to a five-day, four-night, whirlwind adventure north to Universal City, west to Long Beach and Palos Verdes, south to Temecula, and east to Palm Springs. This is the first of a series of three articles about my So Fun! Family Tour of Southern California.

My adventures began with a delicious lunch at Parkers’ Lighthouse, located at the tip of Shoreline Village in Long Beach. Established in 1982 as a lighting beacon for ships sailing into Long Beach Harbor and remodeled in 1999 to its current condition, this 500-seat restaurant has three different dining areas: a 250-person, multi-level lunch and dinner house, the 120-seat Queensview Steakhouse on the upper-most level, and a patio, which can seat up to 144 guests. All three dining areas face the harbor, the historic Queen Mary, and Long Beach Convention Center. 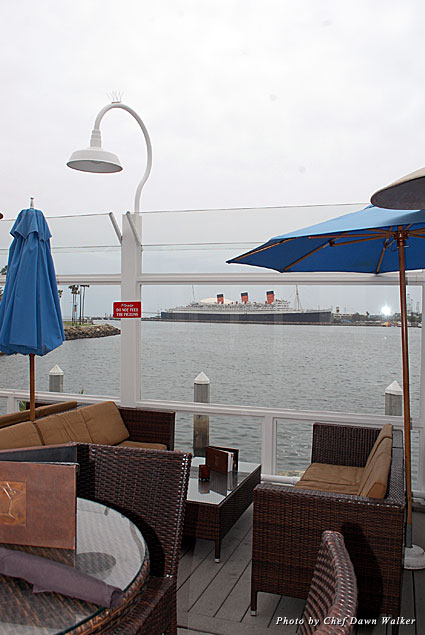 The most delicious and famous appetizer at Parker’s Lighthouse, the garlic cheese bread, tickled our taste buds before my Thai lemongrass coconut bouillabaisse arrived. Served steaming hot, the stew featured white shrimp, New Zealand mussels, octopus, and other chunks of fresh fish in a creamy and tangy broth. Others in my group enjoyed the macadamia nut-crusted tilapia, Cobb salad, sushi, and bento box. I had my eye on the iced seafood tower with lobster tail, Gulf shrimp, king crab, and oysters, but did not want to take advantage of our gracious hosts. Next time… 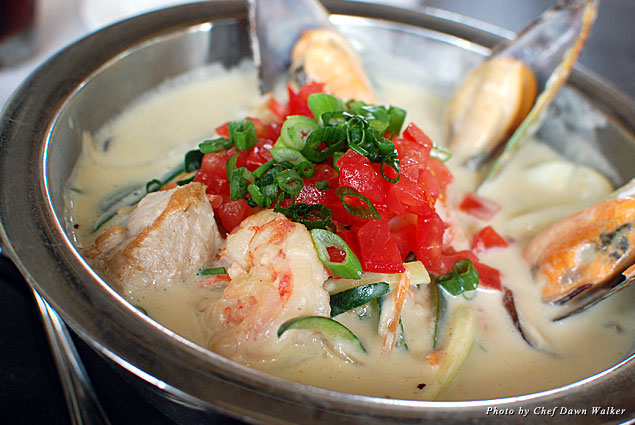 We finished our meal with the Godiva chocolate cake (for two), which the seven of us happily shared having just enjoyed such tasty meals with generous portions. Although I would consider this restaurant fine dining, and the circular two-storied wine cellar was impressive, I would have no issues taking my children here to enjoy the view and the food.

After lunch, we ventured a few blocks to the almost 15-year-old Aquarium of the Pacific. Featuring more than 11,000 animals, the aquarium explores the waters of Southern California, Baja California, and the Northern and Tropical Pacific. We enjoyed the incredible opportunity to meet the aquarium’s newest resident: a male Harbor seal pup, the second baby of Shelby. The pup was born on May 1 and is anxiously awaiting a name; for a small donation, the public can submit name suggestions.

For $3, visitors can also purchase a cupful of nectar to feed the birds in the Lorikeet Forest. The birds fly freely in this enclosed aviary and land on guests’ hands and arms (and sometimes heads) to take a drink of the sweet nectar. We also explored the Shark Lagoon at feeding time, June Keyes Penguin Habitat, the BP Sea Otter Habitat, the Ray Touch Pool, and the jelly, seahorse, and sea dragon exhibits. The new, 5,000-square-foot Pacific Collection gift store completed a remodel and now features a glass façade with a large-scale underwater image of a kelp forest off the coast of California’s Channel Islands, which allows light to stream through the windows and appear like an aquarium. The Aquarium of the Pacific is a great half- to full-day, affordable venue with exhibits, shows, and activities appropriate and interesting to adults and kids alike. 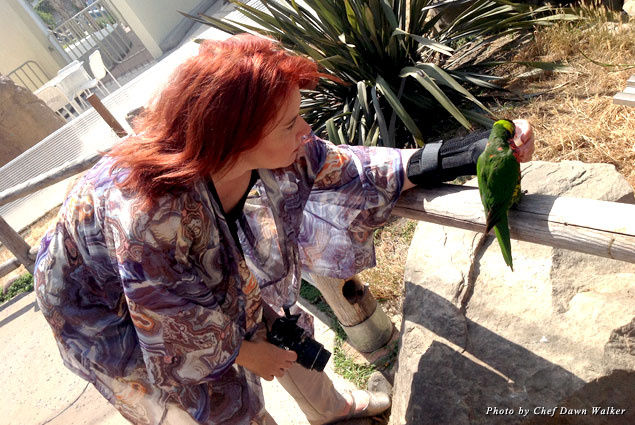 Centrally located between Los Angeles and Orange County, Long Beach boasts the ambience of a sophisticated urban center and the charm of an oceanside community. Long Beach’s downtown waterfront sets a new standard for “walk-ability” with first-class accommodations, shopping, dining, and seaside sightseeing, just steps from one another.

Do you remember Marineland of the Pacific? For a Southern California native such as myself who grew up in the 1970s and ’80s, Marineland (1954 –1987), which was located on the Palos Verdes Peninsula, ranked right up there with Disneyland (opened in 1955), Knott’s Berry Farm, and the La Brea Tar Pits. I had half forgotten about this marine wonderland until our Palos Verdes tour began and our guide, Ron, explained the history of luxurious Terranea Resort. Nestled on the coast between Redondo Beach and San Pedro, this Mediterranean-style resort, frankly, knocked my socks off!

It all began when I checked in and was offered either a chilled bottle of water or a glass of sparkling wine. You do not have to tell me when I have reached travel writer nirvana.

The resort itself sits on 102 acres of prime coastal land and features eight dining venues, a full spa and fitness center including a Pilates studio, an award-winning golf course, three stunning pools, 135,000 square feet of meeting space, ecological enrichment programs, boutique shops, and a coffee house. All the guest rooms have private balconies, and most have ocean views. For guests who need more space and/or privacy, Terranea offers suites from 450 to 1,800 square feet, two bedroom bungalows, and three bedroom casitas and villas between 1,850 and 2,800 square feet. Not only was the bed in my guestroom super comfy, the room had a multimedia center, a flat-screen television, an iPod dock, a huge stone bath with separate tub, and shower and toilet spaces. 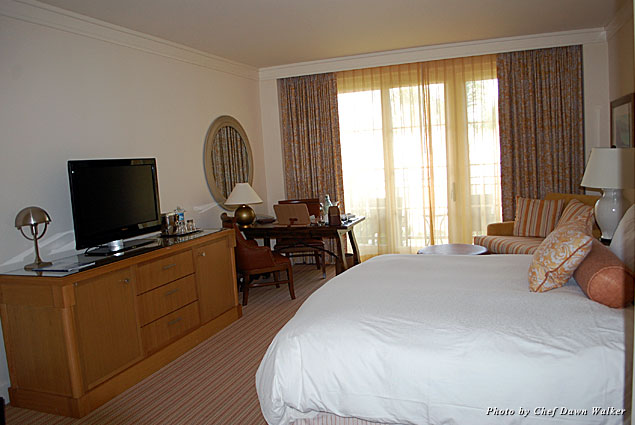 Perhaps my favorite part of our tour of Terranea was meeting the “director of all things fun” (yes, that is her real title), Marissa Edwards. The kid’s club program at Terranea is whole-child focused and often directed by the kids themselves. The staff members come from child development backgrounds, and most have been with the resort for several years. The faculty caters to kids with food allergies (they are peanut-free and sensitive to the other major allergens) and aversions. Famous for its Easter Bunny and Elf “tuck-ins”, the program changes with the seasons and also ensures long-term visitors do not get bored. Itineraries might include tours of the kitchens or “guts” of the resort, water sports, falconry, or movie nights. I enjoyed listening to Marissa; her passion for kids and for making sure the younger guests have an exceptional experience at Terranea came across.

Terranea also caters to business travelers and couples in addition to families. The resort offers high-end luxury worthy of any of the top-rated resorts in Southern California.

Our next excursion took us to the California Science Center, which means we got to see the space shuttle Endeavour! This admission-free venue offers permanent and changing exhibits and related educational programming through several galleries spanning more than 400,000 square feet. World of Life, Creative World, SKETCH Foundation Air and Space Gallery, the IMAX theatre, and the Ecosystems exhibit dominate the majority of the real estate in the museum, however, the new addition to the California Science Center family is the Endeavour, NASA’s fifth and final space-worthy shuttle, which first flew in May 1992 and took its last flight in May 2011. The Endeavour was the first space shuttle to take an African American woman in space. 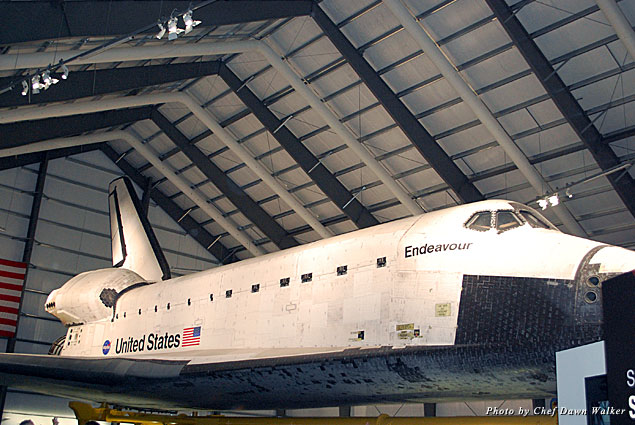 I felt as excited as a child as I stood beside the space-traveling beauty, imagining the miles it flew, astronauts it carried, and business it conducted at the International Space Station. The science center is a must-see when visiting Southern California. Due to the ever-changing traveling exhibits, it is a venue that can be visited over and over again. Seeing the Endeavour was another highlight of my trip.

Our final destination on this leg of the trip was to Universal Studios Hollywood. I have to confess, I trained to be a tour guide here and worked in the retail stores when I was in high school … a long time ago. This theme park has changed since the 1980s! The world-renowned, behind-the-scenes tour at the self-proclaimed “entertainment capital of California” offers guests a unique opportunity to embark on an even closer journey to Hollywood magic. With guidance from knowledgeable studio tour guides (which I tried to do but never became) and lively video narration from comedian Jimmy Fallon, guests navigate the 415-acre movie studio complex of soundstages, facades, working sets, and special effects attractions. Much of the studio back lots were rebuilt after a 2008 fire.

Transformers: The Ride-3D, King Kong 360 3-D, The Simpsons Ride, Revenge of the Mummy – The Ride, Jurassic Park – The Ride, Shrek- 4-D, Adventures of Curious George play zone, Terminator 2: 3D, Universal’s animal actors, special effect stages, The Fast and the Furious Extreme Close-Up, and Flash Flood are just a few shows and rides in store for guests who visit the park. The seaplane that swoops in directly above the mist-shrouded netherworld amazed the audience (and me) in Water World – A Live Sea War Spectacular Show, which put studio guests in the middle of exciting action that involved hundreds of human stunts and fiery special effects. NBC Universal plans to begin construction of the Wizarding World of Harry Potter where the Gibson Theatre and Curious George water play areas are currently located. 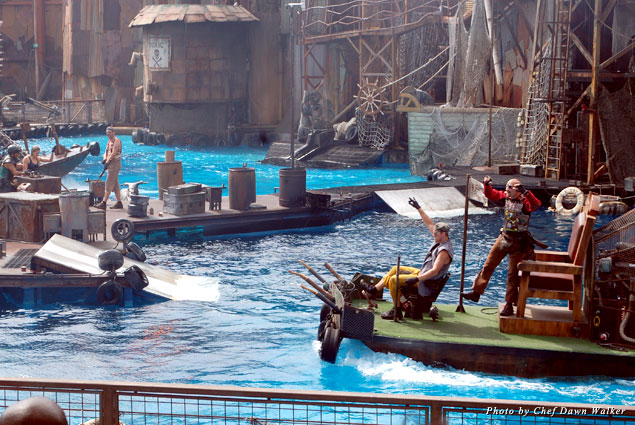 Ticket prices for Universal Studios Hollywood range from $72 for those less than 48 inches tall and $80 for taller folks. For Southern California residents the ticket price is now $65 with a valid ID, and a season pass is $80. The front of the line pass is $149, and the VIP experience is $299.

Los Angeles and the surrounding areas are a playground for young and old. From the free to the expensive, travelers—and natives—can enjoy culture at museums, galleries, and theatres and thrills at theme parks and on land and in the water. Plus, visitors can dine on fine and fabulous cuisine, relax at resorts, learn about the world and the environment at aquariums, and shop while enjoying the wonderful weather Southern California offers year-round.

Stay tuned for my next article about family fun in Temecula!

Go “Behind the Insider’s Lens” to view footage from Chef Dawn’s trip to Los Angeles and Long Beach, as well as her visits to Temecula and Palm Springs: