A Sneak Peek at the Kardashian’s DASH NYC 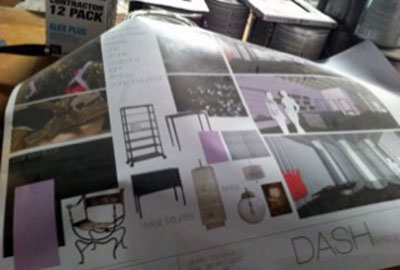 Hey Jetsetters! As some of you may know, my other life is as the founder of Vanity Girl Hollywood. And we’re so excited that our vanities will be going into the Kardashian’s soon-to-launch DASH NYC store. I’m in SoHo now and will be sharing some of my favorite finds in the city with you. In the meantime, here’s a look at my sneak peek of DASH NYC:

DASH NYC designer Gregory Okshteyn, President of Studios GO, Inc., took me on a behind-the-scenes walk-through of the space and shared the vision that was unfolding right before me. Guys with hammers, drills, etc., were hard at work making sure it all comes together. Sexy, SoHo, Boudoir and Dynamic were a few of the words that Greg used, and although it is still a little raw I could totally see that. He explained that the dressings are going to be lush and how the mannequins will be sparkly and eye-catching in the storefront. Even the clothing racks will be artistically lit, and finally, he is going to use visual effects to keep the space exciting and dynamic.

And the pièce de résistance? He walked me to the back of the store, up a few stairs, to the intimate area that will become the VIP makeup area featuring our Black Broadway Desks. EXCITING. It’s all going to look so beautiful. 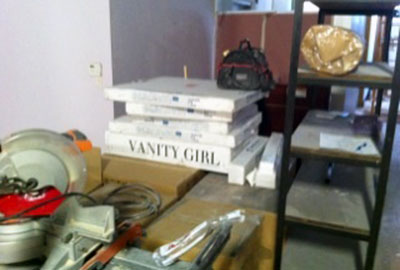 When I asked Greg what inspired him, he simply replied, “The Kardashians.”

It’s in a great part of SoHo (not that I think there isn’t a great part of SoHo). And shopping-wise it’s close to everything a girl would want like major retailers—a MAC Cosmetics a couple of doors down— high-end boutiques, and more. So whether you’re a native New Yorker or a visiting Vanity Girl, make sure to drop by DASH NYC at 119 Spring Street in SoHo. We don’t have the usual old showroom. We prefer to show off our vanities in action and we are beyond proud that this is our New York working atelier and will be featured alongside the amazing lines handpicked by Kim, Khloe and Kourt.

Read about it: Kim’s Blog, US Magazine, Examiner.