A Golf Getaway in Pattaya, Thailand 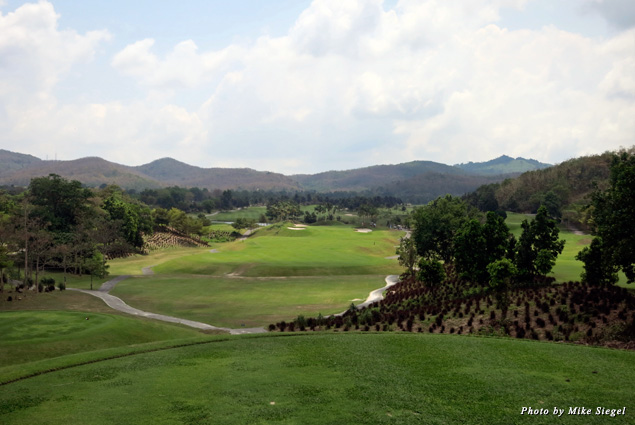 I never need an excuse to go to Thailand, but when I received a text message from the good folks at Jetset Extra asking if I was interested in playing golf in Thailand, well, there are some things to which I don’t say no.  The trip took place in March, one year after the Tourism Authority of Thailand (TAT) welcomed me and other journalists from around the world to Bangkok and Ayuttaya for training at a sword-fighting school and Muay Thai boxing camp. This year’s trip, again chaperoned by my TAT guide Suriya, was indeed a lot less physical.

The big occasion for this media trip was the TAT Chairman’s Cup golf tournament, held at Rayong Green Valley Country Club, which is part of the Green Valley Group that also includes two other courses: St. Andrews 2000 Golf Club and Silky Oak Country Club. Interestingly, all three clubs share a single clubhouse in Rayong, just a quick 20- minute drive outside the bustling tourist beach town of Pattaya. During my short week in the region, I managed to not only play Rayong Green Valley, but also St. Andrews 2000 and the stunning Laem Chabang International Country Club, which is just 30 minutes north of Pattaya. The city of approximately half a million is located about a two-and-a-half-hour drive southeast of Bangkok. It’s proximity to the Thai capital and the Bangkok airport—along with being a cruise ship port—makes Pattaya a hub of not only international tourists, but also of Bangkok residents escaping for the weekend.

Where tourists and weekenders go, golf courses tend to follow. Eastern Thailand is no exception, boasting no less than 35 courses in the region, most centered around Pattaya and its outlying areas. I had no idea what to expect from a Thailand golf experience, but I walked away thoroughly impressed. Truth be told, my golf game is average at best, and I certainly was no threat to those hoping to win the tournament. But I have played my fair share of golf courses around America, and it’s safe to say golf in the United States is hurting right now. A perfect storm of setbacks has contributed to thousands of golf courses closing across the country over the past eight years; the recession, lack of interest from younger generations, drought conditions, even the decline of Tiger Woods’ career have all at some point been blamed for golf’s fading popularity. But in Asia, golf is growing, and with new-moneyed Chinese taking up the game, the sky’s the limit as to where the Asian golf industry is headed.

Here are seven reasons why Pattaya, Thailand, should be your next golf getaway:

Like Florida, the wet, humid weather in Thailand makes for lush, green courses. As someone who lives in drought-stricken California, the green foliage was a welcome change from sunbaked desert courses. There were no bare patches on greens and fairways, and the landscaping was beautiful. It is worth noting I was also visiting during the end of Thailand’s dry season, so if they were this green in March, imagine the dense fauna come September—umbrellas required, for sure.

They might be my favorite feature of all. Most of the golf courses provide caddies for an extra fee of around 400 baht (approx. $12 US). Standard tip is another $10 to $12 after the round. The caddies do everything a common caddy does (keep score, give yardage, rake traps, repair divots, etc.), but they do not carry the bag. Instead, they will either pull it by hand cart if you’re walking or drive the golf cart if one is rented (cart fees can run anywhere from $15 to $25 depending on the course. All pricing is a la carte.) Oh, and did I mention all the caddies are beautiful, friendly women in adorable matching outfits? They’re awesome. 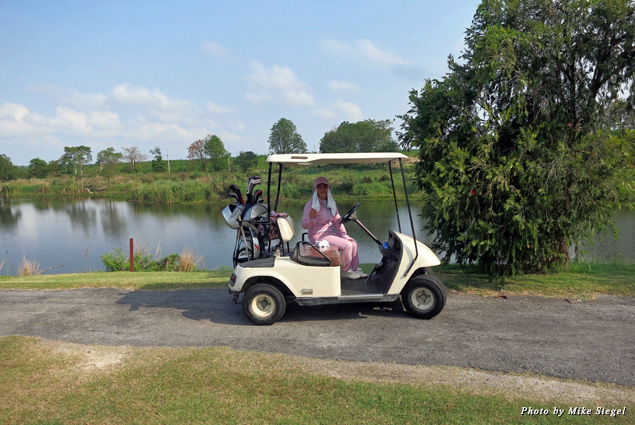 It is common fact that golf can put a hurting on the wallet, and like most things, you get what you pay for. While St. Andrews 2000 and Rayong Green Valley were both fine courses, the Jack Nicklaus-designed links at Laem Chabang (there are three 9-hole courses) really blew me away by their beauty and challenging layout. Laem Chabang and the nearby Siam Country Club are known by many locals as the two top clubs in the area. In fact, Siam had just hosted an LPGA tournament two weeks before my visit. I played Laem Chabang, where fees for 18 holes are 3,000 baht ($92 US) during the week and 3,500 baht, or around $107, on the weekends. Add the cart, caddy, and tip, and I was out the door on a busy Saturday for just less than $140. That may seem like a lot to most people, but a world-class course like that, without the caddy, could approach $200 or more in California on a weekend. All that and I got a fantastic Thai buffet in the clubhouse afterward for less than $10. Good luck with that in the US! 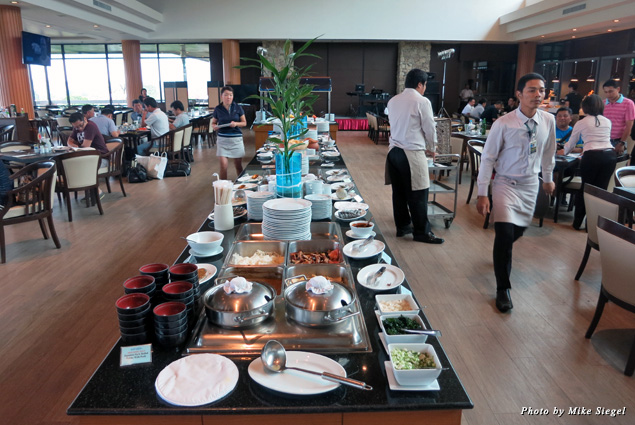 4. The Distance to Bangkok

Bangkok International Airport is a major hub in Asia, with direct flights to North and South America, Europe, and beyond. Top Thai tourist destinations such as Phuket, Ko Samui, and Chiang Mai all require either an additional flight or a lengthy train ride to reach. Pattaya’s proximity to the airport and capital is a major plus.

As we all know, the Land of Smiles has a reputation beyond golf, beaches, and stellar food. Like any tourist hub in Thailand, Pattaya is a bustling center of sex tourism. At night, downtown Pattaya comes alive with all forms of temptation: go-go bars, discos, drag shows, massage parlors, streetwalkers—you name it, you can find it. Head down to notorious Walking Street, which has more go-go bars in a three-block radius than just about anywhere in the world. My guide took me to the famous Tiffany’s theater on my final night, which is the biggest drag show in town. Not my first choice for entertainment, but the performers were talented and the costumes were the most elaborate I’ve seen since Mardi Gras. The performers will pose for photos with guests after the show, but only for tips. You’ve been warned.

Maybe you’d like to take a break from the golf course for a day? Well, Pattaya has plenty of activities for every age level. On my day off, we visited an interesting temple called the Sanctuary of Truth. Back in 1981, a wealthy local businessman commissioned hundreds of workers to construct an all-wooden temple in the varying Asian styles as a monument to unity. The work continues to this day, and the scale (2,115 square meters and 100 meters high) and intricacy of the carvings are quite impressive. An hour or so is plenty of time for the temple, and may be best done in the morning before the midday heat sends thoughts toward the beach. 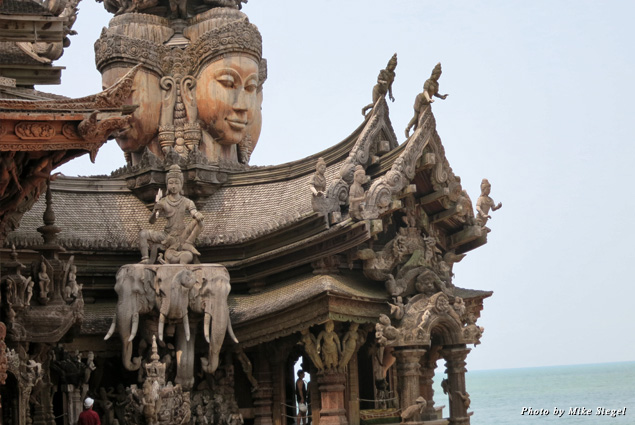 Speaking of the beach, sand and water cleanliness can vary. Do some homework and inquire about which beaches in the area are best for swimming. We had a lovely beach lunch at a bar/restaurant aptly named The View in south Pattaya, away from the bustling downtown strip. We enjoyed excellent seafood while watching kite- and wind-surfers scoot across the choppy waters. We also made stops at Nong Nooch Tropical Botanical Garden for Thailand’s annual Elephant Day celebration, and The Pattaya Floating Market (which felt like a tourist trap seemingly designed for busloads of Chinese tourists to buy cheap souvenirs—again, you’ve been warned). Pattaya also boasts a Teddy Bear Museum, a go-kart track, a tiger zoo, a Ripley’s museum, and several water parks, including the world’s first Cartoon Network-themed water park, Amazone.

There are accommodations for all budgets in Pattaya. I was lucky enough to stay at the 4-star Dusit Thani Hotel at the north end of the beach road. There are also hostels, guesthouses, large all-inclusive resorts, spa retreats, and even a Hard Rock Hotel and Resort across from the main beach. Some golf courses, Laem Chabang among them, also offer hotel rooms and apartment rentals. 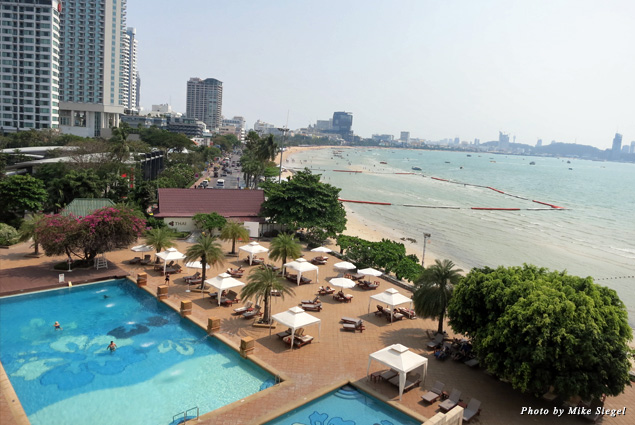 Other locales in Thailand may offer better than Pattaya when it comes to tranquility, beaches, history, etc., but if golf is your thing, you could hardly do worse than spending some time in the region. As golf continues to grow in popularity in Asia while losing ground in the US, maybe struggling golf courses in America could learn a thing or two from Thailand. May I suggest female caddies?