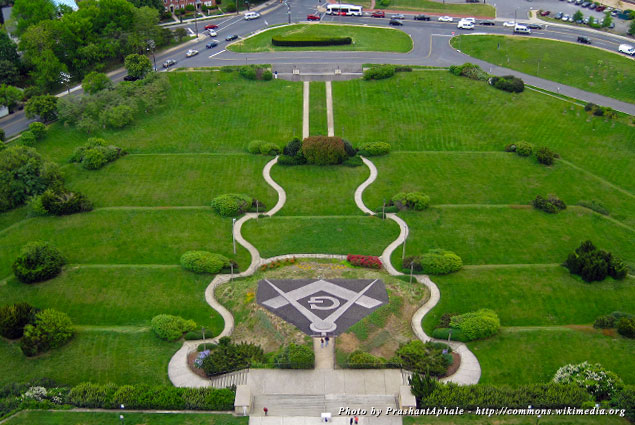 The design of the building is said to mimic the lighthouse at the other Alexandria, the Egyptian city where that wonder of the ancient world once stood. On the expansive grounds, you can clearly see the symbol of the Freemasons carved into the lawn.

Proceeding up the wide stone steps into the lobby, it is clear you are entering a museum, with the requisite bronze statue of a great man gazing over the lobby. However, a closer look shows Washington is wearing a symbol of Freemason dress—the apron he wore to lay the cornerstone of the capital—a truly iconic example of a spiritual mason doing the physical mason’s work. On the walls, classical portraits depict famous Freemasons. The lobby features a small bookstore with Freemasonry memorabilia and a good book collection of interest to both Washington enthusiasts and those whose tendencies lean toward the esoteric. “Solomon’s Builders: Freemasons, Founding Fathers and the Secrets of Washington D.C.,” for example, talks about the hidden symbolism that appears throughout Washington, DC’s many original buildings, most of which can be viewed on a DC tour.

Behind the bookstore’s glass memorabilia case, a high-level Freemason and retired docent rings up our purchases. He is full of useful information about the building and encourages us to take the inexpensive guided tour. Unfortunately, while we were happy to see the tour was led by a young woman (the Freemasons have kept women successfully out of the ranks until recently) she was neither a Freemason nor a Washington expert but rather a graduate student studying to become a museum curator so her knowledge was limited to the information she had memorized for the tour. No matter, it was well worth the experience, as you get to see material otherwise not available to museum guests. 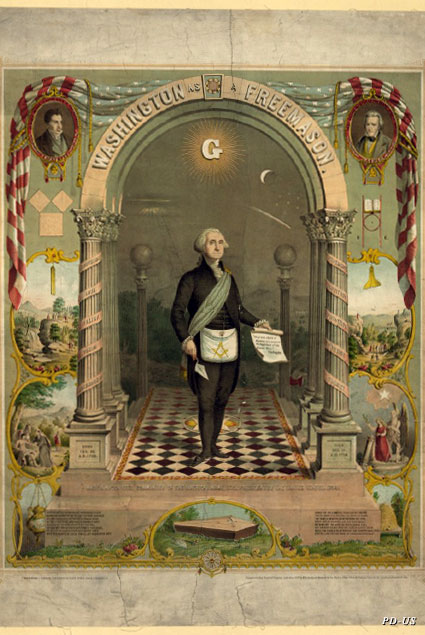 The bottom floor of the museum is a room filled with colonial furniture, a replica of one of the first Freemason meeting spaces, and it includes a chair in which Washington actually sat. Upstairs, a large collection of George Washington’s personal memorabilia features Freemason pieces he owned and a visual biography of the man’s life. I was particularly struck by letters of diplomacy sent out to various groups: when writing to a minister, Washington referred to God; when corresponding with a Native American chief, Washington talked in the same manner of the Great Spirit. This was a beautiful distinction, which showed not only the man’s personal ability as a diplomat, but his deeper Freemason understanding of the spirit behind all things. It was a tremendous insight to see these letters side by side.

On the top floors, Freemason regalia—including formal wear—and historical materials were collected, including information about a sister order to the Freemasons, which was created entirely from a romantic novel of the early 20th century. Upon request, we were also shown a separate floor with memorabilia from the Knights of the Templar, including stunning stained-glass windows, which depicted the order.

Our final stop was to the observatory on the top floor, which features exterior walkways showing us a 360-degree view of the Potomac River, Washington, and Alexandria. Looking across at the majestic buildings of the nation’s capital, it seemed Washington would have been proud of his legacy—the tall buildings reaching for higher purpose, as Washington himself had done.

Join a high-level Freemason in Washington, DC to explore the George Washington Masonic Memorial and many other buildings full of hidden symbolism on an Esoteric America DC tour this September.