Your Guide to Edmonton During the Women’s World Cup 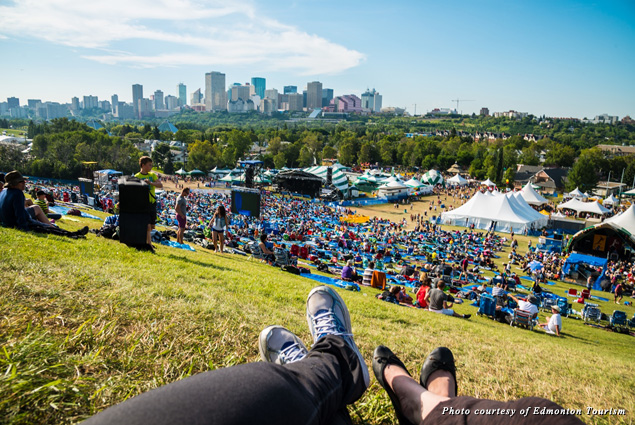 If your favorite team is playing in Edmonton in the FIFA Women’s World Cup, then you’re in luck! Summer is one of the most exciting times to visit Edmonton, with long sunny days (up to 17 hours of daylight in June) to fill with activity. National Geographic named Edmonton one of the best summer trips in the world for 2015, and it’s easy to see why. Aside from the FIFA-related events and menu items across the city, some of the most popular summer festivals and events are happening at the same time FIFA is in town. Check out these local hotspots and special events while you’re here for the big match:

Come enjoy the funky, bohemian spirit of Old Strathcona where historic buildings blend with youthful exuberance, making it one of Edmonton’s trendiest areas. The city’s celebrated arts and cultural community makes its home here, as does a plethora of unique local boutiques, music shops, trendy restaurants, cafés, pubs, and nightclubs. For shopping fanatics, check out Gravitypope and Bamboo Ballroom, and spend the afternoon at Block 1912 where you can sip on a coffee while you observe the bustling streets of Old Strathcona. If you like fresh produce and local goods, then make time in your schedule to visit the Old Strathcona Farmers Market, which hosts more than 130 vendors and is open every Saturday. And for the evening, stop by one of Edmonton’s local restaurants (we recommend MEAT or El Cortez) before heading out to The Pint, The Next Act, or Blues on Whyte for a nightcap. 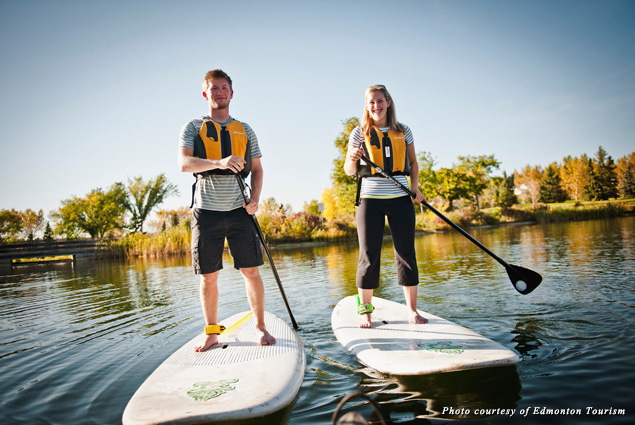 Edmonton is the largest urban parkland in North America with a river valley system that’s 22 times the size of New York City’s Central Park. Jog, cycle, or stroll through more than 150 kilometers of trails or paddle your way through the North Saskatchewan River by canoe or kayak. For a unique experience, enjoy the fresh air and stunning views on a Segway trekking tour where your guide will share some of Edmonton’s history and provide tips and tricks as you embark on your journey. For a fun day’s outing, visit some of Edmonton’s attractions in the river valley including Fort Edmonton Park, the Edmonton Valley Zoo, the Muttart Conservatory, or the Janzen Nature Centre. There are also several public golf courses that use the banks of the river valley as a scenic backdrop. 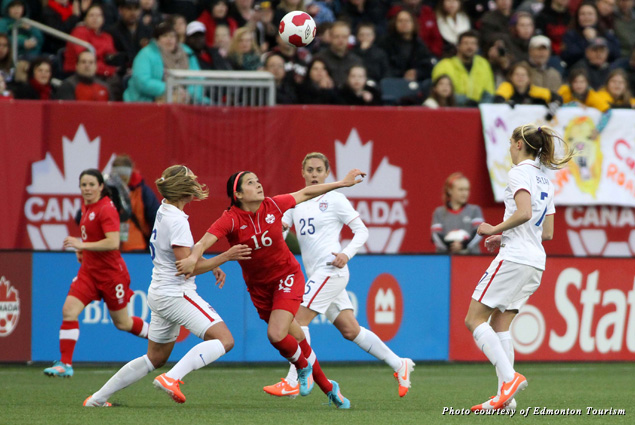 If FIFA isn’t enough live action for you, then Edmonton has no shortage of sporting events to add to your schedule. For more soccer, take in a FC Edmonton game. The Edmonton Prospects play baseball in the heart of the river valley, with downtown’s skyline as your backdrop. If you stay past FIFA, you can head back to Commonwealth Stadium to watch the Edmonton Eskimos defend their home turf (football). Or come back later in the summer to catch the 2015 Canadian Track and Field Championships, FIBA Americas Championship for Women (basketball), the ITU World Triathlon, or the Tour of Alberta (pro cycling).

In the middle of downtown is a hidden gem called Rice Howard Way, where Tres Carnales, Craft Beer Market, and other must-see restaurants and pubs reside. Tres Carnales really stands out in the Edmonton dining scene for its laidback atmosphere and downright delicious Mexican food. You’ll make friends with the owners and want to come back for more. If you’re looking to raise a glass after a FIFA match, then Craft Beer Market is your kind of place. They have an eye-popping 104 different kinds of beer on tap from around the world and in their own backyard. You can also sit down with your best mates at Sherlock Holmes for some fish and chips and an English pub experience. 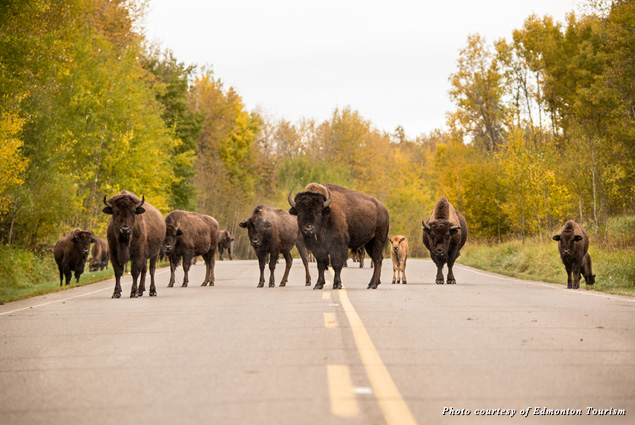 One of 43 national parks in the country, Elk Island National Park is just a hop, skip, and a jump from Edmonton. Wildlife lovers, watchers, and photographers take note: Elk Island is home to free-roaming Plains bison, moose, deer, elk, and more than 250 species of birds. Come out for a day filled with hiking, cross country skiing, or snowshoeing, and stay into the evening for a glimpse of beautiful starry skies. The park falls within the Beaver Hills Dark Sky Preserve, which means optimal conditions for viewing sparkling star clusters, galaxies, and even the bright chorus of lights we know as aurora borealis (or northern lights).

While you’re in town, check out some of the exciting summer festivals taking place around the city. Watch as downtown Edmonton is transformed into a masterpiece at the Works Art & Design Festival, with more than 260 impromptu exhibits and galleries. If you’re a music lover, head to the Edmonton International Jazz Festival and the 2015 Summer Solstice Music Festival to enjoy the sounds of jazz and the symphony. Learn from the pros at the Freewill Shakespeare Festival and watch open-air productions of William Shakespeare in Hawrelak Park. Or try your hand at barbequing at Porkapalooza in Borden Park. Planning on coming back to Edmonton? Don’t miss North America’s largest and oldest International Fringe Theatre Festival from August 13–23, or travel around the world in a single weekend at the Servus Heritage Festival from August 1–3. 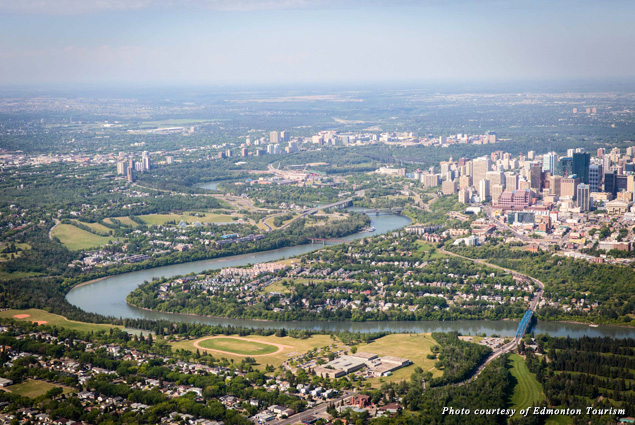 A mecca for art lovers, Edmonton’s Arts District has a wide variety of visual displays, theatrical performances, and creative entertainment. The Art Gallery of Alberta is itself a masterpiece of architecture with plenty of unique international traveling exhibits and late night art parties. A hive of live theater, the Citadel Theatre is Edmonton’s multi-stage entertainment hub where the city’s finest actors and comedians strut their stuff. From Bach to Wagner, Baroque to folk, and Broadway to cabaret, the Francis Winspear Centre for Music is home to one of the highest regarded orchestras in the world, the Edmonton Symphony Orchestra. 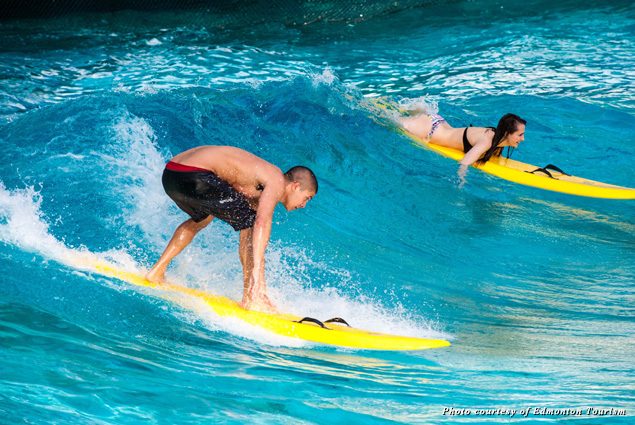 If you’re an adrenaline junkie, Edmonton has a plethora of activities that will be right up your alley. For the ultimate tour of the city, fly over Edmonton in a helicopter with a guide pointing out everything interesting. Strap on your helmet, feel your heart pounding, and hear the electrifying sound of the engine as you grip the wheel of your ProKart at Speeders. Each race at the Speeders indoor facility is 14 laps and your ProKart can reach speeds up to 70 kilometers per hour. For a fun group activity, gather some friends and head to the Edmonton Paintball Centre for a thrilling paint battle at the largest indoor facility in all of Alberta. For a different type of rush, make your way to Breakout for a whirlwind of suspense, mystery, and teamwork. In this live-action escape game you’re locked in a room where you must solve a series of puzzles, clues, and riddles to escape before the 45 minutes expire!

Have you ever surfed the prairies before? Well if not, grab your swim trunks or bikini and get ready to hang 10 all day long at the World Waterpark. If surfing isn’t for you, you can zip line, rip down the 17-plus waterslides, or simply splash around in the World Waterpark’s wave pool. And if you’re in the mood for shopping, grab your sneakers and hit the more than 800 retailers and boutiques spanning the equivalent of 48 city blocks. Still not enough? Check out the casino, the Ice Palace (an indoor NHL-sized skating rink), movie theatre, Galaxyland Amusement Park, and mini golf course, or catch penguins frolicking at Sea Life Caverns. 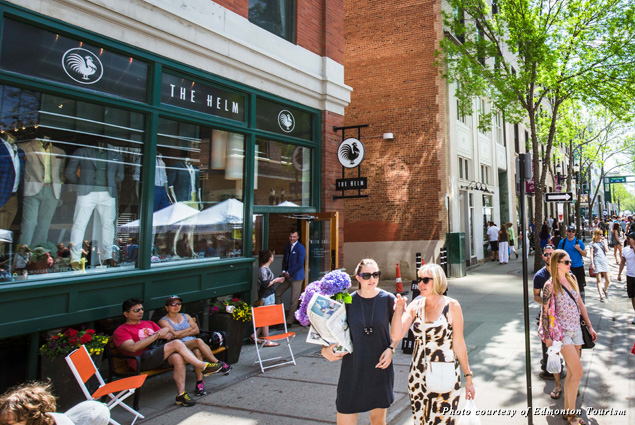 Stop by the sophisticated neighborhood of 104th Street in the heart of Edmonton for an urban experience filled with arts, fine food, and unique local boutiques. Once you arrive in this historical warehouse district, you’ll want to stay and enjoy some quality time. Grab a coffee from Credo and spend some time sampling flavor-infused olive oil and vinegar pairings from Evoolution. Weave in and out of high-end clothing stores including The Helm, Workhall, and High Grade Denim Gallery. After you’ve worked up an appetite from shopping and sightseeing, live a foodie’s dream at Corso 32 and Rostizado or design your own epic burger at The Burg.