Whip It With the DC Rollergirls! 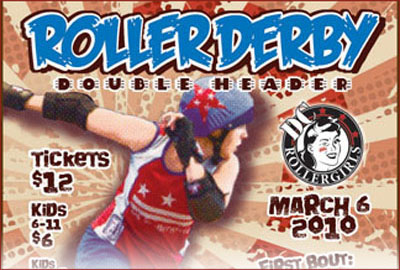 This weekend it was a US vs. Canada rematch! This time it wasn’t in hockey, it was in roller derby. The DC All-Stars went up against the New Skids on the Block who came all the way from Montreal.

This was my first roller derby experience, so I didn’t quite know what to expect. The game is confusing at first, but once you get into it, it’s fun. But don’t let Drew Barrymore fool you, in DC, it’s not really too much of a contact sport. I’m told that in other places, like Seattle and San Francisco, it’s a bit more intense.

But that doesn’t mean it wasn’t a blast to watch and it doesn’t mean it was pretty. The players still have wacky nicknames like Guantanamo Babe and Condoleeza Slice. But the DC girls were outmatched by their sisters from the north. It was kind of a blow-out.

The second match in the double-header was a little more even as the Cherry Blossom Bombshells took on the DemonCats.

It’s definitely worth checking out if you’re in DC. The All-Stars have a few more home games in the spring. (They play at the DC Armory off the orange and blue lines.) But the DC Home Championship Bout is on April 10th.