Visiting the Winemakers of Languedoc in the South of France 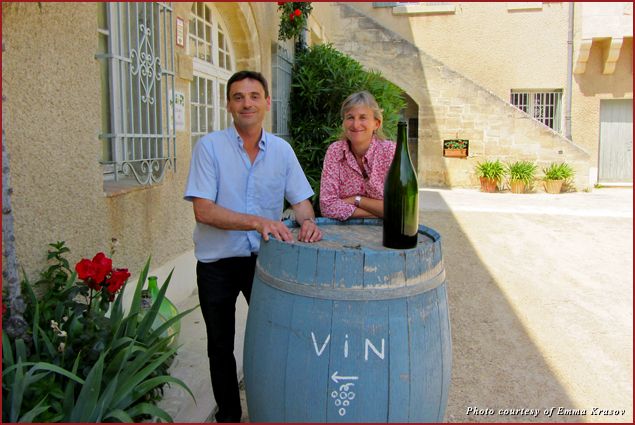 Languedoc is a wine-producing Mediterranean region where the vines were thriving even before the arrival of humans. It is located in the very south of France. Air France takes passengers here from San Francisco with only one stop at Charles de Gaulle. Then it’s just a short flight to Montpellier, the central city of the region.

In Languedoc, the sun shines 300 days a year. The complex mineral-rich soil is perfect for Carignan, Cinsault, Grenache, Roussanne, Marsanne, Viognier, Vermentino, Syrah, Mourvedre, and other old and newly introduced grapes. The region is known for a vast variety of wines produced within the Appellation d’Origine Controlée (AOC) Coteaux du Languedoc.

On a summer trip to Sud de France, which took me slightly off the beaten path, I discovered a world of ancient culture, benevolent nature, and amazing modern developments in the land of vines and olives where local winemakers cherish traditions steeped in history.

On the wall of Chateau Mourgues du Gres, as well as on its wine label, there is a Latin saying, “Sine Sole Nihil,” which means “nothing without the sun.” Not just sunshine, but the waters of Rhône River, southern breeze and northern mistral, as well as rocky soil filled with prehistoric pebbles that create wonderful conditions for aromatic and flavorful wines whose color scheme reflects the one of the white, golden, pink, and ruddy stones scattered on the ground. 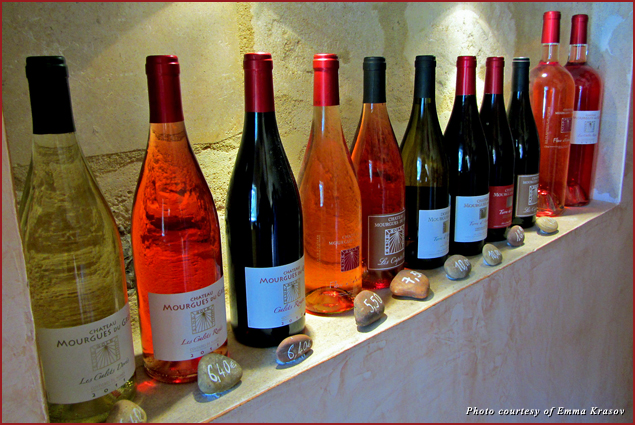 At Chateau Mourgues du Gres I tried not only Les Galets (“pebbles”) wines – crisp white, exuberant rosé, and dark full-bodied red with soft tannins – but some other local delicacies, like picholine olives, almonds, and goat’s milk cheese – Pélardon – that has been made here since Roman times. Ancient Romans were the first to produce wine from the Gallic grapes.

Mas de Tourelles winery in Beaucaire, owned and operated by the Durand family, is located at the archeological site of a Gallo-Roman villa whose dwellers were presumably engaged in some winemaking in the 1st century CE. Inspired by the historical connotations, Diane and Herve Durand, and their son Guilhem started a wine-producing enterprise following the detailed descriptions of the Roman winemaking process found in the writing of Pliny The Elder, Lucius Columella, and Palladius. 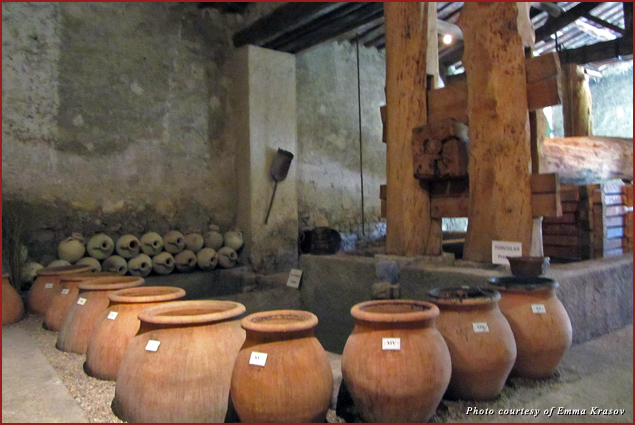 While visiting Mas des Tourelles, we stepped into the replica of a Roman cellar in the 17th-century stone farmhouse on the property. Inside the dark high-ceilinged room, cool even on the hottest day, there was a giant wine press and amphorae – the wine bottles of antiquity.

At harvest time, Mas des Tourelles employees, dressed in rough tunics, reenact all the steps of the Roman slaves producing wine – from harvesting and barefoot crushing of the grapes to introducing various additives during fermentation.

While the ancient winemakers didn’t know sugar, they tried to improve the taste of their product by adding honey and fruit juices. If the wine appeared to be too sweet, they poured some sea water and spices into the vat. Limestone dust, ash, saffron, and whey could be added to wine to make it better tasting – and better looking, too. 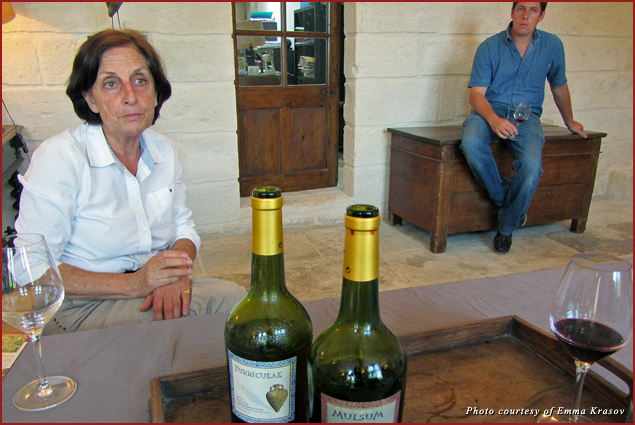 Strange as it sounds, the Roman wines produced at Mas des Tourelles according to the ancient technology are delicious and beautiful to behold. Mulsum is blended with honey, cinnamon, pepper, thyme, and other spices; Turriculae is dry, with additions of seawater, fenugreek, and concentrated grape juice; Carenum is made of late-harvest grapes and contains quince juice and herbs.

In the village of Collias, our group visited Domaine des Cabotines, whose owners not only produce wine, but also educate the public in their L’Ecole des plaisirs Bachiques (“School of Bacchus’s pleasures”). 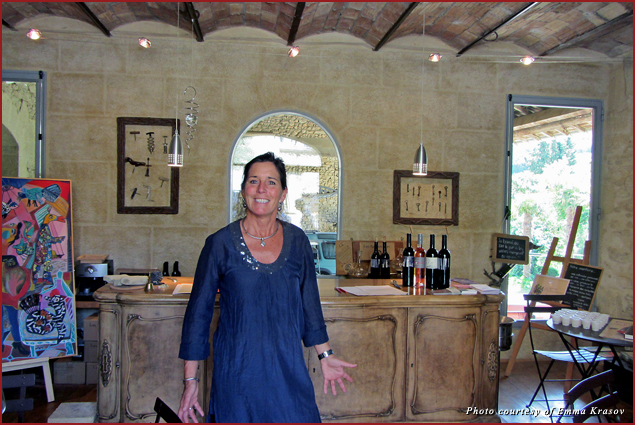 The school offers two-hour group lessons for those who want to know their wine – or to know it better. Our lesson consisted of a short lecture, some taste bud prep work, and some bottle and barrel tasting. The class was taught by Natalie, who came from the Netherlands. She showed us how to evaluate by eye, nose, and mouth the wine we were about to consume, and made us try some water with salt, sugar, citric acid, and quinine, so we could better understand what part of our palate is engaged in distinguishing different tastes.

When it came time to try some of the wines produced by the Domaine des Cabotines, my favorite was 2009 Liberte de Pansee (“Freedom of Thought”) – 50 percent Syrah and 50 percent Grenache. The wine was matured for 20 months – 60 percent of that time in French oak and 40 percent in stainless steel. It was ruby-red; black cherry on the nose; prunes, cherry, spice and pepper on the palate; full-bodied, strong, dense, but not sharp, with round tannins, and young enough to be kept in a bottle for three to five years.

After thoroughly tasting and analyzing this and other wonderful wines, we walked happily to the Le Castellas Hostellerie – an exquisitely renovated hotel in a 17th-century building in the heart of Collias. Locals and tourists alike often stop for lunch at the hotel’s restaurant, Le Castellas, ruled by Two Michelin-Star Chef Jérôme Nutile. Seated outside, in a cozy patio under blossoming wisteria, we were served by an impeccably dressed team of waiters in black suits, white shirts, and salad-green ties. 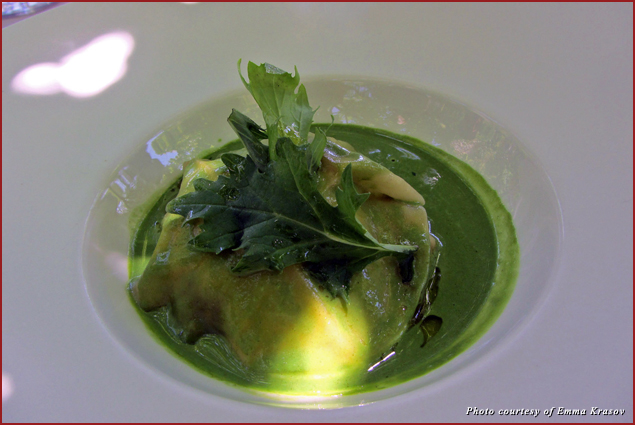 Our first course was also green – ravioli stuffed with a mixture of haddock, brandade (salt cod), chicken wings, and mussels in a velvety-green watercress bouillon. That went well with a glass of a refreshing local Viognier. 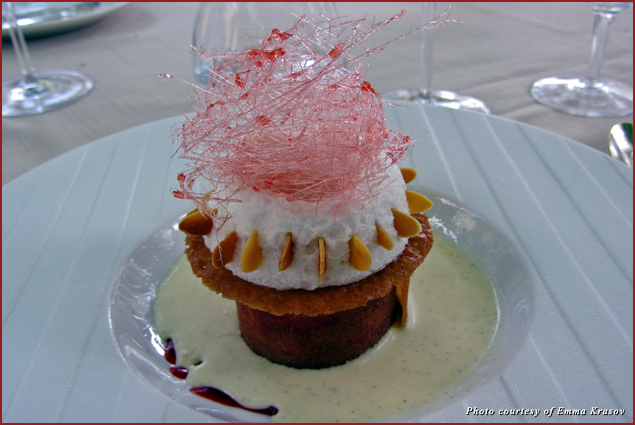 A traditional Floating Island dessert was served in a dough cup filled with whipped egg-whites and roasted almonds, surrounded by a lake of vanilla cream over rhubarb confit and Gariguette strawberries, and crowned with a pink caramel tangle.

Comptoir des Vins et Terroirs Vinotheque-Bar a Vin in the heart of the medieval walled city of Carcassonne carries several well-known wines produced in Languedoc, and presents the diversity of the local viticulture at group-catered wine-tasting events. 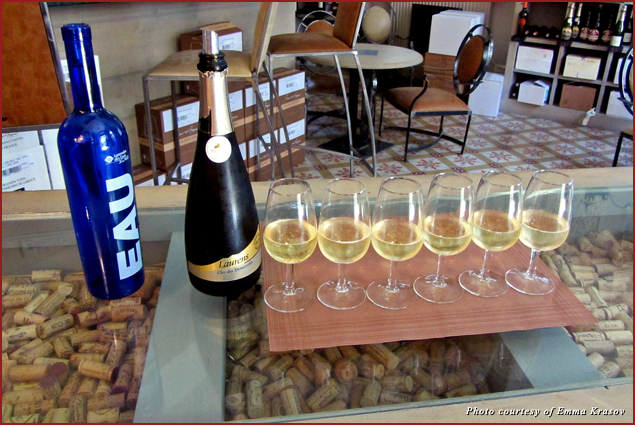 Our tasting adventure with experienced guide Stephanie Delmotte started with a closer look at the map of the largest wine-producing region in the world. This land contains different kinds of soil, from arid and rocky to clay and sandy, and experiences all kinds of weather, from high-altitude dry days with chilly nights to balmy and humid conditions in the valleys.

Thanks to the variety of microclimates and wine-producing techniques, the same kinds of grapes yield very different wines from Vignobles du Languedoc. More than 150 regional wines can be found at the Vinoteque, where new vintages arrive every year.

At lunch at the busy and friendly Brasserie le Donjon, also located in the center of the walled city, I had to order cassoulet de Languedoc – the main dish of the region. Served in a sizzling clay skillet, in which it was baked, the white bean, pork, sausage, and duck confit stew with attractively burnt edges was probably too much for a sultry summer day, but too good to resist. 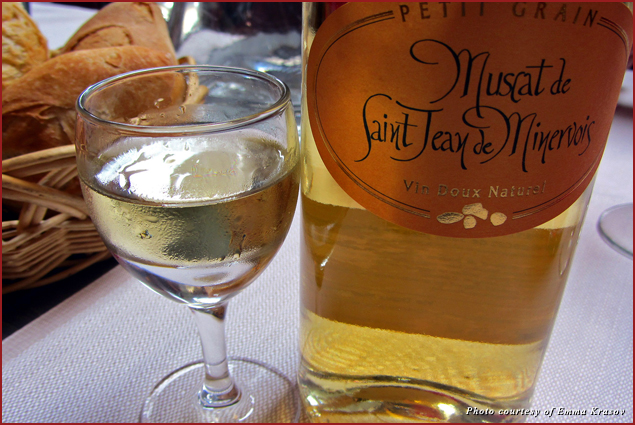 To continue our research of Les vins de l’Aude, our group indulged in a bottle of sweet and golden-hued Muscat de Saint Jean de Minervois for dessert.