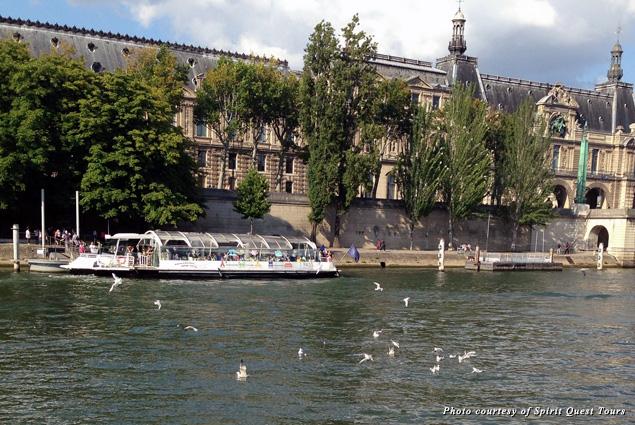 How many of us have dreamed of Paris—the Paris of the movies, of sun-drenched lazy afternoons, of people-watching from street cafés and grassy parks, of Prêt-à-Porter models striding down the fashionable Champs-Élysées, of the spires of Notre Dame piercing the clouds as the bells peal out over the city? This is the Paris of Catherine Deneuve, of Audrey Hepburn, of Princess Grace, and, lately, of Woody Allen. It is these images that have made Paris—with its iconic Eiffel Tower and its famed glass-pyramid Louvre—the most popular tourist destination in the world.

But does the Paris of the imagination measure up to the actual city? My girlfriend had never visited and always planned to, so a few weeks ago I found myself suddenly a Paris expert as I escorted her around the city, seeing it through the eyes of a first-time visitor.

We arrived on Bastille Day, July 14—France’s equivalent of the American 4th of July—which celebrates the liberation of the Bastille prison and the start of the French Revolution. We took the Eurostar over from London, which was quite easy. Be sure to book your train tickets online from home as far in advance as possible to ensure the best prices for one-way or return trips.

While in Paris, we stayed at the beautiful Relais Christine Hotel (around the corner from the Ponte Neuf, one of Paris’ most famous bridges) and at the Hotel Recamier, in the square adjacent to the Church of Saint-Sulpice. Happily, both our hotels added much to the romantic atmosphere of the city and were a welcome respite from the crowds that surge over Paris in the summer. 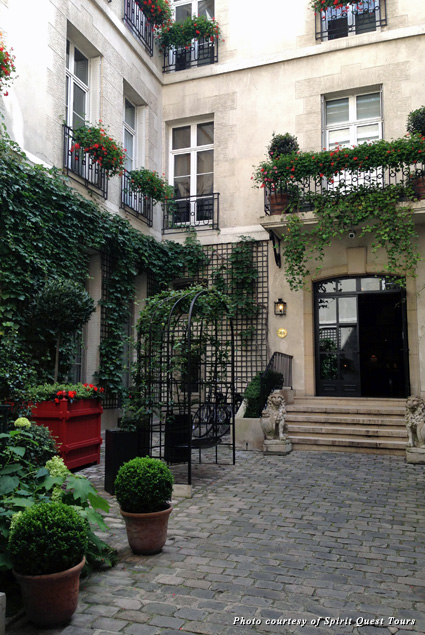 To say the Relais Christine was enchanting is an understatement. Built on the remains of an abbey, the former residence-turned-hotel is set back on a quiet street and four lucky rooms open to a private garden. Each of the 49 rooms is individually designed, and breakfast is served in the 13th century chapel crypt, completing the historic mood of the property. The hotel will loan you bikes to get around, but many local galleries and designer shops are easily accessed on foot along the cobblestone streets and several charming restaurants are tucked into the few blocks around the hotel.

The Hotel Recamier, which is also a four-star boutique hotel, boasts just 24 individually decorated, well-appointed rooms; an outdoor courtyard enhances the cozy atmosphere and is the setting for breakfast and complimentary afternoon tea. If you can, stay in the large club rooms, although all the rooms overlook the wonderful and quiet square. The hotel is ideally located just a few blocks from the pulse of the up-and-coming local designer shops and blocks of terrific bistros, making it especially ideal for a shopping holiday; ask the concierge for the secrets of the best local places. 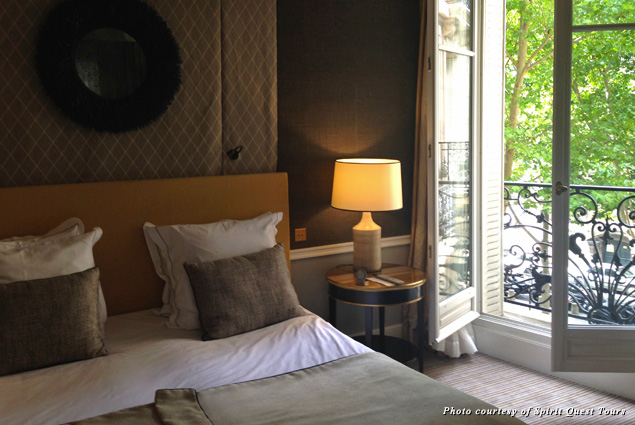 Seeing Paris by water is a delightful way to become oriented to the city and is best done via an hour-long tour along the Seine River; forgo the usual Bateaux-Mouches and instead opt for the slightly smaller and more local Vedettes du Pont Neuf. As the boat departure was from the Pont Neuf, we also got to see some of the famous “love locks,” which are actually attached to every possible spot on every bridge in the city (one recently collapsed from the weight!). Arrive a little early if you take one of these tours, as your best seating is on top and they fill each boat to capacity.

In the evening, acting on some online tips, we skipped the frantic jostling for position on the main bridges and instead caught the Metro (the local train) to Rue Pasteur, a graceful tree-lined street that slopes toward the Eiffel Tower. We enjoyed a meal at Bistro Pasteur, sitting on the street elbow-to-elbow with the locals. At 9:30, when it was finally dark enough, we walked just a few steps away to stand with Parisians and see the spectacular Eiffel Tower fireworks. Though we had a slightly obstructed view, we hadn’t had to wait or stand in a crowd for hours—well worth the trade-off. 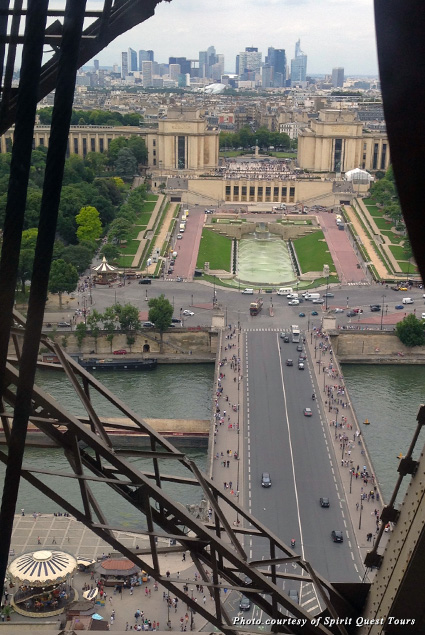 Of course, visiting Paris must include a trip to the Eiffel Tower, and one of the best choices we made was to purchase (through our hotel concierge) a “skip-the-line” tour from the local Mon Petit Paris. The tour was terrific, nearly two hours of education and walking around the base and observation decks, and we saved at least an hour, possibly two, by having to stand in neither the ticket nor the elevator lines. Be aware the only way to get up to the third floor is to buy a separate ticket, which you must stand in line for, but the second floor had terrific panoramic views of the entire city. If you truly want to treat yourself, you may also want to consider the Jules Verne restaurant on the second floor, although you’ll need to plan to reserve a table at least three months in advance.

The other “must-see, must-skip-lines” attraction is the Louvre, and the hotel concierge obliged us here by allowing us to wait just a few minutes in a small security line to get inside the huge glass pyramid that marks the Louvre’s entrance. If you arrive in the morning, it is still possible to get a photo of yourself alone at the glass pyramid despite the masses of people, as long as you stand on one of the back sides. Inside, however, is a different matter. Though I saw both the “Mona Lisa” and “Winged Victory of Samothrace” (a personal favorite), the Louvre in the summer is the Olympics of museums, a full crush of people that causes you to swim on noisy tides to see the most popular pieces. Go absolutely as early as possible, view the “Mona Lisa” and the Italian Renaissance galleries, then retreat to the lesser wings of the museum where there is relative peace and you can remember you are in one of the largest art collections on Earth. Remember to look up; the Louvre is a former palace, so the ceilings are all works of art themselves.

One of my favorite sites in Paris is the Notre Dame Cathedral. Despite long lines to get in it was only about a 10-minute wait and well worth it, as inside there is a silent prayer area cordoned off as well as the magnificent soaring ceilings and stained glass windows of the iconic church. We juxtaposed this with a visit to Sacré Coeur Cathedral in the Montmartre district, the bohemian neighborhood that was the former home of Picasso, Monet, Van Gogh, Dali, and many other famous artists. Again, the Paris Metro is the fastest way to get there, and despite the teeming pulse of this neighborhood and the hordes of people visiting the church, Sacré Coeur offered a peaceful sanctuary once inside and fabulous views of the city. 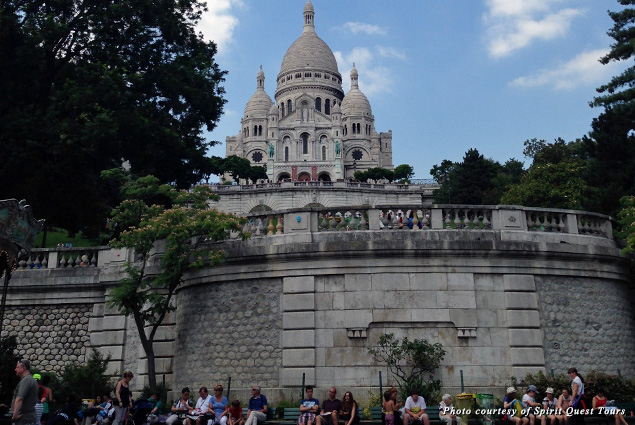 Especially if it’s your first time, don’t bother with all the iconic Parisian restaurants, which are, if not over-priced, still quite expensive. (An average two-course meal at the time of this writing was 40 to 70 euros a person, excluding wine.) Instead, dine at local bistros, which have excellent, fresh, and local options. By reading the menus in front, you can often find prix fixe meals at reasonable prices (especially early in the evening, as Parisians often eat later) and a discrepancy of up to 20 percent between places just a few doors apart.

But unless you want to pay 10 euros (almost $15) for two sodas, don’t stop at the little cafés adjacent to either the Eiffel Tower or Notre Dame. Also, know that unlike restaurants in the United States, which like to serve meat cooked medium to medium well, most French chefs will actually refuse to cook meat that much, feeling that medium rare is the ideal state for your burger or steak. Consider French cuisine is one of the best in the world before refusing to eat your entrée this way, and you might be pleasantly surprised! 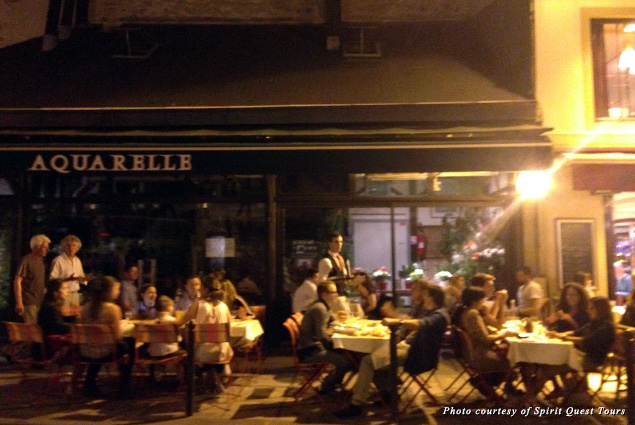 No matter how busy the city is, to find the heart of Paris it is best to act like a local. Whether it’s a few minutes walking barefoot in a park on a sunny afternoon, taking the Paris Metro, or ducking into a bakery for a croissant first thing in the morning, these simple pleasures can enhance your trip and make your first visit to Paris so memorable you won’t want to wait to go back. Consider going in March or October (when it’s not so crowded) and you will likely find the Paris of the movies and your dreams.

Living Like a Parisian Local Versailles: A Worthy Day Trip From Paris