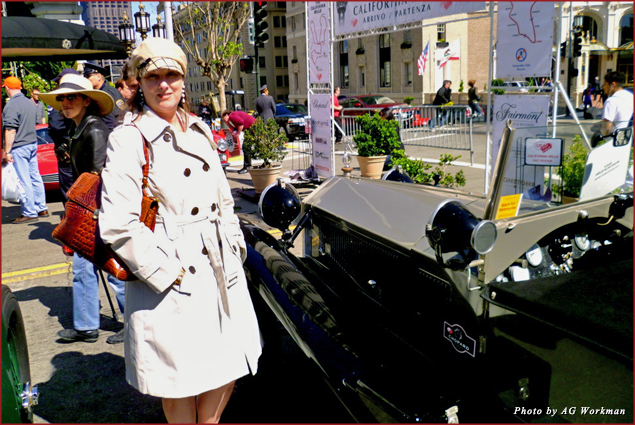 Motoring across the Golden Gate Bridge in a vintage Italian convertible was thrilling. This was the start of one of California’s coolest vintage car rallies, the California Mille, a four-day, 1,000 mile trek along the state’s back roads. Cars are at least 50 years old, and many are European, although exceptions are made. 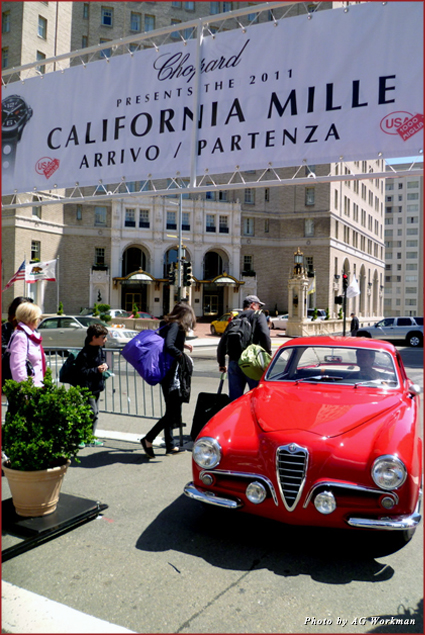 The California Mille is based on the Mille Miglia, the Brescia-to-Rome race which features mostly Italian cars. Over 70 vintage cars were displayed at the Fairmont Hotel the day before the big race. Owners are on hand to answer questions about their cars. Admiring the beautiful cars was part of the fun. 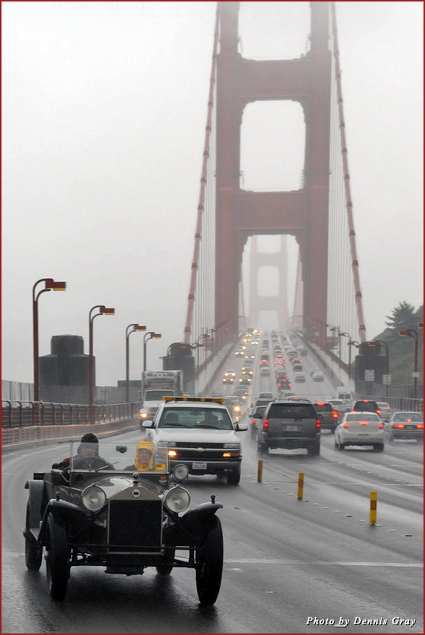 Riding along in the rally was even more fun. The cars drove out oldest to newest from the Fairmont Hotel. I was riding in the lead car, a 1925 Lancia Lambda driven by owner Martin Swig. We waited for the race to start, indicated by the lowering of the checkered flag, while news crews captured this momentous occasion. Suddenly we were accelerating through the balloon arch along California Street toward the Golden Gate Bridge. The rain which heralded the start of the race was replaced by sunshine and clear skies within a few hours, a good omen. It was a great start to the day. 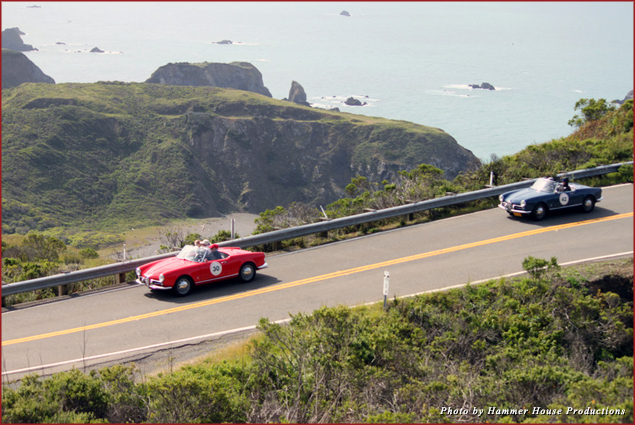 The route favors windy back-roads where the cars can test their true abilities. Driving along the scenic country roads of Marin, Napa and Sonoma with other vintage cars as far as the eye could see was quite a sight. The rally attracts viewers both old and young, smiling and waving as the cars race by. 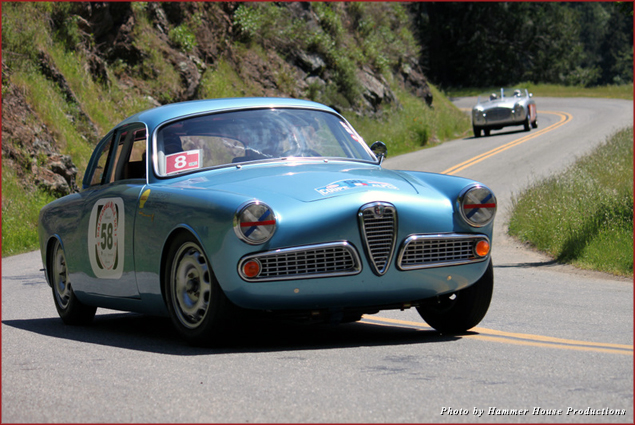 The race was conceived by Martin Swig and John Lamm of Road & Track after they participated in Italy’s Mille Miglia in 1982. Northern California has scenic roads that are perfect for such a race, as well as the amenities of restaurants and inns along the route. In its 21st year, the California Mille has been an unqualified success. Of the 70 cars that join the race, many are repeat participants. While the Italian race is very competitive, the California Mille is about enjoying driving vintage cars, beautiful scenery and camaraderie. 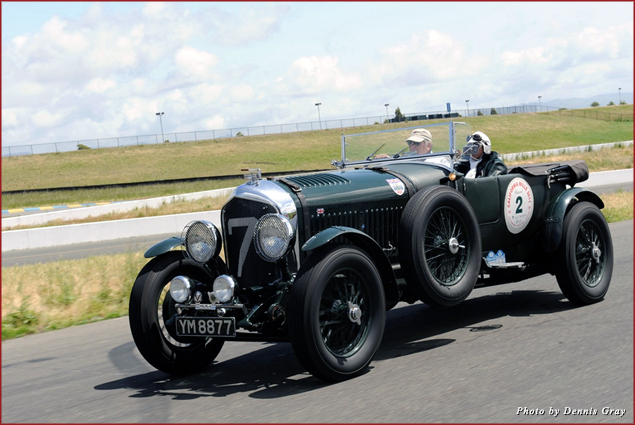 During the first day the Mille route included a stop at Infineon Raceway where they were allowed to make touring laps. Screaming around the track as fast as the car could manage was a thrilling experience. During the lunch stop at a private wine country estate, participants were overjoyed to view the private vintage car collection. Even the jaded collectors were appreciative of this rare and extensive collection of cars in one place. Seeing the Mille cars parked at the estate was a sight to behold. 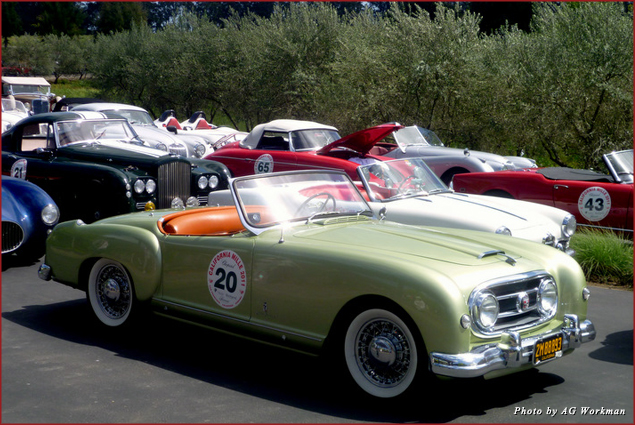 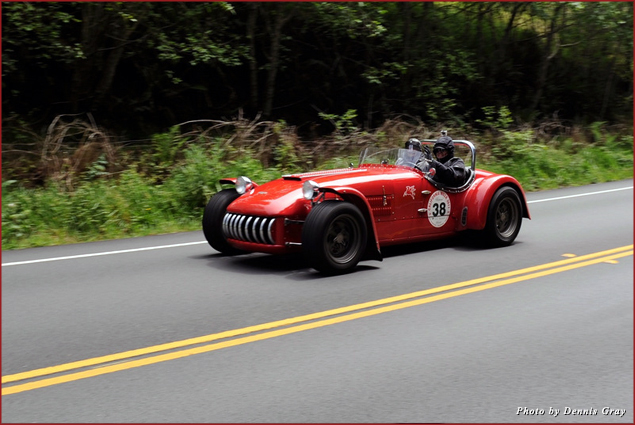 This year only one car broke down, couldn’t be fixed and was sent home. A chase crew followed the race with master mechanics, who have 30 minutes to fix broken-down cars. Cars that can’t be fixed in half an hour are towed away. 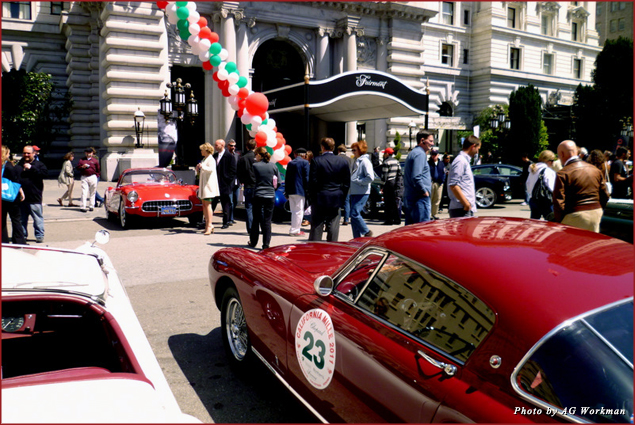 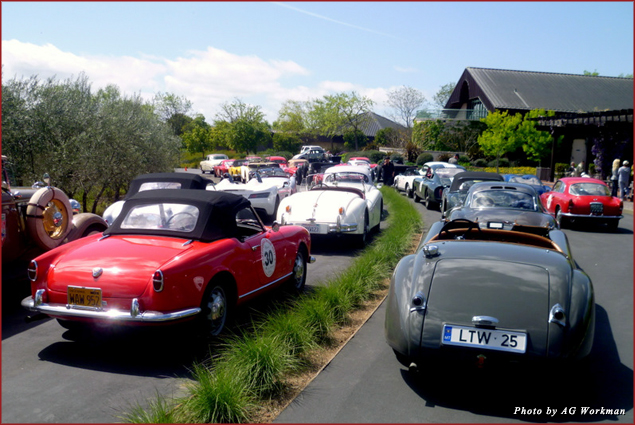 Details: The California Mille is held every year in April. Visit the website for more information about the event.

The Fairmont Hotel is located at the top of Nob Hill at Mason and California Streets. The Mille Brunch is organized by the Fairmont Hotel and the Nob Hill Association. Solage Calistoga is one of Napa Valley’s newest resort destinations with 89 eco-friendly accommodations, outdoor pool, spa, restaurants, bocce ball, and complimentary bicycles during your stay.