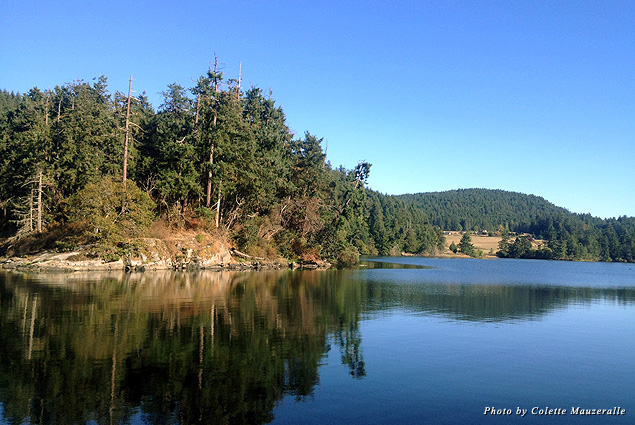 Vancouver Island is often dubbed one of the best islands in the world, though it isn’t studded with towering palm trees or soft white sand beaches. It is a land of steep mountains, cobalt lakes, and dense forests growing right up to the island’s 2,136 miles of shoreline. On Vancouver Island—the largest off the west coast of North America—visitors come face to face with a variety of experiences, from small towns and outdoor adventures to modern city living amid urban landscapes. This quintessentially Canadian terrain also teems with bald eagles, black bears, and orcas. It would make sense then, with so many points of interest, that an oft-preferred way to discover Vancouver Island is to spend several days road tripping through its varied regions. 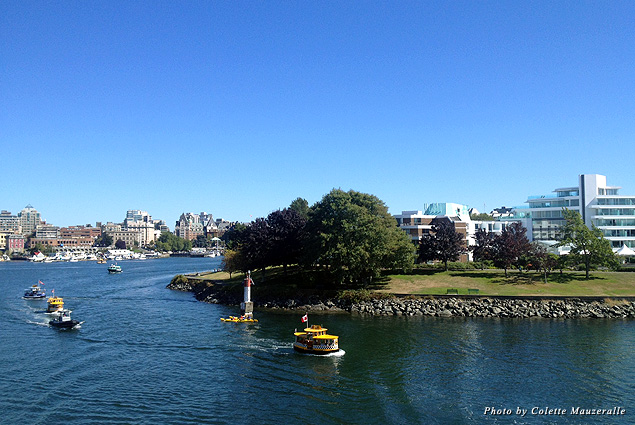 The starting point for many an exploration, Victoria is the capital city of British Columbia and the crown jewel of Vancouver Island. Its British influence becomes apparent via a stroll along the city’s walkable waterfront, where tearooms, prim gardens, the Neo-baroque style Parliament Building, and the iconic Fairmont Empress Hotel all reside.

During the day, seek out locally fished seafood at area restaurants and visit the British Columbia Museum of Natural History. Once the sun begins to dip, make way to the western side of Victoria’s Inner Harbour, where a nighttime outdoor market boasts crafts, artisan goods, and street performers known as “buskers.” At nightfall, peer back across the water to see the stately Parliament Building lit up in white lights, a year-round delight for visitors. 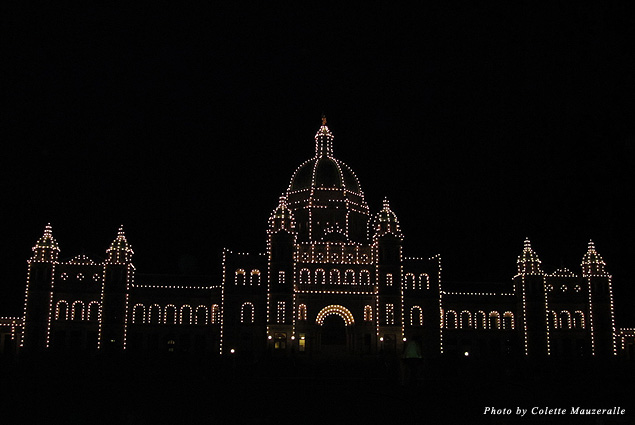 Upon leaving Victoria, visit the Uplands, an affluent and pristine neighborhood bordering the similarly named Uplands Park. Getting out of the car to hop across the rocks at scenic Cattle Point comes highly suggested. From here, travel north to Saanich, portal to the island’s famous Butchart Gardens, elaborate and expansive grounds built over a limestone quarry more than a century ago. This internationally acclaimed destination is visited by nearly one million tourists each year.

Farther north is the small town of Sidney; make a stop at the Sidney Fishing Pier for a stretch of the legs as you take in the local fishermen’s daily gossip and playful seals darting under the pier. Then, it’s back in the car to meander back to Highway 19, a north-south route running the length of Vancouver Island and known to locals as the “Island Highway.” 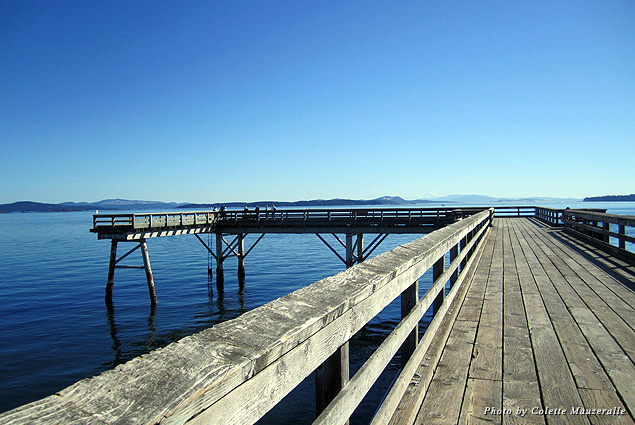 Travel tip: After exploring the Victoria-Saanich-Sidney trifecta, but before heading north into a more nature-filled region, international visitors might consider grabbing a few Tim Hortons donuts for the road. The chain is Canada’s answer to Starbucks, and a chat with Canadian customs personnel will reveal it is common for travelers to load up on Tim Hortons pastries before leaving the country.

“Cowichan” translates to “the warm land”—a fitting name for a valley that boasts Canada’s warmest average temperatures. Cowichan Valley is a charmingly mixed bag of wineries, farmland, forests, and beaches. Its must-see small towns include Chemainus, renowned for its colorful murals and a quaint town center, and Ladysmith, plentiful in oysters and built on the side of a steep hill that overlooks the Strait of Georgia. Breeze through both to fill up on gift stores, coffee shops, and picturesque settings. 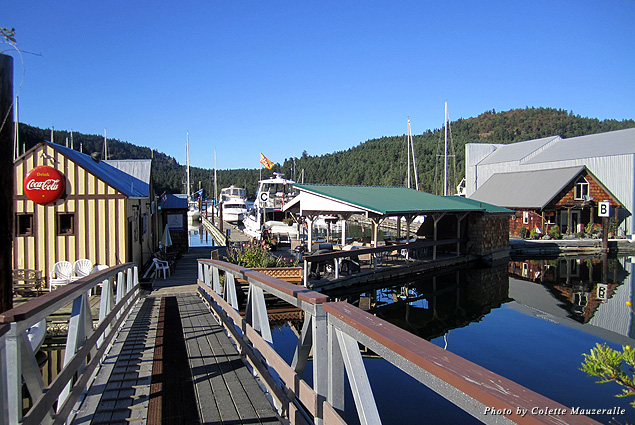 Travel tip: Drivers seeking a tranquil escape can—and by all means, should—route the car to Genoa Bay to discover a secluded marina encircled by heavily forested hillside and a blissful lack of urbanization. Arrive in time for lunch or dinner at Genoa Bay Café, the community’s only restaurant, and enjoy cuisine such as Salt Spring Island Mussels served alongside stunning views.

Coined the “Harbour City” (among other choice nicknames including “Bathtub Racing Capital of the World”), Nanaimo’s lengthy Waterfront Promenade is ideal for taking in the city’s coastline and marina-front parks by foot. Visit the historic city center long enough to peruse through a few shops, including a pair of back-to-back used bookstores. Note Nanaimo is known for having several pubs, should a celebratory drink be in your future. The city is also a hub to several other parts of the island, and for those feeling landlocked, BC Ferries offers a scenic two-hour trip to British Columbia’s mainland city of Vancouver from Departure Bay.

Travel tip: Don’t leave without trying an authentic Nanaimo Bar, a Canadian pastry formed from layers of chocolate, coconut, and buttercream. These bars are so popular the city has even created a Nanaimo Bar Trail Map Map for enthusiasts. 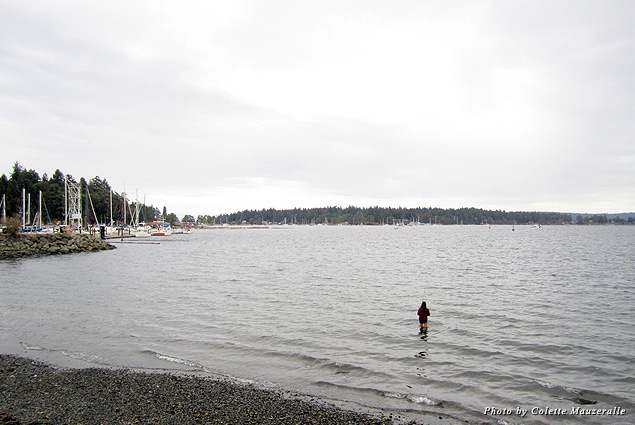 Moving north along Vancouver Island’s eastern coast, drivers pass through the town of Courtenay (pronounced “Courtney”), located within the Comox Valley. Though Courtenay may not rank as one of the island’s top tourist destinations, the walkable downtown neighborhood serves as a welcome break on the drive between Nanaimo and Campbell River. Courtenay boasts a selection of shops that carry the works of local artists, such as the South Hollow Gallery, where gifts range from eclectic earrings to river rock soap dishes. 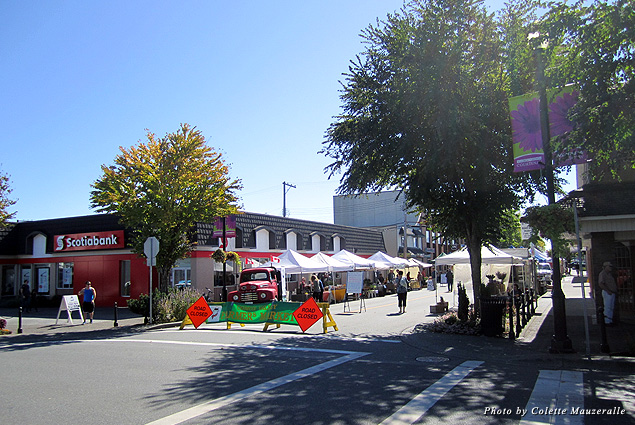 Campbell River, situated on the 50th parallel and known for its salmon-filled waters, is the last major urban area for those driving northward along the island. While in town explore the length of the waterfront, beginning at the Discovery Harbour Marina. Inland, forest trails within Elk Falls Provincial Park are popular with the locals, as is the Quinsam Salmon Hatchery. This far north, visitors may also be interested in outdoor tours that include spelunking, canoeing, and snorkeling with salmon. 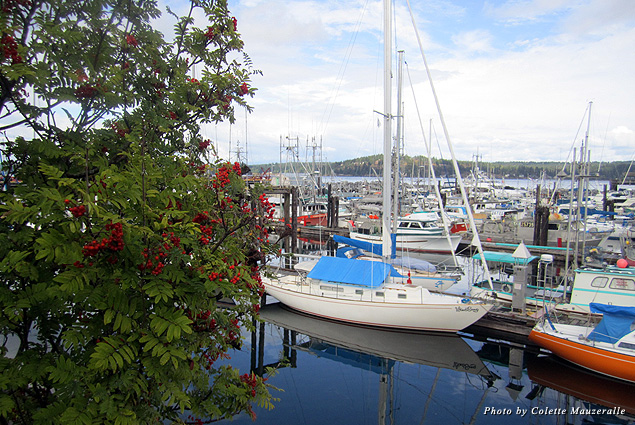 Travel tip: Along Highway 19A in the heart of town sits a small British store selling authentic English candies, sodas, and other rare treats. Service is friendly, and hot English teas are available to those who take a seat at the store’s window-front tables.

Safe to say, it’s the adventurous set that tends to traverse Vancouver Island’s final stretch of the Island Highway to reach Port Hardy, the jump-off point for a 16-hour ferry ride to Port Rupert and the gateway to Cape Scott Provincial Park.

En route to Port Hardy, visitors can veer off the Island Highway to drive through Sayward and reach Kelsey Bay, a blink-and-miss-it coastal community. From Kelsey Bay’s main dock one can watch the bay’s calm waters collide with the rough ocean currents coming down from the north side of the island. Sightings of orcas, eagles, and more are common here as well as in Telegraph Cove, an even smaller nearby community that thrives each summer despite a year-round population of only twenty residents. 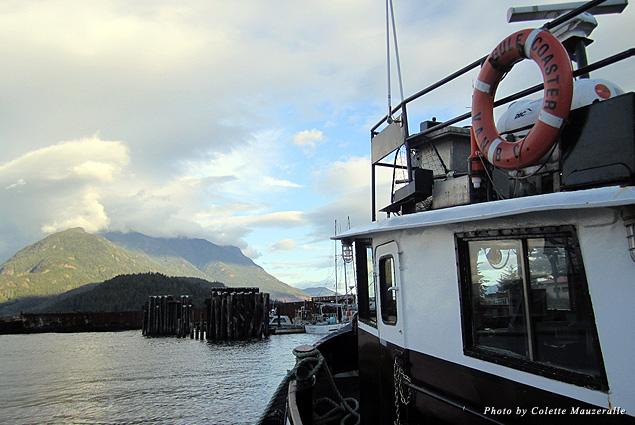 Travel tip: On the way to Port Hardy, watch for signs that indicate a viewpoint for the Seymour Narrows. Below this water’s surface once lay Ripple Rock, blasted away in 1952 to increase the safety of vessels passing through. Seymour Narrows has long been considered one of the worst hazards to marine navigation on the British Columbia coast.

While Vancouver Island’s east coast provides a string of lovely small towns, many who visit the island do so to check out its remote west coast, particularly Tofino. Often thought of as “the Whistler of Vancouver Island” because of its popularity as a tourist destination, Tofino is a world-renowned surfing town and a three-hour drive from the island’s eastern shore. In fact, many choose to fly in to the Tofino Airport to bypass the winding, mountainous Highway 4. Once in town, start the day alongside the locals at Common Loaf Bake Shop, then burn a few newly gained calories on a hike to Tonquin Beach, located on the backside of town. Another way to burn those calories is with a surfing lesson from Pacific Surf School, though more experienced folk can rent gear and take to the waves on their own.

Spend some time wandering Tofino’s galleries and gift shops, and come dinnertime take a table at Wolf in the Fog. This foodie hotspot offers a hyper-local experience for those who pair its award-winning cuisine with the ever-on-tap Tofino Brewing. Close out the bill, then close out the day with a sunset at Wickaninnish Beach, a driftwood-laden stretch of sand and a pristine place to watch the sun sink below the ocean.

Travel tip: The demand is often greater than the supply when it comes to Tofino’s hotels, so ensure your lodging is booked at least two weeks ahead of time—or more if visiting during the height of summer. Should all else fail, last-minute accommodations can often be found 45 minutes down the road in the town of Ucluelet.

Tofino’s southerly neighbor, Ucluelet —Ukee (“you-key”) to the locals—was built on the backs of the logging and fishing industries but is now a common destination for outdoors adventure travelers. Many escape to Ucluelet for fishing, kayaking, whale watching, and more, and a large number of visitors go to hike the town’s Wild Pacific Trail, an impressive three-part coastal path with striking views of rugged shoreline and the historically significant Amphitrite Point Lighthouse. Back in town, check out the Ucluelet Aquarium, and should all the exploration have worked up a thirst, head to Eagle’s Nest Pub, a waterfront bar overlooking a tranquil marina.

Travel tip: For unusual accommodations, consider booking a room on the Canadian Princess, a ship-turned-salmon-fishing resort that spent 43 years on the water before taking her place in Ucluelet’s tourism and hospitality industry.

Vancouver Island holds more diversity than one might imagine, and with its array of modern and rural communities set in between mountains, valleys, and coastline, there are seemingly unending adventures to take as Canada delivers its own, wilder version of “island living.”