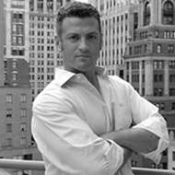 Lee Abbamonte is the youngest American to visit every country in the world. He has appeared on NBC, CNN, ESPN, GBTV, Fox News and has been featured in the New York Times, Washington Post, Bloomberg, Smart Money, Slate, OK! Magazine, and on Peter Greenberg radio. He has visited 301 countries and is one of the world’s most-traveled people. Lee is an active member of the exclusive Travelers Century Club, a fellow of the Royal Geographical Society, and a member of the Circumnavigators Club.

Some of Lee’s extreme traveling highlights include hang gliding over Rio de Janeiro, dodging bullets in the Libyan civil war, conquering the world’s highest bungee jump in South Africa, tracking silverback gorillas in Rwanda, summiting Mt. Kilimanjaro in Tanzania, going on safari in the Serengeti, and white-water rafting down the level-five rapids of the Zambezi River in Zimbabwe.