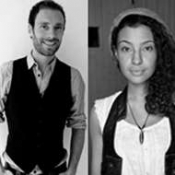 Tamy wants to give travelers the opportunity to experience Montrèal in style, and to get to the heart of the city. She believes that itπs the people who make this city. The experience here is all about the welcome, the diversity, the mix of cultures. Montrèal is multidimensional, like Tamy. Being multidimensional helps her avoid boxes, and she don't like boxes except shoe boxes, and hat boxes.

Daniel Baylis grew up in a generic Western Canadian city where the cultural norm involved trips to Costco and Tim Horton's. He arrived in Montrèal in 2003 to marinate in something different: European flair, a thriving arts scene, sexual and ethnic diversity, French language and urban charm. Originally his plan was to stay for a year. But now it's 2010. You do the math. In his spare time, Daniel can be found watching documentaries, practicing yoga, sipping red wine and attempting to twitter into the heart of Dolly Parton. Daniel loves it when readers contact him.