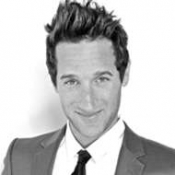 Canaan Rubin is a modern day multi-media guru. A powerful writer, producer, director, storyteller, photographer, and videographer whose work has been enjoyed by millions, Canaan also appears frequently on-camera. Canaan rose through the ranks at traditional media powerhouses such as Paramount Studio, CBS, MTV, and "Entertainment Tonight," and today loans his expertise in creating custom celebrity content to digital giants including Zappos, Zappos Couture, Ustream, and HipHollywood. Canaan advances the content he creates using custom social media campaigns so the content is not only created per a client's direct needs, it is also pushed seamlessly to the client's customers on point and on brand. Canaan is perhaps best known for creating and executive producing MTV’s hit show "Duets." He also served a long stint as senior writer, producer, and director for CBS’s #1 rated show "Entertainment Tonight" and is a frequent contributor to hit shows such as "Dr. Phil," "The Talk," and "Rachel Ray."

Canaan is co-founder and co-president of A-List Content, which produces weekly fashion trend series seen across the globe by millions. He is both creator and executive producer of "The Trend," A-List Content's flagship series, which has appeared on E! News, and is a regular weekly feature on Zappos Couture in the US and Celebrity Scoop internationally (distributed by FCCE). A-List Content creates custom-built television campaigns for both TV and web distribution platforms. The company recently created "My Street Style" for Zappos' main site.

Canaan has traveled to more than 60 countries for both work and pleasure and calls Los Angeles, New York, and Amsterdam home.