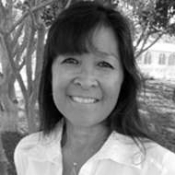 Born and raised in Southern California, Athena Lucero has been writing about travel since the early 1990s, a profession that happened by accident (well, sort of) and which she considers a privilege.

Most of her working life was in the world of corporate administration—an international law firm, engineering, business consulting, and academia. When vacation time came around, her bags were packed. That wanderlust became a passion and eventually her job.

For Athena, it’s both thrilling and humbling going somewhere she’s never been before (such as the magical Canary Islands off the northwest coast of Africa), embracing the inhabitants of a locale (such as the French school children on a field trip to the local butcher), learning about history and culture (such as the legendary gauchos of Argentina), and feasting on local cuisine (such as the requisite cheese fondue after a satisfying day skiing the Swiss Alps). Food is the international language, Athena says, because it brings people together.

Travel is about curiosity, discovery, opening one’s mind, and sharing. Athena is happiest when she’s researching and more so when she writes about her findings. Through her stories she takes readers along on her rambles around the globe as she veers off the beaten path to explore, mingle, eat, challenge herself to try new things, and encounter the unexpected with the hope that her tales will entertain, educate, and inspire.