Upping the Airline Stakes: Off to Vegas With Virgin 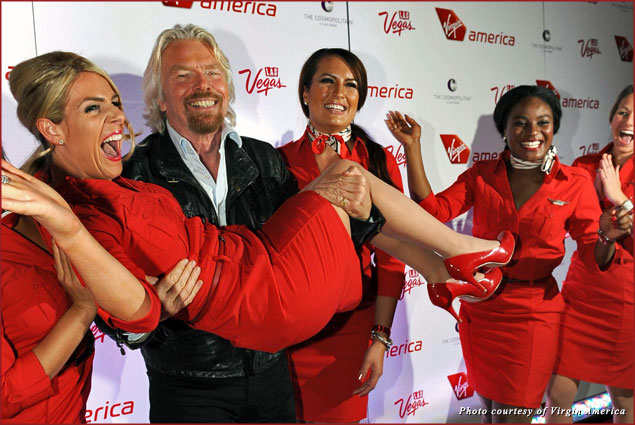 You might be surprised to learn Virgin America has never flown the Los Angeles-Las Vegas route since it seems like such a natural run for the popular San Francisco-based airline. But until Monday, April 22, 2013, the United States arm of Sir Richard Branson’s Virgin empire (he owns 25 percent of VA) didn’t make the 45-minute trip from Hollywood to Sin City.

All that changed on April 22, as Branson and a collection of his famous friends (and a group of media types, including me) hopped on the inaugural flight for a massive celebration that went well into the wee hours. 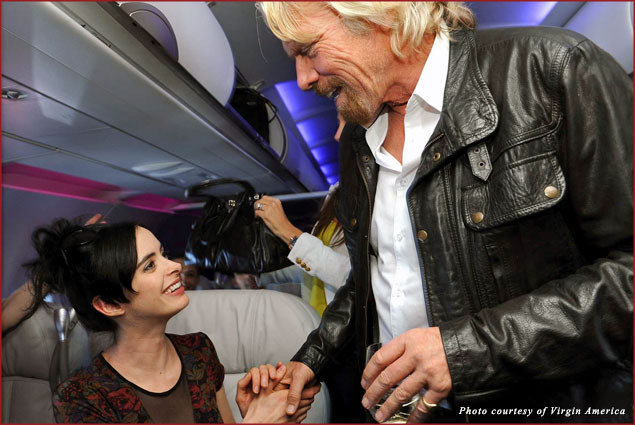 “The new lounge at LAX was a lovely surprise to me,” Branson said amidst the hubbub. “Our team has done a great job with it. I think when you start your journey in surroundings like this it makes for an excellent trip. People seem to enjoy flying Virgin Airlines, and it seems to fit right in with flying into Vegas.”

Entering the Airbus 319 for the flight, we encountered more mod touches, such as alternating mood lighting (purple and red were the chosen colors), disco beats, and surprisingly spacious seats, even in economy class. After a smooth, quick flight cheers went up as the plane touched down; when all the inaugural travelers reached the end of the jet way everyone cheered again as flight attendants waited with “Virgintini” cocktails courtesy of the Cosmopolitan Hotel to really get the celebration going.

Branson, Virgin America CEO David Cush, and members of the Las Vegas Convention and Visitors Authority took turns making speeches, reminding everyone the airline will fly three flights each way most days. Then it was off to the Cosmopolitan Hotel for a night of partying at the posh hotel’s famed Chandelier Bar, a three-story party place built inside an actual gigantic chandelier. 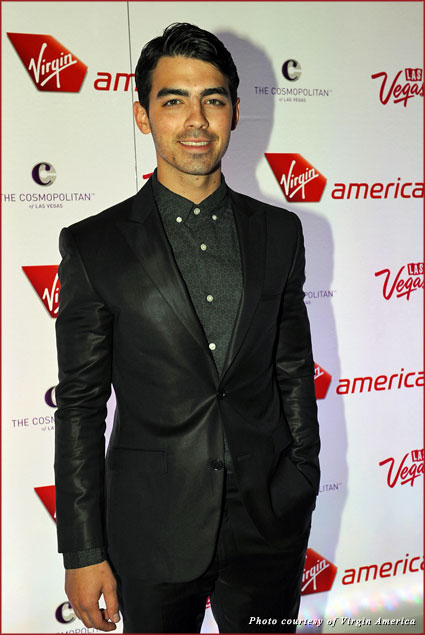 And while Joe Jonas and Jaime Pressly caused palpable excitement and applause from the crowds that gathered to watch the red-carpet photo moments, it was Branson again that drew the most buzz. Even though he didn’t parachute off the side of the hotel (as he infamously did in 2007 at the Palms Hotel, banging into the side of the building on the way down), he still created quite the stir by talking about his next adventure.

“I’m headed to the Mojave Desert next,” the charming billionaire revealed, “to be there for our first flight in our spaceship! We’re hoping to break the sound barrier. This is going to be Virgin Galactic’s year. I’ll be on the first official flight, which we look to have in the first quarter of next year.”

Now THAT is the flight we’d really like to take off on!