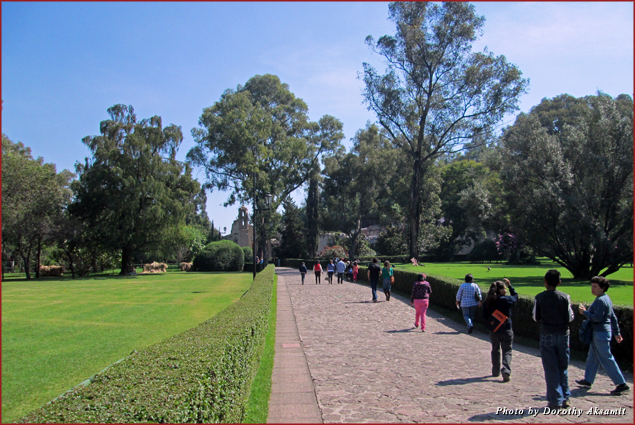 High on my museum list was the Dolores Olmedo Museum located in an opulent former hacienda in the south of Mexico City. Not only could I get a peek at a lavish lifestyle not generally available to the public, but Dolores Olmedo also put together incredible art collections. In addition, I was fascinated with her relationship with Diego Rivera, who seemed to attract strong women.

Dolores Olmedo had an amazing life, not only for a Mexican woman but for a woman anywhere. She became a successful businesswoman at a time when the idea of a glass ceiling would have been preposterous. She made her fortune literally brick by brick by buying, one at a time, 40 brick ovens in Naucalpan. She eventually partnered with her rival, factory owner Heriberto Pagelson, and their construction companies morphed into an enterprise that had contracts with the federal government.

Dolores and Frida Kahlo both met Diego while he was painting murals in the halls of the Ministry of Education in 1928 when they were barely 20 (although these dates have been variously reported, with some accounts stating that Dolores was much younger). When Dolores’ mother gave Diego permission to paint her daughter, she was unaware Dolores would become a model for 30 nude paintings. Dolores and Diego’s paths parted until after Frida’s death in 1954. Diego’s tumultuous relationship with Frida—including marriage, divorce, and remarriage—is well known; less well known, at least north of the border, is the story of Dolores and Diego. 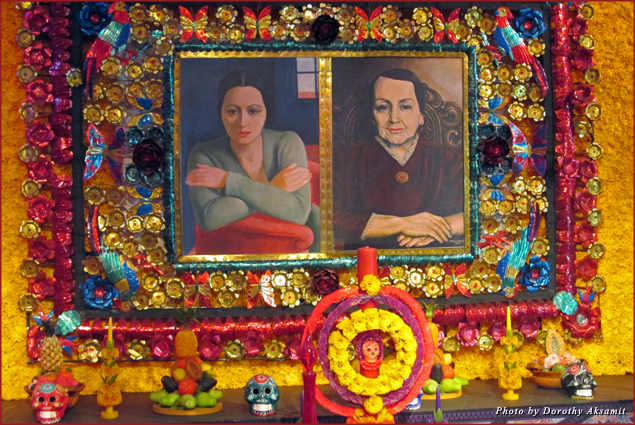 By the time Frida died, Dolores had married and divorced her first husband (British journalist, Howard Phillips, founder of the cultural magazine, Mexican Life), the father of her four children, and had married and divorced twice more. She had become a wealthy businesswoman, a socialite, and a patron of the arts. In 1968, Dolores bought sixteenth century La Noria Hacienda, which she restored; at her death in 1992, she donated her estate and extensive collections to the people of Mexico.

Shortly after Frida’s death, according to the museum website, “Together with a group of friends [Dolores and Diego] traveled to the charming island of Janitzio in the middle of Lake Patzcuaro, in order to visit the famous cemetery during the ceremony of the Day of the Dead. Thus was rekindled an old friendship … which would endure until the death of the great painter.” 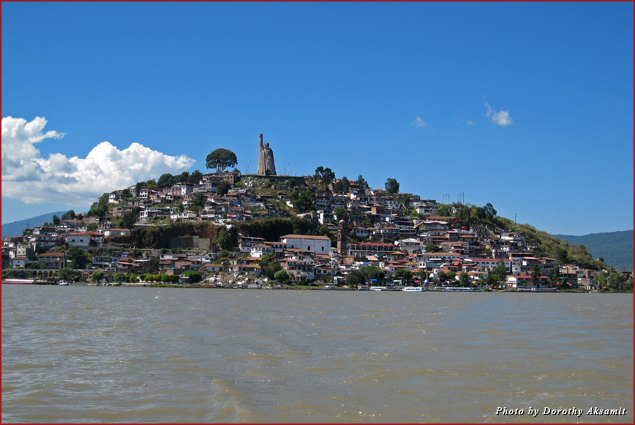 And so it seems fitting the first exhibit on the eight-acre estate is devoted to artistic interpretations of the Day of the Dead. This is the only museum exhibit where photography is allowed, and everyone lingers far too long photographing the outrageously imaginative displays while beyond this building, across acres of beautifully manicured lawn are some of the most important art collections in Mexico. 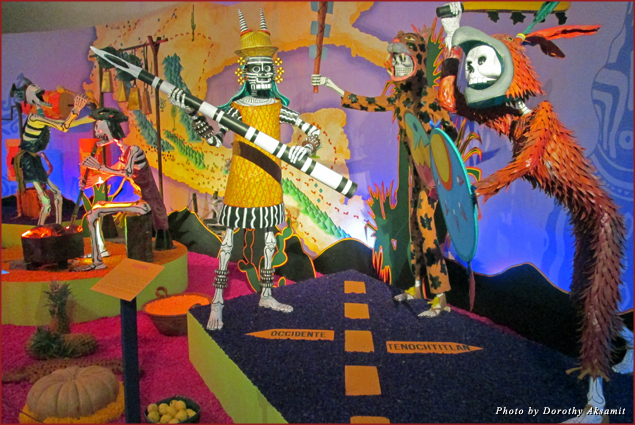 On the stroll to the five-building museum complex, everyone pauses to photograph the statue of the enigmatic Xoloiztcuintle dogs, and everyone is startled when two of the dogs move. Only the large dog is a bronze statue; the hairless dogs are sleek and pampered. The guide told me their skin is sensitive and sunscreen is applied daily. The Xolo, a primitive, fiercely loyal breed, were a favorite of Frida’s and were included in several of her paintings. Strolling the grounds with the dogs are peacocks, geese, and ducks. Twenty-five species of native plants make the gardens alone worth the trip. 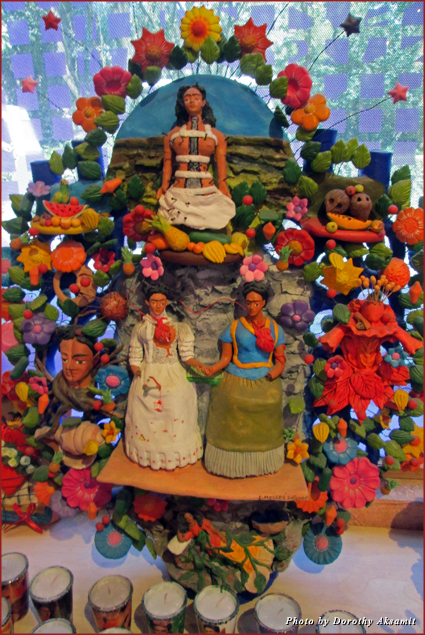 Of the 145 Diego paintings in the museum there are 20 of 25 sunsets painted while he and his third wife, his longtime agent Emma Hurtado who he married a year after Frida’s death in 1954, were houseguests of Dolores in Acapulco. This was during the last three years of Diego’s life when he knew he was dying of cancer. The sunsets seem quiet and peaceful with the fiery spirit of Diego consumed by disease. At that time he made a list of the paintings Dolores should acquire for her collection. The list included 26 of Frida’s paintings, including “Broken Column,” a painful depiction of the spinal injury she suffered in a bus accident when she was 18. Before Diego died he made Dolores the administrator of his estate, which included Frida’s estate. 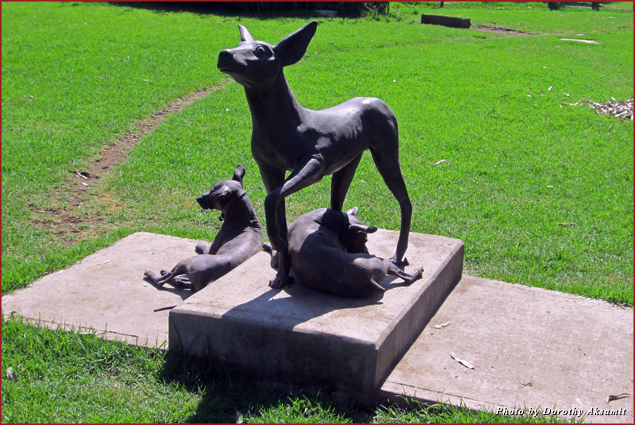 We breezed through the private living quarters sumptuously furnished with memorabilia from Dolores’ travels: ivory, jadeite, cloisonné, and the silver dining set of Maximillian (the Austrian Emperor of Mexico’s second Empire). I was more interested in the folk art, especially the prehispanic collection of Xolo dogs. These dogs were found in the underground shaft tombs of Colima where they were thought to accompany the dead to the next world. They could furnish not only direction, but also food and warmth. Because Xolo’s are hairless, their body temperature seems warmer to the touch and made a great heating pad. Could this have been the reason Frida, who was constantly in pain, was so fond of them? 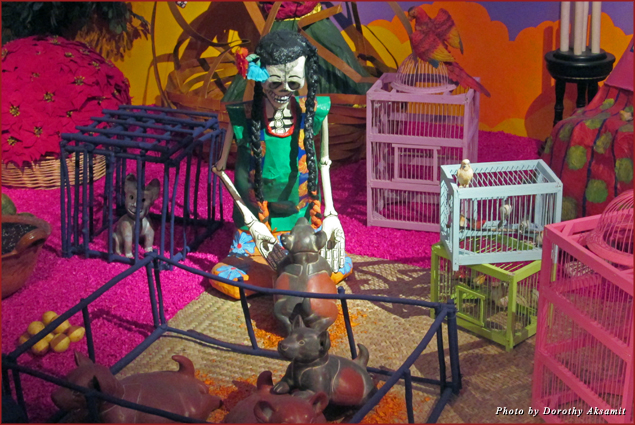 An exhibit I was curious to see was that of another of the amazing, multitalented women Diego loved and left. Diego met Angelina Beloff in France when he was on a grant furnished by the Mexican government. Beloff had a classical art education in Russia, which she continued in France. Her works include oils, watercolors, stone, woodcuts, pinpoint engraving on metal, and sculpting. She helped support Diego while they were in Paris, and their common-law marriage lasted from 1911 until 1918; they had a son who lived only fourteen months. In 1918, Diego had an affair with another Russian artist, Maria Vorobieff, with whom he had a daughter. In 1921, he lost his funding and had to return to Mexico.

Despite Diego’s lack of interest, Angelina went to Mexico eleven years later. By that time Diego had married model Guadalupe Marin, had two daughters, divorced Guadalupe, and married Frida. Although Diego never acknowledged his relationship with Angelina, she forged a niche for herself in Mexico City’s art world by working for the Department of Education and co-founding Salon de la Plastica Mexicana for the promotion of Mexican art. The Beloff collection includes engravings, watercolors, sketches, pinpoint metal engravings, and woodcuts. Angelina illustrated Hans Christian Andersen’s “The Tin Soldier,” as well as Jack London’s “Build a Fire.” 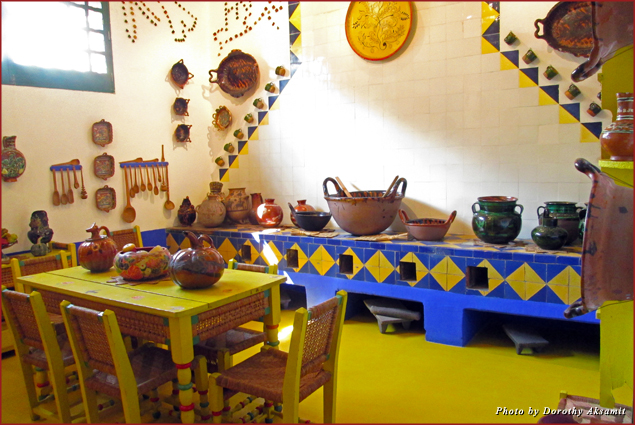 We should have allowed another hour to relax with a cup of coffee in the café, but we had to rush to La Casa Azul, the Museum of Frida Kahlo, before it closed. 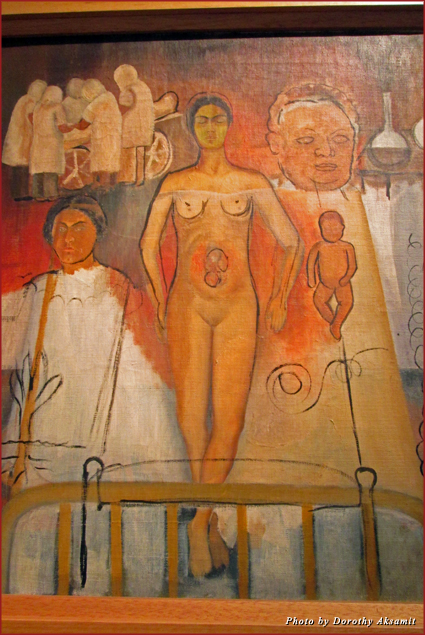 You can’t miss Frida’s blue house, set right on the street with long lines of fans, each with a camera waiting to pass through the entrance between the blue walls and into the courtyard with the house on the left. The rooms are small, down-home cozy with the walls filled with her paintings. As we moved in tandem through the living room and dining room it felt as if we would find Frida in the next room. She seemed to have just left her bright traditional kitchen and Diego had just stepped out of the bedroom, where his jacket and hat are hanging. 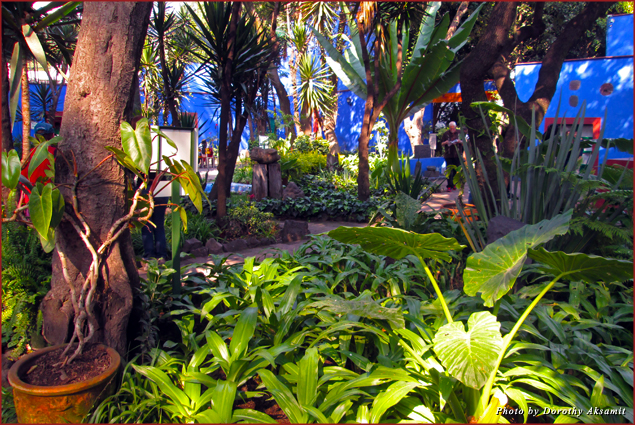 The wheelchair in her studio was a poignant reminder of the tram accident that occurred when she was 18 that left her in her pain for the rest of her life. The physical and emotional pain she suffered are vividly illustrated in her paintings. She painted it all: her tumultuous relationship with Rivera, the agony of not being able to have a child, her infidelities and his. It was as though I was passing through an illustrated biography of pain, and it was a relief to exit through her lush garden with its little pond inset and a mosaic of frogs, the nickname Rivera gave himself.

But Frida lives on, not only in her paintings and exhibitions, but also on a Mexican bank note, a United States’ stamp, novels, a movie, a play, and an orchestral song cycle. An opera, “Frida and Diego,” will be presented in Helsinki in 2014.

The Dolores Olmedo Museum and La Casa Azul couldn’t be more different, but both are linked though Diego Rivera. It was under his guidance that Dolores put together and expanded her collections, including Frida Kahlo who was not that well know at the time. In designating Dolores as administrator of his estate Diego ensured a body of his work and of Frida’s would be kept together in museums that could be enjoyed by all of the Mexican people.