Travel on a Budget Throughout Myanmar 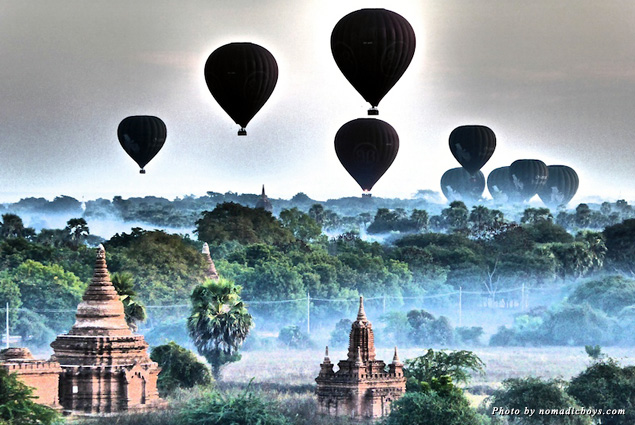 In January 2015, my partner Sebastien and I left our comfort zone in Bangkok for more Asian travel fun in Myanmar. As with all our travels, our aim is to stick to a budget of around £30 (around $45) per person per day. We read numerous guides and blogs warning us about how expensive Myanmar had become, particularly accommodation, but despite this we averaged a daily spending of £23 ($35) per person for everything.

On this trip we visited the “Big Four,” a popular way to see Myanmar. This itinerary includes Mandalay, Bagan, Inle Lake, and Yangon. 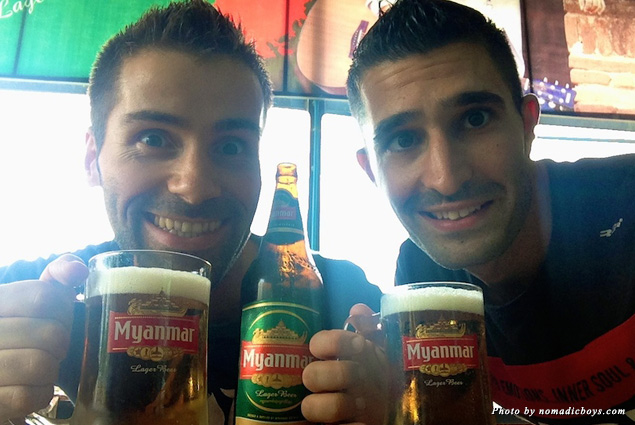 Mandalay (in the central part of the country) was our first insight to Myanmar. We stayed at the excellent Yoe Yoe Lay Guesthouse, paying $30 a night (with breakfast) for an ensuite double room.

The charismatic owner of Yoe Yoe Lay, called Nan Mwe, was like our Burmese mama. She taught us a lot about Burmese cuisine, the customs, and particularly the distinctive thanaka, a yellow clay face paint worn by Burmese women, children, and some men throughout the day. It acts as a sunblock and is believed to prevent ageing and acne. 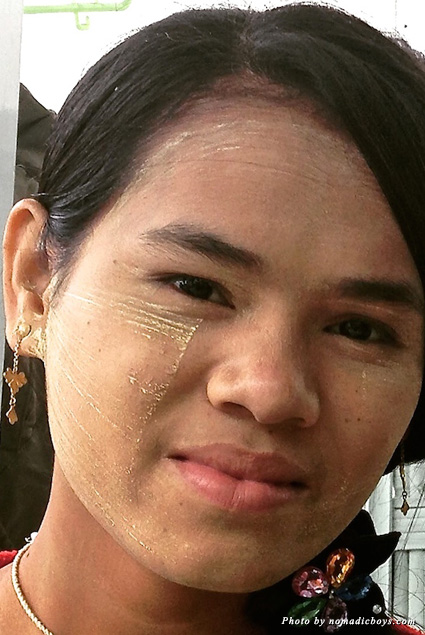 We embraced the thanaka, ditched our Boots facemask, and walked around proudly with our age-defying Burmese sun block decorations. 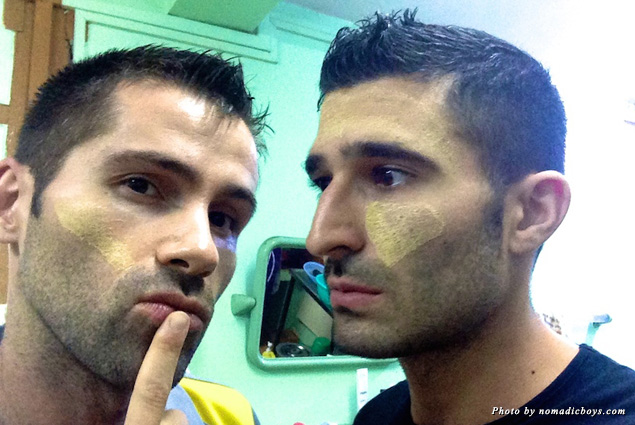 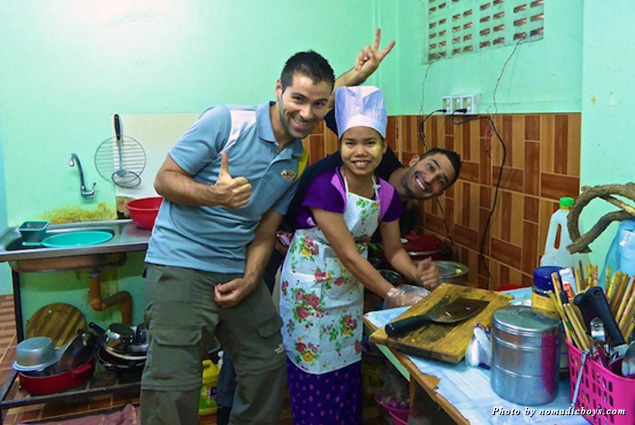 Burmese meals usually evolve around rice accompanied by many dishes of excitement. These dishes include a variety of different curries—both vegetarian and non—served with rice, a soup broth (usually lentils or other vegetable), a plate of quickly boiled raw vegetables, and a fish-based sauce in which to dip these raw vegetables. 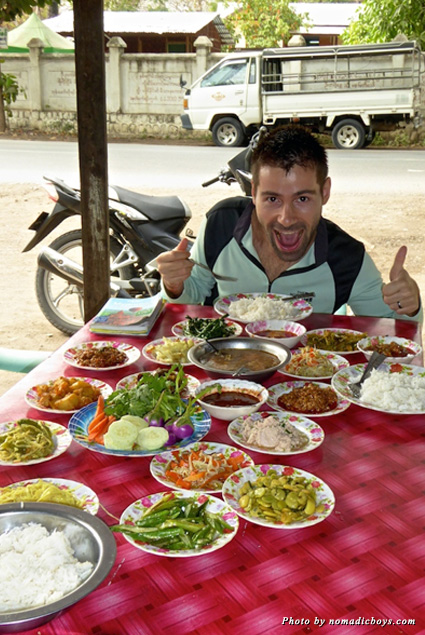 Our second destination was Bagan, a temple-rich city (there are more than 2,000 of them dating back to the 11th century) in the Mandalay Region. The bus from Mandalay to Bagan took around five hours and cost $11 per person. 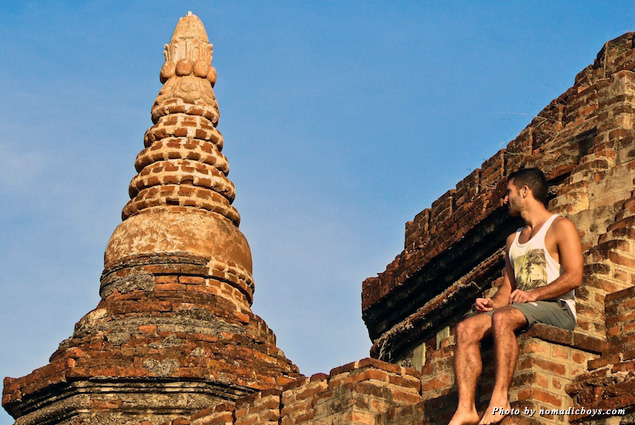 The budget town near the temples is called Nyaung U, and it is home to several excellent restaurants as well, such as one we enjoyed called Black Bamboo. We stayed in a basic but clean ensuite room at the Eden Motel in Nyaung U for $22 a night, including breakfast.

The best way to take in the temples in this vast space is to rent bicycles (around $2 a day each) and temple hop by bike. Our favourite moment with the temples was at sunrise (around 6/6:30 a.m.), when a layer of mist rose across the Bagan area, creating a mystical-like atmosphere. During this time, the hot air balloons set off, though at more than $300 per person a balloon ride was outside our budget.

Kalaw is a small town around five hours away from Bagan by bus and is a great base for treks to the surrounding countryside, particularly to Inle Lake in central Myanmar. 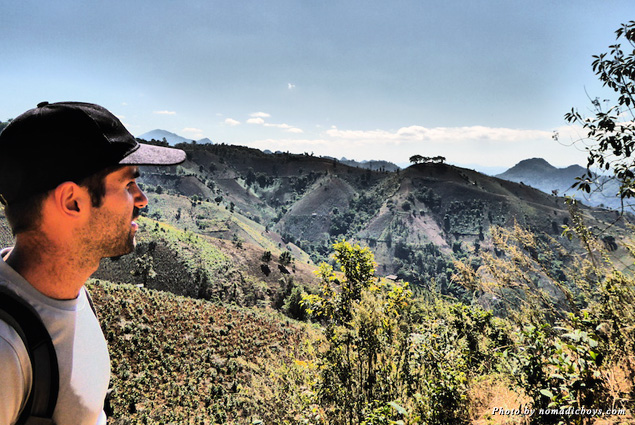 We stayed at the Golden Lily Guesthouse in Kalaw for one night, paying $14 for a basic ensuite room and a light breakfast. We used this time to speak to various tour agencies and eventually settled on one called Ever Smile.

The tour cost us $45 each for a three-day/two-nights tour, inclusive of accommodation, guide, and all meals. Not included was the $10 entrance fee to Inle Lake, the boat ride across Inle Lake ($22 for the boat), or tips. Our guide was a very sweet 20-year-old Burmese girl called Jewel who guided us to Inle Lake via the beautiful surrounding countryside with a stopover in her home village, where we stayed for one night. 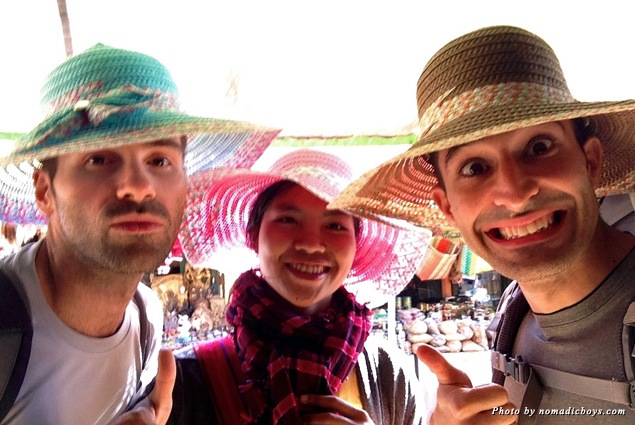 Inle Lake is fascinating because it is a town built on and around the lake. A boat ride through it will take you past the various floating markets and you will see the everyday activities of the locals, including fisherman or people transporting goods to the market.

The most startling moment of the trip was meeting the long-necked women from the Kayan tribe. These women wear coils around their necks from a young age; over the years, the weight of the brass pushes down on their collarbone and compresses their rib cage. This is a custom in their tribe to make them less appealing and therefore prevent men from neighbouring tribes from stealing them.

The long-necked women gather at Inle Lake to make a living by posing for photos for tourists. Unfortunately, we felt a bit awkward, like it was a zoo.

The nearby town at Inle Lake, where most backpackers base themselves, is Nyaung Shwe. We stayed at the Lady Princess Hotel for $25 a night (including breakfast), and our favourite restaurant in Nyaung Shwe was called Min Min.

Our final stop in Myanmar was the former capital city, Yangon, in the southern part of the country. We took an overnight bus from Nyaung Shwe, which took about 10 hours, and stayed at the excellent Three Seasons Hotel, paying $35 a night for an ensuite room and breakfast.

Why is it excellent? Upon leaving Yangon we left behind our camera (our baby!) in the taxi on our way to our flight to Bangkok. As a testament to how lovely the Burmese people are, we later found out the taxi driver returned our camera to the Three Seasons, so the staff arranged for one of their customers to take it to Bangkok to give to us!

Yangon is famous for the mother of all temples: the Shwedagon Pagoda, which is more than 2,500 years old.

Shwedagon Pagoda gets very quiet after sunset, and this is the best time to visit since the crowds die down a bit. The atmosphere was relaxed and peaceful with large numbers of monks and pilgrims praying. We tried to get up early for sunrise there, but kept sleeping through our alarm clocks and quickly gave up on this idea.

In Yangon, we also discovered quite an active gay scene, which was impressive for an Asian country where laws exist criminalising homosexual behaviour with up to 10 years imprisonment. Yangon has a monthly gay party called “FAB” and recently hosted its first LGBT film festival in November 2014. We met local gay boy named Beau Tun who taught us about gay life in Yangon.

Our overall impression of Myanmar was positive, mainly because of the people. Myanmar only recently opened up to the outside world and is changing a lot. As a result, we found the Burmese to be very curious and friendly when they encountered us foreigners. It’s incredibly endearing and you just can’t help but smile back to them (particularly when they reunite you with your lost camera!)

To see more of our time in Myanmar, watch our travel video diary.

All prices mentioned in this article are based on our January 2015 trip. They are subject to change.