The Wild Bride at Berkeley Rep 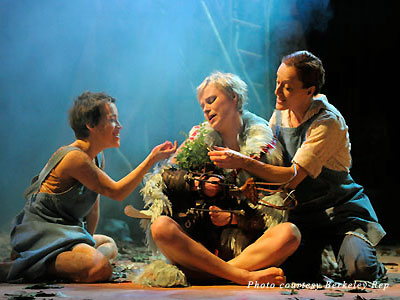 Arriving at the Berkeley Repertory Theatre at the beginning of the winter holiday season, The Wild Bride, from Kneehigh Theatre, UK, is a wild ride of bold interpretations, uninhibited physicality, and totally refreshing disregard for political correctness and the fragile feelings of American audiences raised on Disney classics.

“The Handless Maiden” fairy tale recorded and interpreted by the Brothers Grimm is adapted and directed by Emma Rice, and performed by an outstandingly talented ensemble of actors-singers-dancers-musicians.

Text and lyrics by Carl Grose, music by Stu Baker, and choreography by Etta Murfitt create a stage world of raw emotions, bloody deeds, and unexpectedly found strengths and virtues in the very few, yet larger-than-life characters that populate it. 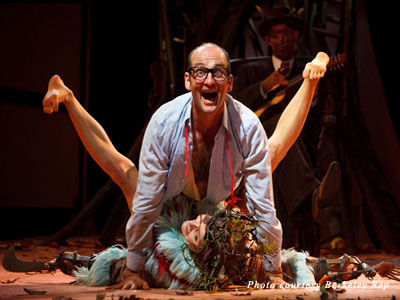 The leading role is divided between three actresses representing the three “lives” of the character, and conveying the endless human ability to adapt. The Girl is played by Audrey Brisson, The Wild by Patrycja Kujawska, and The Woman by Eva Magyar, all appearing on stage simultaneously, interacting and affirming each other’s messages in a vivid representation of the notions of change and aging.

The Father and The Prince are brilliantly played by the same actor (Stuart Goodwin), which justifiably refers to the very grim origins of the handless maiden legend. 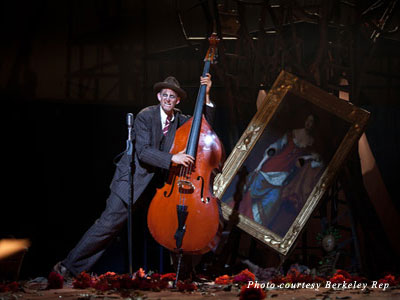 Stuart McLoughlin is perfectly conniving and charming as The Devil, and Ian Ross is great as The Musician.

Phantasmagorical scenic design was created by Bill Mitchell, expressive costume design by Myriddin Wannell, lighting design by Malcolm Rippeth, and sound design by Simon Baker, all of which contributed to the horrifying, poetic, and romantic overtones of the story.