“The Trip” 1: Raleigh to Winston-Salem 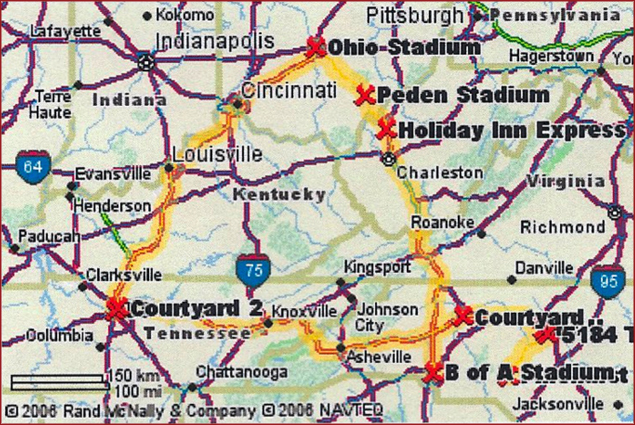 October 2006 would represent the first of what is now become known as The Trip. On Wednesday night (Thursday morning) I took a redeye to Chicago from LA and Ronnie – not yet living in LA – joined me for the last leg of the flight to Raleigh.

First stop was Ole Time BBQ, where we learned that North Carolina BBQ is all about the pork and their sauce is vinegar-based. There are also two distinct styles. In Eastern Carolina vinegar, salt, and pepper are the staples, and in Western Carolina they add a ketchup-type sauce to the Eastern style. Also, the western style really only uses the shoulder, not the whole hog. Ole Time was a strong introduction.

We then hit Tobacco Road for a round of golf. The course is totally tricked out. Our twosome went through three dozen balls. One hole is has such a big blind spot that you had to ring a bell when it was safe for the group behind you to hit. On the way back into town for our pre-game – we tried the regional staple Brunswick stew, historically made with any kind of meat you can find, squirrel, possum, etc. Not sure what was in ours but it was good. (For Paula Dean’s recipe click here.)

Upon arriving at the stadium, we parked and made the mistake of leaving our pre-printed Stadium map. One would think this is not a huge deal – in most stadiums it wouldn’t be. It is an aid that gives us an idea of where the good seats are for talking to ticket scalpers, but once you figure out what sections are in the middle of the stadium, you can figure out where you want to be for the game. Well, for Carter-Finley Stadium at North Carolina State University, it is an essential tool as for some illogical reason their sections are not in numbered order. This hampered our ability in the early stages of the ticket search to figure out where we wanted to be. However, we did make a transaction, and it set the tone for ticket purchases on subsequent trips.

We ended up on the 40-yard line for less than face value and saw some really good football. The Florida State Seminoles were in town. In addition to learning about some southern college football traditions, we were able to observe Bobby Bowden, the legendary coach. He had someone following him the entire time holding his headset. When he had a thought that he wanted to share with another coach, he would ask for the headset, yell something, then take it off, neither waiting for an answer nor realizing that there was an easier way to do it. The handwriting was on the wall then that Bobby B had lost it. He was separate from most of the team and coach and did not seem like he was involved.

This was not our first experience of football in the south – a year prior, we had been to Jacksonville for what has became known as “The World’s Largest Outdoor Cocktail Party,” the Florida/Georgia game – but this was our first on-campus experience. We have come to learn that each school has its own quirky cheers and traditions. At NC State, whenever the Wolfpack get a first down, the fans yell. Every school in the south loves when their band plays “Sweet Caroline” and screaming “Bah, Bah, Bah” after the words “Sweet Caroline” is a rite of passage for college students throughout the sunbelt.

The game was back and forth, with the speed of the players the most impressive. NC State won, and since I was assigned Florida State to cheer for, it was my first of many defeats on The Trip.

After the game, we drove to Winston-Salem to get a jump on our next day of driving. We were in the heart of ACC basketball country. I wanted to figure out a way to get into Cameron Indoor Arena for a look around or to check out the Dean Dome, but we still had 1,500 miles to cover and lots of BBQ to eat.

One day after departing Los Angeles, we were at our hotel, not knowing we had completed the first 24 hours of what was to become many memorable trips.