“The Trip” 5: Pittsburgh to Morgantown 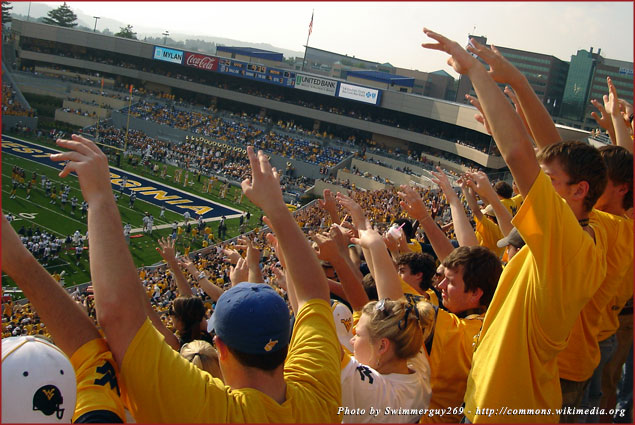 Day One: Los Angeles to Pittsburgh to Morgantown, WV to Charleston, WV

The fifth edition of “The Trip” started at 4am picking up Ronnie and Lee in the Los Angeles darkness. Bags were packed, stomachs were empty and the day was filled with promise. We took off for Chicago a few minutes late, but figured we would have plenty of time to make our connection. We ended up having to sprint thru O’Hare after waiting on the tarmac for 30 minutes due to traffic and arrived at our gate 10 minutes prior to take off. Inexplicably–and for the first time in 108-year history of air travel–our plane left early and without us on it.

Not to worry – this was The Trip and everything always works out on The Trip. We were re-booked on a different airline, arrived at Pittsburgh and headed to the car rental counter. Lee, being the polite guy he is, let a gentleman step in front of him. I smelled trouble. It wasn’t the Priceline print out in his hand that gave it away that he was not a frequent traveler, but I could feel it. I kept chanting the mantra about everything always working out on The Trip. And it did, 40 minutes later the guy in front of us finally got his compact for a subcompact price. It was all OK, because we were together and this was what we had talked about since the plane ride home from last year’s adventure.

What might appear to some to be a detour on the way to the football game, we consider a necessary pre-game meal. Barbecue is an essential part of the college football experience and this first stop was going to set the tone for the rest of The Trip’s meals. Pittsburgh BBQ Company did not disappoint. I would even say that you would be hard pressed to find better BBQ north of the Mason-Dixon Line. The location is in the middle of nowhere and there are no tables. You walk in and the smells just consume you. We bonded with the others standing and waiting with knowing smiles and ordered enough food for seven people. Forced to eat in the car–our home for the rest of the weekend–the ribs were outstanding; complemented perfectly by a sauce that was just the right amount of sweet with the right amount of kick. The chicken was just average, but I would put the cornbread up against any in the Deep South. Having “seasoned” the car for The Trip, we were on our way.

The drive to Morgantown is a beautiful drive through tree-lined I-79. We arrived at the West Virginia University to the sights and sounds of college football. The air was crisp, the stadium lights acted as a beacon and we found parking just a quarter mile from the stadium. The hunt for tickets began with some fans thinking that a Big East showdown between South Florida and West Virginia was something akin to an Alabama/Auburn game. Note to college football fans: Just because your game is on ESPN in primetime does not automatically mean that you are a top ten team and can scalp your tickets for anything you want. We settled in and found tickets on the 40 yard line for less than face value–we were back on track. I had a business contact that I had never met in person, who was a big West Virginia supporter. I sent a text to her with our section number. Of course, this being The Trip, she was sitting ten rows directly behind us. The game began and we were surprised by both the caliber of play and the passion of the West Virginia fans. There is tremendous pride and tradition in the football there and it shone brightly at this game. The stadium, while not an architectural wonder, provided great site lines and a fun atmosphere. After the game the home fans stayed in their seats until the final gun and then joined in singing John Denver’s “Country Roads.”

We joined my friend from ten rows back for the sing-along and then walked to her company’s post game tailgate. They were so welcoming, hospitable and appreciative that we flew across the country to come visit. I would definitely make a return trip to West Virginia. They showered us with gifts, including two dozen freshly made pepperoni rolls–a West Virginia staple. I think they are kind of an acquired taste. I will pass on them next time, but will always remember the good people of West Virginia. We drove 2 more hours to the Residence Inn Charleston. After a moment of worrying that there was no one on duty at the late hour to help us, the night clerk appeared as a welcome savior to these weary travelers. 20 hours after leaving our own homes, we had found a home for our 21 remaining pepperoni rolls. We settled in for a quick rest before the next leg of The Trip…

Top Skin-Showing Destinations Where You Can Dare to Go Bare Winter 2011 “The Trip” 5: Morgantown to Louisville