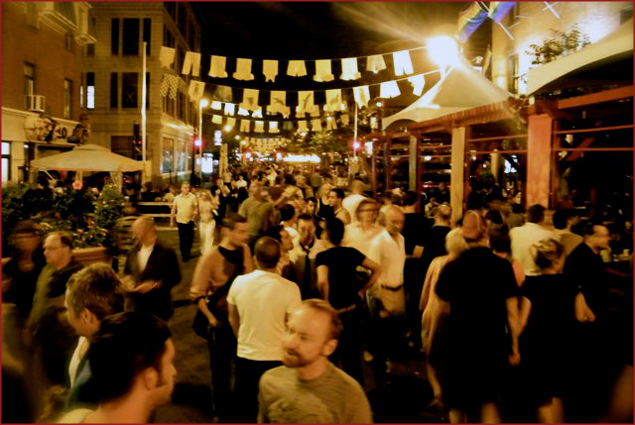 It is becoming a widely accepted axiom that gay people are tons of fun. As a gay man, I feel comfortable with this notion, and would also like to add that we’re creative, playful, strong and stylish! Oh yes, and we’re clearly humble. This being said, it is perfectly natural and normal to feel attracted to the gay community.

The Montreal Gay Village is a big tossed salad that features all sorts of characters: young and old, English and French, gay and straight. It is an inclusive space that celebrates sexual diversity, and we should not forget that “heterosexuality’ is part of sexual diversity.

For straight women, the village is an awesome place to party because it is safe – no drunken frat-boys violating your dance space. For straight men, it’s a place to step away from the machismo pressures of everyday life, to let your hair down and to relax a bit.

When you’re on your Montreal getaway, here’s how you can have a ridiculously awesome evening in three easy steps.

With a plethora of affordable dining choices, the village is a destination for many Montrealers (gay or straight) on a regular basis.

If it’s your first time in the gay village, I would recommend easing your way into the merriment with a dinner of Spanish tapas at Pica Pica. Located one block north of the main “drag” of the gay village, Pica Pica features a mixed crowd and plenty of mouthwatering menu items.

When you are ready for something a bit gayer, I recommend dinner at Le Saloon. The exuberant bistro features DJs spinning, and one of the most comprehensive martini lists in the city. Plus, if you nab a table at the window, you are in a prime location for people-watching.

Now you are getting warmed up. To keep the octane flowing, go to Cabaret Mado. As Montreal’s premiere destination for Drag Queens, Cabaret Mado will give you a true taste of flamboyant Quebec gay culture, while injecting you with energy to hit the dance floor. It’s the PERFECT stop for a bachelorette party, or if you happen to be a straight man who dreams of one day wearing pretty dresses. It’s cool. We don’t judge you.

If female impersonation doesn’t seduce your heterosexual soul, then I recommend releasing your inner “Idol” at Club Date. As the Gay Village’s premiere karaoke lounge, Club Date is a relaxed-atmosphere drinking hole that encourages sing-alongs. Plus the beer flow-ith cheaply!

If you’ve never danced at a gay bar, then you haven’t truly explored the potential of your hips. As a first-timer, I would recommend checking out Sky Bar, as there are multiple dance rooms to cater to various musical styles (Techno, Hip Hop, Latin, Top 40). The crowd tends to be mixed, so any heteros won’t feel out of place.

If you are ready to up the ante (and dance until the break of dawn), check out Stereo Nightclub. This ‘after hours’ nightclub has one of the best sound systems in all of Canada, which will appeal to any electronic music lover. And like Sky Bar, Stereo is a mixed crowd.

Montreal’s Gay Village is a fabulous choice for a night out in the city. In the summer months, the street is closed to traffic, making it the most pedestrian friendly neighborhood in Montreal. In the winter months, the bars and restaurants glow with an unseasonal warmness. So get out there, let yourself smile and have some fun!

For tips on how to how to behave in “gay situations,” check out a post I wrote for MindfulTourist.com – When Straight People Go Gay: 4 Tips on Being Respectful in Gayborhoods Across the World