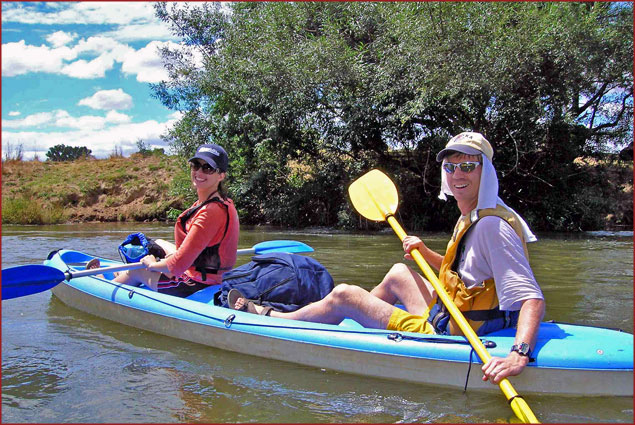 They call it the Mighty Murray. It’s the longest river in Australia, the border between New South Wales and Victoria, and the historic focal point of the Albury/Wodonga region.

I run along it every day but, ever since we moved here two months ago, I’ve been itching to get my feet wet in it. So I was glad when someone suggested we take a family canoe trip over the Christmas holidays; we settled for New Years Eve. Even in the morning, the sun was Australia-intense. I label it that because the sun here is so extreme it’s on a scale unheard of in the U.S. We dressed in the appropriate layers, following the Aussie “slip, slop, slap” custom (slip on a shirt, slop on some sunscreen, slap on a hat).

We packed a lunch and headed to Noreuil Park in downtown Albury where our rental company, Murray River Canoe Hire, was waiting. It was to be the best kind of canoe trip – one way, downstream – and they drove us to Albury Waterworks boat ramp to drop us off. The river was cool and quiet, despite the fact that it was a hot summer holiday. Brad and I got a kayak and were keen to put our limited kayaking experience to good use. It was good to be out with all the inlaws. Since we’d been living in the U.S., it was one of the first times we’d all been out together. Thus, it wasn’t long before paddling down the Murray turned into pirates on the Murray – a zealous quest to drench each other’s boats. 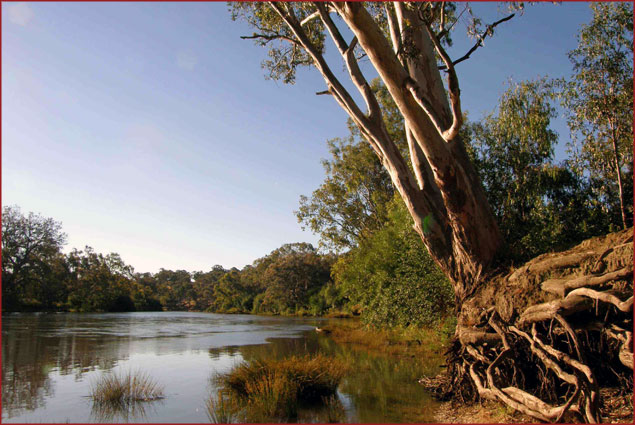 The river strolled through dry, hilly farmland and, after a bit, we docked for lunch on a muddy bank. I sat on a picnic table under a large white gum to reapply my sunscreen, looked up, and then I saw it. A kangaroo. The first since I’ve been back. Two large bounds and he was gone, disappeared over the dusty ridge. There was something in that moment that told me I was back. In fact, there was something Australian about the whole afternoon. Kayaking along a gum-lined river, and having a bit of sport while doing so. Spending the afternoon with my Southern Hemisphere family. We paddled peacefully downstream, enjoying the views of Albury’s bushland and the Murray’s wide bends. There is no better way to get to know an area’s landscape than to get into it. By the time we reached our destination, back at the park 17kms later, we had more company: swimmers, boaters, floaters, and children careening off a rope swing. It was idyllic. It would have been the perfect summer day, but today was New Years Eve, which made it the perfect last day of 2009. And, with thoughts of white-barked gums, wide rivers, and kangaroos dancing in my head, I was looking forward to 2010.

Canoes are available for full or half day rentals from Murray River Canoe Hire, 02 6041 1822, thecanoeguy @ hotmail.com. 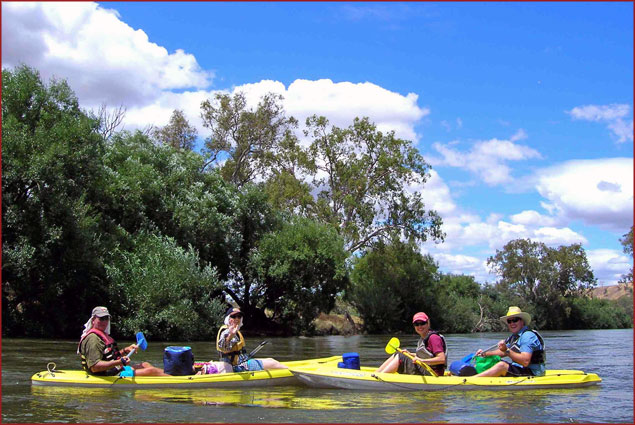