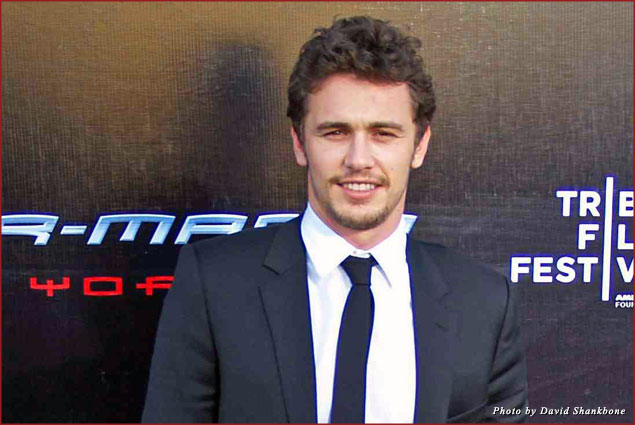 There are some artists that make you wonder what it’s like to be in their head after seeing a film, reading a book, or viewing an art exhibit. After viewing James Franco’s new exhibit “The Dangerous Book Four Boys” I am adding Franco to this list.

Housed at the Clocktower Gallery, Franco’s Dangerous Book Four Boys exhibit is stark, a bit disturbing and most definitely leaves you thinking long after exiting the building. A composition of various art mediums–photo, video, performance–the exhibit challenges all senses. As obvious by the title, this is exhibit is about boys and destruction.

A plastic playhouse, melted as if left in the hot, blazing sun too long, greets visitors at the entrance into the gallery, and it very much sets the tone for the pieces that follow, even if it all starts out so innocently. A video of a baby boy’s birthday party plays on one gallery wall. On the adjacent wall, a running video of a teen chopping wood in a very barren landscape. 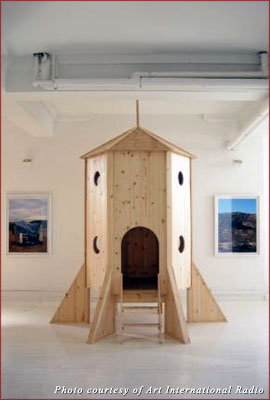 The focal point of this space, though, is the three wood structures displayed in this space. In one, visitors enter a wooden house, sit on benches and watch a grainy, jerking video of a boy wrangling with what looks to be a small calf. A seemingly normal farm task of roping takes a drastic turn for the worse. A second structure is enclosed, forcing the viewers to look through a window to see the video inside–a video of flames, engulfing the house. The most whimsical structure, though, is a wooden, rocket-shaped playhouse that takes great impulse control to not crawl inside.

The Clocktower Gallery is housed in a city-owned building in Tribeca and is one of the buildings in New York for which an airport security-type process must be endured for entrance. If you visit, remember your I.D. Once inside the building, it takes some wandering around to find the gallery, as the elevator only goes to the 12th floor. Small signs direct visitors to the stairs to be used, but if these signs are missed, it’s possible to end up in a maintenance office.

Operated by the non-profit AIR, Art International Radio, this is the second exhibition since the Gallery’s 2009 opening. Founded by former director of P.S. 1 Contemporary Art Center, Alanna Heiss, AIR is envisioned as a continuation and re-imagining of Art Radio WPS1.org, the Internet radio station operated by P.S.1. The result is an Internet radio station, free online cultural archive and media arts center, producing over 500 new radio shows annually. While the majority of Franco’s exhibit is housed in the art gallery towards the back of AIR, Art International Radio’s space, other elements of the show are tucked away in corners and appear in some offices off the halls–a sort of artistic fun house.

Recognizable to many as being a member of the group of actors that have come up through Judd Apatow franchises, Franco is proving to be more than just another pretty face.