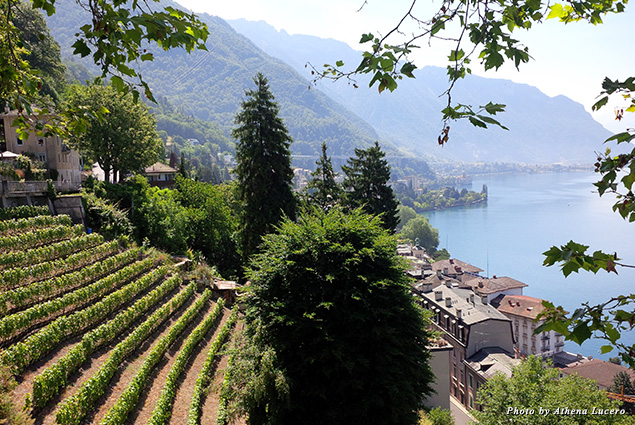 Some places simply inspire. Montreux in French-speaking Switzerland is one of them. If only we could wake up to it every day.

Some of the most prolific before us did, from composers and musicians to writers, poets, actors, and politicians. Through the centuries, on the banks of Lake Geneva, they sipped their coffee at sunrise, communed at the weekly marketplace, drank wine from the ancient vineyards of Lavaux, and contemplated. The glistening lake and grandeur of the Alps provided the muse.

This romantic region was the setting for the famous works of Swiss philosopher and writer Jean-Jacques Rousseau (“La Nouvelle Heloise,” 1761) and Lord Byron (“Prisoner of Chillon,” 1816). Their captivating descriptions of the landscapes around Lake Geneva and the Chateau de Chillon (the castle dates back to the Romans), lured writers from around Europe who “wanted to come to Montreux at any cost”—long before the first hotel was ever built.

Who wouldn’t be moved by all of this, I daydreamed as my guide Clare Keller and I walked the lakeside in Montreux, which had continued attracting settlers and evolved into a famous resort town of 26,000 inhabitants where the water still glistens and the Alps are as grand as ever. Together with the town of Vevey and the Lavaux winemaking region to the east, they make up what has become the Montreux Riviera on the upper crescent of Lake Geneva, one of Europe’s largest lakes. 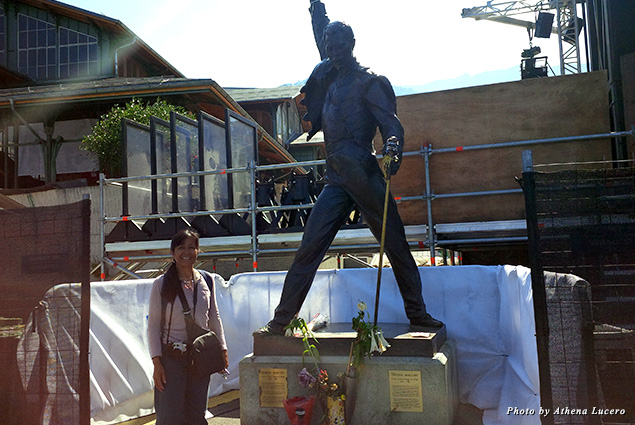 The Place du Marche, the old public market place, is a vestige from those earlier times. In front of the historic covered market Keller pointed to a bigger than life bronze figure facing the lake. “This is a statue of Freddie Mercury, the lead singer of the British rock band Queen…. He lived in Montreux and the band recorded its music here.” The singer, songwriter, musician, and sensational performer died in 1991.

Even in contemporary times the region holds a mystique.

Queen, considered one of the most successful bands in music history, recorded tracks from its most popular albums at the Mountain Studio inside the Casino Barriere from 1978 to 1995, including Freddie’s last vocals and Queen’s last album, “Made in Heaven.” Lake Geneva and Freddie’s statue are on the cover.

Queen’s legacy in Montreux is now remembered at the Queen Studio Experience, which opened in December 2013. Fans, or the curious, have the chance to enjoy rare insight into the band’s music-making history through memorabilia, photographs, handwritten song lyrics, footage, costumes, and instruments—and even create custom mixes of Queen tracks (admission is free). And come the first weekend each September, Freddie Mercury Memorial Day (proclaimed in 2003) is celebrated with festivities and Queen’s music.

Tarps and temporary fencing around us did not make for the best photo ops, but the town was busy getting ready for its renowned Jazz Festival, a two-week-long event that has taken place each July since 1967 (music is big in Montreux). Like a pilgrimage, music lovers from around the world come religiously to the festival where past guests have tapped to the rhythms of Miles Davis, Bob Dylan, Sting, and Prince. July 3-18 marks this year’s festival.

The vibe on Montreux’s lakefront is urban with modern buildings, such as my lodging, the high-rise Eurotel Riviera, built on the quay overlooking the lake. The modern Convention Center is the venue for the Jazz Festival, and below ground is a subterranean mall where the locals shop and great bargains are found at clothing, shoe, electronic, and gift stores as well as at Migros supermarket, where I spotted fantastic prices on outstanding local wines and my favorite Swiss chocolates. “Visitors worry that it is very expensive here,” said Keller, “…but you just need to know where to go!” 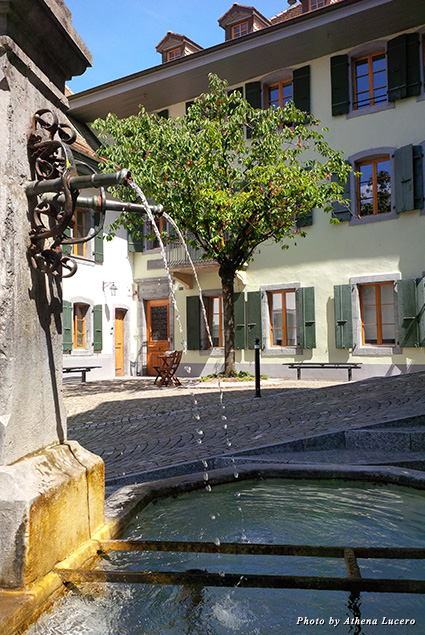 Montreux has a fascinating layered geography and a view from a boat cruise on the lake captures that perspective. A “level” above the lakeside—accessed by escalators or elevators—is the rail line and train station, hotels, restaurants and shopping; the long cobblestoned Rue du Marche leads uphill to Vielle Ville, the Old Town, and a busy motorway stretches overhead. 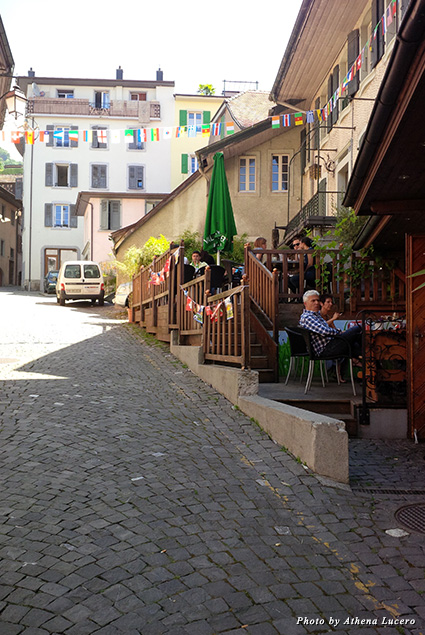 We roamed the Old Town’s ancient streets and tranquil courtyards where few tourists tend to wander. At outdoor cafés locals were savoring their morning coffees, others walked the streets going about their business, and centuries-old water fountains spewed spring water fresh enough to drink straight from the spout. An ancient stone house built in the early 1600s houses the Montreux Museum. Among its artifacts and documents are photos of the town’s famous residents.

Keller led me to the top of the hill and the Church of St. Vincent (the patron saint of vintners) to take in a picture-perfect landscape of sloping vineyards and a placid Lake Geneva.

And with gorgeous summer weather we couldn’t resist an invigorating afternoon of bicycling. We boarded the train to Vevey to rent e-bikes (electric bikes) so we wouldn’t break a sweat navigating the town’s hilly streets.

The train pulled into Vevey station located across from the market square and the lake. Another lovely resort town with a population of 19,000 and home to Nestlé headquarters (milk chocolate was discovered here), shops and cafés were abuzz while window displays of chocolatieres and butcher shops tantalized our taste buds. 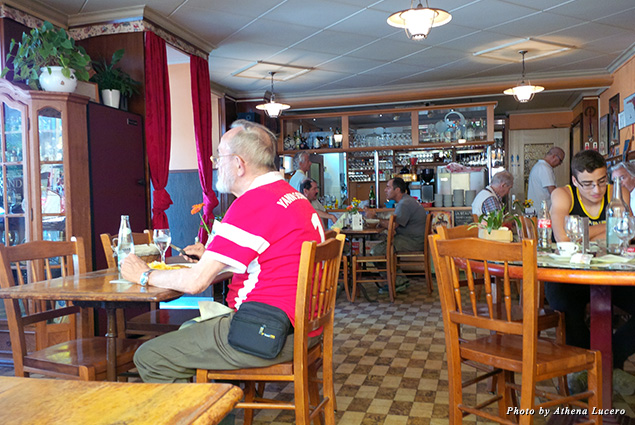 But before embarking on our “cardio” adventure, it was only apropos to stop for lunch at Auberge de la Clef, where in 1730 Jean-Jacques Rousseau stayed and dined (Vevey was the setting for his epistolary novel). The same table was saved for him; today a memorial sign honors where he sat and the restaurant is a beloved local dining spot. I savored every morsel of my favorite Swiss meal, filet of perch, small fish from the waters of Lake Geneva sautéed in butter with lemon. Future diners, if you’re looking for the muse, you must request “Rousseau’s table.” 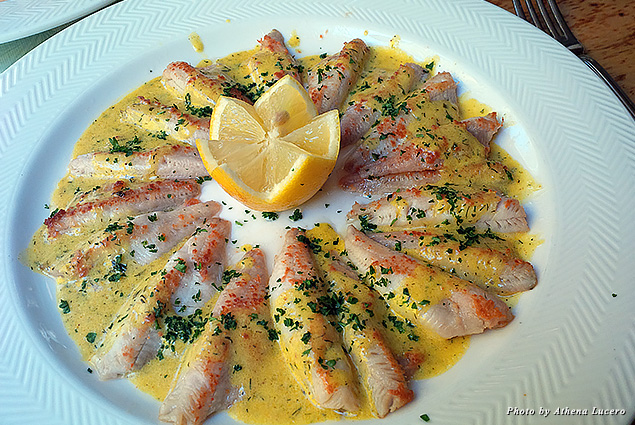 Around the block we got fitted for our bikes, donned our helmets, and set off to randomly follow the route of “The Poets’ Ramble,” a beautifully written and informative collection remembering the region’s celebrated guests of the past—through benches placed around the city—who at different times in history just passed through or resided here, bringing fame to Lake Geneva’s shores. They include Ernest Hemingway, Victor Hugo, Charlie Chaplin, Graham Greene, Elisabeth Vigee-Lebrun (French painter), the King of Siam, Leo Tolstoy, Francis Scott Fitzgerald, Igor Stravinsky, and Elizabeth of Habsburg (Princess of Wittelsbach, Empress of Austria, and Queen of Hungary)—to name just 10.

Wherever the benches are found, recordings of the writer—a quote, a verse, an excerpt from a book, or simply their words describing a favorite respite—will whisk the listener off, if even for a moment, to a poignant place in time. 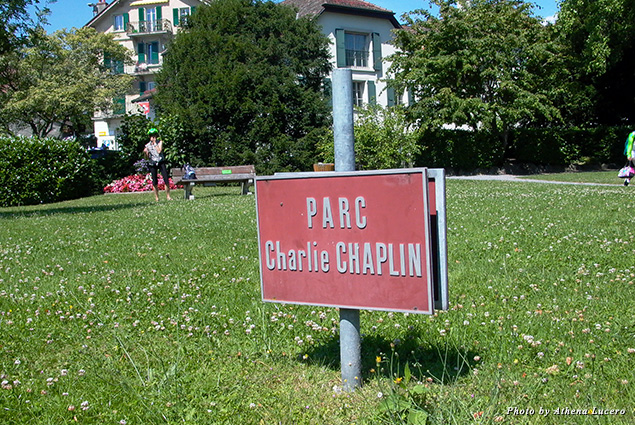 At Parc Charlie Chaplin we located Chaplin’s bench. Then Keller pulled out her smartphone and opened the very cool app, “On the tracks of our famous guests,” so we could hear an audio storytelling about Chaplin (actor, screenwriter, and producer) who lived 25 years in Corsier-Vevey until his death in 1977. Chaplin was a much celebrated and embraced personality of Vevey; a bronze statue of him, including his cane, stands at the lakeside and a museum dedicated to his life and times in Vevey is expected to open in spring 2016. 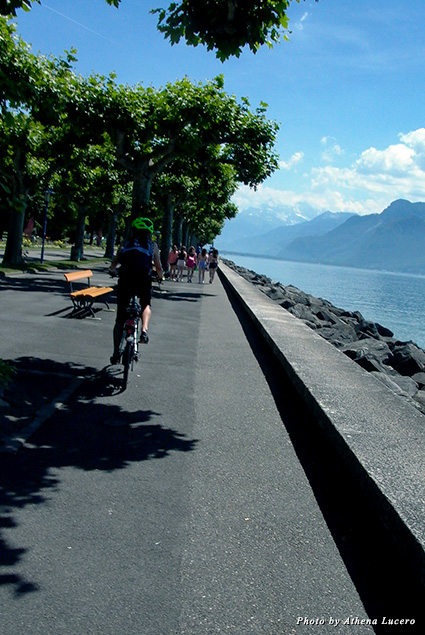 Our e-biking excursion was not completely without physical effort as we pedaled along flat terrain. But when the going got tough, it was heaven to click on the motor that “pulled” us uphill—and intimidating inclines were no longer. 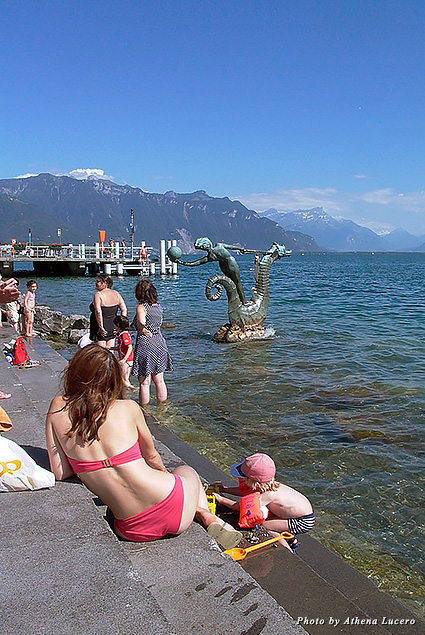 We rolled around town follow-the-leader style, stopping at-will along the way to relax with sun worshippers at the lakeside and to admire early 20th century sculptor Edouard-Marcel Sandoz’s triptych “Les Hippocampes,” a mystical trio of bronze seahorses ridden by a young woman.

Like a scavenger hunt, we eventually found French novelist Victor Hugo’s bench on the Esplanade de-St. Martin, which he had sketched in a letter to a friend when he described Vevey’s “cleanliness and mild climate.” His greatest works include “Les Miserables” and “The Hunchback of Notre-Dame.”

But our real workout—and reward—was finding British actor James Mason’s bench when we had to climb to the top of a steep flight of steps overlooking peaceful vineyards and Lake Geneva. Nicknamed the “gentleman of cinema,” his best remembered films include “Orient Express,” “Madame Bovary,” and “Frankenstein.”

The terraced vineyards of Lavaux stretch more than 2,000 acres across the hills over Lake Geneva (with six main appellations) and were designated a UNESCO World Heritage Site in 2007. They have flourished in the region since the 12th century, when Cistercian monks began planting grapevines to make wine. Wonderful Mediterranean climate here is perfect for winegrowing, and the townspeople have taken pride in the three suns of Lake Geneva: by day it shines from above, it reflects off the lake, and come evening the stone walls have captured the sun’s heat to keep the vines warm at night.

And while winemaking was taking root in the area, another industry—hospitality—was taking shape during the 19th century to accommodate the flow of royal and wealthy guests who came to enjoy the landscape and healthy mountain air of the Alps. In 1893, the world’s first hotel school, Ecole Hôtelière de Lausanne, was established on Lake Geneva. And, in 1962, the first university-level hotel school opened: Glion Institute of Higher Education (Glion is a village in the heights of Montreux). True to Switzerland’s hallmark of accommodation and conviviality they rank as the top hotel management schools in the world.

Montreux’s historic hotels were built on the hillside with commanding views of the lake. Two grand dames—the Victoria (originally a smaller hotel built in 1869 and expanded through the centuries) and the recently renovated Grand Suisse Majestic Hotel (built in 1870)—are reminders of La Belle Epoque and still welcome guests.

Indeed, Jean-Jacque Rousseau and Lord Byron were the first to immortalize Montreux, Vevey, and Lake Geneva in their works. But others have followed since: Freddie Mercury, Prince, Igor Stravinsky, and preeminent American food writer M.F.K. Fisher, who wrote of Vevey in her memoirs when she lived there during the late 1930s. The day I departed Switzerland, June 22, was the same day Fisher died in 1992 at the age of 83.