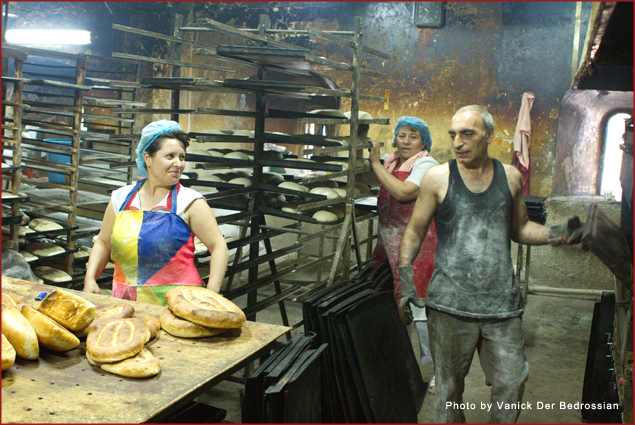 I recently arrived in Armenia’s capital, Yerevan. It is a beautiful city almost entirely built of red and black tuff, a volcanic rock found all over Armenia. Yerevan boasts handsome city squares replete with monuments commemorating great writers, musicians, generals and artists. I am staying in an apartment near the central “Republic Square”, where Lenin’s imposing statue once stood. His statue is now gone, and a growing number of commercial banks are opening offices in old Soviet government buildings, offering Armenians credit cards, bank accounts and ATM machines. 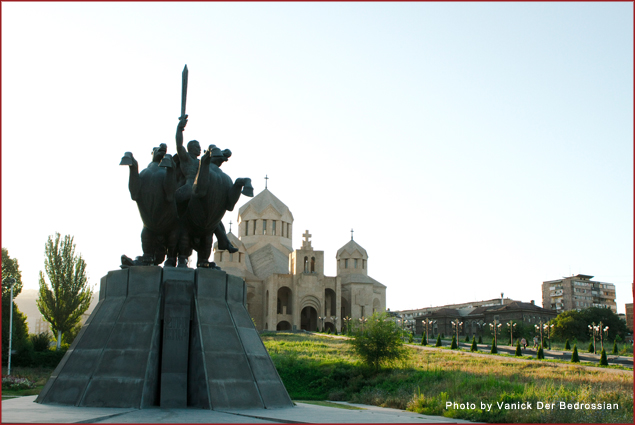 The city is hot and crowded. Everywhere I turn I see babies. My flight here was packed to the brim with married Armenian couples and their adorable, babbling two-legged carry-ons. Moms walk like queens here. They stroll leisurely through Yerevan’s avenues with their heads high, gleefully flaunting their pride and joy to passersby. In the center of town cafés boast “new and improved” play areas for kids, equipped with swirling slides, monkey bars, and all. Fathers are proud, too. They trail a short distance behind, chain-smoking extra-thin cigarettes with Marlon Brando-esque intent and hard-boiled severity. Being the head of the household, it seems, does not allow for much smiling. Only stone-cold gazes and furrowed eyebrows will do. 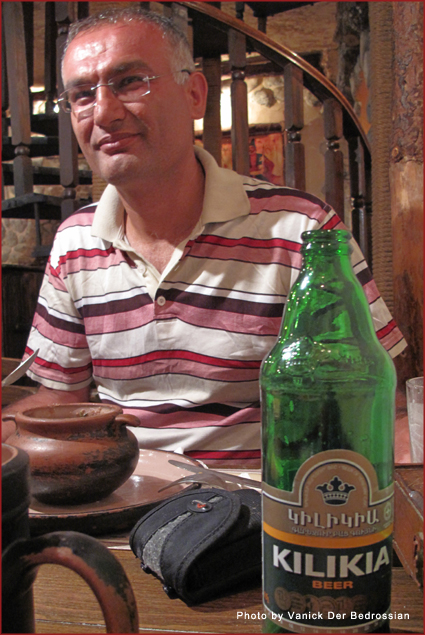 I’m here an Armenia working with Kiva to increase micro-finance in Armenia. By partnering with local micro-credit organizations, we are helping Armenian farmers and small business owners to get much needed funds to grow their businesses. In my short time here I have made friends with an affable bread baker named Levon, and cooked a traditional Armenian breakfast of minced cow liver with sautéed onions, tomatoes, and freshly chopped parsley, paired with shots of a homemade plum eau-de-vie. The bakery is located inside of Yerevan’s closed market, called “pak shuka.” The closed market is a must-see attraction in Yerevan and is located on Mashtots street, near Amiryan Street in the center of town. In this late-summer heat I am drinking more beer than water and eating more ice cream than cheese. I am dead-set on finding some locals to play soccer with. Well, at least Kilikia, Armenia’s larger beer maker sponsors the Olympic soccer team. It’s a good first step! 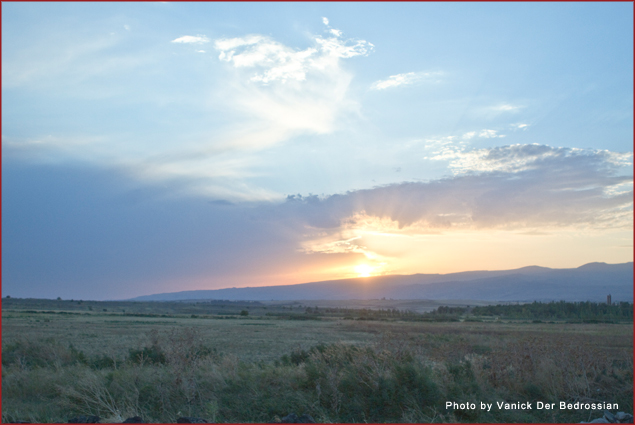 A few days ago my uncle Haig invited me to his house, which is located in Yeghvard (pronounced YER-VART), a village just 20 kilometers north of Yerevan, Armenia’s capital city. The road out of the city passes through run-down apartment blocks and gaudy casinos operated by what seems to be the Russian mafia. But soon the view widens to reveal the countryside: vast fields of golden wheat, mounds of freshly stacked hay, bushes of burgeoning boysenberries, and gently rolling hills in the distance. Driving ahead, a group of Yezidi herders calmly usher their sheep off to the side of the road. The Yezidi living in Armenia are ethnically Kurdish, but came here in to flee Turkish persecution during the First World War. They follow a unique religious belief that is part Kurdish and part Islamic Sufi. They are known in Armenia as “sun worshipers” because they pray daily at sunrise and sunset. 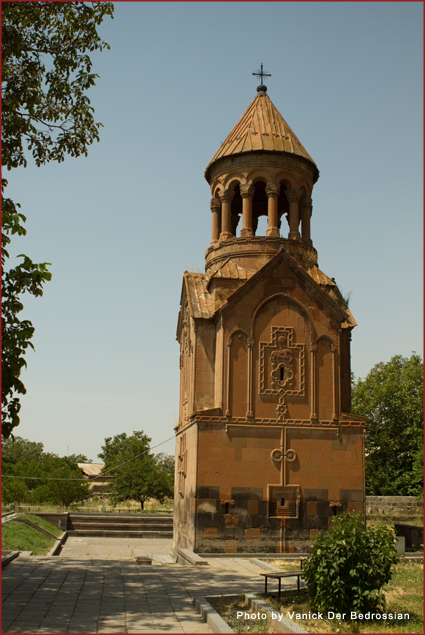 We soon arrive in Yeghvard. It is a charming, sleepy community at the base of Mount Ara. The mountain’s barren, veiny bluffs offer a stunning backdrop to the town. Narrow, winding streets wiggle about in all directions like passageways leading into an ancient labyrinth. Our path eventually leads us to an old church, which lies in the town’s center. My uncle explains that the church dates back to 1301, and was dedicated to the Virgin Mary. I cannot help but notice striking carvings on the church’s brown stone façades: a leopard killing an ibex, an eagle gripping a baby lamb with its claws, a lion, a bull. While I have no expertise in Armenian Church symbolism, these carvings seem oddly pagan to me. 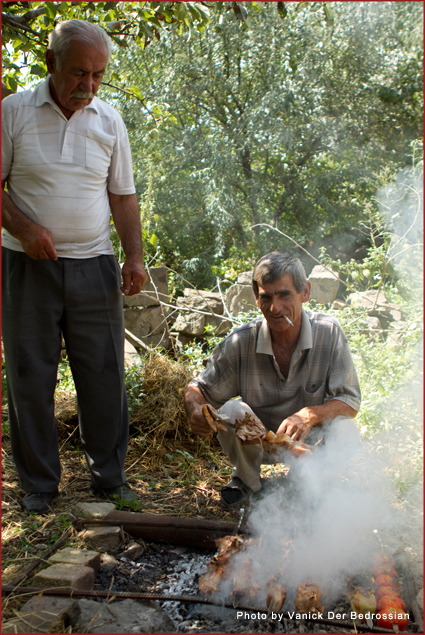 Soon our stomachs begin to growl and we make our way to my uncle’s house to prepare a traditional Armenian barbecue called “Khrorovats.” Valod and Meshrop, two of Haig’s friends, join us and help get things ready. They use small branches of apricot wood to make the fire; according to them it is the best wood for barbecuing. The fire pit crackles and comes to life. They expertly skewer tender pork chops along with ripe tomatoes and whole onions on long steel skewers. The air is soon imbued with the heavenly smells of grilled onions. I watch gleefully as plump droplets of pork fat dive into the smoldering embers below, sending a flurry of ashes up into the sky…

A while later the pork chops are golden brown, and it is time to eat. A table is set in the garden, under the pleasant shade of an old walnut-tree. Our shot glasses are filled to the brim with Valod’s home-distilled Ori made from Haig’s garden plums. We toast to a life well-lived and tipsily chomp into tender morsels of pork, juicy tomatoes and charred onions. Between bites I stop for a moment and soak in it all in: life, it seems, doesn’t get much better than this. 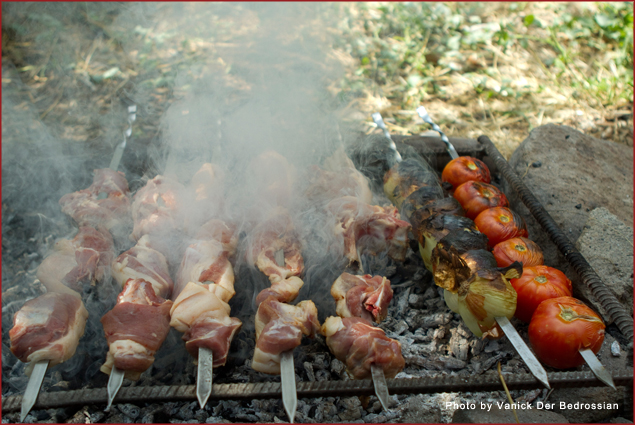 After that wonderful weekend in Yervard I felt inspired to leave Yerevan again and see more of Armenia’s countryside. My friend Sveta and I set off for Goris, a small town located in Armenia’s south-eastern region. Its main street boasts a small café, a wood-fired lavash bakery, a church (of course…), giggling kids and old men playing backgammon. Upon our arrival the town is shrouded in a dense evening fog, which soon turns to a light mist that hangs in the air. A delicate aroma of ripe fruit hovers. It is the smell of white muscat grapes grown nearby. The soil here is fertile, and we’ve arrived during the grape harvest. Farmers set up small stands on the roads around Goris, selling clusters of plump grapes, heaps of colorful vegetables and soda bottles filled with their homemade wine. 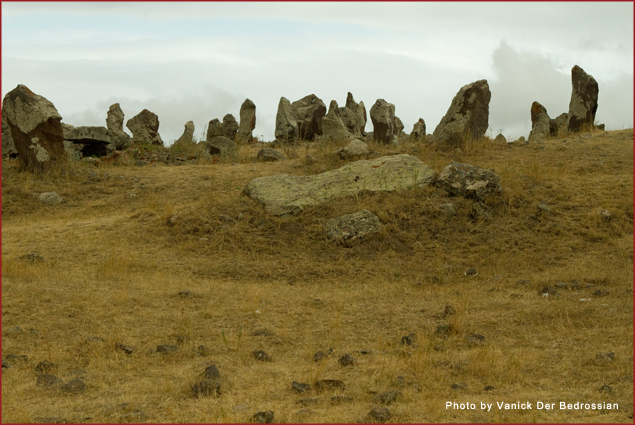 The next morning we set out for a site called “Karahundj,” translating to “rock-breathe.” Our driver’s old Lada grumbles its way through the small dirt roads, taking us deep into the countryside south of Goris. We soon arrive at a hilltop, kicking up clouds of dust as we skid to a halt. As the haze dissipates, a majestic scenery emerges: a breathtaking collection of huge basalt rocks-over 200 in total, all elaborately arranged in a clearing just ahead.

The rocks are covered with faded shades of asparagus-green, white, and sepia-colored moss. The site dates back to 2,000BC and houses remains of ancient tombs. Researchers have not yet figured out exactly how or why these stones, some weighing over 10 tons, were brought here. 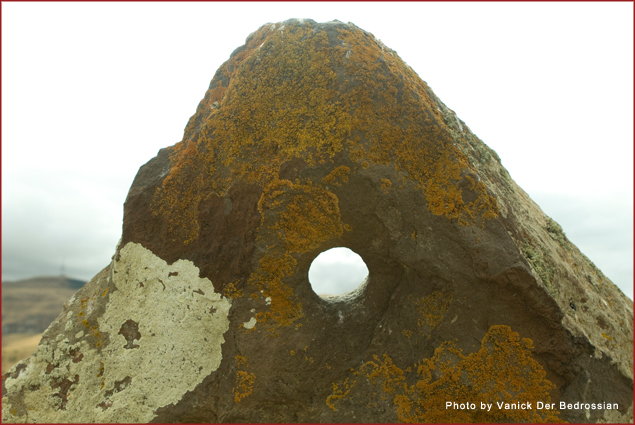 Some of the larger rocks have holes near their top edges. They were most likely used for astronomical observations because the openings act as viewfinders that help locate constellations. It is believed that one of the largest rocks at the site aligns with the constellation Orion on August 11th of every year, marking the first day of the grape harvest here.

Just as I am about to leave, two shepherds emerge with their herd of braying sheep. Their names are Samvel and Vartan, and they obligingly pose for a photo. I imagine their ancestors trekking through these lands for thousands of years, travelling by these same stones on their journeys past. Suddenly the gentle breeze turns into a fierce gust. The wind sweeps through the golden valleys around us, whisking the field of brush into a symphony of hushed whispers. I close my eyes, take a deep breath, and let the smell of damp hay overwhelm my senses. 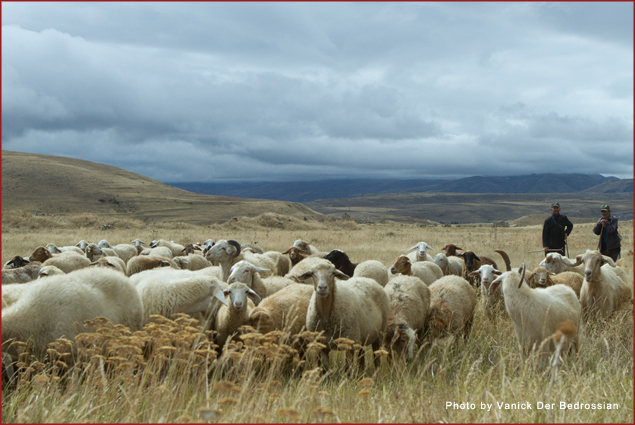 Armenia is an ancient land that I only knew about through books and stories until now. I did not know what I would find by coming here. But now I do: I have found a land rich with delicious foods and genuine people. I have found a sense of belonging on a level never felt before. And I feel, for the very first time in my life, connected with the lives of my great-grandparents and ancestors.

Click here to learn more about Karahundj. Karahundj is located near the Southeastern town of Sissian, about 3 hours away from Yerevan.