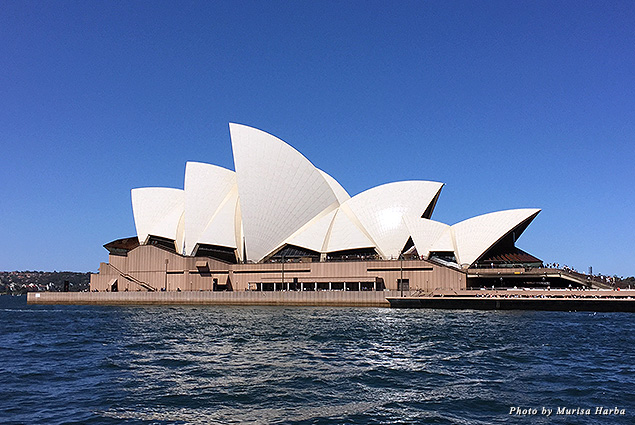 My wife and I headed to Sydney to transform ourselves—to become people we are not. To wander the streets, climb the bridges, and be impulsive. We were there to become the urban explorers we’ve always talked about being (but could never quite become) back home in Los Angeles.

Our flight was long, but as the approach to Sydney began the stunning Australian coastline slid into view, washing away our fatigue. Wind-carved cliffs rose from the frothing Pacific like a miniature Big Sur. Home after home of urban sprawl built into Sydney’s northern suburbs greeted us before we spotted the sites the world knows so well: the Opera House, Darling Harbour, and Bondi Beach.

When we landed in Sydney the feeling for us was different than anywhere else in the world; it felt like home. This is for a very good reason: It used to be our home. Back then, the US dollar was twice as strong and the local Aussie wine was still finding its legs. Aside from that, Sydney seemed timeless; the only thing that had changed was I was 12 years older, no longer a young man on his first trip abroad.

We cleared customs and hopped into a taxi that sped us downtown to The Intercontinental, our home for the next four nights. Check-in took an extra minute as the front desk searched for a complimentary upgrade. “Will a Harbour View room suffice, Mr. Durrant?”

Situated above Circular Quay, our room at “The Intercont” afforded us sweeping views of every major Sydney landmark, from the hustle of the ferries in the Quay beneath us to the Harbour Bridge and Luna Park’s gaping clown mouth to our west. The view captured the sweeping panorama of this large and diverse city. But for two self-declared urban adventurers, we wanted to be in it, not above it. So we weighed our options, made sleep our last priority, and headed to the first stop every urban adventurer in Sydney must make: The Rocks.

We ventured deep into the heart of Sydney’s oldest and toniest neighborhood. Located between Circular Quay and Darling Harbour, the Rocks was once Sydney’s slum, dominated by a local gang called the Rocks Push. My wife and I assumed the role and fancied ourselves Rocks Push members, ordering shots of whisky and scowling at passers-by, as we passed the Fortune Of War, a nearly 200-year-old pub on George Street. But it was still too early for liquor, so we slid into an outdoor table at French-style café La Renaissance, craving eggs over-easy and carbs. Our breakfast did not disappoint. My Americano (a “long black” to the locals) paired perfectly with the gluten- and dairy-filled cinnamon crumb cake I was pretty sure is illegal in health-conscious Los Angeles. My wife’s eggs and avocados on toast were washed down by a heart-shaped cappuccino that looked too perfect to drink.

Our bill arrived and sticker shock set in. We remembered a Sydney where the money looked and spent like a game of Monopoly. The confusion faded as our server reminded us tax and gratuity are included in the price. Compared to back home, this was a full 30-percent discount, bringing Sydney’s prices on par with New York or San Francisco—in other words, expensive, but manageable.

We meandered next to the Rocks Markets, a weekend-only collection of local artisans who fill the normally car-congested streets. My wife browsed Christmas ornaments while I chatted up a local photographer whose stash of historic prints would look perfect on the wall of my office. We left with a promise to return the next weekend.

Our energy levels picked up as we made our way on foot to Darling Harbour—still the thriving, cluttered tourist trap it was when it re-opened in advance of the Sydney Olympics in 2000. The syncopated music of a salsa festival filled the air. Nearby, restaurants and bars were packed with visitors soaking in the mid-day sun. For old time’s sake, we ordered drinks at Cohibar and sat outside to watch the boat traffic. For the price of a drink we could not beat the view. 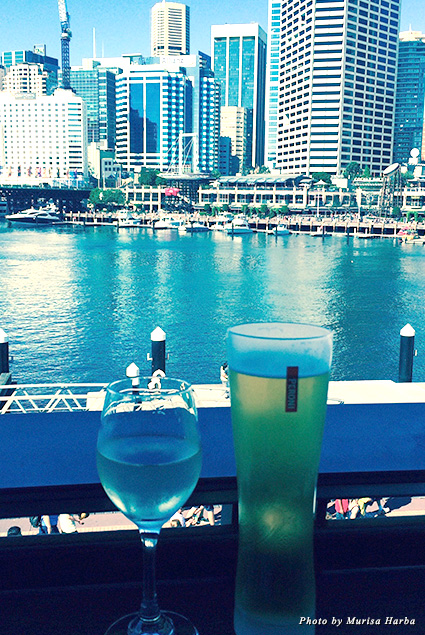 Finally beginning to tire, we hopped into a taxi and headed to the Opera House. On weekends, outdoor cafés line the perimeter of Sydney’s most recognizable landmark to create a buzzy, locals-only atmosphere. Everyone hip and trendy in Sydney was here, pulling back vodka tonics and espressos to recover from the night before. We followed suit, ordering another round of caffeine and settling in to people watch. An hour later, the sun began to dip into the horizon and the salt air chilled our backs as we passed through Circular Quay once more. We made impromptu dinner reservations at an authentic little Italian place, Caminetto, and somehow lasted until 10 o’clock that night before turning in, still dreaming of the restaurant’s osso bucco.

The next morning, we rose early enough to witness daily life unfold from the Intercont’s 30th-floor gym. We ate a quick breakfast at the hotel and pulled out our city map to plot day two. Feeling more courageous, we circled the Sydney to Manly Ferry. The weather was perfect as we dropped into Circular Quay and purchased our tickets for one of the world’s most beautiful and inexpensive tourist adventures. Departing twice an hour, the ferry cuts through Sydney Harbour with perfect Opera House photo ops. On the weekend, sailboats of every size dance along the waves nearby, their skippers waving merrily when seas are calm, focused when whitecaps emerge. 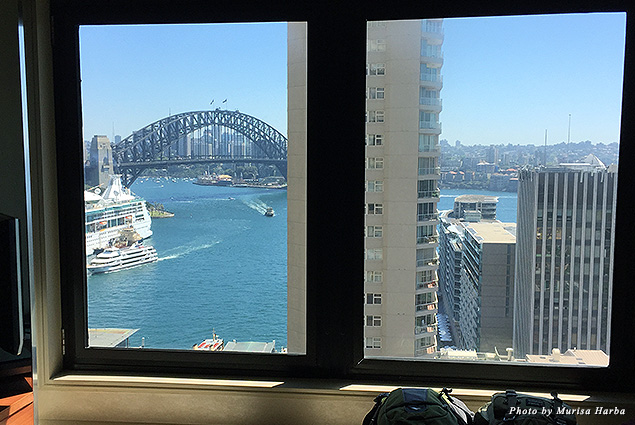 We passed lighthouses so small they seemed like miniatures guarding Sydney’s coastal fringes. This was the perfect beach day, and bathers and surfers waved to us from shore. Eventually we reached Manly, one of Sydney’s northern suburbs. Hundreds of Sydneysiders and tourists waited to take our ferry back to Circular Quay as we hopped off in search of an open table at one of Manly’s outdoor, sun-drenched cafés. Nearby, waves crashed into the densely populated Manly Beach. The surf was rough and we pretended to stand guard, protecting those brave enough to get into the freezing spring water. 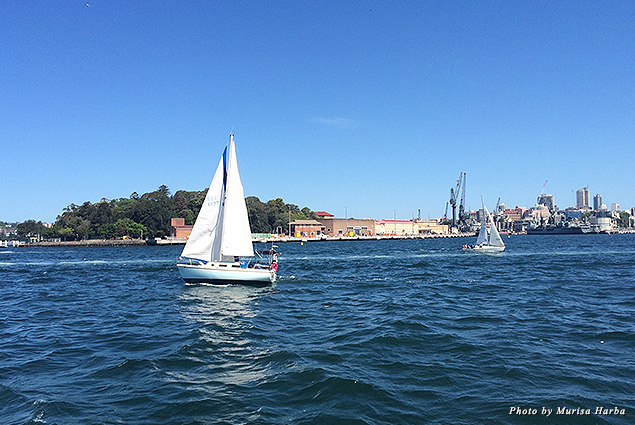 Hoping to avoid the crush of passengers back to Sydney, we left before sundown, returning to the Intercont. Our concierge was waiting with a “surprise” reservation for dinner. (He followed our instructions perfectly: “Find us somewhere with incredible wine that no one knows about.”) The Museum of Sydney sits across the street, and this summer (Australian winter) the museum opened its flagship restaurant, The Governor’s Table. Inlaid ranch-style across the bottom floor of the museum, the Governor’s Table provides a modern contrast to the history of the museum above. Dining early due to jet lag, we had the whole restaurant to ourselves and the service was legendary. Our sommelier fed us a steady stream of wine pairings, watching and enjoying as our oenophile palettes discovered new favorites. A dry Shiraz, not normally our go-to, stood out with the lamb course, while our Semillon with dessert was exceptional.

Day three found us relaxed and watching rush hour over breakfast. Our adventurous bonafides earned over the weekend, we decided to retrace the steps of our youth, crafting a self-guided walking tour through our old haunts. Our trip to Sydney would not be complete without a walk down George Street, the heart of Sydney’s Central Business District that bisects the city before ending in newly gentrified Redfern. Starting from the Intercontinental, we gazed up amongst Sydney’s skyscrapers through a sea of suited worker bees and impossibly tan joggers out on their morning runs. We reached our first destination quickly: the QVB.

Opened in 1810 by Sydney’s Governor Macquarie, the Queen Victoria Building has undergone many transformations in two centuries: office building, concert hall, city council, and, most recently, shopping arcade. Walking through the antique structure felt like stepping back in time to Queen Victoria’s Diamond Jubilee. Upscale restaurants, cafés, and stores not found anywhere else on the continent got progressively less affordable as we ascended the building’s four floors. Reaching the top, we were surprised to find The Tea Room, a fully restored Victorian tearoom hosting daily service. With no schedule, we indulged in a lightly caffeinated stopover, something we would never give ourselves the chance to do back home.

We continued down George Street toward its natural end by Sydney Central Station, the hub of train travel for the state. This was Redfern, our old neighborhood, and while not much had changed in the lead-up, Redfern was being torn down to make way for million dollar condominium buildings. Keep an eye on this once working-class area undergoing a radical transformation into something much more cosmopolitan. We dined at Oporto, our favorite Portuguese-inspired fast food chicken—with all of the razing and reconstruction, it might have been our last chance (though in truth we know there are still dozens of other locations around the city should this one go away).

The next day was our last in New South Wales, and we rose that morning with more urgency to see the final few “must dos” we agreed upon when making our urban adventurer pact. A gentle rain fell at Bondi Beach, normally the bustling lifeblood of eastern Sydney but empty on this dreary weekday. We strolled through the beachy local shops and cafés less on a mission and more to celebrate our puppy, Bondi, named after this area. Back home, people call him “Bonzai,” “Bondee,” and “Bodhi”, so we took every chance we got to talk to the local shopkeepers and café-goers who totally understood our plight. The coffee and salads at Porch & Parlour were perfect—had we stayed for dinner, the wine list would have been perfect, too. 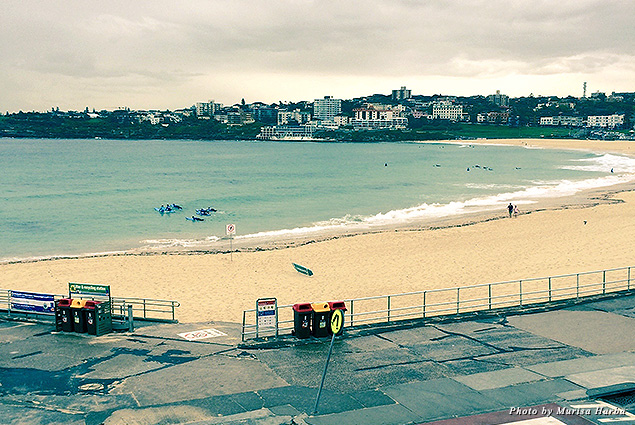 But there were appointments to keep, so we Ubered from Bondi to the home of an old friend, trading stories of what life had become since we last saw each other. For them, “everything” had changed, except from our vantage point nothing had. This was Sydney, an alternate universe where we began our careers and time was frozen. Soon, however, we fell into the trap, removing our explorer facades to reminisce on old times, blurring the lines between tourists and locals, twenty-somethings, and proper adults.

Arriving for the last time to the Intercontinental, we passed a group of giggling teenage girls camped out and waiting for Miley Cyrus to emerge from the hotel. Jealous of their energy, we stepped inside and fell asleep. The Great Barrier Reef awaited and a new adventure was about to begin.