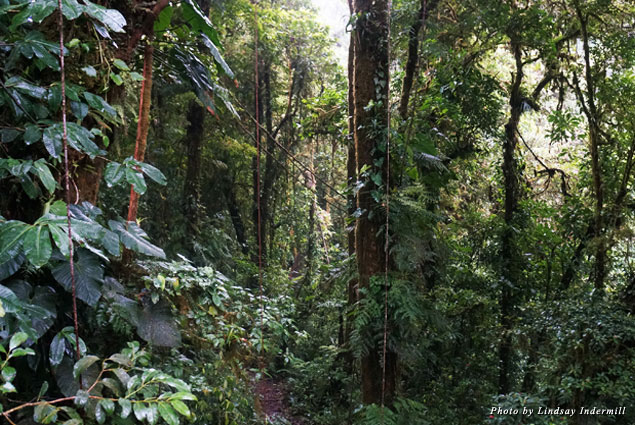 A seasoned traveler for work, I rarely make the mistakes of a greenhorn jet setter, yet on this Costa Rican expedition there were two: the first was the sewage, the second was the pineapple.

Before things got ugly, the trip was beautiful. My boyfriend and I flew to San José, where we picked up our Vamos 4×4 rental car. Some blogs try to dissuade from renting a car altogether, and though you could take a shuttle/bus/taxi/airplane across the country, a huge combination of time/money/freedom would be lost. We rented a RAV4 with GPS for nine days and, famously true to their word, Vamos charged us the exact $650 they had originally quoted.

After the initial shock of a chaotically open, lane-less highway, we found the relatively mellow road that wound north to our first stop, La Fortuna. My biggest driving disclaimer stems from this leg of the journey: the roads are only mostly paved, the fog can be dangerously thick, and big trucks fly around the mountains with the expectation you are driving slowly. It is, at times, terrifying. However, this isn’t some open, trans-American desert road trip; this is a surreal fusion of an Eden-like oasis dotted with makeshift homes that look like “District 9” sets. Kids look out from their brightly painted porches, and old people sell mamóns on the most random stretches of highway. (How far do these people walk to set up makeshift tarp storefronts?) It’s a humbling glance into a stranger’s world and a welcome confirmation you’re definitely not in Hawaii. 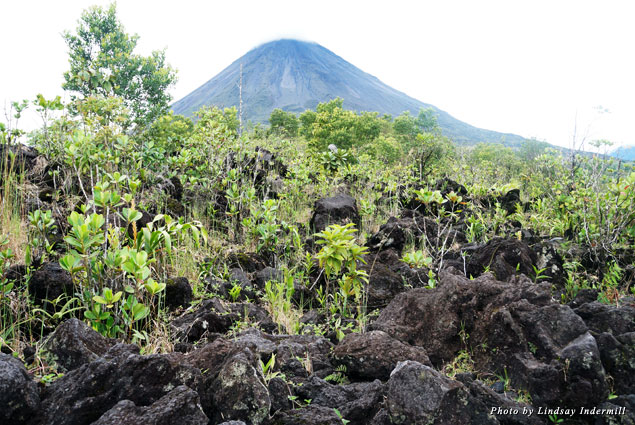 We spent three nights in La Fortuna, which sits at the base of the active Arenal Volcano. The Hotel Campo Verde ($80/night) was a dream; the small, private cabins were affordable, clean, and nestled at the base of the volcano. Sodas are the most common type of Costa Rican eatery as they’re generally inexpensive and proudly serve casados or “typical food,” as they call it. Typical food consists of rice, black beans, plantains, some sort of protein, and a small salad. The first few casados in Arenal satisfied our appetites and were mildly exotic, but if I never see a fried banana on a rice pile again, it will be too soon. During our time in Arenal, we traipsed the hanging bridges ($24/person), hiked the lava flow path ($10/person), and dipped in the thermal pools ($15/person), but by far the greatest expedition was horseback riding to a swimming hole at the La Fortuna Waterfall. 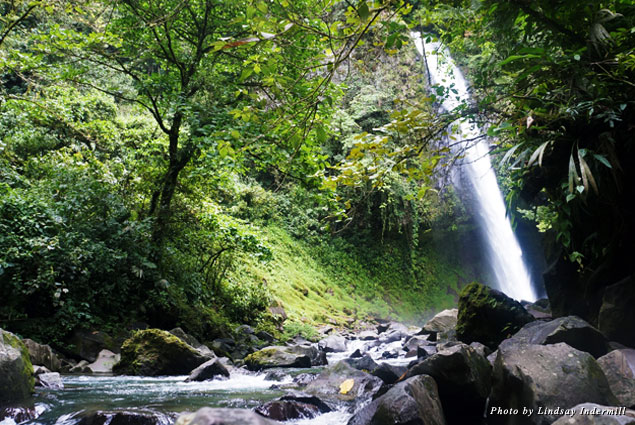 For $50, four hours, and sore haunches, we rode through the jungle to a trailhead over the creek, then hiked down haphazardly designed steps to the jade-blue natural pool at the base of the waterfall. It was bliss.

The drive from La Fortuna to Monteverde traces along the northwest edge of Lake Arenal. Monteverde, our home for two nights, is the lush heart of the rainforest, known for exotic highland animals and feared for the fiercely potholed roads that connect it. We scaled the mountain with enough time for a guided night tour ($23/person). 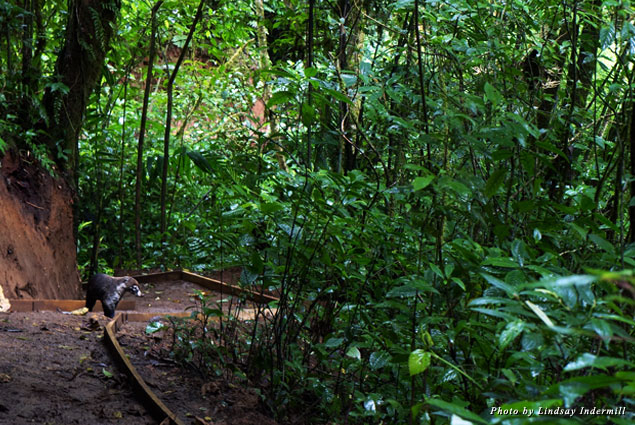 It was extraordinary; led by flashlights and an English-speaking local we spied on sloths, sleeping toucans, a quetzal, a Three-wattled Bellbird, an Oil Bird, and tropical raccoons. Our hotel, the Arco Iris Lodge ($67/night), was connected to the tiny triangular town by a long driveway but was still removed enough to preserve some serenity.

Those who have traveled to Monteverde have all likely done so for the same reason: the final cable of the zip-lining canopy tour in the Selvatura Park. A kilometer long and nearly equal in height, the flight over the rainforest is unparalleled—unless you’re a toucan. 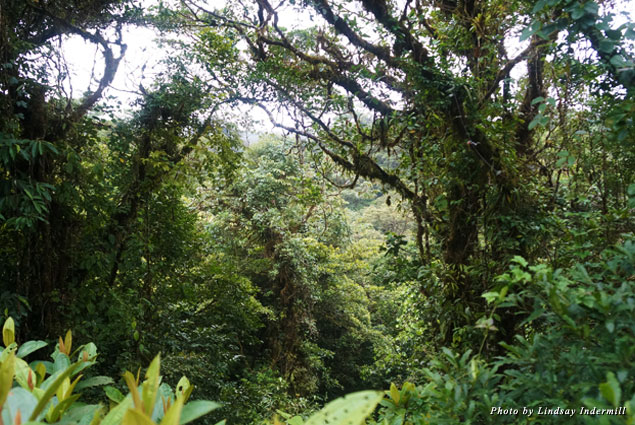 Our final stop was Tamarindo, a surf-centric Pacific village at the top of the peninsula. Though we researched each of our hotels through Airbnb, we had actually booked the first two directly through the hotel sites. The third was a private condo with only one glowing review from a past occupant. Thus, my first mistake: I trusted the photos of a clean condo and skimmed over notes about “completely green units” (how progressive!). Imagine our terror when we saw walls marked with mud (please God, let it have been mud), bugs in every corner, and a note over the toilet warning to “put ALL toilet paper in trash can.” Like a nightmarish montage, all the signs boasting “eco-friendly” blurred together with searing irony. 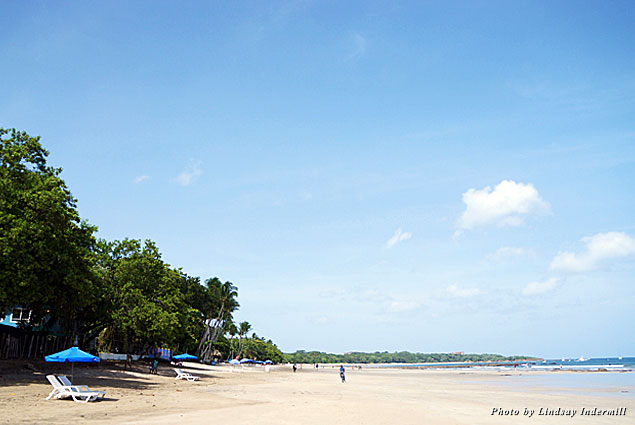 I walked into several promising hotels and villas along the water, eventually falling for the seduction of the complimentary breakfast buffet and rum-filled coconuts of the four-star Tamarindo Diria. The beachfront suite was only $50 more a night than the condo we escaped, but truly, there is no budget for a fully flushing toilet.

We took a $24 estuary tour up the river mouth, where we spotted crocodiles and howler monkeys, and where I made my second grave error: eating sliced pineapple that had been floating in our captain’s cooler all morning. “Don’t drink the water” is easy to remember, “don’t eat anything that’s been in water, even if you’re just trying to be polite” is a little different. That pineapple was the harbinger of the end of my vacation, even though my boyfriend was able to enjoy one more day of surf. (I stayed on the beach, fearfully feeding bananas to iguanas while curled in a fetal position.) 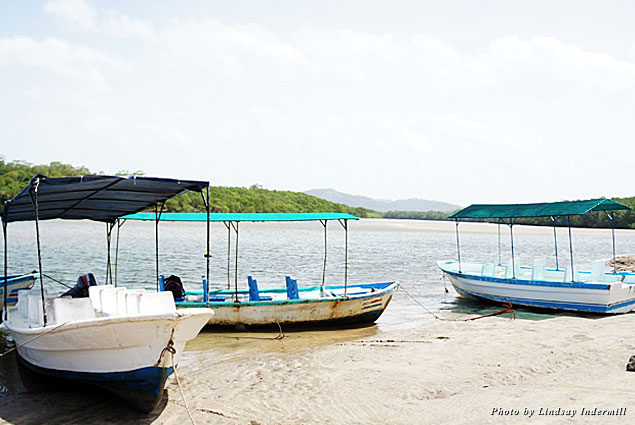 Costa Rica is seeping with tourists, but only the best kind: people who are considerate, eco-savvy, and ready for adventure. Join them. Practice your Spanish. Rent a car. For the love of all things good in this world, research the sewage situation. Travel with the flexible balance of both spontaneity and scheduling, and decline, by all means necessary, a piece of the floating pineapple.