Suite, Suite Vegas at The Palazzo 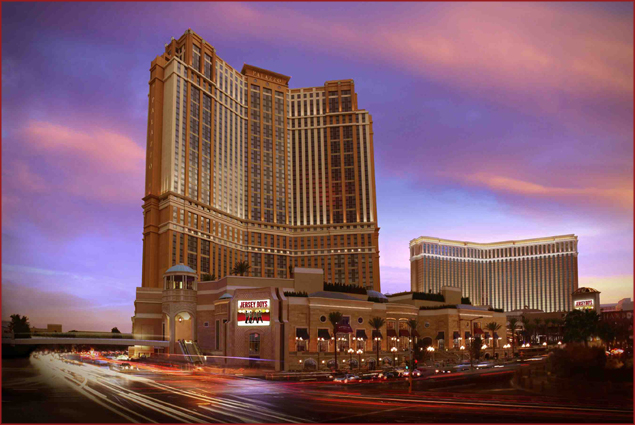 Anyone who lives in LA simply has to take a Vegas roadrip. It’s like a right of passage. Remember Swingers? On a good night, it can be a four hour drive (OK, I drive fast!) and then suddenly—you are in Sin City. If the lights of Hollywood aren’t enough for you, Vegas will satiate even the most bling-hungry. So when my friend and Hollywood trainer Erin Lanahan told me she had never been to Vegas… it was my duty to initiate her!

I’m a bit late in posting about it, but we headed out to the desert for 4th of July. Given that scenario, hotel choice would be very important because just like New Year’s or any other really busy time in Vegas, you may not want to leave the property. The Strip gets THAT insane. Plus the desert heat? Not for everybody. And by everybody, I mean me. So we chose the Palazzo. The suite was… sweet! A sunken living room featured a modern European design (this is the more modern sister to the Venetian property, and the two are attached). The beds boast luxurious high-thread white sheets and ornate headboards. And the large bathroom featured a separate bath and shower and YAY! A vanity area. Of course I’m biased and think it would be even more amazing with a Vanity Girl Hollywood mirror, but I digress. The high-tech window treatments offered True Blood-worthy sunlight blocking, perfect for sleeping in. Of course, anyone who knows me will tell you one of my favorite things in the world to do is to lay around in the sun, take a shower and then crawl into luxurious white sheets for an afternoon nap. This suite was perfect for this favorite indulgence of mine.

And speaking of indulgences? How about dinner at Sushi Samba or Mario Batalli’s Carnevino. Appetizers and drinks at Lavo is a great way to kick off an evening. And of course, what kind of Vanity Girl would I be without a workout and massage at the AMAZING, award-winning Canyon Ranch SpaClub.

During my last Vegas weekend trip (May 2010), I met up with celebrity makeup artist Kenetia Lee at Planet Hollywood with for the Miss USA Pageant. That property was a different type of Vegas… equally fun just very different. So I say that Palazzo is your choice if you want an elegant, luxurious Vegas trip. Kenetia is headed back to Vegas in August for Miss Universe so I may just have to take another road trip.

And speaking of makeup? I might say that Vegas may have beat Hollywood for witnessing women teetering around in high heels and little black dresses. (You can wear jeans for a night in Hollywood, but that’s a whole ‘nother post).

So the perfect Vegas makeup is a must… and I’ll be checking in with some of my favorite celebrity makeup artists to help make sure that your makeup is on point too! Stay tuned…